Colourblind will make you feel something

Lead singer of Colourblind Finn Cameron digs into the darkest moments of his life to give you songs to shout along to. 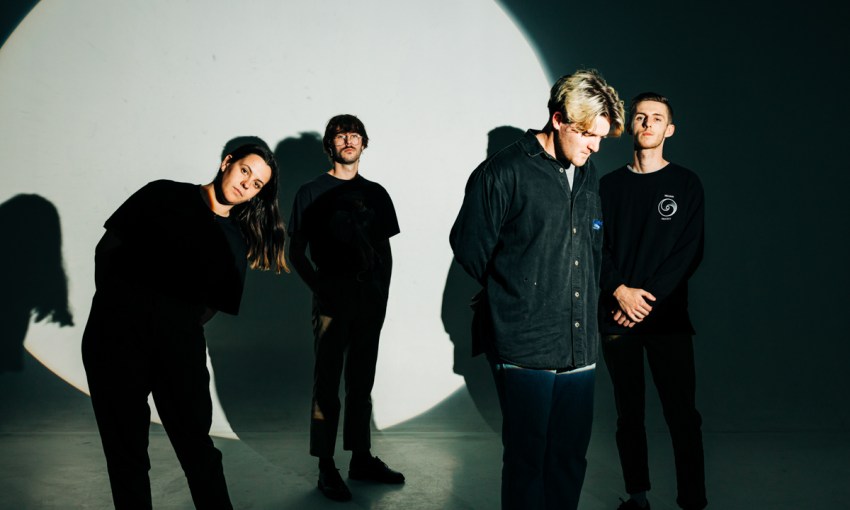 It’s the aim of any musician to make their audience feel something.

Some might make a melody or chord progression with the hope of raising hairs on the back of a listener’s neck, others might feel a rush seeing a dance floor fill or the front of stage flood at the first notes of a song.

Finn Cameron, lead singer of alt band Colourblind, is happy if he can make his audience “feel anything”.

“That’s all I want to make happen,” the songwriter says, “because that feeling of being at your favourite band’s show, and them singing that song that you’ve been listening to by yourself for the last three months and connecting with, it is genuinely a special and magical moment.”

Since its inception, Colourblind has been a journaling project for Finn, who digs into his personal life to provide listeners the opportunity to feel as he’s feeling.

Colourblind debuted in 2017 with a three-track demo. It was the band in embryonic form, but the most identifiable elements of its sound could already be heard: swelling, anthemic rhythm, and Finn’s emotional exposure delivered in a mix of melodic singing and emotionally strained screams.

One track from the demo, ‘Weather Song’, later appeared on the band’s 2018 EP, Move Like You. The song explores themes of depression, as does the record, which has stories of troubled relationships and feeling different from the people around you.

Every emotion Finn conveys on the record is felt ferociously and delivered with urgency. This hyperbolic state of feeling connects Colourblind to a lineage of emotionally driven music that stretches back decades.

‘Emo’ has long been a caricature as much as a genre, and, even when used in earnest, it has been an umbrella under which many related but disparate sounds can be found – hardcore, pop-punk, metal, et al.

Finn first started engaging with the music style after coming out from under the influence of his older brother, a Parkway Drive fan. Less into the machismo of metalcore, Finn discovered bands like Basement, Citizen and Title Fight, who write emotional songs without going into “whiny emo” territory, he says.

“It was grungier and tougher,” Finn says of Basement. “I love a bit of whiny emo as well, but I think that’s why I got into them first. They were the gateway into the heavier kind of band.”

As Colourblind picked up gigs around Adelaide, they hoped to become part of a burgeoning melodic hardcore scene. “Bands like Reactions and Hindsight and Sleep Talk,” Finn says. “That’s kind of what we were gunning to be a part of.”

On Move Like You, Colourblind hit many emocore conventions: the rhythm is furious, guitars caustic and lyrics deeply wrought. It is a record fuelled by youthful energy and heavy emotion, and it was important to Finn that his writing honestly reflect his experience of depression, suicidal thoughts and use of anti-depressants.

“I think it’s really important to just be open and honest to talk about these kind of things, because it’s the only way that we’re going to make any kind of change with the accepting of these issues going forward,” he says.

“I’m not sure if, on a political front, I’m trying to make any points with any of this, I think it’s more about connectedness with other people, and just wanting other people to relate to it.

“It made me feel a lot less isolated as a younger person, especially when you find that song that is so weirdly specific but also lines up exactly with the situation you’re going through.”

On Friday last week, Colourblind released its second short-player, titled Semaphore. Recorded in mid-2020, the work also checks many of the aforementioned conventions, but it’s a noticeably more mature collection of songs. “If the first [EP’s] about being 17, 18, Semaphore’s about that period of 18 to 21, when I wrote it,” Finn says. “I’ve grown up in Semaphore Park, and [the EP] is definitely directed around me being a little bit younger, and it’s more reflective of that time.”

Musically, both the chord progressions and Finn’s melodies and phrasing are more complex, and he chooses more artfully when to employ a scream, rather than going to an emotional 10 by default.

Semaphore also differs from its predecessor lyrically in the occasional stream of sunlight Finn allows to filter through the clouds. It’s the same voice present on Move Like You, but from a new perspective – one that has made it through the wiles of teenage mood swings and can now look back at earlier years with bittersweet nostalgia.

The record opens sweetly with ‘Swing Me Off My Feet’, about the lightness of new love, but darker subject matter follows. On the second song, the EP’s title track, Finn finds double meaning in semaphore, referencing the flag signalling system, in a story about watching a friend struggling, possibly with substance abuse, and in need of help: Use your arms/I swear I’ve missed your/cry, your voice, semaphore.

Even when he returns to hyperbolic themes, like the outsized emotions of unrequited love, Finn shows a refreshing maturity for a musician operating in an emotionally driven genre. Punk rock, and all of its associated offshoots, including emo, has always needed an enemy, a target for the brash spite and bile – be it your parents, boss, ‘The Establishment’, or a current, former or desired-but-never-to-be romantic partner.

When he does have a target in his sights, as on ‘I Guess That’s It’, Finn partners with Colourblind bassist and vocalist Bernadette Wright to trade differing perspectives on a failed love.

There’s obvious catharsis in shouting out a person you feel wronged by, but on Semaphore Colourblind instead jumps ahead to the transcendence of looking back with an objective eye, acknowledging your own flaws and perhaps learning how to act better next time.

This follows Finn’s philosophy in songwriting. “I think if it’s about yourself, go your absolute hardest,” he says. “I think if you’re going to write a song about an experience about another person, I think that you need to change a couple of details so it’s not so obvious that it’s about them, because I just don’t think it’s fair to be capitalising off someone else’s misfortune or someone else’s mistakes in the past.”

This maturation could partly be due to a function of getting a little bit older, but Finn says his writing process did change between the release of Move Like You and beginning Semaphore.

“I can actually pinpoint the exact moment I decided I wanted to actually work on my craft as a songwriter,” he says.

“I watched a documentary about the band Oasis, called Supersonic, and… I just absolutely fell in love with their songs and with Noel [Gallagher]’s standpoint of writing songs, where he’s just trying to write global songs that anyone can listen to and identify with.

“I’d never thought about songwriting in any kind of sense other than it’s what I write when I’m sitting here with my guitar kind of thing… just fishing for songs.

“I got blown away by the creativity behind a lot of the songwriting. I think that naturally shifted into me being a lot more careful, a lot more thoughtful about the things that I was going to write.”

But this honing of craft is only adding new layers into Colourblind’s work. Finn already discovered early on the key to creating songs people can identify with: unflinching honesty and authentic expression.

“I just feel like the best way to evoke those kinds of feelings for people in the audience is if you believe it,” he says.

“It’s so easy to believe the struggles and things you’ve been through, especially if you’re considering them like a re-read through an old journal that you wrote. It brings up emotion for me on stage, and it makes it really easy to project that into the crowd when it’s genuine things I have felt.

“There’s a massive sense of catharsis for me, and also, every single time I get to perform them on stage and see people connect with it, it’s just an amazing feeling to know I’m capable of making other people feel the way that bands made me feel when I was 17 years old.”

Semaphore, Colourblind’s second EP, is out on streaming platforms now. Recent single ‘Soak’ is available to stream or purchase on Bandcamp, along with the band’s entire back catalogue.

Colourblind is embarking on a five-date national tour throughout August in support of Semaphore, kicking off with a hometown show at the Lion Arts Factory on Friday, 5 August. Find out more here.