As part of Feast Festival 2020, CityMag takes a tour of South Australia's queer history with our guide Dr Gertrude Glossip. 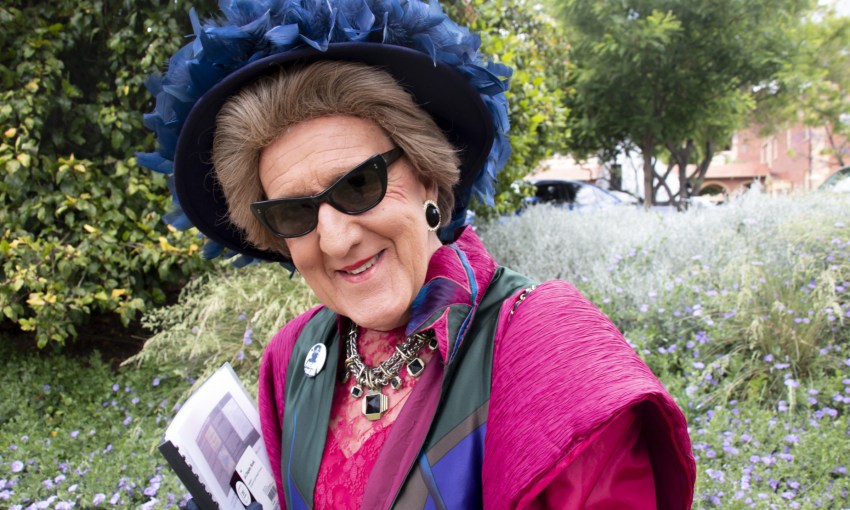 On a Thursday morning, CityMag meets Dr Gertrude Glossip on the banks of the Karrawirra Parri River Torrens, near the University of Adelaide.

We’ve met nearby where Gertrude’s alter-ego, Will Sergeant, first began his own exploration of gay life and culture.

Feast Festival
7—29 November
Some events have been cancelled, but there is still plenty of Feast Festival to see this weekend.
Browse events here.

This was at a time in South Australia’s history when homosexual acts were criminalised, and to be found out as a gay person was to be in a position of genuine danger.

This reality was made brutally clear to the South Australian queer community in 1972, with the death of law lecturer Dr George Duncan.

Today, the statuesque Gertrude wears mostly red silks accentuated by pops of navy, with most of her garments sourced from “Opportunity Emporiums”, aka op-shops, and OAFs, meaning Old Adelaide Families.

In cobalt gloves, Gertrude flips through a portfolio of information put together for Feast Festival. She tells us she’s been a part of the event since its 1997 inception.

“Initially it was called a celebration of lesbian and gay culture, but then, due to the other members in our rainbow family, that was a bit limiting. Then they used the word queer.”

This year’s Feast Festival runs from 7—29 November and includes over 100 artistic and cultural events, all of which celebrate queer culture and history.

Gertrude, who’s conducting two tours this year, believes the festival is important because it proudly showcases those in LGBTQIA+ communities, allowing the community to share their stories – to each other and to a broader Adelaide audience.

When Feast Festival launched in 1997, it was well received, Gertrude says, contrasting against the reception of Adelaide’s first Pride Parade, in 1973, which occurred, again, when homosexual acts were criminalised in the state, and in the shadow of George Duncan’s death.

“Again darling, I’m responsible for that march too,” Gertrude says, referring to Will’s participation in the event.

“Will was… in the first Pride March in ’73. He carried a big banner. He was also in the first Mardi Gras in Sydney, when it all went rotten and the police attacked in Darlinghurst Road.

“There’s no doubt that since then it’s a much freer, better world.” 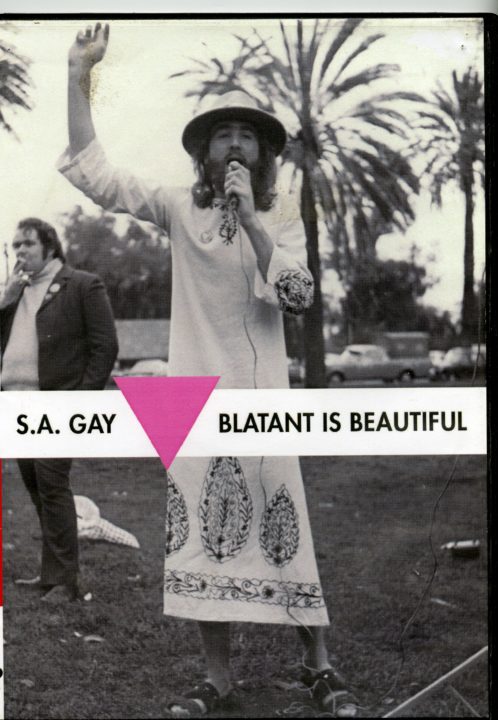 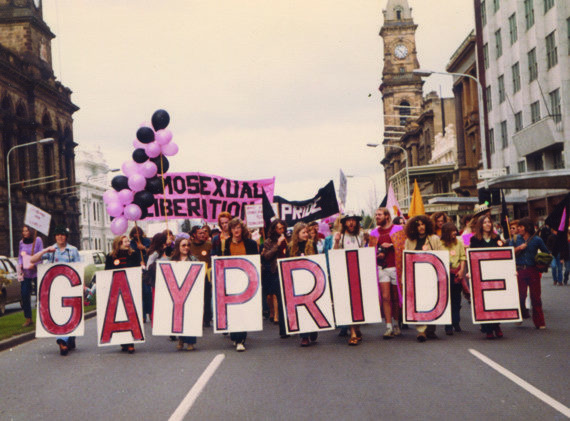 Above: The first Pride March was held in 1973, which didn’t happen again for 30 years. The walk has been an annual event since 2003, except this year, due to COVID-19. Credit: SA History Hub; Right: Will Sergeant has been an activist since the ’70s as a member of the Gay Liberation Front, which fought for queer rights in SA. This image Supplied

Her first tour was with colleague Ian Purcell in the late ‘90s, who co-ran the Uranian Society, a social group named after the 19th century term referring to homosexual men. This event was also the genesis of the Gertrude persona.

“We took a busload of gay men on a guided tour of the secret hidden gay history of Urania [in rural South Australia]. It’s all fabricated but it was fun,” she says.

“We invented Gertrude for that walk. When Feast started in ‘97, one of the artistic directors said, ‘Oh, could we have a gay history walk?’ and we said ‘Yes, let’s use Gertrude.” 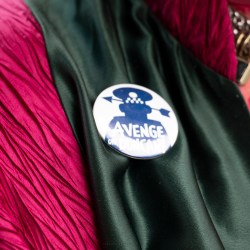 Though no convictions were ever made, three South Australian vice squad police officers were implicated in the death of George Duncan

As Gertrude talks to CityMag, she adjusts her outfit, tinkering with her black cat-eye sunglasses balancing on her nose and a badge pinned to her scarf, which reads ‘AVENGE DR DUNCAN’.

Most of Gertrude’s Feast tours touch on the death of George Duncan.

“Beats have always been associated with some danger – vice squad [police officers] would come down here and throw people in. And it was always a bit of a joke. Give poofters a bit of a scare: ‘It was a robbery, it was something else. It wasn’t a hate crime,’” Gertrude says.

The tours also touch on contemporary issues, such as the impending revocation of the gay panic defence.

It’s been almost half a century since Will Sergeant, a “flamboyant boy” from rural South Australia, started participating in queer life in Adelaide.

Will was teased in school, not very good at sports, and eventually, as an adult, tried gay conversion therapy to “stamp down” his homosexual orientation.

When we ask Gertrude if coming out has become any easier for South Australians in the current era, she shares another story stored up her silk sleeves. 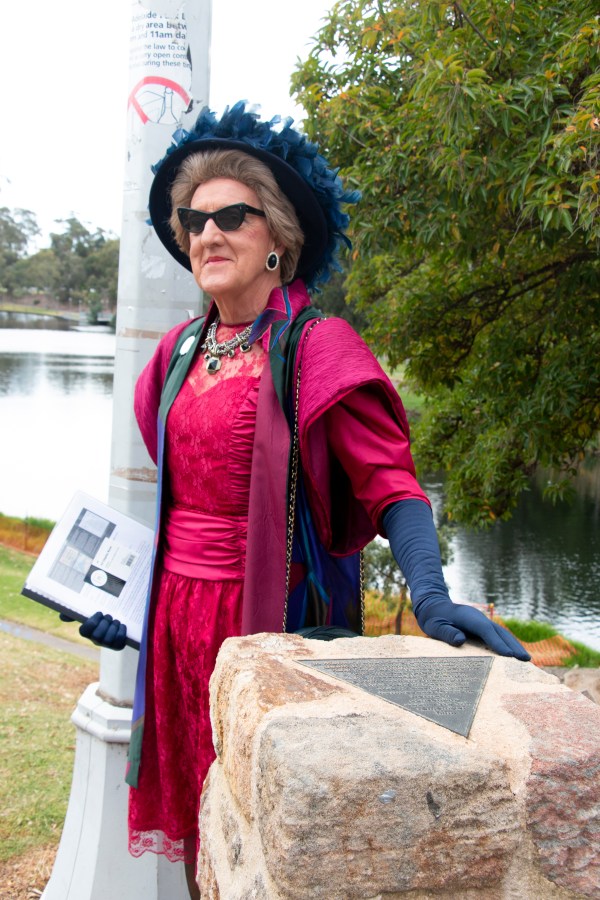 Dr Gertrude Glossip standing next to the memorial of George Duncan, beside the Karrawirra Parri River Torrens

“This relates to someone Will knows: a child who’s 14 and lives in rural South Australia,” Gertrude begins.

“And this woman, a friend, became aware that her son was doing a lot of stuff online, and she asked about it.

“But there’s another story: Will went to the podiatrist the other day and spoke to a woman in her 40s.

“We were talking about gay history, and this woman said ‘Oh, my 14-year-old daughter is very connected to the LGBTQ community. She goes to Glenunga High and they have a social group. And she identifies as non-binary.’

“And so I thought, there are two stories. One shows this could be really still tough in rural South Australia… and then the 14-year-old at Glenunga High that feels free to be who she is.”