Feast Festival has dubbed this month “Pridevember”, as SA’s annual queer arts and culture celebration casts a rainbow over Adelaide. Here are 10 ways you can join the party.

Billing itself as South Australia’s first multi-arts and cultural festival to proceed since COVID-19 hit, Feast Festival launches this Saturday with a line-up of more than 100 events.

“We have collaborated with other South Australian arts and community organisations, which has also enabled more people to participate, which is fantastic,” Feast CEO and general manager Helen Sheldon said at last month’s program launch.

“Honestly, so many people have just assumed Feast wouldn’t happen, so to see the LGBTIQ+ and ally communities rally together for the festival, and with a pandemic, we have collectively created one of our biggest programs yet!”

The usual opening-weekend Pride March won’t go ahead, but there are plenty of comedy, live music, theatre and literary events, as well as talks and community happenings. We scoured the program to select 10 highlights, which you can browse below.

Feast’s opening night party has been replaced, due to COVID, by a twilight quiz, on 7 November, in the Migration Museum courtyard, which will be transformed with a bit of glitter and glam into the Feast Festival Flamingo Pavilion. Grab some brainy mates and head along for a night of hilarious quiz questions, games and cabaret-style fun, hosted by comedian Lori Bell, with virtual guest appearances by Christian Hull (below) and “real housewife” Gamble Breaux.

This is the first sketch of a new work that combines the art of drag, Pacific-contemporary dance, physical theatre and singing to explore the emotional limitations of gender roles inherited by Western patriarchy. Brown Cissy Boy (13—14 November, The Odeon) is performed by Haus of Kong’s Thomas Fonua, with the program noting: “Perhaps if tearful boys were comforted instead of shamed, there wouldn’t be so many angry men struggling to empathise with emotions.” Amen to that.

More than 100 stories were created over just 10 weeks for Decameron 2.0, an innovative iso-inspired digital project by State Theatre Company SA and ActNow Theatre involving a diverse collection of contributors. During Feast, on 27 November, a selection of the filmed monologues created by South Australian queer writers, actors and directors will be showcased in a special 75-minute screening at Palace Nova Cinemas.

Picnic in the Park

With stalls, street food, queer craft, a drag fashion show, the “tug of peace” and the ever-popular dog show, Picnic in the Park is a perennial favourite on the Feast program. This year’s event will be at Pinky Flat Tarntanya Wama on Sunday, 29 November, to be followed by after-parties at Mary’s Poppin, Sparkke at the Whitmore and the Austral. Don’t forget to take your pupper (to the park, and maybe the pub).

We love any excuse to venture into the tunnels of the old Treasury building, and Queers Underground (17 November) promises an “atmospheric evening” of poetry and spoken word from Adelaide’s well-versed queer youth. Other Feast writing and poetry events include Write Blak, an evening of Aboriginal and Torres Strait Islander LGBTIQ+ poetry, song, comedy, storytelling and spoken word, and fast-paced storytelling event Rapid Fire.

How to Kill Your Hamster

This is not a workshop. It’s a dramedy, being presented by Rumpus Theatre in Bowden over 11 nights. How to Kill Your Hamster centres on Carrie, Charlotte, Samantha and Miranda (those names ring any bells?), who live in a share house in Thebarton with Ham, “a sensitive-good-guy who also happens to be a guinea pig” and rescue dog Fran Fine. Expect “a surreal voyage into the heady Millennial seas of birthdays, relationships with each other, with men, and with themselves”. 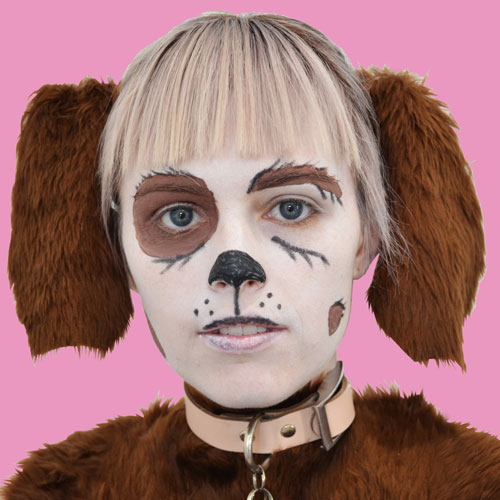 This landmark play by American Martin Sherman explores the Nazi persecution of LGBTIQ+ people during the Holocaust. It traces anti-hero Max’s nightmare odyssey from a Berlin nightclub, via cattle-car, to Dachau, where he falls in love with a fellow prisoner. Adelaide’s Independent Theatre is presenting Bent at Goodwood Theatre from 13—21 November.

Head to Sparkke at the Whitmore on 14 November for this triple-header: Darwin singer-songwriter Emma Rowe, whose compositions span “moody rock to lofty pop melodies and catchy choruses”; Adelaide powerhouse rockers The Vains; and The Prophets of Impending Doom (“10% alternative, 40% ska-punk, 50% cowbell, and 100% good times”).

Transphobia and Other Irrational Fears

What’s so scary about transgender people? That’s the question at the heart of Emma Smart’s performance at Diverse-City (16 November), which takes “a darkly comic deep dive into the strange and surreal world of transphobia to discover just what’s freaking them out”.

Flamboyance – The Return of the Gay Hooker

The Gay Hooker ­–  aka fibre artist Richard Boyle, known for his crocheted dolls based on queer icons – will have you in stitches with Flamboyance at the Adelaide City Library. Flamboyance is an exhibition of crocheted flamingos, with the public invited to join a workshop on 13 and 19 November. For those of a crafty bent,  Feast also includes Queer Stitch and Resist workshops, and a Queer Crafternoon and Basket Making event.