Recently appointed Deputy Lord Mayor Mary Couros tells CityMag although local government can at times feel “toxic”, if her position sends a message to young women they too can have a career and hold power, “that’s great.”

“This is the first time in more than 20 years we have had both a female Lord Mayor and Deputy Lord Mayor,” Lord Mayor Sandy Verschoor anounced in a statement, “and I look forward to working with Mary as Council works hard to support our community and our businesses to recover from the impacts of Covid-19.”

CityMag is spending time getting to know our city’s councillors.

As part of CityMag’s interview series getting to know the city’s councillors, we met with Mary to speak about her role within local government, which she describes as “challenging” but something she is passionate about.

“I have been running my business (In2 Real Estate) for a long time. It’s been 20 years. And I worked overseas in Singapore for five years. I was a marketing manager there and I came back and opened up my business, but… change comes from leadership. And no matter how much I felt that as [much as we were] a capital city, we weren’t growing.”

Mary started a career in real estate two decades ago because it gave her the ability to work from home while caring for her young son and daughter.

She campaigned in the 2018 city council election to fill the North Ward seat on a platform of growing the city’s population, bolstering economic growth, strengthening culture and promoting sustainability. But her introduction to local government was rocky.

A local resident threatened legal action against the then-candidate, arguing Mary had a tenuous connection to the North Ward.

She disputed this at the time, and in an interview with The Advertiser described the criticism levelled against her as gendered.

The Deputy Lord Mayor tells CityMag she has a “key stake in the precinct” through the businesses her de facto partner runs: Ruby Red Flamingo, Tony Tomatoes and now L’italy; as well as her own business, In2 Real Estate, which is also located in the precinct.

“In 2018, I felt that the main streets of North Adelaide hadn’t been given enough attention,” Mary says.

“I felt that we needed a lot more consideration for the small businesses in the area, and in my knowledge of real estate, your main streets are the backbone to the area.”

The trouble continued once Mary was elected. Just six months into the council term, InDaily reported on an instance of physical intimidation and verbal abuse between Mary and veteran councillor Anne Moran. Councillors described the meeting leading up to the exchange as “a horror show” and “a bit like The Exorcist.”

The tenor of the debate within the council, and the reporting that flowed from it, was concerning not only to Mary, but to her family.

“Let’s be realistic. I don’t agree with Rob’s [Simms] policies. I’m not a Green and I never will be a Green.” 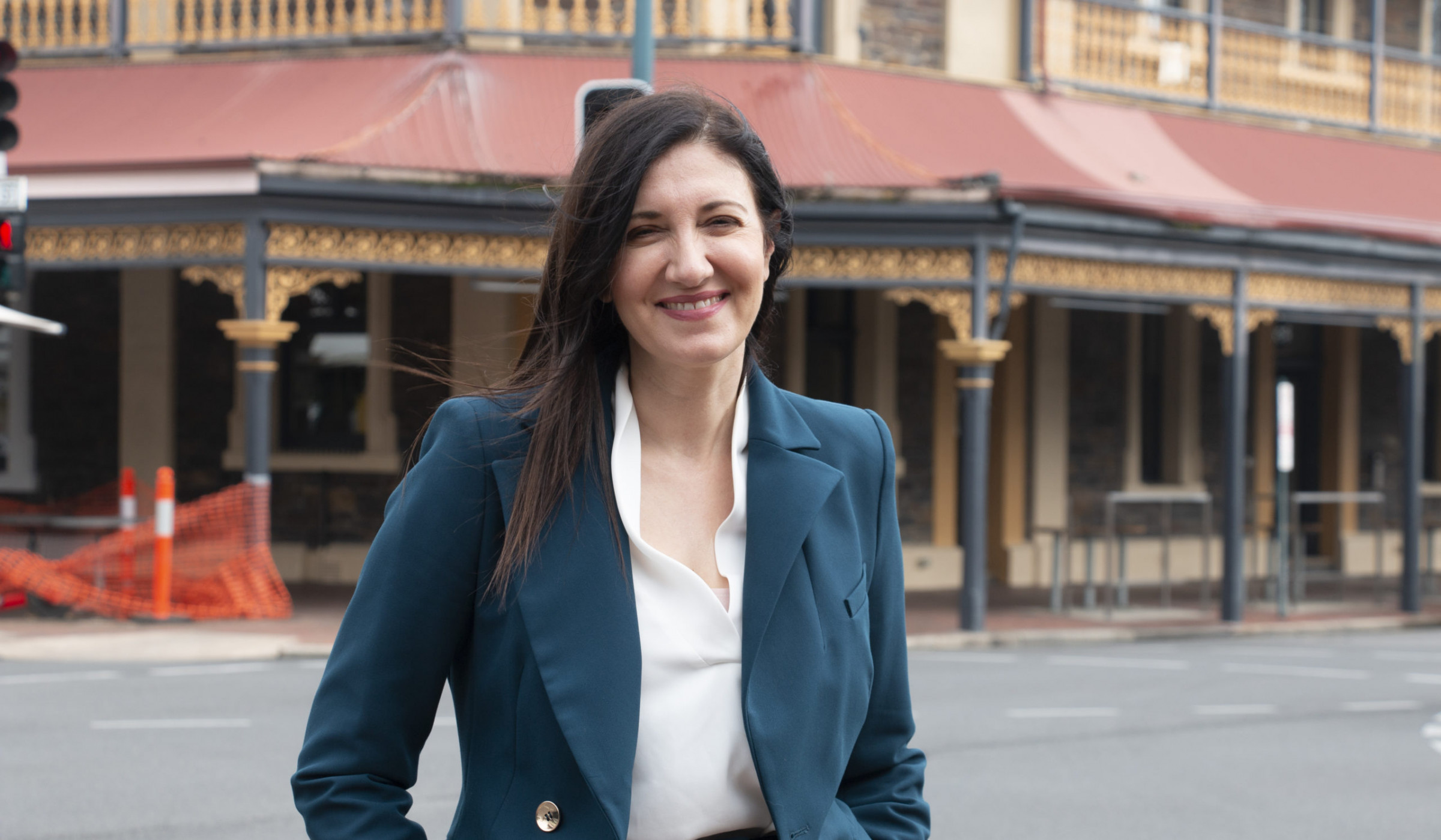 As a young girl, Mary worked in her parent’s Waymouth Street deli C’est Ci Bon and often spent her school holidays peeling potatoes. As the English-speaking daughter of two Greek migrants, she was often their interpreter and was tasked with collecting money from renters on her family’s property.

Because Mary spoke English and her parents didn’t, she would also be the one to interpret and absorb racist remarks directed toward her family.

“I wouldn’t change it for the world though,” she says, “because it toughened me up and it made me feel that I can do anything.

At the beginning of Mary’s council career, she introduced a motion that combined two of her political interests: business and multiculturalism. The idea was for City of Adelaide administration to investigate the feasibility of a multicultural hub located in postcode 5000 – a facility that would operate as a meeting place for different working migrants. COVID halted those plans.

“We don’t have a very big migrant community compared to Melbourne. But knowing that bubble will burst in Melbourne, creating a multicultural hub in [the] city will welcome migrants. That would have been a great opportunity,” she says.

An ongoing theme running throughout this council term has been the existence and influence of a right-leaning faction known as Team Adelaide. Some within the faction acknowledge its existence but downplay its influence in council operations, while others deny that it exists.

Mary – who, through our own reporting and that of InDaily, we have identified as a Team Adelaide member – is of the latter camp.

Members of the dominant voting bloc often describe themselves as “like-minded individuals who just want what’s best for Adelaide.”

CityMag has reported on the influence of Team Adelaide in bringing into being Jessy Khera’s Driver’s Month, and its role in delaying and risking the completion of the proposed east-west bikeway. In both instances, Mary has shared the opinion of the other members of Team Adelaide.

Still, she finds the affiliation frustrating.

“[Rate-payers] know that when I am passionate about something, they know it’s [from] me. And then when they read [media reports], it doesn’t sound that way.

“I see myself aligned with a group of people, and we see ourselves aligned with the same philosophy in where we see the city growing…

“Let’s be realistic. I don’t agree with Rob’s [Simms] policies. I’m not a Green and I never will be a Green.”

In light of the challenges of the chamber, Mary is proud of the gains she’s making – such as the pursuit of the multicultural hub and her rise to the position of Deputy Lord Mayor. She says women should be encouraged to participate in local government.

“It is inspiring to have two women leading the chamber for the first time in so many years,” she says.

“As a child of immigrants that grew up in the city, supporting my parent’s business, this sends a clear message to everyone out there that no matter your gender, age or your upbringing, if you have a passion and are prepared to work hard, anything is possible.

“Young women can be in this position. And I think that’s great.”