City of Adelaide councillors this week voted to scrap plans for an east-west bikeway, with one councillor calling the move "an utter failure of leadership".

On Tuesday night, City of Adelaide councillors voted to scrap plans for an east-west bikeway through the Adelaide CBD.

The council has been in the process of planning the additional protected bikeway since 2016, and was finally forced to make a decision this year based on the impending expiration of a partial funding commitment from the State Government.

The $3 million funding commitment was set to expire if the project was not completed by 30 June 2021.

Councillors who opposed the bikeway argued it would risk pedestrian safety and that the council had not spent enough time consulting ratepayers.

The City of Adelaide administration recently wrote in a report “the benefits to society outweigh the costs of the project”; however, eight elected members voted against construction.

“The project is consistent with Council’s Carbon Neutral Adelaide Action Plan 2016-2021 and the South Australian Government’s Climate Change Action Plan 2021-2025. The bikeway will also support Council’s desire to attract millennials to live and work in the city,” the administration’s report says.

Before the council debate kicked off, lawyer Greg Griffin, speaking on behalf of CBD businesses opposed to the bikeway, told the chamber it could cost the council between $580,000 to $780,000 in lost car parking revenue, and construction would be a “horror” for businesses.

The public was then temporarily excluded from the meeting after members supported Lord Mayor Sandy Verschoor’s motion to discuss “legal advice” she received that day in confidence.

After roughly an hour and a half of debate, only three Adelaide City councillors supported building the bikeway.

A strong advocate of the project, councillor Helen Donovan, said the City of Adelaide is responsible for all transport users, including pedestrians, vehicle drivers and cyclists, but the council “have primarily focussed on a provision for cars.”

“We know that only 34 per cent of people travel in through the city… by car, and up to this point we are not satisfying the safe opportunity for other users to get into the city and to move through the city,” she said.

“What an utter failure of leadership if we don’t progress… with the $3 million from the State [Government] to actually make some steps towards where we know we need to get to.

“Are we really going to delay four years, a whole term of council, and not get any progress on active transport? That would be an utter leadership failure. An utter failure of any strategic intent for the realm on transport.”

Member for Adelaide Rachel Sanderson said, in a statement to InDaily, she’d written to Transport Minister Corey Wingard asking for the remaining $3 million grant money to be reallocated for other city transport projects. 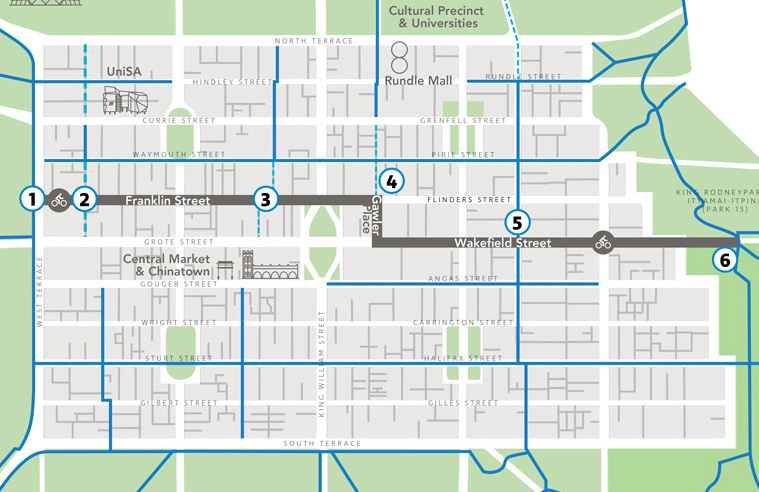 The proposed route, which was shot down. This picture: City of Adelaide

In 2016, the State Government and the City of Adelaide struck a funding agreement, with each promising a matched $6 million to make Adelaide “the cycling capital of Australia”. They promised $3 million each for the north-south and east-west bikeway.

With the north-south (Frome Street) cycle path completed, the last piece of the puzzle was the east-west project. But the State Government announced in December they would withdraw the remaining $3 million funding if the bikeway wasn’t delivered by the middle of this year.

The project’s failure is a disappointment to many cyclists who use the city’s roads, including EcoCaddy founder Daniels Langeberg, a one-time finalist of the City of Adelaide’s Carbon Neutral Adelaide Awards.

“If basic rudimentary things can’t even get up, like bike lanes going across the city, then what hope do we have for other more radical things that need to come into fruition?” Daniels says.

He says voting down the cycleway sets a bad precedent for the City of Adelaide, especially due to the money being allocated “a long time ago by the State Government.”

“What this bikeway really did mean was that it was the hope that it would provide infrastructure for those that weren’t confident to ride, and therefore, having more cyclists or more people using bike infrastructure around the city,” he says.

“I like the Adelaide City Council. I’m a big supporter of what they’ve done over the years. But I lose confidence when things like this [happen], which are sort of a no-brainer.

Councillor Alex Hyde voted against the motion, telling Town Hall schools had reached out and expressed fears their student’s safety would be at risk.

“Many of them will traverse across the bikeway. We don’t have any control of that,” councillor Hyde said.

The administration outlined two construction options in the cycleway report: a kerbside option similar to the north-south bikeway, with physical barriers between cyclists and traffic; and a bikeway that would run in the centre of the road, designed to alleviate concerns of the expected loss of approximately 170 car park spaces in the city.

Councillor Greg Mackie also voted against the bikeway, saying he wasn’t convinced either model will “do anything more than create enduring angst” among community groups.

The proposal was also rejected by councillor Anne Moran, who said she didn’t trust the council to deliver to the cycleway adequately and within budget.

“Council has made a muck of them,” she said, in reference to past projects.

Alongside councillor Helen Donovan, councillors Phil Martin and Robert Simms supported the motion, with Simms saying he was “disappointed” council would not take action. He said this would signal “we are not showing the leadership we need on our climate crisis.”

Councillor Martin rejected arguments made by those who opposed the motion regarding cost and the danger it presents to CBD students.

“I’m going to say this matter will be a matter of great regret for many, many years,” he said.

The three councillors who voted in favour of the project going ahead were Helen Donovan, Robert Simms and Phil Martin.

Lord Mayor Sandy Verschoor told InDaily yesterday she was “personally disappointed” with the council’s decision to scrap the bikeway, but after speaking to stakeholders along the route, she was not convinced that the proposal would work.