The Motorcycle Society: Coffee and custom built bikes in the CBD

Rising from the ashes of Greasers Workshop, The Motorcycle Society brings a café and a service, repair and custom build motorcycle workshop hybrid concept to Pulteney Street.

Above the counter of the café section of The Motorcycle Society’s Pulteney Street shopfront, motorcycle helmets are strung up from the ceiling, lights glowing from beneath their visors.

A black Kawasaki takes pride of place in the front window, visible from the street, while a little red Suzuki postie sits at the back of the room. Atop a retail shelving unit stocked with TMS apparel sits a yellow Honda CRF50, customised by Gerrard Otimi, the head mechanic and co-owner of the café and workshop hybrid.

From the busy thoroughfare, The Motorcycle Society is ostensibly a coffee shop set up with a very particular niche in mind – people with a penchant for beautiful bikes. From Gunson Street, the back laneway that runs parallel to Pulteney between Wakefield and Angas Streets, the roller door to the business’ workshop is up and the full scope of the business is visible.

There are five bikes in the workspace, all either in the process of a service or repair, or waiting to be picked up by their owners, and in a smaller room adjacent to the workshop there are pieces of machinery that Gerrard and his team will use to build custom bikes. 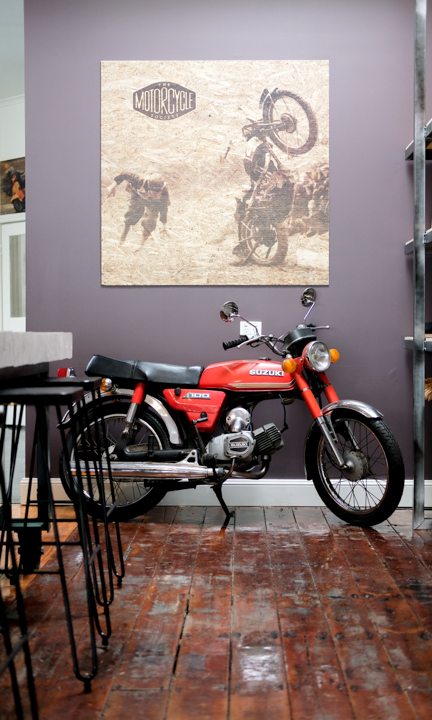 “This place will be fenced off from people, they can view through the windows and watch mechanics either cutting a frame up or attaching new paintwork, all of that type of stuff,” Gerrard says.

He points to a bike in the service centre waiting room featuring hot pink paintwork.

“We’ll adapt to anything that the customer demands as well. We’ll paint the engine pink… If they like it and they want it, we’ll do it,” he says.

“The owner actually gave us this high-end Vogue photo, it was straight out of the magazine, that had that 1980s pastels to it,” Josephine Otimi, Gerrard’s wife and business partner, says.

“We sat with him and said ‘How do you want this to translate onto a bike?’ We take very wacky concepts and translate it into what they’re looking for.”

Gerrard and Josephine have been part of the bike building community for some time; Gerrard started as a mechanic at Peter Stevens before taking off to the mines in search of better pay.

After eight years in the mining industry, Gerrard began to suffer from mining depression. Josephine convinced him to take some time off, and the couple started up Greasers Workshop at their home in Mitcham.

Greasers soon outgrew the capacity of Gerrard’s shed, and so they took the opportunity to reconsider the business while looking for a new location.

Working with a data scientist, the duo settled on Pulteney Street for its high volume of bike traffic and its proximity to the city centre. The business’ new identity was born of a desire to not only provide a service, but to create a cultural hub for people who love bikes – a society in name and in practice.

“It’s wholly and solely for the love of motorcycles, right? We want to bring people together purely and simply for the love,” Josephine says.

“People very much align themselves to ‘I ride a fast bike,’ or ‘I’m someone who rides a scooter and I hang out with other people who ride Vespas,’ there’s a small emerging café racer culture here in South Australia.

“For us, what’s really important is that we’ve built up The Motorcycle Society as a brand that’s not based on those things. We’ve positioned it so that it’s about people who love bikes.” 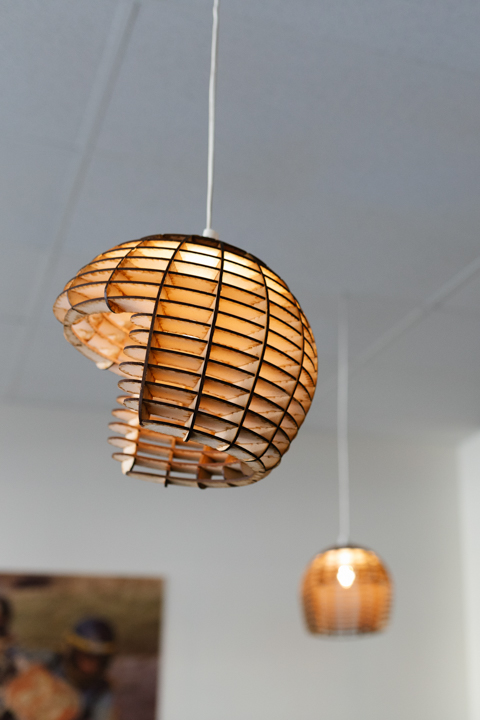 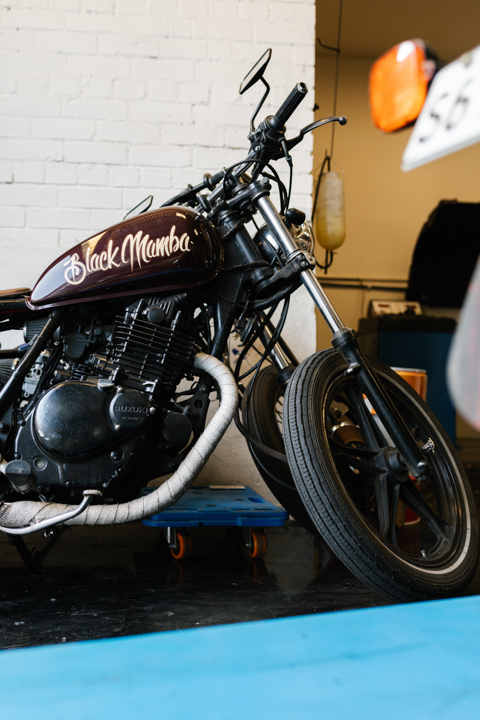 The business also has a lot to offer for people who love coffee; the café, designed by third business partner Simon Modra, is supplied by Toby’s Estate and will be their first real ploy into the Adelaide market. The coffee machine, a Kees van der Westen Spirit, has just enough knobs and levers to match the mechanical décor.

There are toasted sandwiches on offer, as well as a range of sweets from the Donnelly family, of The Rolling Pin and Mayfair Bakery fame.

It’s an elevated offering compared to the push-button instant coffee machine fare available beside the front desk of most other mechanic workshops.

“We’ve had a few customers come in getting a service, set up on the internet and get to work, and then close their laptop, get on the bike and go again,” Gerrard says.

“With people working in the city, we are open from an early hour, 7am, so it gives time for people to ride in and drop their bike off, have a coffee and breakfast and go to work as well, which is quite nice.” 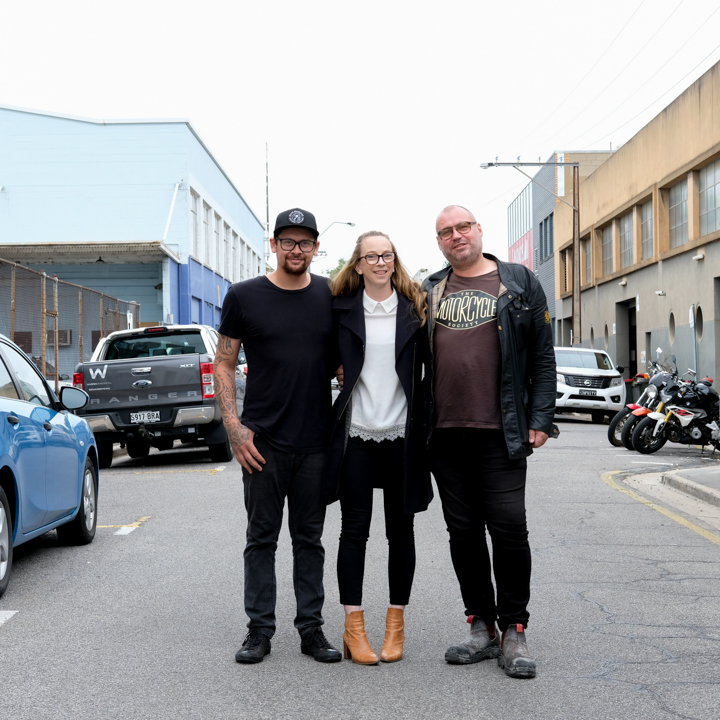 All things going to plan, this will only be the first of many Motorcycle Society locations, but in the short term the team is happy to be contributing to a revitalisation of Pulteney Street: Diaspora Kouzina recently opened two doors down; Persian restaurant, Naaz, is set to open next door in early 2019; and their own space, only opened since 5 November, had previously sat dormant for years.

“This area is a growth area and we’ve basically put ourselves in the epicentre.”

The Motorcycle Society opens for coffee, services, repairs, custom builds, and general bike chat Monday-Friday 7am to 5pm and Saturday 8am to 1pm.

Gerrard in an edition of Cafe Racer. This image: Johnny von Einem