The Ed Castle debacle proves politicians must step up

We had a few beers to commiserate with the Ed Castle's publican Tony Bond on the closure of his business. We then came up with a plan to ensure what happened to Red Door Bakery and his pub never happens again. 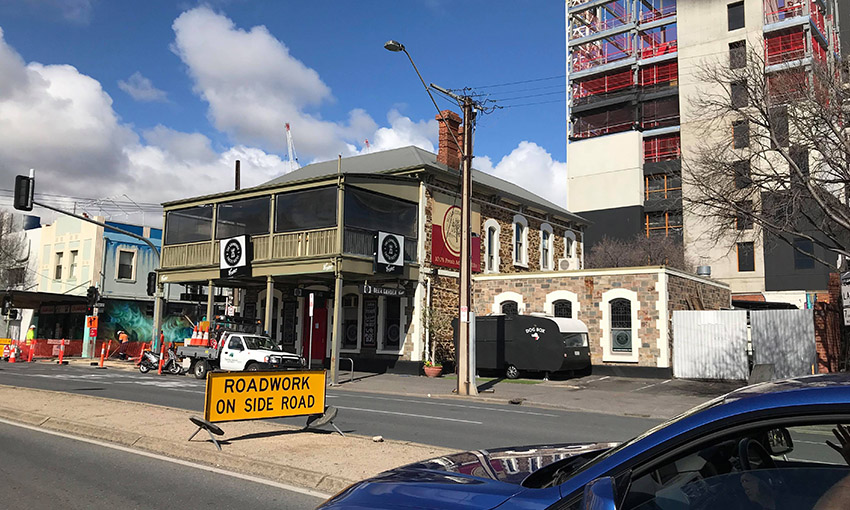 Handing back the keys to the building and walking away from five years of his life at the venue on the corner of Currie and Gray Streets on the west side of the city, Tony seems relaxed when we catch up with him at The Colonist.

“It’s over for me now,” says Tony taking a sip of his beer.

“I just felt – like a huge wash of dopamine through my entire body – such great relief to exit the lease and not be stuck in such a bad place.”

CityMag reached out to Tony, because like Red Door Bakery proprietors Gareth and Emma, Tony is more than the story of his pub closing down.

Tony Bond has contributed to the culture and vibrancy of Adelaide over the long term. Beyond operating a great live venue and excellent beer garden, Tony’s investment in Adelaide culture stretches back to his time as a gallerist on Magill Road, where he gave many of Adelaide’s now celebrated young artists their big breaks at Gallery 139.

Artists like Peter Drew, Thom Buchanan and Jason Sims (who installed the giant glass and metal rhombohedron at the north end of Bank Street) were just a few of the emerging artists Tony celebrated at his gallery. This validation undoubtedly helped their careers progress.

We underline Tony’s history because it’s relevant to the bigger picture.

Everyone who defends these massive infrastructure projects and high-rise developments invokes the ‘big picture’ and the ‘long run’ and other macro-economic platitudes to justify the inconvenience of people in the present, the locals and the community. The future will be prosperous!

But Tony’s been contributing to and building South Australia’s culture, community and economy since well before the former AG and Minister for Planning, John Rau, lifted the height-restrictions on property developments that led to the the current construction boom which has contributed to shuttering his pub.

Too often individuals at every level seek to exonerate themselves, without seeing the clear opportunity to help or – gasp – provide representative leadership in the community.

“It’s not our fault,” is the refrain from the City.

“We’re complying with every law,” is what the developers say.

Both are true and accurate statements and neither stop a small business slowly choking to death in the building dust of progress.

Looking north along Gray Street – ‘Do Not Enter’. These images: Tony Bond

Tony was filmed by contractors rather than consulted.

“You can quote me on this,” says Tony as he gets down to the dot points for why he believes Adelaide and South Australia needs to consider new legislation to assist residents and business in the catchment area of large-scale and disruptive development.

What jumps out at us immediately in the numbers is that it’s an eerily similar drop in revenue (as a percentage) to what the traders on Queen Street in Croydon reported to CityMag. The Roadworks at the intersection of Port and South Road caused a 35 per cent drop in trade for Red Door Bakery and others along the iconic strip.

“Wow, I didn’t know that,” Tony responds when we tell him his drop in revenue mirrors the Queen Street experience. “That’s eerily similar to my situation.”

The numbers are important because Tony, although completely at peace with walking away from his business, says government – both local and state – need to stop his experience being that of any other business hence.

CityMag suggested last week that a percentage of the total value of huge and disruptive developments and infrastructure projects must be set aside to assist the community in overcoming the adversity inflicted by the ‘big picture’.

Tony says this idea would work.

“Developers can set aside one per cent in escrow – the money is held in trust and where the community is able to prove genuine hardship, they can apply to the fund to help mitigate the impact of the development,” says Tony.

There are so many ways this small consideration would have positive impacts on the community and developers.

Setting aside one per cent of the budget doesn’t mean the developer loses that money, but is rather incentivised to be a good and positive corporate citizen. The better they perform and the less disruption they cause, the more of that fund is returned to them.

Specifically to the case of the Ed Castle and the development of a 17-storey, 770-bed student accommodation tower on its boundary – the City of Adelaide will be collecting rates on a vastly more valuable property in the future.

“Council will be drowning in future revenue,” says Tony. “They were getting rates on a single storey warehouse before and now – 770 beds! The City of Adelaide was very concerned right up to the point of doing something about the Ed Castle’s situation. It was all just lip service,” says Tony.

In this way, the escrow fund paid by the developer could also be reimbursed by any local council and rate collector through discounts on the future rates of the building.

“I asked the City for Adelaide to provide relief to the business by waiving our rates and fees over the construction period,” Tony tells us. “They wouldn’t even do that – because, they said, there was no precedent for it.”

It’s time to set the precedent, especially when an escrow fund, reimbursed by increased rates on a future building could look after the current, local fabric and culture of a neighbourhood and cost nothing!

He grew up on Carrington Street and sold ‘The News’ newspaper after school out the front of the General Havelock Hotel on Hutt Street. He bought his first bicycle from Crannaford Cycles on Halifax Street, and Tony’s Dad, Colin, started the Adelaide Residents’ Society in the early ’70s.

“I’ve loved Adelaide forever,” he says. “I’ve lived in Copenhagen, lived in London, Madrid, but Adelaide has always been home.”

“We have to be very careful with all this development. And don’t get me wrong – I’m all for people trying to make a buck and good luck to them, but without a major plan, an overarching view of what we want the city to look like, Adelaide might end up looking like a smashed piano if we’re not careful,” says Tony.

The metaphor rings true beyond the visual.

A truly smart city not only looks the part, but recognises each note – the big bass chords of businesses powering the economy at one end of the scale and the tiny tinkle of small business and individual citizens on our city’s streets at the other – is worth listening to.

There is no reason we can’t have, and can’t strive as a society towards greater and greater harmony.