"So the biggest relief is that we’re still here." 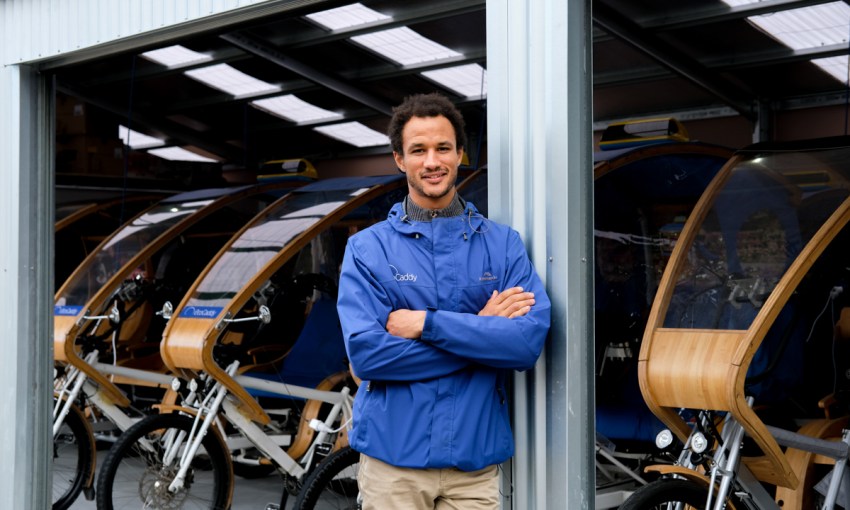 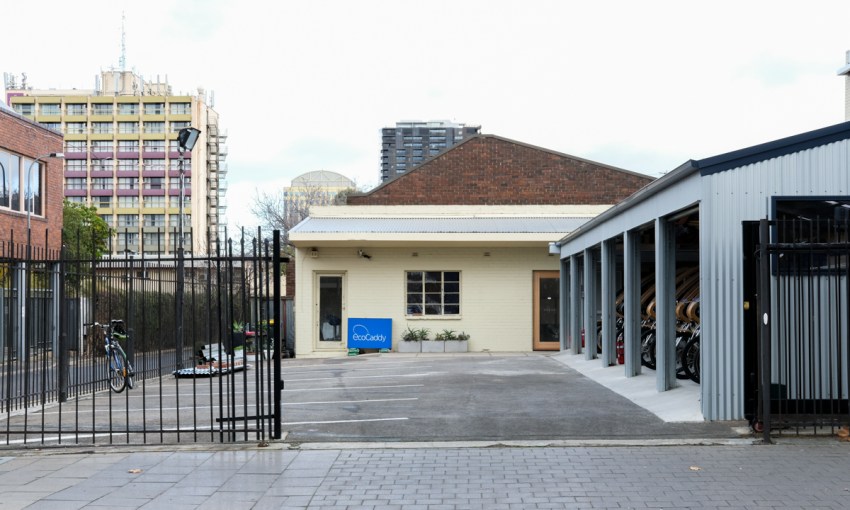 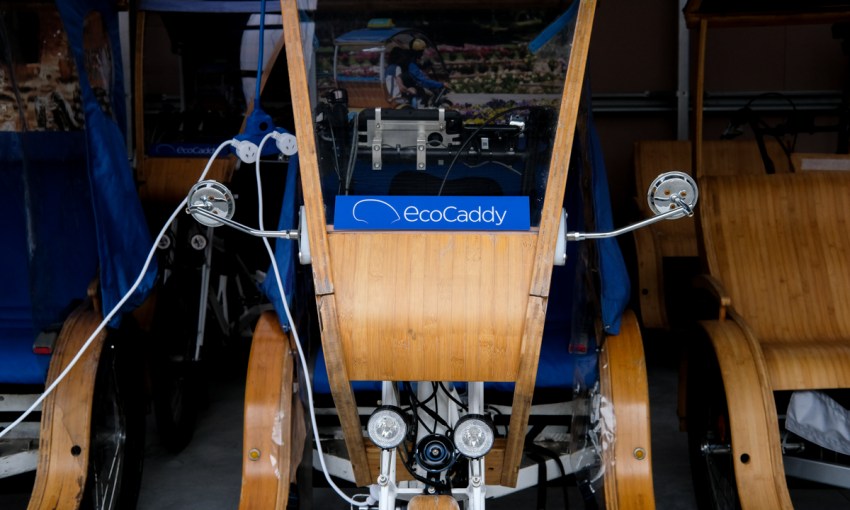 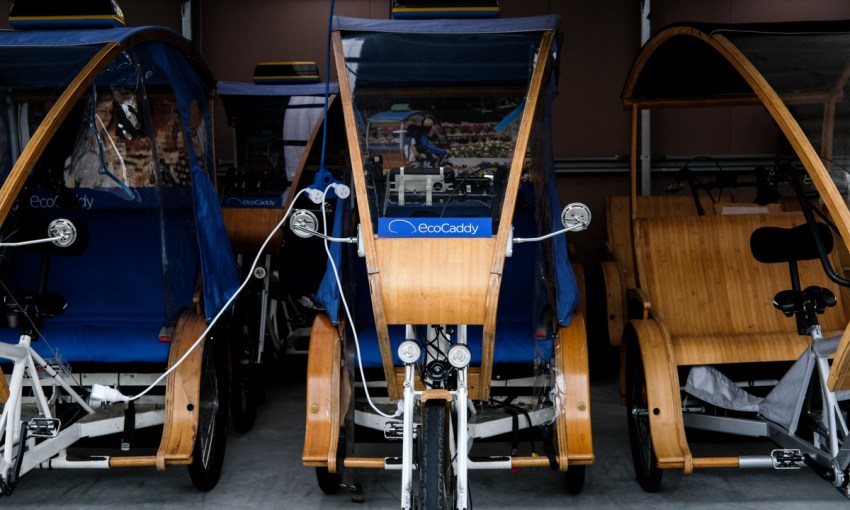 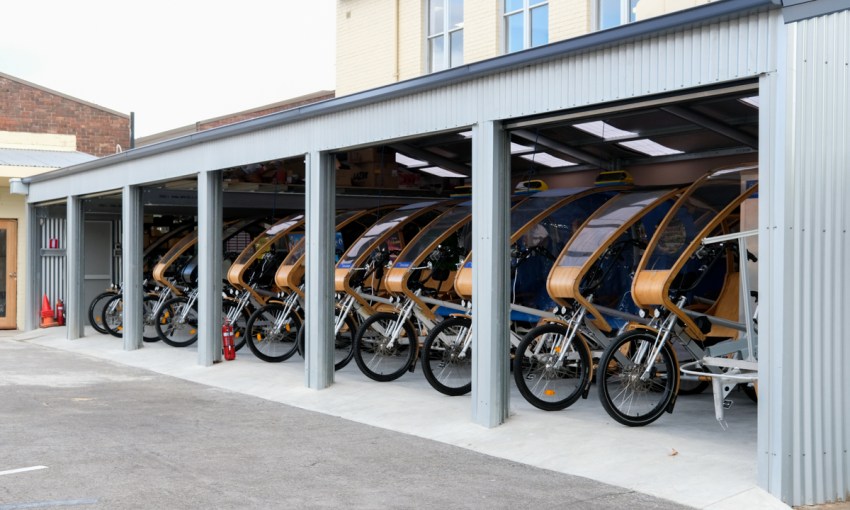 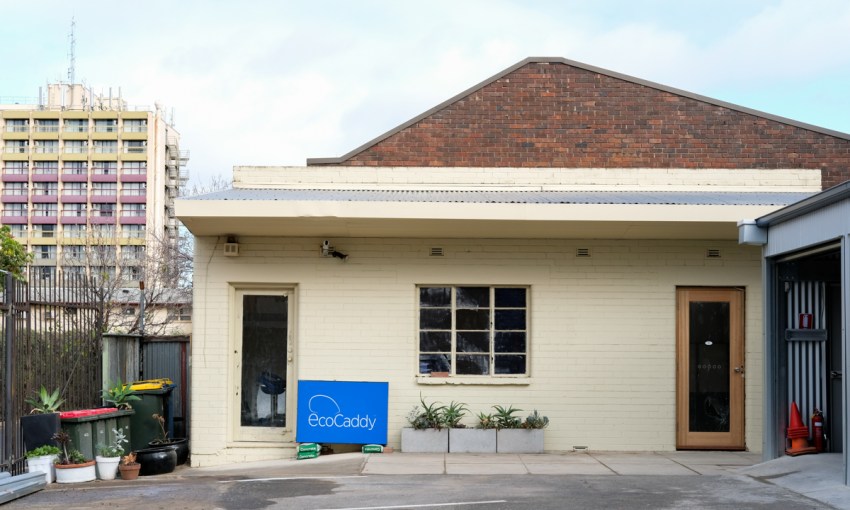 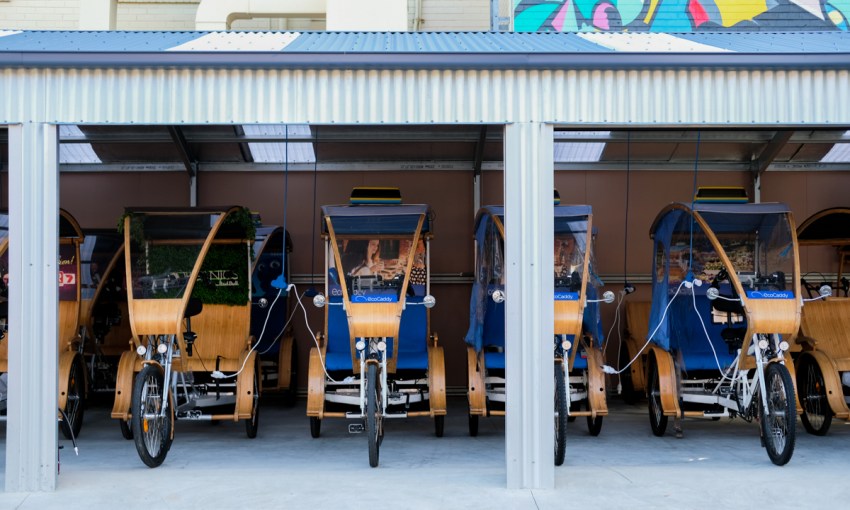 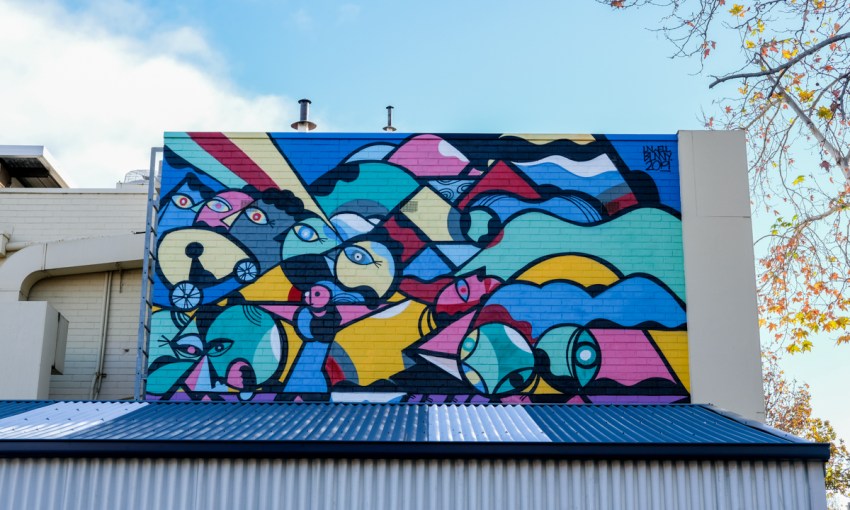 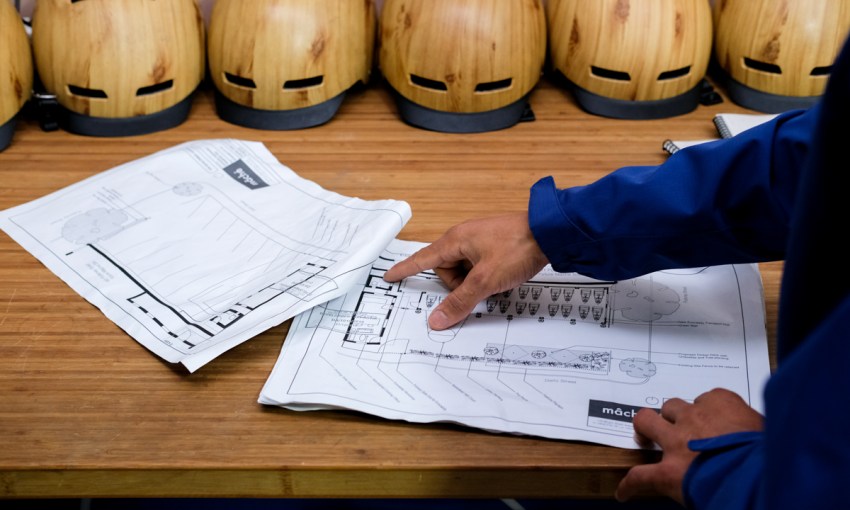 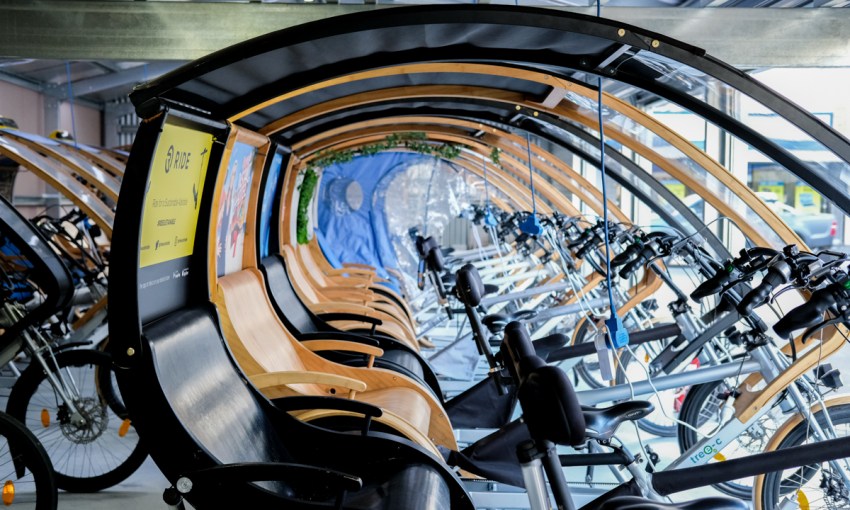 Six months ago EcoCaddy was staring down the barrel of an incredible decision to either move into the suburbs, or set sail for Melbourne where they’d been testing the market and had huge success.

“We were desperate at that point,” says Daniels Langeberg, founder of EcoCaddy. “We had called in every favour we could but it looked pretty bad. It looked like we had to move out of the city. For a time there – for probably two-and-a-half weeks – I was shitting bricks because I thought we had to move EcoCaddy entirely.”

Daniels has bootstrapped EcoCaddy from the beginning, but his dream of creating a sustainable, carbon-neutral micro-transit mobility company for Adelaide’s CBD was dissolving before his very eyes as the clock ran down on 2018 and his tenancy on Whitmore Square was due to finish.

Daniels is a diligent businessman and while his entrepreneurial spirit may manifest as the utopian dream of building a pollution-free public transport system for his hometown, you can bet he’s also running the numbers.

“When you put everything into a spreadsheet and you start to understand the costs associated with getting into the city to start making money. Man it gets scary, really quickly,” says Daniels.

But six months on, EcoCaddy has built a new headquarters on Pulteney Street, announced a new partnership with fellow micro-mobility company RIDE scooters, and is about to start a delivery service for one of our favourite CBD sandwich providers.

Founder of EcoCaddy Daniels Langeberg shares lessons learned in the Adelaide market and how to build resilience into your start up venture in South Australia.

Frankenstein your business ’til it works

EcoCaddy always planned to offer short trips around Adelaide and sell advertising space on the back of their tricycles to help subsidise the fare, but Daniels had to pivot quickly after discovering Adelaideans were happy to use his service for free but far less happy to pay for the privilege of hitching a ride with one of his trikes.

EcoCaddy operates around events and important occasions offering free rides for everyone, while EcoCaddy’s advertising partner foots the bill.

“It’s a bit like the Robin Hood Theory where we are doing something positive with our corporate advertising partners’ brand and that brand association provides that good will, which we then re-channel back through our company to pay our employees and heavily reduce the costs of our transport and other products,” says Daniels.

What EcoCaddy has ended up creating is a subsidised public transport service without using one dollar of tax payers’ money.

“We were an early mover and we were at the bleeding edge of technology when we launched,” says Daniels. Early adopters of EcoCaddy’s service may recall the buggy-as-hell ride hail app the pedicab company launched. “We were trying to create an app – like Uber – at like 0.01 per cent of the resources they had,” admits Daniels.

“That was really painful.

“Now – four-and-a-half years down the track – technology has caught up to my way of thinking but the best thing is the price has gone down.”

Daniels foreshadows the relaunch of a ride hail service but stops short of confirming the details.

“We’re working on a project, which we can’t talk too much about but we’re looking at how we can package our offering not just to our brand partners but to the City of Adelaide and to South Australians and get them behind it as well,” he says. 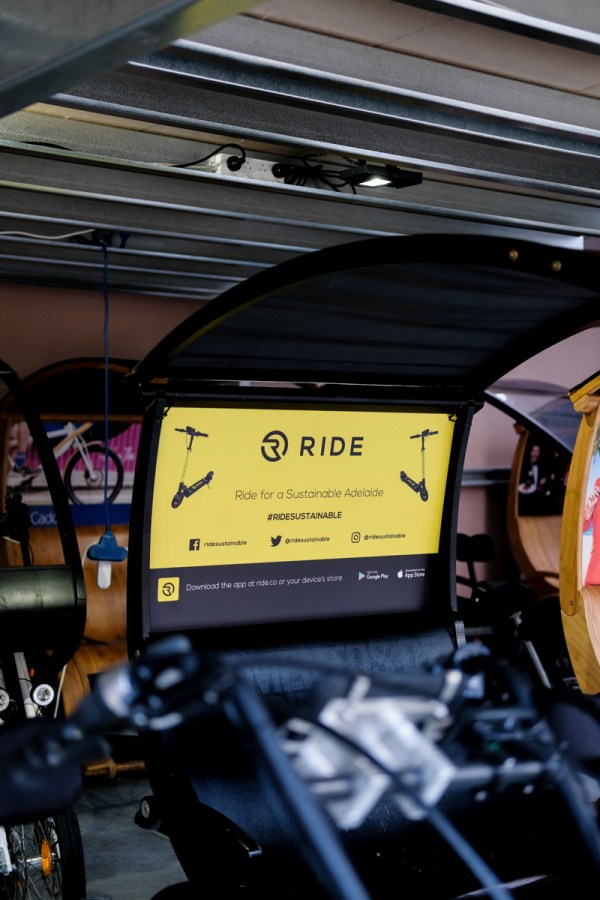 Ride Ride or EcoCaddy – either is fine by Daniels

Why compete when you can cooperate?

With the dismissal of LIME scooters and the rise of the BEAM and RIDE brand of scooter mobility around town, we wondered how EcoCaddy would respond to these seemingly successful micro transport options cluttering up footpaths across the CBD.

“Seemingly we’re competitors, being that we’re both in the micro transit or micro mobility space (those short trips between 1.2 and 1.6 kms),” says Daniels. However, the official EcoCaddy position is that the scooters are a different service offering and that by increasing the alternative (to cars) transport options in the city can only help the company’s key objective of getting people out of cars in the downtown area.

To compound things, Daniels has struck a deal with RIDE scooters to collect and recharge the scooters using a custom built EcoCaddy and thus lowering the carbon emissions of RIDE by avoiding the use of cars to do the same job.

Daniels got in Premier Steven Marshall’s ear at the recent launch of RIDE scooters in Adelaide.

The struggle is real in Adelaide

“I wish I was around in Adelaide in the 1950s when there were street cars and we had a population of 50,000 people living in the CBD,” says Daniels.

Without a doubt, Daniels sees his biggest achievement and greatest frustration as one-in-the-same: lasting in Adelaide.

“So the biggest relief is that we’re still here,” says Daniels with a natural sigh.

“One of the things that takes time here is building relationships with stakeholders. With the Adelaide City Council and State Government it was proving we could do what we do and we do it in a way that’s uniform and to the law and doesn’t piss off a whole lot of people.”

170,000 rides later and Daniels is seeing the ice begin to melt and a few gatekeepers starting to understand the value of EcoCaddy’s proposition.

By contrast, the first time EcoCaddy took their product to Melbourne – in partnership with a festival – they took 3,000 people on rides across the city.

“And that was a minor festival,” says Daniels, “we were hitting benchmarks with half the fleet size and a quarter of the time as we were during Fringe in Adelaide. That gives you an understanding of how big the opportunity is over in Melbourne.

“But it’s not the opportunity – it’s the mindset of people over there that they’re happy to try something new.” 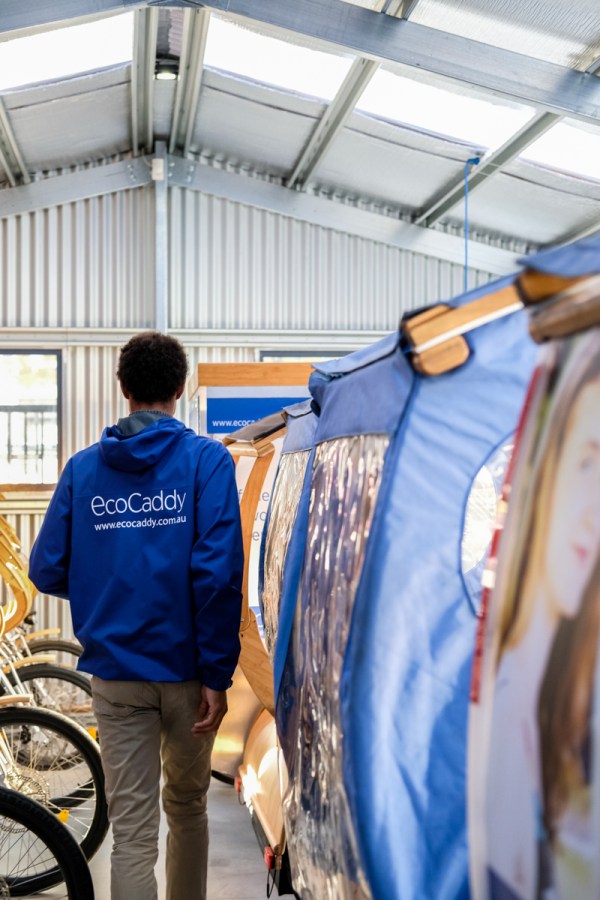 Daniels Langeberg among his fleet of pedicabs

CityMag remembers meeting Daniels at the pub a few years back to catch up about his business and were taken aback by his ordering a lemon lime and bitters. In itself an LLB is a great drink, but a 6pm on a Thursday evening in Summer?

“I’m a lot healthier now,” says Daniels about his decision to quit drinking altogether. “There was this imbalance that was happening. I would get more stressed, I would drink more and then work would get harder. So I thought, ‘if I reverse this and take out alcohol, maybe it’ll be exponentially better for me.’

Daniels hasn’t had a sick day for the last two years, practices yoga with his now-business partner Izzy Pearce at Maché, eats purely vegetarian, organises a community ‘night ride’ once a week and meditates daily.

“It seems to be working,” says Daniels.

Build it and they will come

EcoCaddy may have only just cut the ribbon on their headquarters at the southern end of Pulteney Street, but with the six-door garage open and the fleet of 22 resplendant EcoCaddys at the ready, this business is making a positive visual statement at one of the key gateways to our city.

Daniels points at the blueprints for the courtyard infront of the garage. There’ll be a half court basketball space, a sustainable and edible garden, hopefully a hole-in-the-wall café and a solar array on the roof of Daniels’ other business Maché, next door, that feeds the properties and recharges the pedicab batteries.

“We want it to be a demonstration piece,” says Daniels about the broader vision for EcoCaddy in Adelaide.

“We want people to be able to have a coffee here, while an EcoCaddy pulls out and takes them on a tour and they learn a little bit about how a business can be completely carbon neutral.”