Lis Moritz of Catwalk Fabrics has watched the fortunes of Adelaide's fashion industry rise and fall, and stuck around through it all.

Lis Moritz has seen it all. She’s been a part of Adelaide’s fashion industry for as many years as she’s been in Adelaide, and she’s run Catwalk Fabrics for the last 16.

When we walked in the door of the Brompton shop (which fronts Lis and her partner Peter’s home and furniture studio), one of the first questions Lis asked us was what we thought about the fashion industry in Adelaide. Our response was honest, but tentative: there isn’t much of one at the moment, but it’s growing, and people are trying hard.

We weren’t sure, but Lis seemed to agree. Certainly the story of her business’ evolution seemed to indicate that she might.

“I started by selling fashion magazines in 1997, maybe ’98. I bought a little business and I was servicing Adelaide fashion designers and manufacturers with fashion magazines, and soon realised that’s not enough income,” Lis says.

Her business had to change.

“All of these designers in Adelaide had left over fabric, so I’d walk in to, let’s say, Sally Bluff and Razak’s and George and Harry, all of them, Alexis Georg, heaps of them, and I’d say ‘do you have any fabric left over?’,” says Lis. “And they’d say ‘oh yeah, take it, go with it, take it all’, which I did.

“[That was] tonnes of fabric – lifting, rolling, carrying for years. I really did, to get this business growing, until I was able to get this business to a situation where I could purchase fabrics wholesale. And that’s taken me on another journey where I can buy [the] right fabrics at the right price.”

Entrepreneurship, doing something yourself, going out there and giving something a go has sort of been my thing, and that’s a family thing. That comes from my grandfather – Lis Moritz 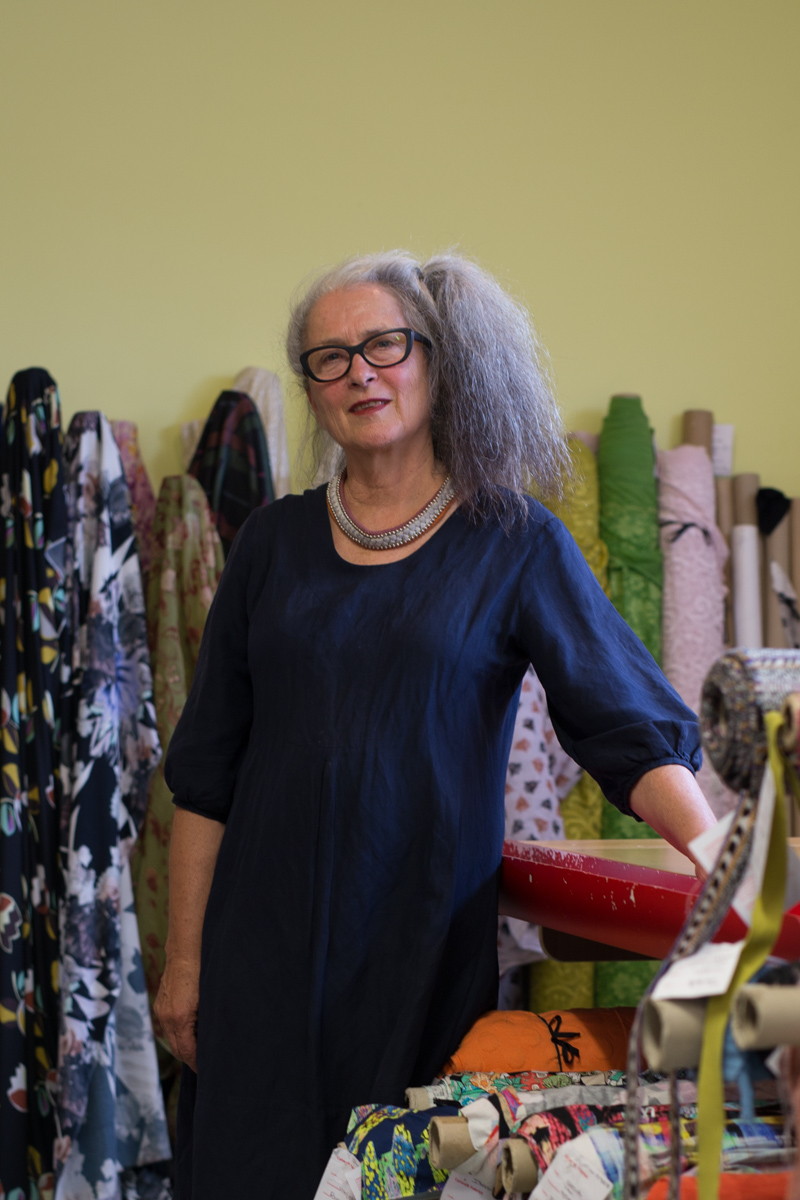 Lis’ edge as a fabric supplier is that she offers stuff that’s a little different. Her fabrics, like her, have a quirky sense of humour to them. Aesthetically speaking, they’re a risk, though the quality remains impeccable.

“It’s an aesthetic. It’s a choice. And it’s a risk. I can’t explain it, it just is what it is,” she says. “My aesthetic can be risky, because you’re going one step out of the norm. These are Valentino fabrics, these. There are 3 Valentino fabrics in the shop.”

“Friends of mine, they travel to Europe twice a year. If any fabrics in here are marked Italy, they come through friends of mine. They allow me to buy through their business, which is fantastic because without them I maybe wouldn’t have the edge I’ve got. That’s where I get the beautiful Italian wools, crepes, gabardines and some of the Italian pontes, and these pattern pontes.”

Funnily enough though, Lis wasn’t always in this industry.

“I started at Broken Hill. I went away for school, came back. I started with dental nursing – believe it or not,” she says.

“I then started with my grandfather’s business, which was mining. That was a mightily successful business, and I learnt a lot. I ran that business, and then started my own business. I left that thinking I’d start a craft business, where I came to Adelaide to buy ceramics and weaving and things like that [to sell in Broken Hill].

“For Broken Hill it’s like ‘what’s this?’ Imagine, way back then! It was called The Pot Hole, and I had people coming in looking for dope. I was innocent, I didn’t know anything about pot or what pot was. People were lurking around thinking I was a supplier or something,” she finishes with a laugh.

It’s that background that built Lis’ business skills and her passion as a business owner.

“Entrepreneurship, doing something yourself, going out there and giving something a go has sort of been my thing, and that’s a family thing. That comes from my grandfather, way back from that,” she says.

And her passion for fabrics and pattern making is something she hopes to pass on too. Lis spent years hosting pattern making classes in the back room (which is now her home).

“A close friend of mine, Robyn Trott, she took the pattern making classes,” she says.

“We had for years the pattern making classes, they were wonderful, really. We had classes in that big space back there for quite a number of years until we needed it to live in.  She then worked as a pattern maker for Sally Phillips, so she went full time there.

“It was a lot of work having people like we did at night here. She’s worked a full day and then coming here. It was a 16 hour day for me and it became really difficult, just exhausting.”

But she recalls the memories fondly, proudly even. Her eyes light up when she speaks on local designer, Simmone Standing.

“I’ll tell you who started here: do you know Simmone Standing? Of course you do. I call her, she’s my third daughter. That girl. Simmone started here, she was quite young, Simmone. She came along here and she could just do it. She could do pattern making.”

And that’s also something she admires in the next generation working in today’s fashion landscape.

As our time with Lis came to an end, we asked her the same question she’d asked us on arrival. Her summation of the Adelaide fashion scene wasn’t like ours – it wasn’t tentative, and it was as assured as it was sad.

“I don’t know that we have one really. Well, my basis here, like I used to be years ago, when Gay and Sally and George and Harry and Alexis Georg and Rosie and, oh, if I went through my books, there were heaps of them,” she says.

“And there was an industry here. And Frieda, they had a factory on Anzac highway and they had 120 people employed, and they were doing things for Perri Cutten and things way back when there were masses of locally manufactured stuff going out. But I don’t know that that’s happening now.

“I think there are a lot more people giving it a go at least. I think there’s a lot more young ones giving it a go, but from my experience over the last I don’t know how many years, I’ve never seen anyone here really translate yet into being Sally Phillips. You need a lot of money.”

Again, with a twinkle in her eye, she returns to Simmone as her hope for change in Adelaide’s fashion industry.

With Lis’ support in the background, and the wealth of wisdom she can offer, we suspect big things can and will happen.