Hills Hops: South Australian hops coming to a beer near you

As South Australia's brewing industry grows, so too does the demand for local produce. Hills Hops is providing a South Australian option, grown on the fringe of the Adelaide Hills.

“When we got here it was [the house], nothing else… Everything else you see, we’ve done in two and a half years. So it’s been a fairly steep journey,” Marc Guyatt says, as he welcomes CityMag onto his 9-acre property in Mount Pleasant.

Follow Hills Hops on social media for updates on where their produce ends up, and where you can drink it.

On one side of the homestead is an open paddock with 25 merinos, a white Suffolk, and an alpaca named Crusher. On the other, there is a vegetable patch, a run of chicken enclosures, and a series of tall hop trellises, the source of Marc’s two-year-old beer-adjacent start up, Hills Hops.

Around 14 varieties of hops creep along coconut-fibre twine, grown from rhizomes sourced from a Victorian grower and destined for use in local craft breweries.

Marc and his partner, Erin Bishop, were drawn to the farm for a change of lifestyle. The couple was raising two kids in suburban Adelaide, but they hoped to provide a more nature-driven upbringing similar to their own experiences – Marc being a native Barossan and Erin growing up beachside at Sellicks.

To make the move to a hobby farm viable though, Marc and Erin needed to draw income from their hard work.

Marc’s first thought was to plant wine grapes – he’d spent a few years between high school and his career as a draftsperson working for Yalumba in the wine industry – but a friend prompted him to consider the relatively sparse local hops market.

“There’s a handful doing it, and we’re all around the same sort of scale, give or take,” Marc says.

“We planted four [plants] two-and-a-half years ago to see whether they’d actually grow up here – because it’s marginal.”

Mount Pleasant borders both the Adelaide Hills and the Barossa, and the patch where Hills Hops is situated has proven to be fertile ground for the hops.

“Seemingly the cool climate [helps], plus we do get a lot of heat as well. The soil type is brilliant… It’s sandy loam, which is one of the perfect growing mediums. It’s about three or four hundred millimetres of sandy loam, and then it goes to clay.”

In its first year, Hills Hops produced 52 kilos from 75 plants. This year Marc has added another three rows and aims to reach a yield of 100 kilos, benefitting from the additional trellises and more established plants.

While he started with a broad range of varieties, as the business progresses he is narrowing down the offering based on two important metrics: suitability to the soil and climate, and commercial demand.

“Barossa Valley Brewing have been brilliant, and really helpful in teaching me what brewers want, need, and ultimately how to provide a product that works for them,” Marc says.

“The challenge is for us to find a product that’s user friendly for the brewers as well. Sierra Nevada over in the States pioneered the whole-cone pale ale. That’s the model I’d like to find – a brewer who wants to align with something like that, and then we can work together.”

Lupulin is the yellow powder found inside the hop flower

The demand for locally grown hops has been greater than Marc anticipated. Provenance is an important factor in all facets of the food and beverage industry, but hops have traditionally been used in a dried, pelletised form, mostly as a bittering agent.

More often in younger breweries, hops are used ‘wet’ (meaning recently picked and unprocessed) as a way to introduce depth of flavour, which makes freshness and proximity integral to the product’s value.

While Idaho 7 and Mosaic are trademarked by growers based in the United States, Marc’s varieties are freely available to the public, and selecting what will work in the local market is largely a matter of trial and error.

“Cascade was definitely a commercial decision in the sense that yes, it is the most popular hop in the world, the most heavily planted in the world,” Marc says.

“Centennial is also known as super Cascade, this seems to be very popular with brewers and has done well here.

“Chinook was this one that seems to be quite popular with home brewers, so then we planted a row of Chinook as well. Those three rows are all commercial decisions, as to what we learned from the first year.”

The Hills Hops 2019 harvest is currently underway, and this year Marc has teamed up with Alistair Turnbull from Lobethal Bierhaus to dry a portion of his yield. In addition to supplying Barossa Valley Brewing and Western Ridge, this year Hills Hops has added Left Barrel Brewing and Recklaw Osborn Brew Co. to its ledger.

It’s quite a way away from the bare paddock Marc walked onto nearly three years ago, and much of he’s learned about the industry has come from self-lead research in online forums and discussions with growers from around the country.

“The independent hop-growing scene is really collaborative. Everyone works together,” Marc says. 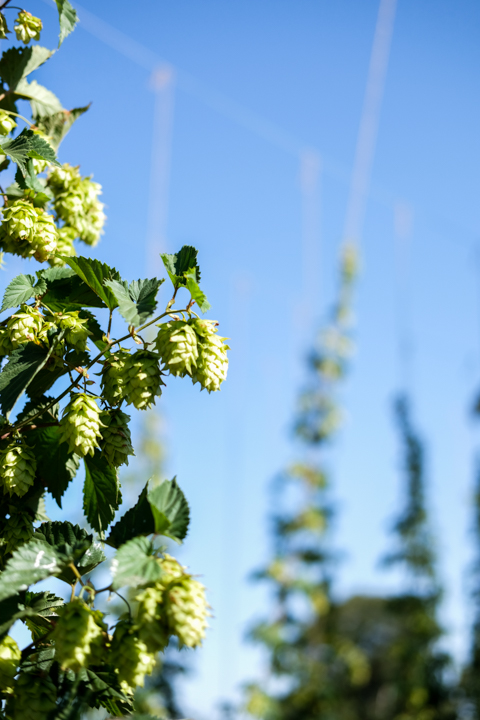 Marc’s ambition for Hills Hops remains humble. Of the 10 acres available to him, the hops only take up a few hundred square metres, and that’s unlikely to change drastically.

“Ultimately this is a hobby, it’s what we love – chooks and the veggie patch in there as well,” Marc says.

“We’ve got seven acres that we could put hops into here. But it’s still a lifestyle farm, and we still want grazing land as well. So I don’t think we’d plant every square inch out.

“We’re just taking it one year at a time. We’re not really looking to be world leaders or groundbreakers. It’s more about enjoying the process and enjoying it with the brewers, and hopefully making a dollar or two on the side to reward the effort.”

With that said, there’s excitement in Marc’s voice as he speaks of being a part of South Australia’s craft beer renaissance.

“It’s really encouraging to see guys like Big Shed and Little Bang and Mismatch and Pirate Life as well,” he says.

“Pirate Life is now conglomerate-owned, but they were the independent benchmark. Everyone was like ‘These guys are trailblazers!’ and tried to follow. The other guys that I mentioned, they’re independent guys who are actually forging ahead in only years of development, and they’re already on their second breweries, they’ve scaled up. That’s encouraging to see, and there’s very clearly a strong market for it.”

With a growing list of customers looking for local South Australian hops, it’s likely the fruits of Marc’s endeavour will pour from a keg near you very soon.