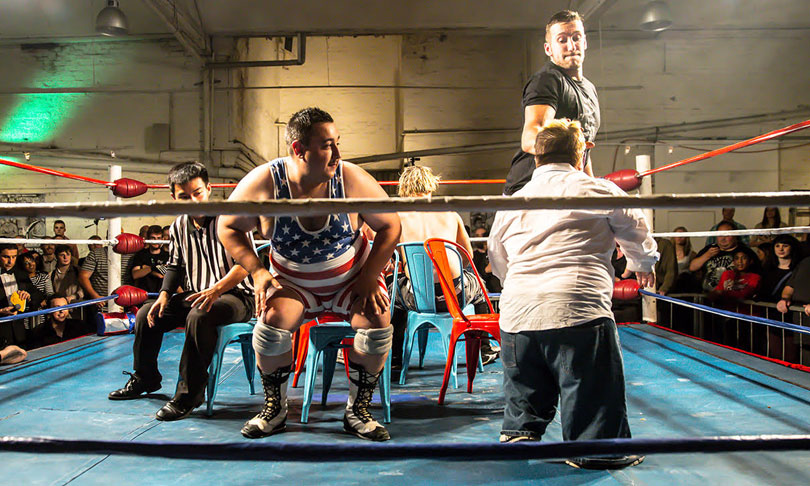 Sure – we normally plan to go have a nice glass of wine on a Friday night – probably in a laneway. Maybe we’d eat some meat and cheese too, or see an art exhibition, and then catch an EcoCaddy or Uber home.

WrestleClash happens this Friday, October 9 at Tenth and Gibson from 7pm. Tickets are available for purchase.

But after speaking with Spe Caruana – one of the organisers of WrestleClash – we’ve decided to do something decidedly different. This Friday, we’ll be watching lycra-clad bodies slamming into each other, and having a pretty good time while we’re doing it.

CM: What is the history of the event – why did you decide to bring it to Adelaide from Melbourne originally?

Spe: WrestleClash, in its current form, started as a replacement show of sorts for the very popular “WrestleRock” brand of shows that were held at the iconic Corner Hotel in Richmond. After a long hiatus, we decided to fill the void of 18+ events in Melbourne and found an awesome new venue in 1000 £ Bend. Rather than just rehashing the WrestleRock brand, myself and co-creator Rohan Herbstreit, decided to come up with a similar concept – an adults only shows with a crazy theme that could make the shows more interactive.

The move to Adelaide was based around the fact that I live here and wanted to bring this awesome brand of entertainment to my hometown. Adelaide has long been a hub for outside the box entertainment and I’ve always seen this as the ultimate “Fringe-esque” event.

CM: For those who might not be very familiar with wrestling, what is the attraction in being part of the crowd at an event like this?

Spe: The beauty of the over 18’s crowds is that we don’t have to worry about “ruining Christmas” for people by throwing out early in the peace the common knowledge fact that wrestling isn’t a “real” sport. Once people get over this, they tend to just enjoy WrestleClash for what it really is – a grown-up pantomime show. We have all the characters you could want, from the dastardly villain to the bumbling hero. The athletes in the ring are some of the best athletes and most under-rated performers in the country for their ability to engage a crowd, getting them to laugh, scream or cry at the drop of a hat.

Nearly everyone I speak to in my day-to-day life has some sort of childhood memory of watching wrestling and we can bring back these great feelings to these people.

The last point of difference for a WrestleClash audience is the theme. We’ve had everything from an Oktoberfest inspired event, a “Hot for the Orient” show and this next one, Halloween, allows the crowd to get more of an interactive experience by dressing up to suit the theme and making it feel like one big party.

CM: How will Tenth and Gibson work as a venue for the show – what was it about the venue that you found attractive for Wrestleclash?

Spe: Tenth & Gibson is one of my favourite new venues in Adelaide. It doesn’t hurt that an old, close friend of mine is one of the outstanding team that runs the joint.

It ticks all the boxes that we need for a WrestleClash event, it’s a perfect space that has the right character for a Halloween style party. The venue usually plays a large part in any event, this is not a show that could run in your typical rec hall or basketball gym. The venue adds a lot of value to an event like this and we’re able to bring it to Tenth & Gibson.

The number one highlight for the upcoming show, apart from the great matches we have on the night, is the Musical Chairs Challenge. Instead of a traditional intermission, at WrestleClash we pride ourselves on showcasing another entertainment spot. We’ve had everything from a “metre & litre” contest to Christmas themed burlesque to an awesome salsa dance off. The best of the best though was our inaugural Musical Chairs Challenge from The Great American Clash in Melbourne from 2013. What started as a joke between the boys became one of the funniest spots in WrestleClash history and we have a great crew who will recreate the magic on Friday night – with a possible addition of a lucky audience member.