PodPlay is a drama series that’s perfect for the times

What does a theatre company do when audiences can’t get to the theatre? Theatre Republic is bringing the plays to the people.

Performing arts companies usually launch their upcoming season before the start of a new year, while small organisations often don’t have enough work to justify a “season” at all.

But strange times like these are fertile ground for creative innovation – which is how Theatre Republic has come to be presenting the mid-year launch of a 2020 season of three works that shine a light on local talent and will support 30 South Australian artists.

Theatre Republic’s PodPlay series will begin on 22 June, with new episodes released weekly via Apple Podcasts.
You can also listen on the company’s podcast page.

“We had three projects lined up so we thought why not pull all three together to create a season of work and do a proper launch?” says artistic director Corey McMahon.

“We think it’s really important that there’s some sign of life in the sector.”

One of the three works, The Bleeding Tree – a contemporary gothic tale of revenge directed by Corey and featuring actor Elena Carapetis – was to have been presented at the end of August through the State Theatre Company of SA’s Stateside program, but has been rescheduled for December as a result of COVID-19.

Having suddenly found itself with a block of time that wasn’t being used for rehearsals, Theatre Republic successfully applied for one of Arts SA’s COVID-19 quick-response grants for an audio play project it’s dubbed PodPlay, which will now kick off the company’s 2020 season next month.

“It started with the provocation of, what does a theatre company do when your audience can’t get to the theatre – and the answer is you take the theatre to your audience,” Corey says of PodPlay.

“The idea of the podcast audio drama is perfect for the times we’re living in.

“We approached South Australian playwrights and asked them if they had something in the bottom drawer that was a contemporary piece of work and hadn’t been performed as an audio drama before and that is not likely to see the light of day in Adelaide as a theatre piece.” 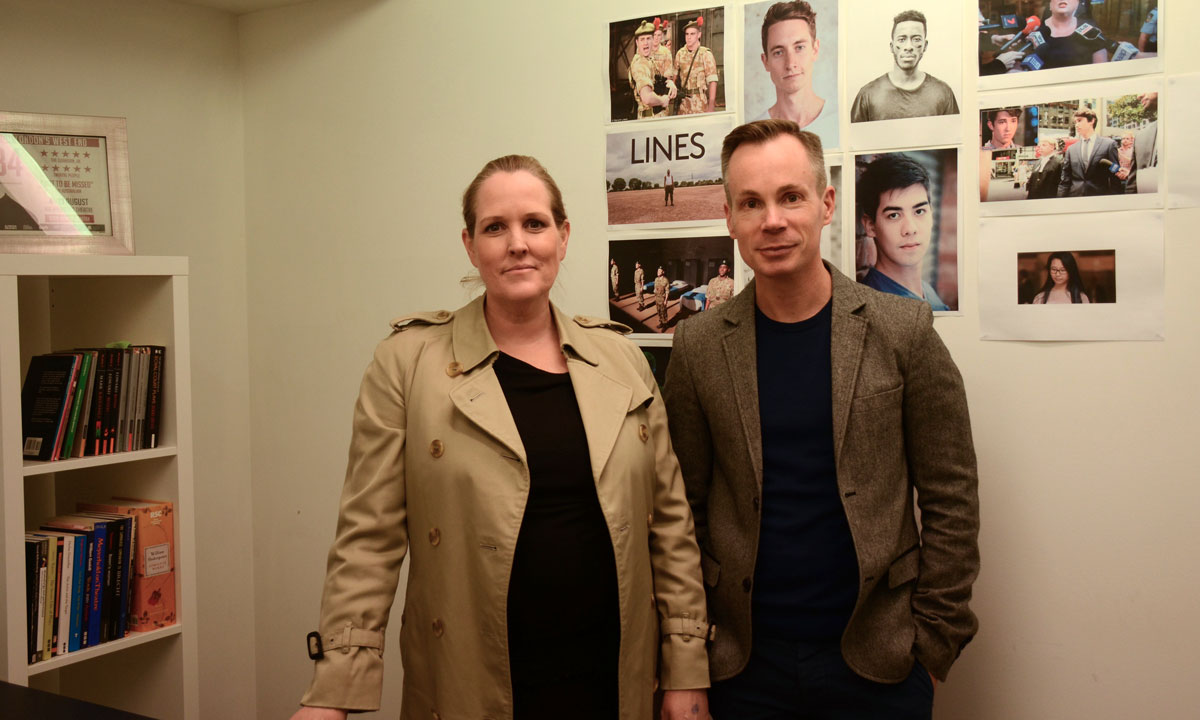 Theatre Republic pitches itself as a company that seeks out playwrights who are “bold storytellers, courageous risk-takers and shameless provocateurs”. The four writers contributing work for PodPlay are Emily Steel, Duncan Graham, Elena Carapetis and Philip Kavanagh, with each of their plays being recorded with one or two local actors and set to be released as audio dramas from 22 June.

Corey believes the stories will strike a chord with audiences. Philip Kavanagh’s Little Borders, for example, centres on a 40-something couple gripped by irrational fears and middle-class insecurities who seek refuge in a gated community.

“It’s a wickedly dark comedy,” Corey says of the play, which in 2012 won the Patrick White Playwrights’ Award.

“It’s really insightful and bang on the money in terms of those kinds of insecurities … it’s very much a play for the times.”

Elena Carapetis’s Helen is a monologue about a domestic violence victim who is reinventing herself to reclaim her power and get revenge on her attacker, while Duncan Graham’s two-hander No Exit from the Roof follows a couple who are sent to the edge when one partner is abruptly sacked and the other is found out to have been unfaithful.

The one PodPlay drama that has been previously staged in Adelaide, as part of the State Theatre Company’s Umbrella season, is Emily Steel’s semi-autobiographical work Rabbits, about a British woman who comes to Australia as an immigrant.

“It was such a compelling piece of theatre when I first saw it, so when she suggested it as a piece of audio drama I said, ‘Let’s go for it’,” Corey says. “It’s brutally honest and just really human.”

Creating audio plays is a new endeavour for Theatre Republic, and one the artistic director says it probably wouldn’t have pursued in non-pandemic times.

“It’s a reality that a small unfunded company like Theatre Republic can’t put on a full season of large-scale works year in and year out so this is a great way to create work that is more immediate and potentially has a much greater reach… it’s a way to continue to provide work for local artists and opportunities for writers.

“But we’ll never not do theatre. First and foremost, we are a theatre company and there’s nothing like live theatre.”

Corey is optimistic that by October, the team will be able to return to the physical theatre with the second work in its 2020 season, Future:Present, which will explore living in the age of climate change.

A desire to “liberate” works from the often lengthy creative process has inspired the exciting concept, which will see four playwrights given just three days to write four new short plays about the threat of climate change.

Four actors and four directors will then have three days to rehearse each play before presenting them to a live audience on the final night at Holden Street Theatres.

“Given the times we’re now living in, it will be great to get people back in the theatre with something that’s so thought-provoking, entertaining and, we hope, also fun,” Corey says.

“It is a fast and furious event that matches that urgency driving the need for action around climate change.”