Lights are back on at the Grace Emily

The beer taps are flowing, but live music won't return any time soon.

Yet another iconic Adelaide pub has returned to trade this week, with the Grace Emily reopening its doors on Monday.

The pub can accommodate six patrons out the front of the venue, 10 in the front bar, 20 in the back room and 20 in the beer garden under current rules.

Capacity will remain the same at the Grace under this Friday’s gradual easing of restrictions (75 people per room, maximum 300 people per venue), as the pub is currently maxed out as per the one-person-per-4sqm rule, which remains in place.

(Though the local media reported on Thursday that this rule may be revised on Friday.)

Sadly, live music is not on the cards at the venue for the foreseeable future.

“When we first shut, we thought the first night that we reopen it would be Billy Bob’s BBQ Jam, packed house, but didn’t really ever think that we’d have the 4sqm rule and slowly bringing everyone back in,” Symon says.

“The band room has now just got tables and chairs all set up, and on stage there’s couches and it’s extremely loungey.

“Obviously no one can stand, everyone needs to be seated, but it’s just a big loungey area now out the back. But it actually has a very nice vibe to it.”

Symon had hoped to hold out to reopen until patrons would be allowed to sit with a drink at the pub’s front bar, but with much of the city now back trading, he felt it was time to start welcoming back the regulars.

“You just have to do it. We’re opening at a very limited capacity, and hopefully we’ll be breaking even during this time,” he says.

“It’s just getting the community back and getting all the familiar faces back, because they’ve all missed the place. You just have to do it.

“It’s just weird talking over the bar to a table of punters. I was holding out for that, but that wasn’t going to happen, so it wasn’t worth not opening just for that little request that I wanted.” 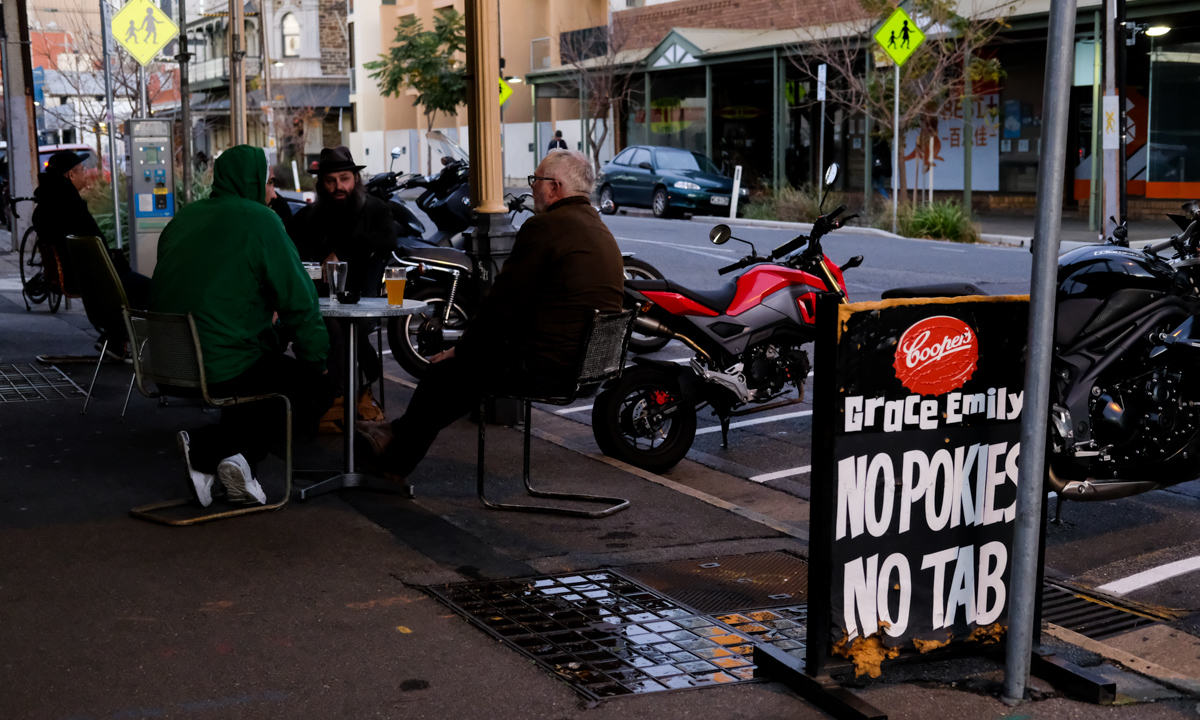 Some things remain the same

On Monday, a small gathering on the street front chatted amongst the outdoor tables, and inside there was a smattering of drinkers at tables lining the walls of the front bar, and a few more groups in the band room.

“A lot of these people just socialise at the pub, so they haven’t seen each other for a few months. It’s kind of like the pub is where they go to socialise with their pub friends. It’s just nice for them all to catch up and have a chat about the last few months.”

Even if the social gathering restrictions are reduced to one person in 2sqm, as was flagged in the ‘Tiser, Symon says live music will still not be a viable option for the Grace Emily.

“We could still only get 40 people minus the band in the band room. Usually we pack it in quite tight,” he says.

“And yeah, just the seated thing, you can’t have the seats at a gig, it would just be weird and wouldn’t work. But if they said you could have your capacity halved but people can just be wherever they want in the pub, then I’d definitely be up for that. If we had our capacity at 110 but it wasn’t designated in areas, then we’d start doing music again.

In the meantime, Symon suggests “[bringing] cards or boardgames or whatever and have a little session that way.”

Not being privy to the discussions amongst government officials about the charted course out of the coronavirus shutdown, Symon says he doesn’t have an opinion on the gradual easing of restrictions.

As the rules are redrawn and handed down, he accepts the pub must follow.

But he does have his attention trained on September – when a lot of the governmental support is set to expire.

“That’s when things might get a bit stressful, if we’ve still got social distancing,” he says.

“Because the unknown about whether JobKeeper is going to continue after September, things like rent and all that are going to come back on, so you really need to be at full capacity to start paying those bills.”

The Grace Emily is currently trading from 4pm ‘til 10pm Monday to Thursday and 4pm ‘til late Friday.