Six months ago, Little Bang Brewing were planning a new brewhouse and an expanded brewing capacity. On Thursday, when the new kit arrived, the business had instead pivoted to survival. 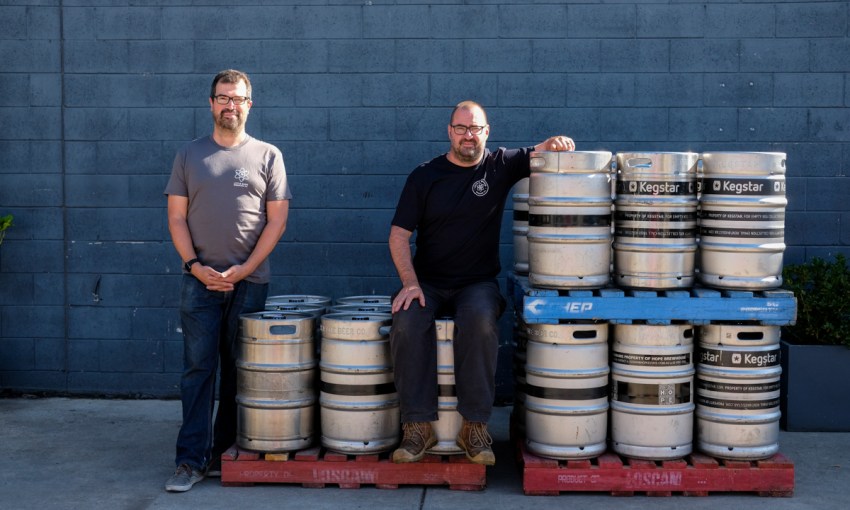 No business owner is out there clapping about the COVID-19 pandemic and saying it’s good for business. Well, no business except for Kleenex, Aqium, and maybe this tone-deaf retailer.

In our own editorial direction, CityMag has chosen to take a solutions-based, panic-free approach to covering the pandemic, in an effort to help our readers – many of whom are small business owners and early-stage entrepreneurs – organise their response rather than shut down completely and isolate in an anti-social way.

However, it’s also important for us to tell the stories we’re hearing from our readers, which is often the ‘other side of the coin’ of all the positive hustling and innovation we see happening right now.

For Little Bang Brewing Company, COVID-19 has hit at a particularly unfortunate time.

CityMag popped in to see Ryan Davidson and Filip Kemp last Thursday afternoon after our digital edition published at 3:00pm. Normally bustling on a Thursday afternoon ahead of the Little Bang quiz night, all the tables and chairs from the brewery’s entrance are stacked and cordoned off at the very back of the venue.

The furniture has been moved due to the government cautioning venues about providing seating options to their strictly takeaway clientele, but they’ve also made way for the receipt of a shipping container with two brand new brewing tanks inside.

The tanks were purchased six months ago – in what must feel like a parallel universe for the craft brewery.

The shipping containers contents were a large investment for the brewery, and, up until last week, the purchase of these two extra tanks was a sign of the continued growth and success of the Little Bang enterprise.

Now the two tanks cast a grim shadow over the brewfloor. Little Bang continues to produce beer, but for an uncertain economic future.

Little Bang’s Henry Street brewery is only 16 months old. Since moving here from their old warehouse around the corner, Little Bang has consistently seen great gains.

This was before COVID-19 put a million people across the country out of work, effectively shut down the Australian hospitality industry, and heavily curtailed the entire Australian population’s movements.

“We were gearing up to increase our volume because we couldn’t keep up with demand,” Ryan says.

“And then all this happened when [the tanks] were halfway here, and then half your business disappears.

“We were just about to upgrade our brewhouse to meet that extra demand, and that money – thank God we haven’t spent it yet – is now our war chest to deal with the next year.”

Little Bang has pivoted its business model after each of Prime Minister Scott Morrison’s major press conferences, and now operates as a takeaway bottle shop, as well as offering a home-delivery food and beverage menu, which we announced over the weekend.

But it’s not only the brewery’s trading restrictions that has hit Little Bang hard, but also the closure of all the city’s bars.

Adelaide’s craft breweries and small bars grew up in tandem, and each industry’s successes have always been intertwined: small bars could sell new and interesting beer styles to a public looking for a quality beverage experience, and every new small bar brought to market an increased number of beer taps not locked into contracts with the global Big Beer duopoly.

“Overnight our twin is gone. And it’s lonely over here,” Ryan says.

“We were helping each other, [and now] a fundamental limb is missing from the machine.”

For some small bar operators, the PM’s decision to force their closure was a blissful relief. A government directive to close then demands governmental support.

But the brewing industry has had no such directive (as of time of writing), and so Ryan and his industry colleagues must listen to the new rules, act in accordance, and hope that the offering they now provide will do even a skerrick more than just keep the lights on.

The pain is already being felt in the Little Bang family. Since the advent of the COVID-19 crisis, 19 employees have been stood down.

“We’ve got the best people we could ever ask for, and we had to let them go. It’s the worst thing we can ever go through,” Fil says.

“We’re a family here,” Ryan continues, “and the kindness of [our staff] as we just, with no notice, told them that’s it. The number of them that offered to come in and just help for no money, it fills your heart and it makes you want to fucking cry at the same time.

“Those of us that are remaining, it is our number one priority – our only job is to keep the lights on long enough to make it to the other side of this, and then build it back up to the point where we can have each and every one of them back again.”

With the operational goal posts shifted so often in the past two weeks, Ryan is cautious in his response when CityMag asks if he can visualise what Little Bang will look like in six months.

“I do have optimism,” he says. “Here’s what I think. We’re in a position now where we had savings in the bank for an expansion and we haven’t spent all of it yet.

“So, on my very loose estimation, if we fall over, that would mean 25 to 30 per cent of all other businesses in this state would have fallen over as well, and at that point a much larger government intervention would have had to have occurred… I would hope.

“At semi-optimistic… I think we can still keep the lights on for another six months, but it’s going to be basically at least a year’s worth of work undone.”

What has been most exciting for supporters of South Australia’s brewing industry has been the seemingly perpetual growth we’ve witnessed month upon month. At each visit to a brewery, some incremental shift could be noticed – be it a new tank on the brewfloor or whispers of a move to a new premises.

To hand over a $20 in exchange for a four-pack or a couple of pints felt akin to placing a brick in the foundation of this success.

Over the last two years, Little Bang, Mismatch and Big Shed have each moved into larger sites. Each move was fitting of the trajectory they were on. All they needed to do was keep selling beer.

And six months ago, this would have felt like a safe bet.

Supporting local Adelaide and South Australian producers, makers and business owners has long been the mandate of CityMag throughout our entire history of reporting. It has never been a more important concept than right now.