West Hindley Street: A new food and beverage precinct has emerged in the west

Since the introduction of the small bar licence, Adelaide has always been in search of what’s new – be it food, wine, beer, or the venues that serve them. In the quieter western end of Hindley Street, a new hospitality precinct has emerged.

The Hindley Street of popular imagination exists mostly between King William and Morphett Streets – the eastern half of the strip known for its late-night scene.

Much has changed since the advent of small bars, with the Leigh/Peel/Bank precinct carving out an oasis of responsible service amid the sea of discounted beer and two-for-one vodka sodas.

This article was produced in partnership with West Oak Hotel, Peter Rabbit and Stem Bar & Restaurant.

This culture has rippled throughout Hindley, and the effects have also flowed west, where a new Hindley Street food and beverage precinct has emerged.

People here walk at a more leisurely gait; some carry backpacks, others wear staff lanyards, but, on the day CityMag visits, at just before midday, all have come out to explore the menus of West Hindley’s favourite eateries. 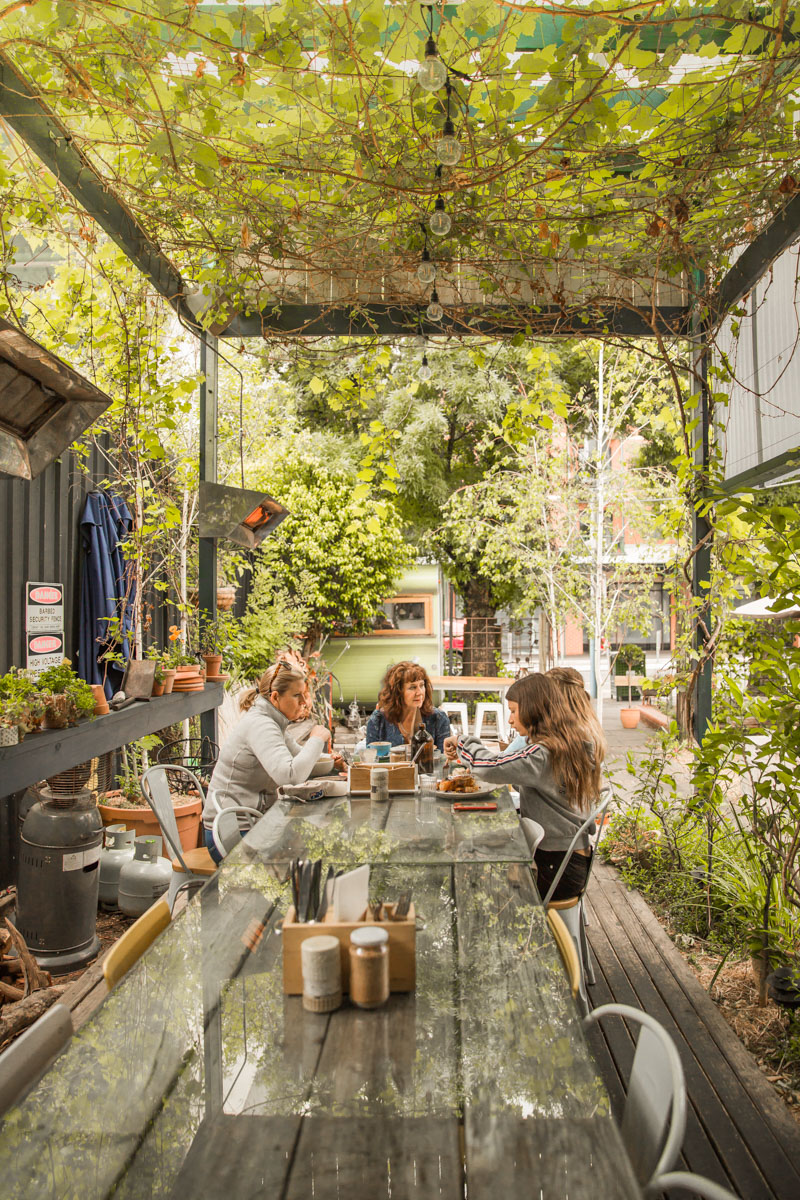 Peter Rabbit was founded early in the precinct’s evolution, and their lush garden café fills daily with the university brunch crowd. Mr Tods, the lime green caravan parked out front, serves coffee and snacks to those who’re on a time limit.

The garden is wild and unkempt in the most comforting way, and it’s hard to imagine the concrete and bitumen ‘park’ the café built over.

But Peter Rabbit co-founder Jack Nelligan says it was obvious what could be achieved in the area, even back in 2014.

“We’d been following the [Royal Adelaide] Hospital opening up on North Terrace, as well as the university expanding, and we were just walking through the city, looking for a dead space to activate, and this really jumped out at us,” he recalls.

“We initially tried to cater to uni students… the whole idea being a placemaking project to try and create a space where people could actually spend time, because around this area there weren’t any good places to even sit down and just feel comfortable in.”

The venue quickly found a broader following beyond the student crowd, and through a process of iterating and upgrading, Jack and his team built a destination venue that has carried a new crowd into the west.

Peter Rabbit now trades on Saturdays, and into the evenings on Friday and Saturday nights. 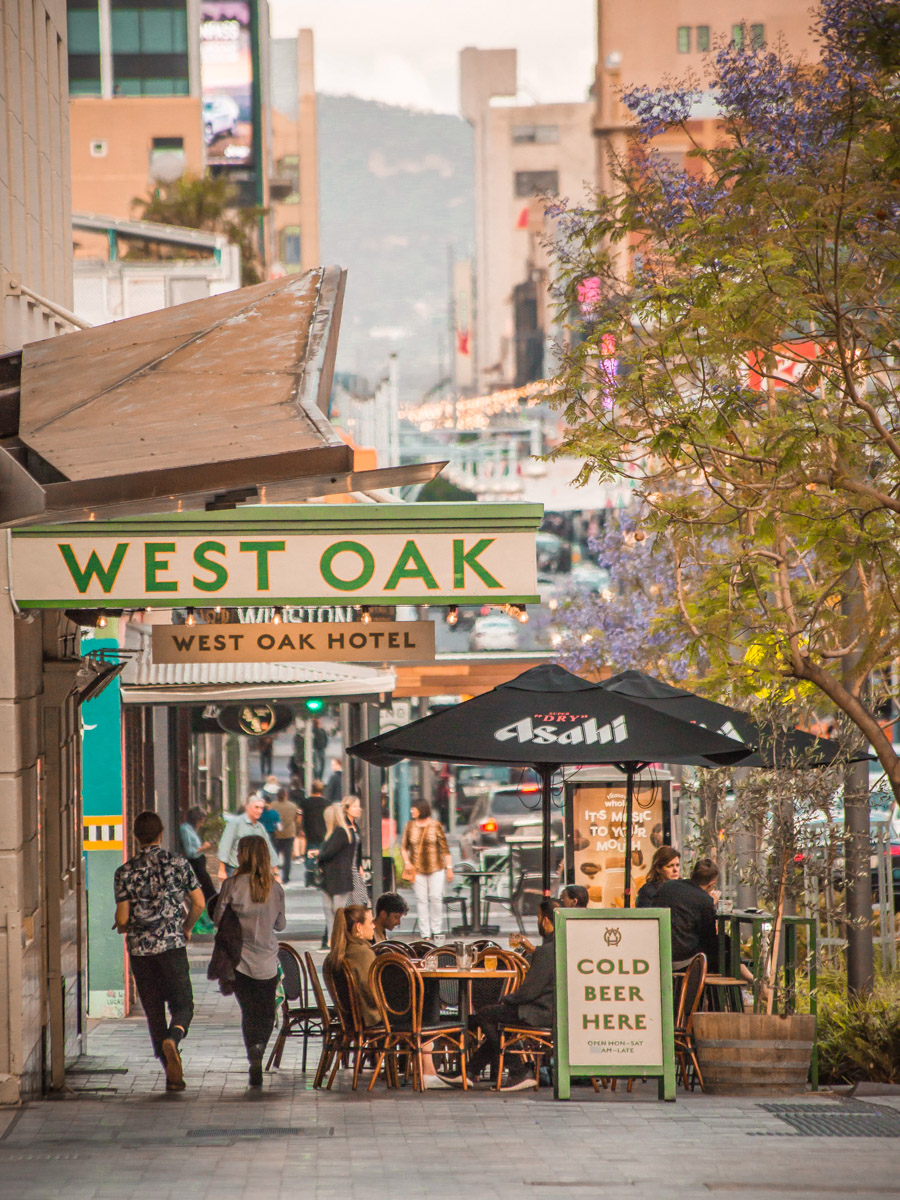 In 2017, the West Oak Hotel joined the precinct, taking over the Worldsend Hotel, and, much like Peter Rabbit before them, assumed the uni crowd would be their predominant customer base.

The students did come, looking for the kinds of things students come looking for (read: beer specials and schnitzels), but a large faction of the local clientele was also in search of a more mature offering.

“Students are obviously still a large part of what we do here, but that need for excellent food has been the driver for our change. And I think that’s what people are starting to discover about the West End.

“People come over because they know the locals here deliver great food and great service.” 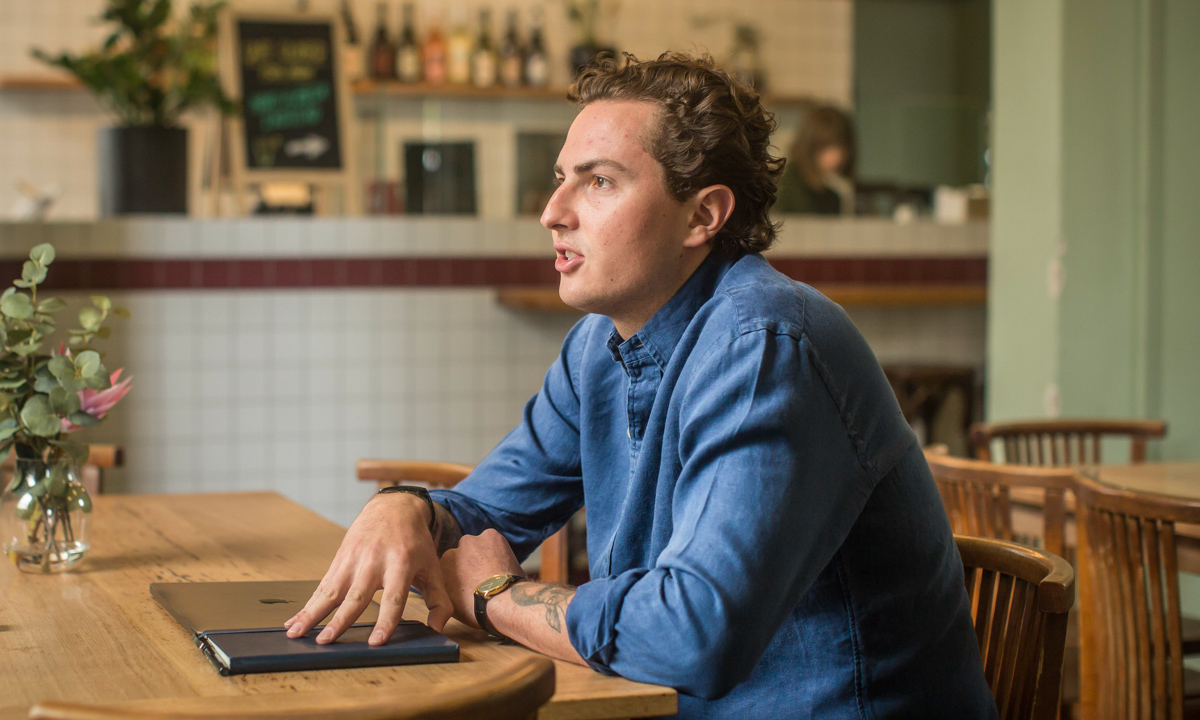 One block away, Stem Bar and Restaurant opened in August this year and brought with it the sophistication of the Leigh/Peel/Bank Street venues, with a heavy focus on wine, highly refined food offering and beautiful interior fit out.

“I was a big fan of the small bar development down the other end of Hindley Street,” says Stem co-founder Tom Paxton.

“That’s done wonders for the culture of the area, and the general demographic has changed, in my opinion, for the better, and I could see that happening during daylight hours in the area of Hindley Street west of Morphett.

“That was the potential we saw and still see in the region. And it is happening, now that there’s a group of really great places here, and all of us with a slightly different and complementary offering.”

Already the precinct effect has kicked in, with Peter Rabbit and West Oak sharing casual staff and occasionally referring customers to each other’s venues when they’re fully booked. And a natural flow between the three has emerged, with some punters starting their Friday nights with knock-offs in the Peter Rabbit garden before heading for dinner at Stem.

“The West End is crying out for more hospitality venues,” Says Tom.

“The crowd is there and I think it’s only going to grow as the density of offering increases.

“What I see happening is a similar trajectory to the eastern side of Hindley Street, and for people to recognise this as a destination in its own right. It already has happened to some extent, but I think that’ll be only further solidified.” 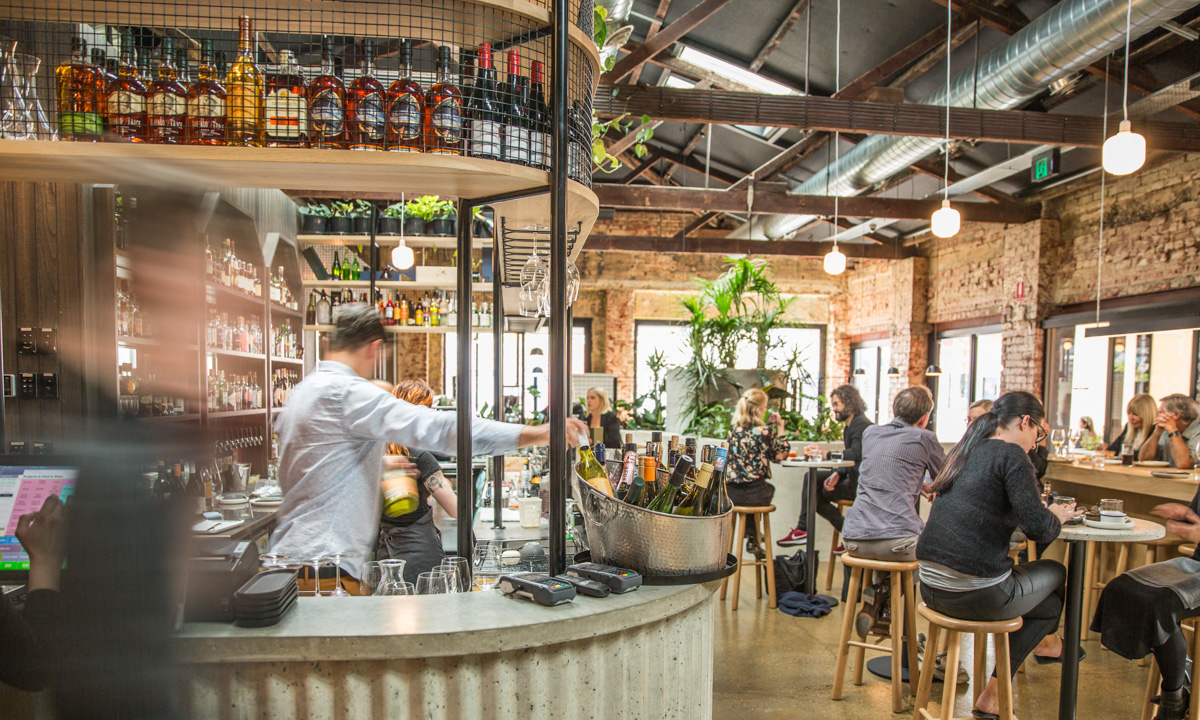 My Hindley Street with Daniel To
Co-artistic director of JamFactory 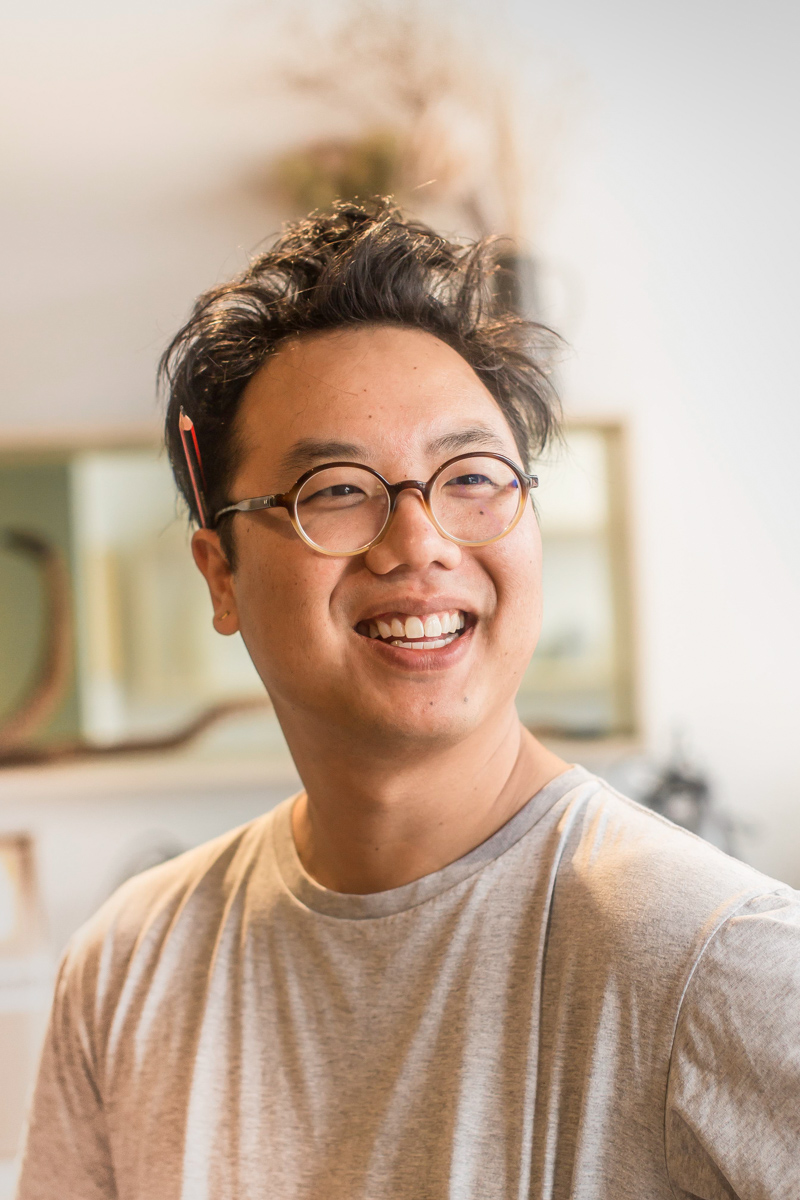 “I probably spent the majority of my post-high school life in this area. I went to [UniSA] City West, that would’ve been 2002 I started at uni there. Supermild and Worldsend. That’s what I remember,” Daniel says.

“When Rocket Bar opened and things like that, at that point in time, you started to feel like there were a few independent things happening, but then it died off a little bit. But it recently has come back again, and come back in a much better way, and, I think, in a sustainable way.

“When work finishes now, I can pop just down the road to eat pizza and have a drink, rather than go, ‘Well there’s nothing to do, I can’t be bothered going to the East End, so I’ll just go home.’

“And because businesses are staying and are able to evolve – like Worldsend became West Oak – it’s brought other people along, and businesses further down are able to stay. You can see that.

“When you look at the old Polites building, they’ve taken all the white off. For them to even think about changing what they’re doing there, there’s something nice about it.

“Things are happening properly, businesses are working, therefore people are investing and they want to move down here.

“And what’s nice is that the West Side Snack Bar is still there.”

My Hindley Street with Jason Lake
Owner of Imprints Booksellers 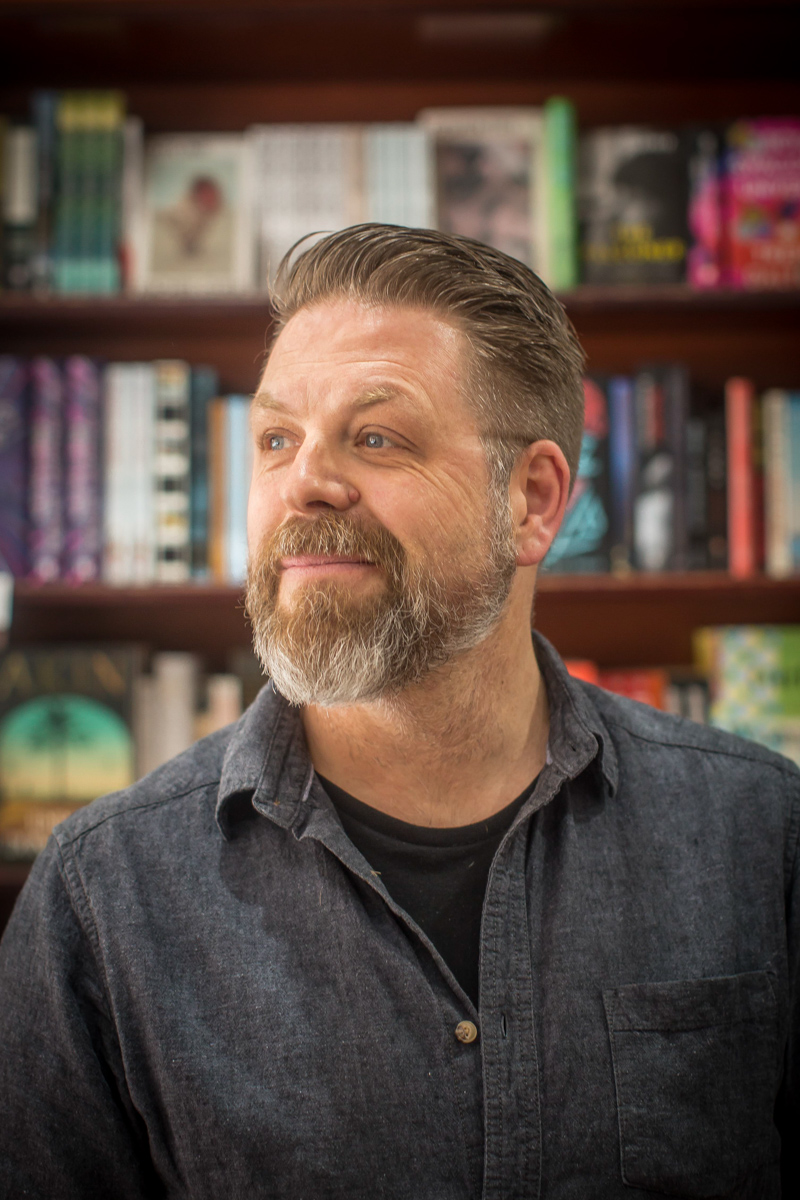 “The true West End, well that for me was Gino’s Pool Hall, where I’d go and play pool after knocking off at Third World [Bookshop],” Jason says.

“In the last couple of years there’s been a bit of a shift and we’re seeing more people on the street, certainly more foot traffic.

“It feels better now than it’s felt in a long time. There’s life on the street, and it’s quite diverse. It’s very colourful.

“There’re many reasons to come down here. We’ve got a couple of good pubs now, the West Oak Hotel is great. There’s a lot more life there than there used to be.

“I think it’s becoming more of a destination because of the eateries that are there, with Stem opening up especially. But Levant’s there, and Stem, Peter Rabbit of course.”