This is a new era for The Strathmore Hotel

Over decades, as the Adelaide CBD has evolved, so too has the Strathmore on North Terrace.

The pub was bought by the Basheer family in 1972, a time long before most of the current landmarks of the western half of North Terrace were constructed.

In 1985, the Strathmore received its first major upgrade under the Basheers, in line with the launch of the Adelaide Casino across the road, and just ahead of the Adelaide Convention Centre in 1987 and the Hyatt (now InterContinental) in 1989.

The pub received another major renewal in 1999, to modernise its built form ahead of the turning of the century.

In the two decades since, Adelaide’s northwest has changed dramatically – with the addition of SAHMRI, the new RAH, an upgraded Convention Centre, and the Adelaide Oval and its accompanying footbridge.

And there is yet more to come: the Adelaide Casino’s redevelopment is in its incremental stages of launch, the Walker Corporation’s golden hotel tower is almost finished, and the redeveloped Festival Centre Plaza is slated to be completed in its entirety (COVID-willing) by 2022.

The Strathmore Hotel’s Managing Director, David Basheer, has seen the vision for the new North Terrace and Riverbank precinct, and saw incredible opportunity for his family-owned small business.

After five years of planning and 12 months of construction, the new-look Strathmore Hotel has launched. 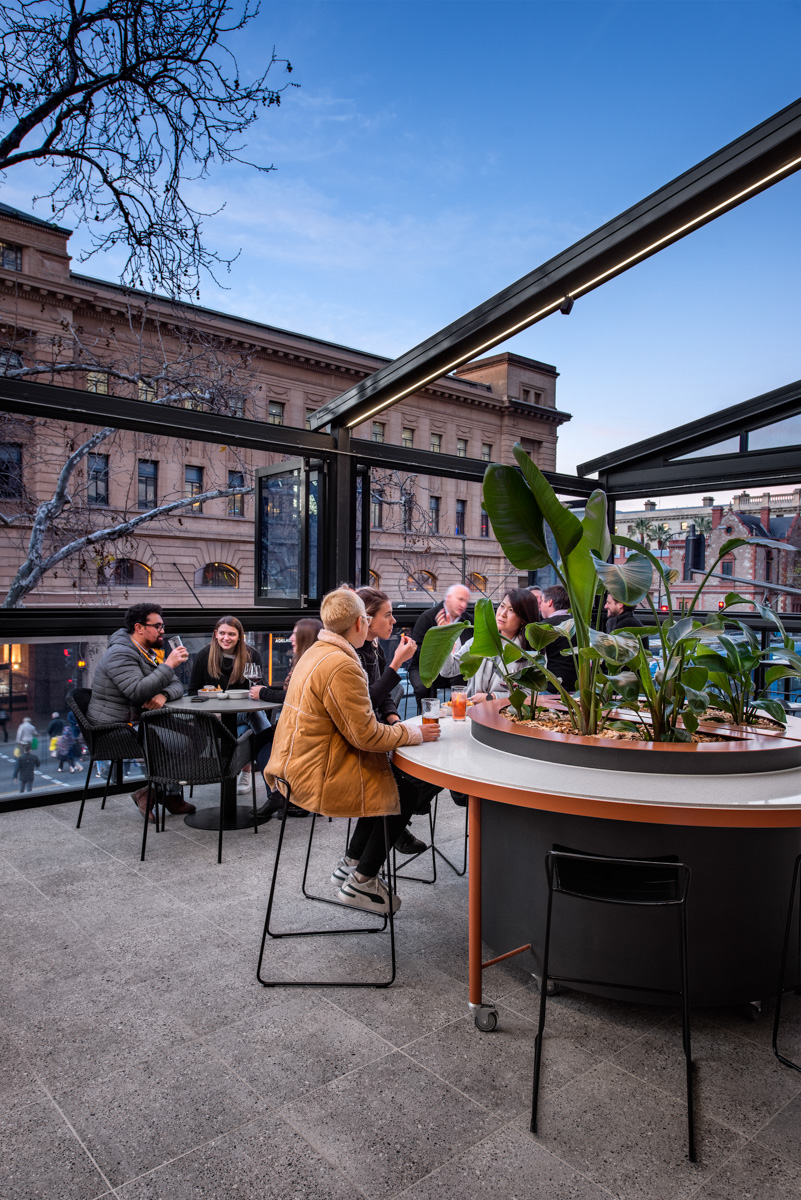 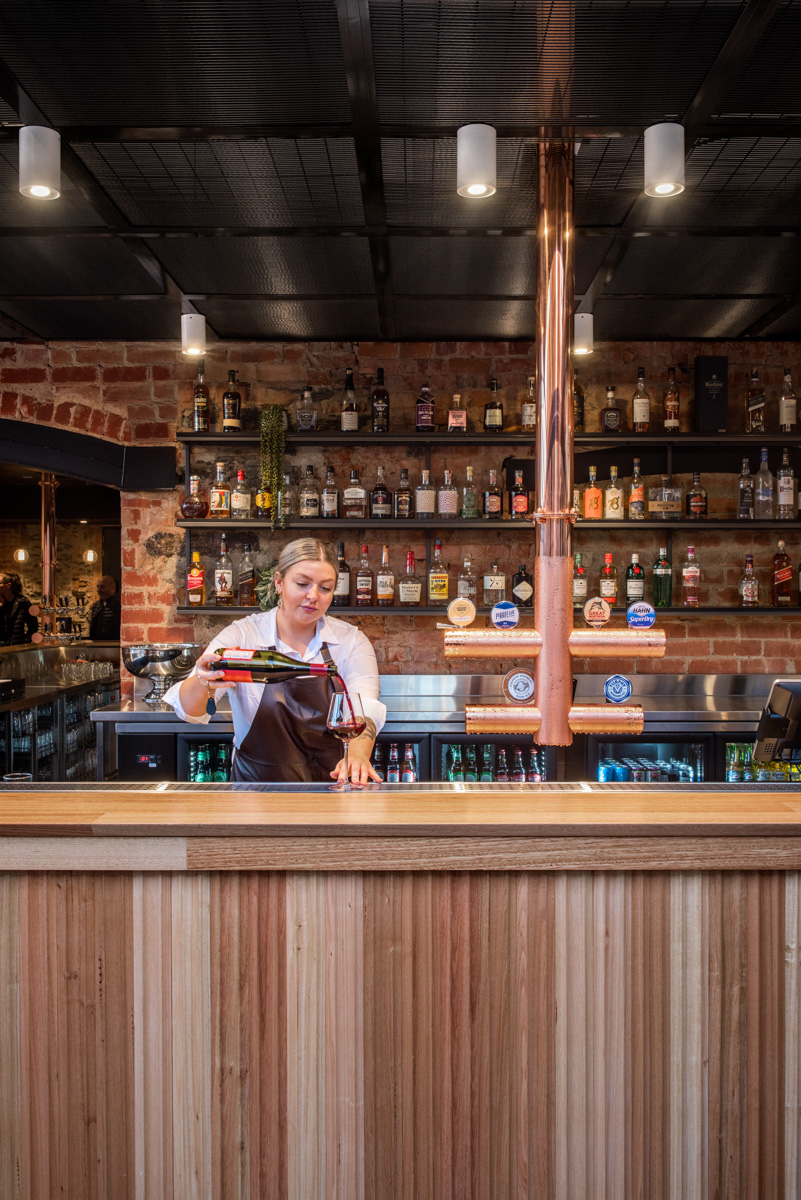 Above and right images by David Sievers

“The renovation was really done for us to fit in with what’s around us,” David explains.

“Our approach to the renovation was, the ground floor was evolution, the upstairs was revolution.

David contracted the team at Studio Nine to reimagine both the upstairs and downstairs spaces.

The new ground-level identity, Café One Two Nine, features exposed brick (found beneath layers of Gyprock), a broad and open view across the restaurant floor into the kitchen, and new connection with upstairs created by a double-height void created by cutting through the first floor. 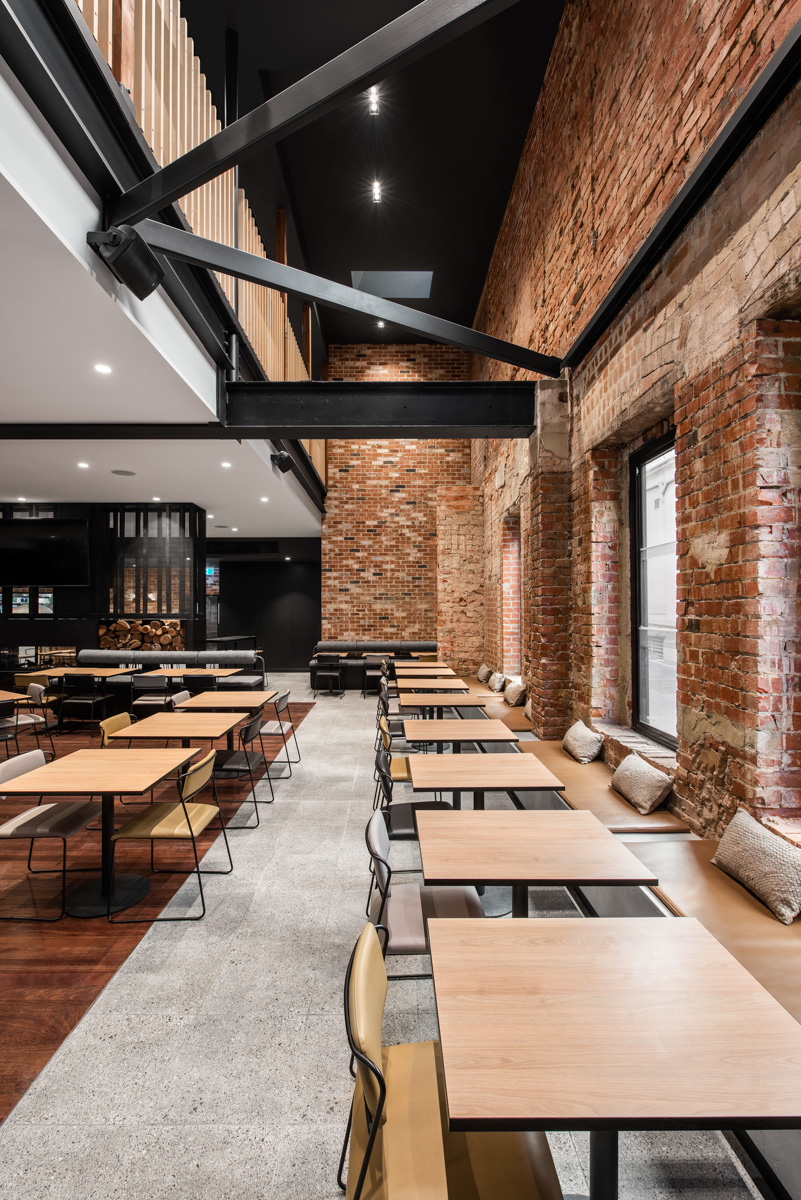 A stipulation in the design brief was that the Strathmore must remain the feeling of a pub, and this is evident especially so in Café One Two Nine’s food and beverage offering.

The Stonegrill steak offering, which the pub brought to Adelaide in the ‘80s, is still a major feature of the menu, as are pub favourites like burgers, schnitzels, wood-fired pizzas.

Upstairs, however, the revolution has been dramatic.

Visually, the space is comfortable and sleek, with plenty of smaller spaces etched out across the room, rather than the “beer hall” vibe of years gone by, as David describes it.

In addition to the multiple dining and lounge areas, there is a function room available for bookings and equally suitable for corporate meetings or birthdays and other milestone family events.

The balcony, now named the Verandah, has been reconstructed, with special effort made to connect the energy of the pub with the bustle of the North Terrace below.

An operable roof and bifold windows mean the Strathmore’s upstairs bar and dining area can adapt to the seasons – allowing just as much connection to the street come summer heat or winter rain.

The Verandah Bar & Dining offering has been entirely reconsidered, with higher-end beer, wine and spirits available at the bar (much of which is South Australian) and a new focus on South Australian produce.

“We engaged Simon Bryant as a consulting chef, and what Simon did was open our eyes to a whole range of local suppliers that we didn’t even know existed,” David says.

“His knowledge is ridiculous. If he doesn’t know about it, it hasn’t happened yet. He’s so smart, and he’s very easy to work with, and so he really put the polish onto Matt’s menu.” 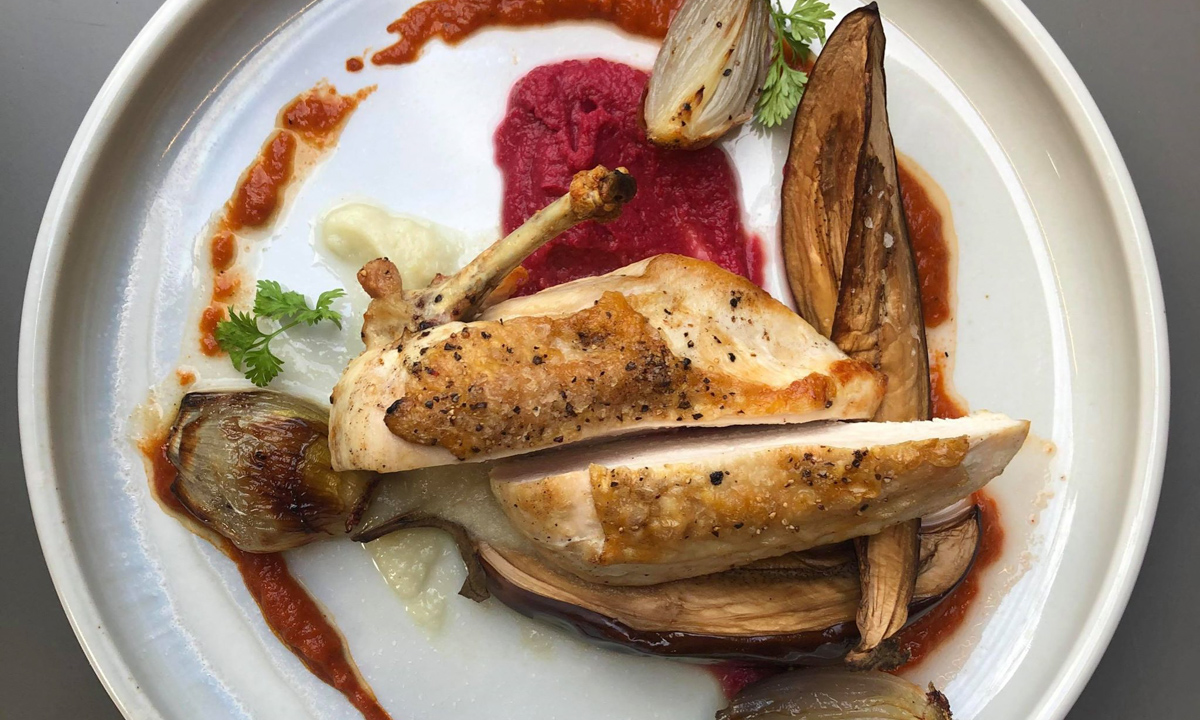 The admiration of local produce has been a slow-burning trend in Adelaide’s restaurant scene for some time now, and the move made sense for the Strathmore, David says, because it plays into a major segment of the pub’s market base – tourists.

“The restaurant up here is South Australian-themed. That was aimed at the tourists in the area, domestic and international,” David says.

“We’re not seeing many of them at the moment, but we decided to still do that, because that’s who we’re going to be in twelve months, two years, five years, let’s open that way.”

This future-focussed view of the city has served the Strathmore well over its 48 years with the Basheers, and staff report Studio Nine’s work and the reinvented menu has been received with great adoration amongst locals.

“We’re just, every day, blown away by the customer reaction about how good it is,” says hotel manager Tim Reimann

“The experience from… the look and the feel of the venue, and then the service and the food, yeah, it’s outstanding.”

David speaks with excitement about what will become of his evolving North Terrace neighbourhood in the years to come.

“It’s always been a great location,” he says.

“I think we’ll see over the next five or 10 years, this is where the action’s going to be.”

You can find the Strathmore at 129 North Terrace, Adelaide. Check out the menu online, and connect with the pub via Facebook and Instagram. 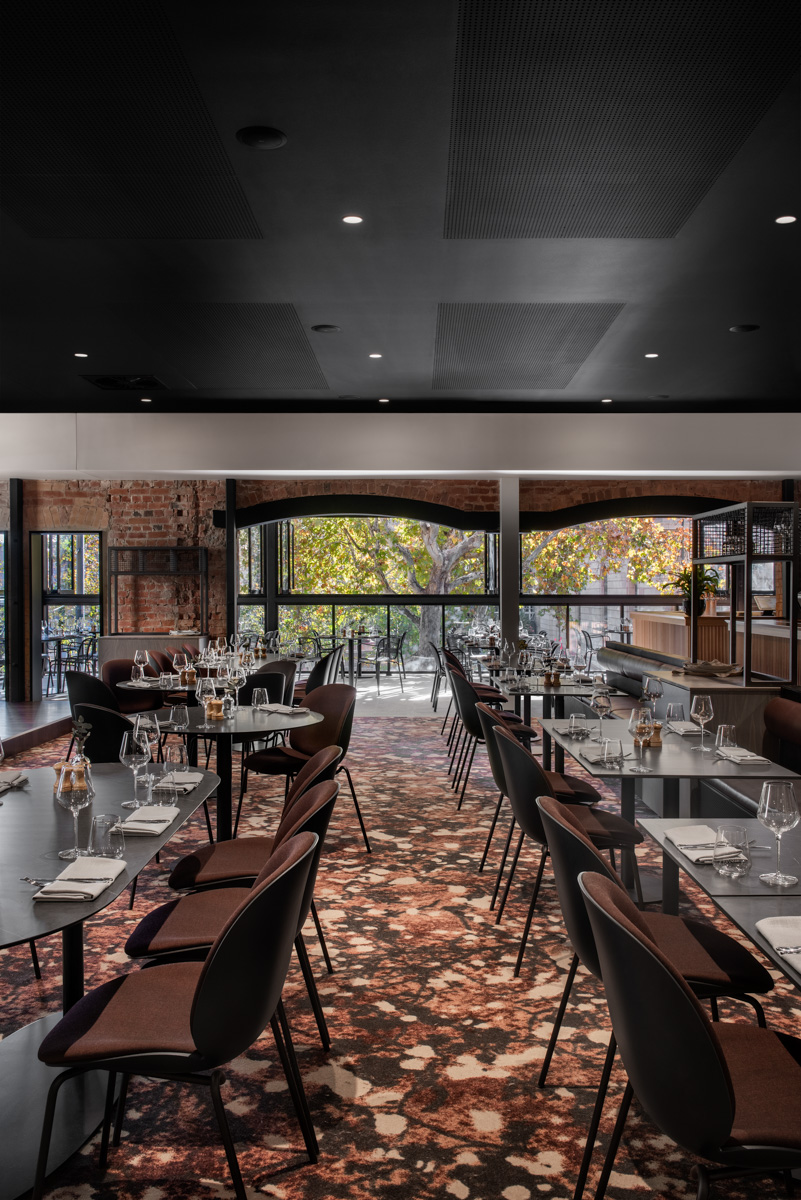 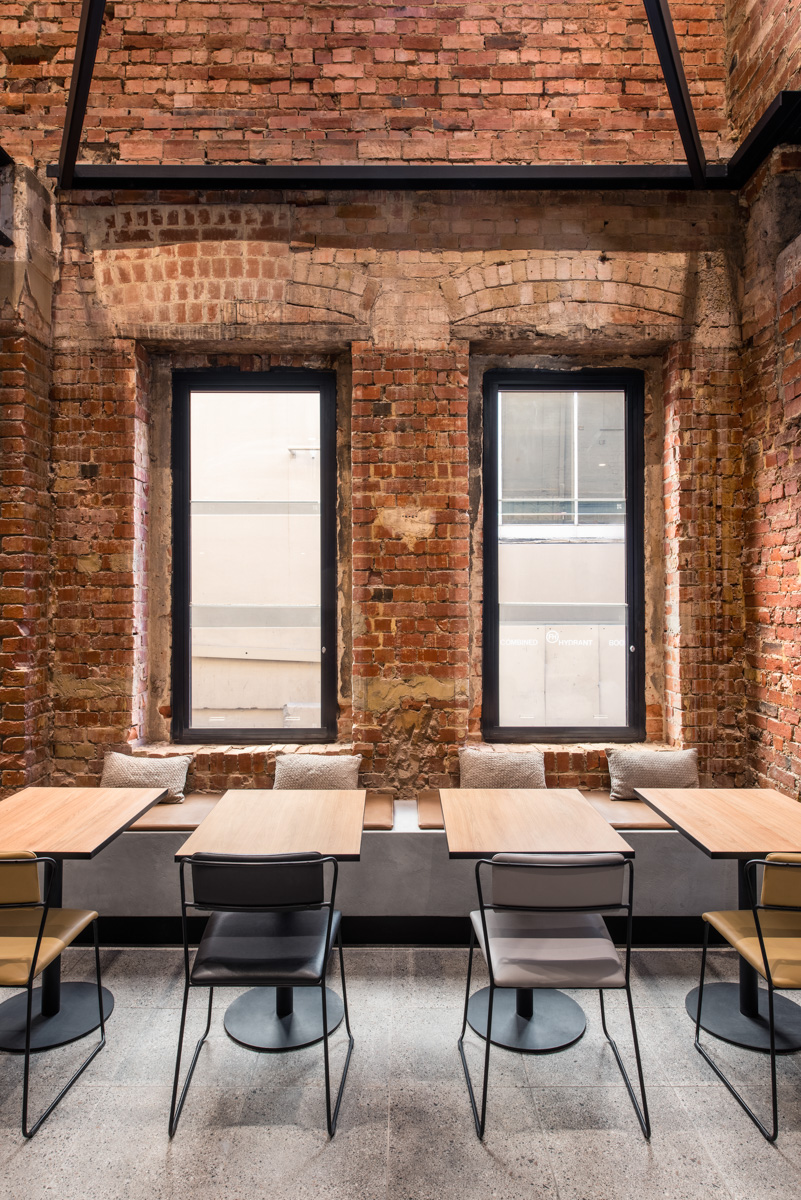 Above and right images by David Sievers