Neil Sachse and the long way ’round

He was knocked down in a VFL game of Aussie Rules Football in 1975, but Neil Sachse always gets back up.

Forty years on from that fateful second round match for Footscray, where a tackle left Neil paralysed, the ex-footballer turned disability advocate is a livewire when we visit him at his home and office in downtown Adelaide.

He’s on the eve of raising his second million and halfway to funding his foundation’s next project. And when we arrive for our interview, he’s darting between rooms in an electric wheelchair.

You, Me, City is a companion publication to The Adelaide Design Manual – a joint resource created by the Adelaide City Council and the Government of South Australia to help the state move forward into the next, exciting stage of our audacious city planning experiment.

We can see a large format framed photograph of the MCG, propped up against a table on its side, covered in signatures.

“That’s from the Crow’s first Grand Final — it’s signed by Malcolm [Blight] and the team,” says Neil. It belongs to the stockpile Neil turns over as part of his fundraising efforts.

Neil’s life is full of rich and rewarding experiences and he remains connected here in the centre of town. However, it’s one thing to be mobile at home and another thing entirely to be mobile in the public realm.

As part of Neil’s current fundraising efforts he’s collaborating with researchers at the South Australian Health and Medical Research Institute (SAHMRI). Neil has a desk there and regularly rolls across town from Wakefield and Pulteney where he lives to North and West Terrace for work.

This trip, no matter how many times he makes it, is far from smooth sailing. The fabric of our city touches his wheels in a completely different way to how it touches feet.

On the lift ride down to ground level Neil pipes up.

“We should have done this on a Wednesday,” he says after we finish explaining we want this article to capture the way the world looks to him as he moves through it.

“It’s rubbish bin day Wednesday. Rubbish bins at eye level. So many of them — all lined up along the footpath ­—
sometimes I can’t even get out of the door,” he tells us.

“I took my granddaughters to Victoria Square this year,” says Neil while we wait for the lights to change. “They’re aged 11 and eight and they wanted to go down to the Tour Down Under village in the Square to collect all the free things.”

The fabric of our city touches his wheels in a completely different way to how it touches feet.

Neil tells us about getting to the Square and losing the girls. “They’d gone skipping on ahead of me as often they do. But I couldn’t follow them and, I’d had to take the long way ’round. When I got to the other side though, it had taken me too long — I’d lost sight of them and couldn’t see them any more,” Neil says with the living memory of his fear and responsibility as a grandfather very present.

We’re taking Wakefield Street to Victoria Square where Neil rolls onto the tram that he takes to SAHMRI.

“I could probably get to SAHMRI and back on my battery,” says Neil. “But I like to conserve battery wherever I can.”

When asked about the trams and whether he finds them beneficial – his face lights up.

“The trams are fabulous,” he says. “They really are fantastic for me. They’re so different to cars and buses, the way they move and take corners is so different. I had a terrible experience on a bus once. The driver came into a roundabout too fast and hit the brakes, I very nearly came out of the chair. If my wife wasn’t there to grab me I would have been in the aisle.”

Neil points out how lovely and wide the footpath is. We’re on the south side of Wakefield Street, passing the Fire Station. The bitumen is brand new and the trees have a spongy sort of material at their base. A smooth flat surface as far as the eye can see.

“But why didn’t they finish it?” asks Neil. Unsure what he means we ask him to explain.

“The access,” he says matter-of-factly. “They upgraded the footpath but then the access has been left the same.”

Looking ahead, our luxurious three-metre-wide footpath hits the street at the curb with only a small, maybe 70 centimetre-wide scoop, left for Neil to roll down to cross the road. 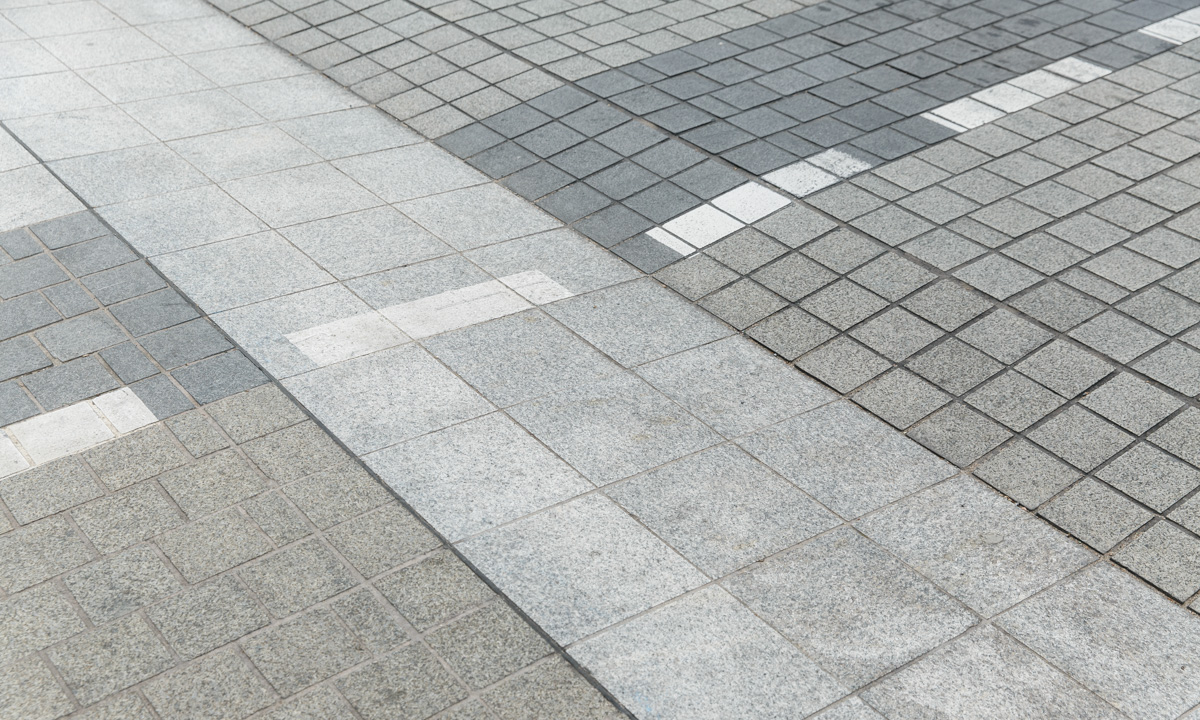 The scoop hasn’t been upgraded in the same way as the footpath. And like so many of this design they lack a uniform angle and length. Just in the small distance between Neil’s House and Victoria Square we’ve counted five different styles of ramp or scoops that Neil needs to navigate.

“The worst ones create a ‘v’ shape,” he says. Unsure what he means, Neil pulls up at an intersection to show how the road’s camber falls into the gutter sharply. This causes his feet to scrape on the ascending slope due to the fact that his front wheels are in a ditch. The very design that’s meant to make the footpaths accessible for Neil becomes a literal sticking point for his independence. If the scoop was wider he could approach at an angle and avoid the scraping but, well, some are wide and some aren’t.

When asked if perhaps wheelchair companies should be building more agile and robust chairs that can better navigate bi-pedal-only environments, he explains that being paralysed is about compromise. Of course it is. But what’s not obvious is the layers of compromise.

Making a great city means creating a place that is accessible for everyone. The Adelaide Design Manual provides guidance for balancing the needs of pedestrians, cyclists, public transport, vehicles and all age and mobility capabilities for the streets in the City of Adelaide. Find out more at adelaidedesignmanual.com.au

“Sure, I could get a bigger chair and some people do have robust chairs but I work,” says Neil. “I have to choose the least worst option. I’m tall, so my feet are necessarily lower because my knees need to fit under a desk. It’s also next-to-impossible to move around an ordinary home in those larger chairs.”

Layers upon layers of compromise as each different access point, with its different materiality, different angle of incline and camber make sure Neil never forgets he has a disability.

But that doesn’t stop him from celebrating the city’s accessibility. Along our journey he points out some of his favourite spots.

Neil is a big fan of the scramble crossings and the new count down timers. He particularly enjoys the level access at the east end of Rundle Mall, no bump or curb between Pulteney Street and the Mall makes him smile. As the tram passes Bank Street on North Terrace, Neil takes pains to point out how the road has been built up to the level of the footpath. “That’s fantastic,” says Neil, “the cars are encouraged to make eye contact with pedestrians and everyone just sails across the street.”

And that’s the key for Neil — that everyone is included.

“I just go where I gotta go,” he says at the end of our trip together. “But,” he continues, “it would be nice to feel like you’re a part of it all, rather than left out.” 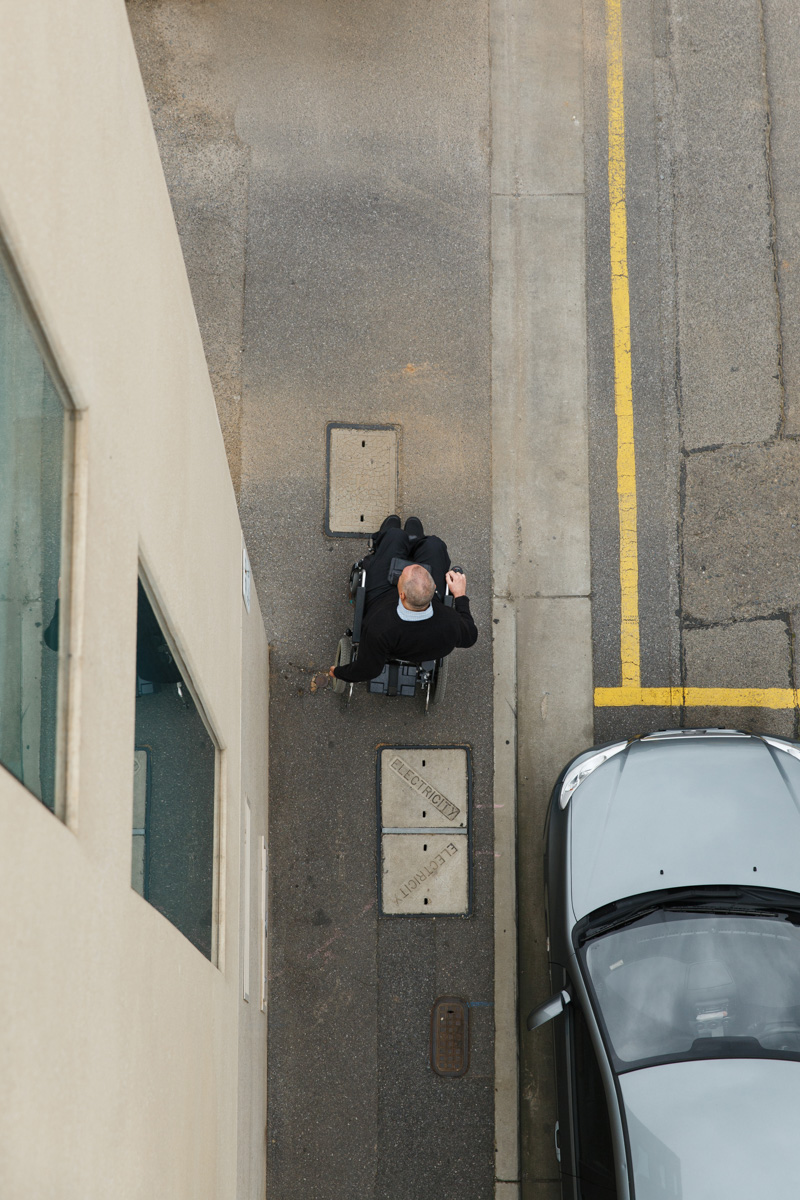