Could this be the greatest party band of all time?

Furnace and the Fundamentals are bringing FURNAPALOOZA to the Adelaide Entertainment Centre for the Adelaide Fringe. 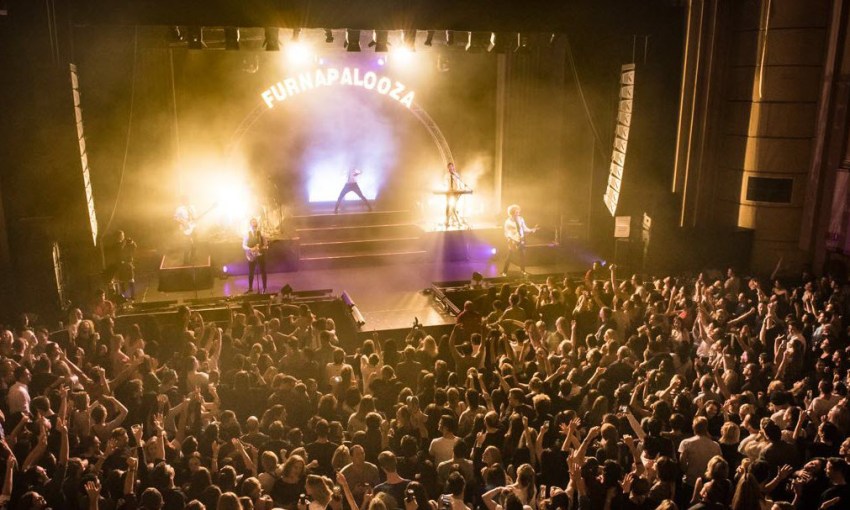 Hamish Rosser has called them the “best cover band in the country,” while Hot Dub Time Machine dubbed them “simply the best party band ever,” and now Adelaide will be able to be the judge as Furnace and the Fundamentals perform their signature FURNAPALOOZA at the Adelaide Fringe for the first time next week.

This article was produced in partnership with Adelaide Venue Management.

It’s a one night stand at the Adelaide Entertainment Centre on Saturday, 29 February, so anyone who wants to party to everything from Beyoncé to Dirty Dancing to The Lion King (Yep – The Lion King) better get in line for tickets to what they’re calling the ultimate Fringe Party.

The band, made up of six Sydney showfolk, is known for its over-the-top antics and raucous live shows, and FURNAPALOOZA promises to top all that.

The show is billed as an exhilarating, non-stop party set of the greatest songs of all time, accompanied by a mind-boggling, memory-triggering matrix of music footage on the big screen, light up suits, inflatables and more dance-floor anthems than you can count.

And if you can say all that in one breath, you’re fit enough to keep up with them.

Furnace and the Fundamentals have set dance floors alight at Falls Festival, St Kilda Festival, Edinburgh, Royal Ascot, the British Grand Prix and New Year’s Eve on Sydney Harbour, and are now ready to take on the crowds of the Adelaide Fringe.

“High energy, entertaining and engaging, we couldn’t think of a better way to make our debut as a Fringe venue.

“We’re pleased to also share that in the wake of devastating bushfires in the Adelaide Hills and Kangaroo Island, a portion of ticket sales from FURNAPALOOZA Adelaide will be donated directly to the SA Bushfire Appeal.”

It’s only for one night – a night you won’t look back on with regret – and five bucks goes to helping South Aussies. Win, Win, Win.

See a primer below:

Tickets are on sale now – $39.50 per person or $30.38 for BankSA Cardholders – for the show at the Adelaide Entertainment Centre Theatre at 8pm on Saturday, 29 February.