Deep within Tulya Wartli, far from the airborne grit of Port Road, there is a wide expanse of lush grass, fringed by parking spaces, a popular public barbecue, the Bonython Park Playspace, and now, Adelaide’s first native bee hotel.

This piece was produced in collaboration with the City Of Adelaide.

Nicknamed the Bee BnB (and marked with a vaguely familiar logo), the construction of this stack of concrete blocks, loose rocks, and punctured timber signals the start of a multi-council initiative to stimulate the native bee population in Adelaide, with eight councils involved spanning from the Hills to the sea.

Maria Zotti from the City of Adelaide.

The City of Adelaide kicked off the project after being approached by the City of Charles Sturt, and so far it’s been all too easy to get people involved, says City of Adelaide’s manager of sustainability policy, and hobby apiarist, Maria Zotti.

“The bee hotel project is a biodiversity and community engagement-type project, and it’s a little project in terms of the types of projects we do, but it’s been one that has really captured the imagination of the community,” she says.

“It shouldn’t have surprised us but there’s been such an appetite for this in the community, and I think it’s because of the awareness of the plight of bees worldwide and their decline.”

Native bee species are not responsible for pollinating the majority of Australian crops, do not create large amounts of honey, and tend to live alone rather than in hives, making their role in the ecosystem less visible than their European cousins, who, despite suffering major a major decline in population worldwide, have a more widely understood role in food production.

One major outcome Maria hopes to see from the project is an increased understanding in the community about the importance of supporting bee populations, but the Bee BnBs, which can also be found at Wirrarninthi and Tainmuntilla, will also help increase the number of native plants and maintain a diverse ecosystem in the Adelaide Parklands.

“In the Parklands we have key biodiversity areas, which are remnant vegetation from pre-European times that we’re protecting and enhancing, so we looked at some of the areas that were along the Torrens and chose those spots that were the most accessible,” Maria says.

“The key thing for us is we want people in the city, or throughout Adelaide, to plant plants for bees, in particular native bees, and you can do that in your backyard, you can even build a little bee hotel if you want to provide some habitat.”

The native bee BnB working bee at Tulya Wardli on 19 May. This image: supplied.

As more light is shone on the dire circumstances of bee populations across the world, the trend of urban beekeeping has grown, aided in no small part by an international food culture that pushes the practice of foraging and hyperlocality above sourcing globally available produce.

Hindley Street café and restaurant, Peter Rabbit, recently reinstated its rooftop garden and has now installed a beehive, which will supply its kitchen with honey and, co-owner Jack Nelligan hopes, will encourage others to take up the practice of urban beekeeping. 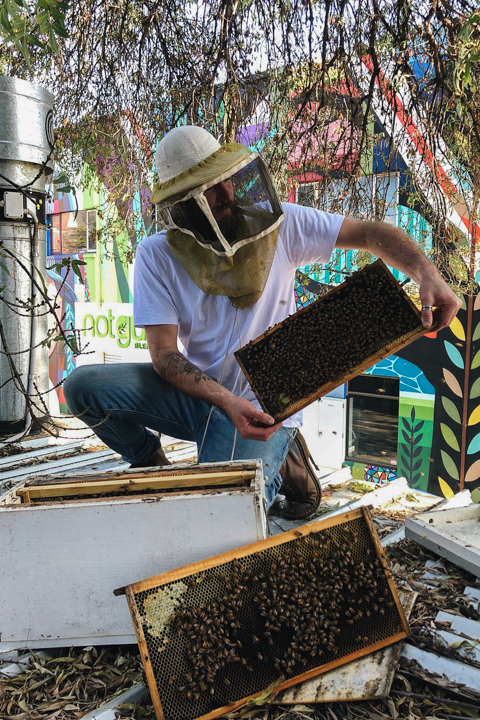 “That [hive won’t] sustain us as a café, we’d probably go through maybe 120 kilos a year, but for the environmental benefits and the education and raising awareness, I think that’s a lot of the reason people get into it,” Jack says.

“When we brought the hive up, people were asking questions. It’s really cool,” Jake Leske, the apiarist looking after Peter Rabbit’s hive, says.

“There’s not that many people that really know how it all works and the ins and outs of it, so it’s good to get people involved.”

While both Peter Rabbit’s hive and the three Bee BnBs installed by the council will be relatively inactive over winter, come springtime they will begin to hum, and it’s Maria’s hope that each site becomes a popular spot to take time out and observe nature.

“The areas we chose are pretty, beautiful areas, and we’re putting in seats and interpretive signage, so we want people to take a seat and spend some time watching the bees,” she says.

“They’re a spot for learning, contemplation, and wellbeing in the city as well, so there’s that too.”