“My attitude to heritage is you should use a firm but sensitive hand,” Damien Chwalisz tells CityMag as we’re shown through a property in Crafers that was, up until recently, little more than a ruin held together by a blackberry bush.

Five years ago he was contracted by his client to bring life back to the property sitting adjacent to the heritage-listed Arthur’s Seat.

Thought to be its stable house, the ruin started life in the mid-19th century and was converted to a residence in the 1920s, then added to in the 1970s, before inevitably succumbing to the 1983 Ash Wednesday bushfires.

In the 30-odd years since, the site became heavily overgrown, but that didn’t hinder the nostalgic attachment of Damien’s client.

“The owner… her best mate grew up here when she was in her teens… so she remembered it vividly,” Damien says.

“She had all these memories in her mind from it, and it was just a skeleton, a really decomposed ruin, but she could see its former glory.

“And [her husband] was head of history and politics at Adelaide Uni, so he knew the site and the history of [Arthur’s Seat], and so she had this personal nostalgic attachment to it, and he had an intellectual attachment to it via its political history.”

Damien was approached to pitch for the job against two other architects, and it was his willingness to interact with the crumbling structure that won him the project. 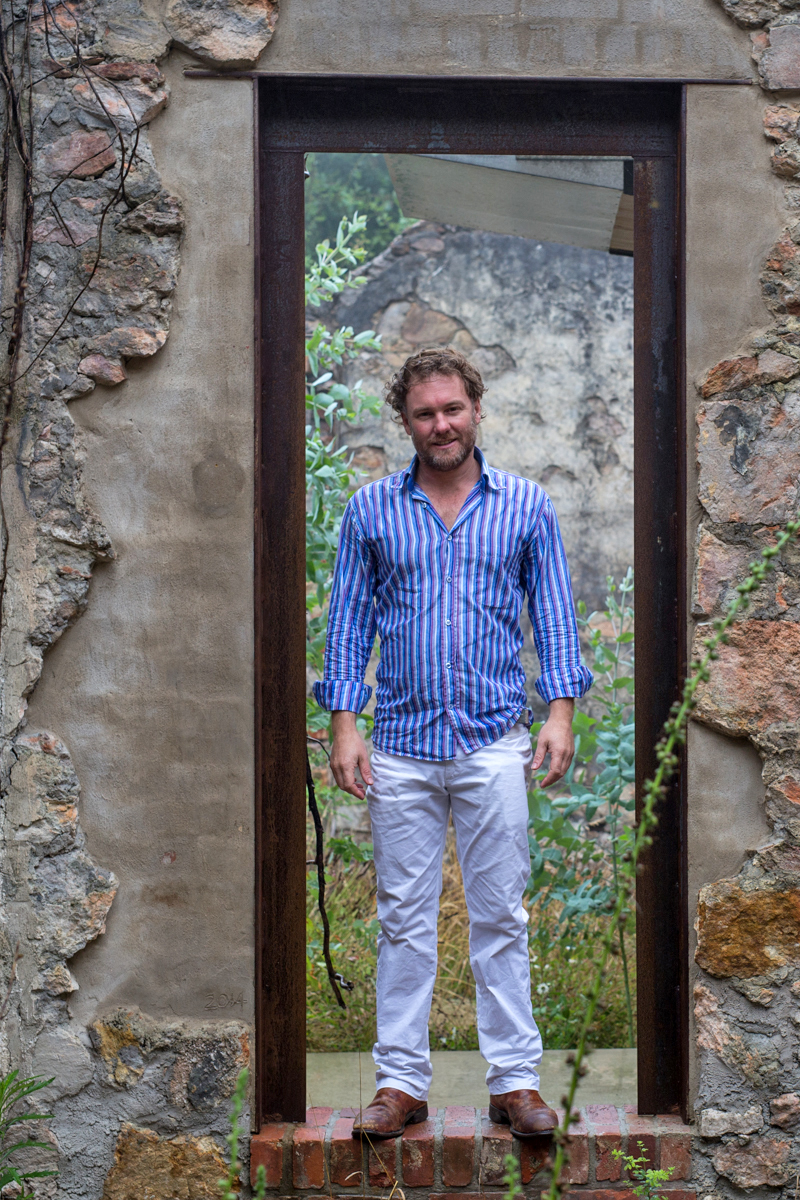 “When we pulled back all the trees and unwrapped what the ruin was, we realised it was so decrepit that if you didn’t touch the ruin, if you didn’t actually try and engage with it, it would’ve been a pile of rubble by this stage now,” Damien says.

“By taking the risk and engaging with it, we’ve actually probably saved it.”

Hikers walking the Heysen Trail will have noticed the restoration’s burnt orange façade through the foliage – a deliberate choice to hint at the building’s unfortunate past, and to contrast with its green surroundings, much like the new structure itself contrasts modernity against time-weathered brick.

The colour is bold, but so is the task of rejuvenating a ruin.

Originally, the brief was for a two-room weekender, a getaway in the Hills with a place to cook, dine and sleep; but as time progressed, the potential of the site was realised and the job expanded.

“The project was for a more impromptu piece of architecture,” Damien explains.

“Then they thought ‘We love it so much we want to live there,’ so then it was ‘Alright, we’ve turned it from a shack… into a residence,’ and that just completely ups the ante. That made the project a hell of a lot more serious.”

What CityMag has been shown is only stage one of the overall project, and five years in, it’s been a slightly protracted process full of idiosyncratic challenges.

As the project widens to incorporate more of the ruins, even more challenges are likely to present themselves, all of which Damien welcomes, just for the opportunity to work with, reflect against, and feed into history.

“A ruin in a semi-rural location, which has got some heritage value, doesn’t have a heap of legislative overlays on it, so there’s a degree of freedom with that, with the appropriate challenges and a trusting client is an ideal situation,” Damien says.

“Between myself, Irvin (Felkl, the project’s builder), and a very engaged, very trusting client, but also really well researched, and a great mason – between the four of us, it was four heads, and… it was a true collaborative project.”