In the face of a devastating pandemic, the tightknit local community of Goodwood found bright smiles, goodwill and helping hands amongst its band of neighbourly businesses along Goodwood Road.

The heart of inner-suburban Goodwood exists on a kilometre of bitumen along Goodwood Road, stretching from Parsons Street, just before The Goody, to the underpass.

A short trip out of the city, the pace of traffic slows around this hub of community hangouts and small businesses, all of whom are just now seeing a post-COVID return to normality.

On a Thursday afternoon, while CityMag is sat at an artfully constructed park bench out front of the Goodwood IGA. People pass from all directions, flitting between cafés, the bottle shop, bakeries, hairdressers, florists and the butcher.

Across the road, a school bell tolls above the low din of children playing at recess.

A calm serenity in the atoms of community colliding around us gives CityMag the impression that perhaps nothing at all changed in Goodwood over the last few months, but that’s not the case.

The pandemic washed over the precinct, leaving a discomforting quiet in its wake. 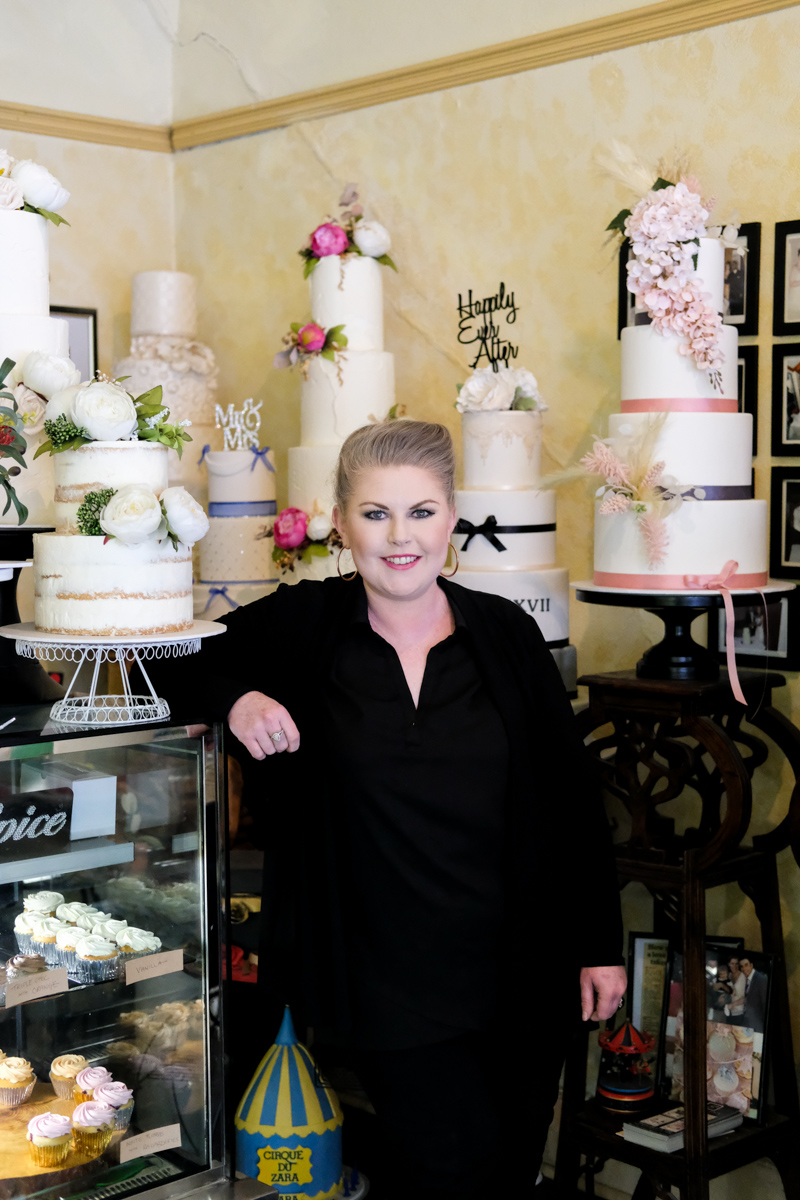 “I wish I’d filmed it. Some days – most days – it was eerie,” says Amanda Piper, who co-owns Sugar & Spice Cakes with her husband Heath.

The couple’s shopfront is located just before the Goodwood Road underpass, and they are used to setting up their store as the morning work rush streams by.

Cars then give way to pedestrians, as people wander up to the shops or take their dogs for a trip to Orphanage Park.

In mid-March, there was not a car or pedestrian to be seen.

Before COVID hit, Sugar & Spice Cakes was heading into its busiest first quarter in 21 years.

The business specialises in detailed and beautifully constructed wedding and event cakes, and the wedding industry tends to favour milestone years, like 2020.

This year, guest numbers at weddings were heavily restricted due to COVID-19, and interstate and international travel was put on indefinite hiatus.

Just as the traffic passing by Sugar & Spice had evaporated, so too had its bookings. Amanda’s phone rang endlessly with cancellation after cancellation.

“Funnily enough, we were the most organised we’d ever been,” Amanda says.

“I’ve got a room full of stuff. You almost have to laugh.”

But Amanda and Heath couldn’t bring themselves to close Sugar & Spice – they’re addicted to the business, Amanda says.

In the face of crisis, they acted quickly, and in Amanda and Heath’s response to the crippling of their business, they exhibited the two most fundamental characteristics of a Goodwood Road trader: community and creativity. 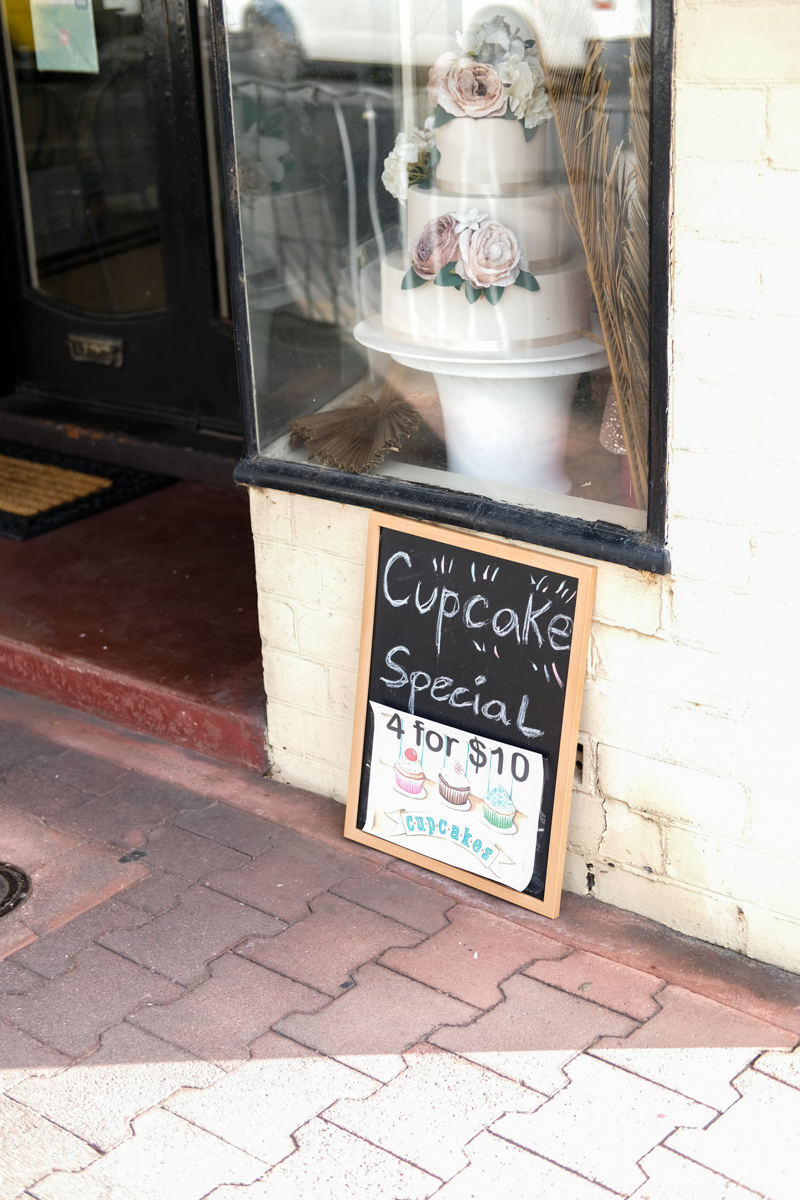 While much of Amanda and Heath’s work is intricate and ornate, their cake repertoire also includes impressive novelty pieces, like the KFC bucket cake in the shop’s window, made for their son Harrison’s birthday.

With Adelaide in the grips of a toilet paper shortage, Amanda started thinking of products that would capture attention and keep money flowing into the till.

“We did a toilet roll cupcake special and delivered them, because we’ve got a refrigerated van… We sold 2,000 in the first week,” she says.

“We sort of got a bit of a high and a rush from that, to keep us going. So each week we had different specials; Lego Masters started on the TV, so we did Lego cupcakes.”

At four cupcakes for $10, she found a stable enough audience to keep Sugar & Spice’s lights on the whole way through the pandemic – with the aid, of course, of JobKeeper.

With the 600 or so eggs she still had at hand, Amanda and her team also made an enormous batch of quiches, which she delivered to regular customers and friends, free of charge, as a morale booster.

“It really did make us think differently,” she says.

Goodwood Quality Meats also didn’t miss a day of trade, opening right through the pandemic and being one of the first businesses along the strip to implement social distancing.

The shop now has a marked-out spot to line up out the front, and only a few people will be permitted inside the store at a time. Owner Dave Armstrong plans to keep this in place for the foreseeable future.

Despite trading the whole through the pandemic, the butcher did experience COVID-induced hardship.

“Even though we were in some parts busier and other parts slower, we did reduce our staff,” Dave says.

But the social distancing has brought about what Dave sees as a silver lining amidst a pretty dark cloud. Not only does the practise provide a safe shopping experience for his many loyal customers, but it also allows his staff to provide a more personal service.

With bigger supermarkets seeing a rush on particular food items, Dave saw a lot of new faces turn to his business, hoping he might be able to help.

“A lot of those people who couldn’t find things at the supermarket because it had sold out, we found that a lot of them would come to us, and now we’ve kept them as clientele,” Dave says.

“People are really appreciative of what you can do for them. Because you couldn’t get rice – we had rice and pastas and stuff. People just saw what small businesses had to offer that they didn’t realise.” 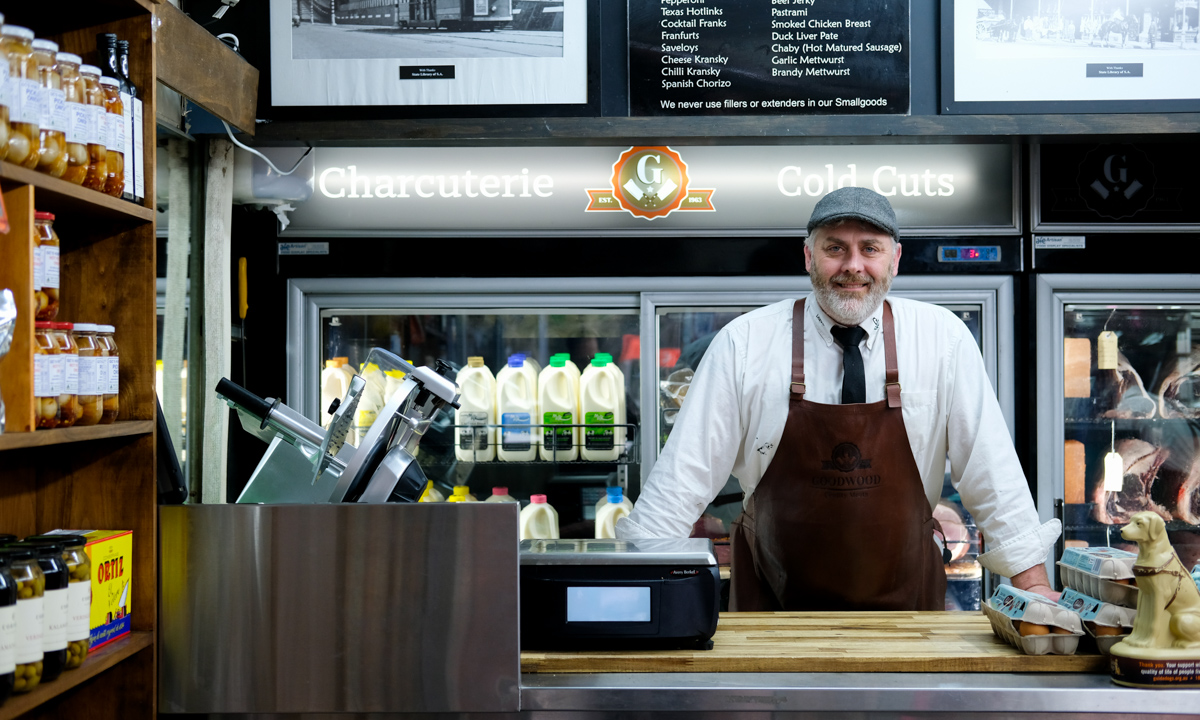 This is not to say Dave left the future of his business up to the chance of being found – he and his staff worked quickly to introduce new methods of online ordering, through social media and his business’ website.

And he also reached out to local churches, so as to maintain ties with the Goodwood community’s older members, who may not have felt comfortable visiting the shop in person and for whom online ordering was not a likely option.

From this central hub, through the actions of business owners like David, the heartbeat of the Goodwood community kept its rhythm.

But what is a community without its pub?

For the last 12 years, Fran and Matt Rogers have run the Goodwood Hotel, known amongst friends as The Goody.

It has been the long-term aim for the couple to create a sense of the old-school style of pub, one “where you know who your punters are, you remember their names, you know what they drink,” Fran says.

This was the initial draw to the hotel and its surrounding community.

“We felt we were actually able to do that here,” Fran says.

“The whole feel of the street was very much small town. We sensed that. We really, really felt that. We’re five Ks from the city, but we’re a little community, and our value base has always been about community and family.”

Late in March – the 23rd, Fran says, “a date we will never, ever forget” – the pub was forced to close, and spent the next 100 days trading only through its bottle shop and later a small takeaway food menu.

Not only was the pandemic a moment of great uncertainty, but for business owners like Fran, the lack of autonomy she experienced in running her business was deeply unsettling.

“You actually take control away from business owners when you shut things down. That’s freaky, to be told what to do with your business,” she says.

Last Monday, the pub reopened, and, though still not yet at full capacity, and with a lot of lost time to make up.

“We’ve got to work bloody hard to make up the revenue that we’ve lost. I think everyone’s going to be a little bit anxious. We’ve deferred bank debt, and hopefully people have come to good rent arrangements and all of that sort of stuff, but we’ve got this backlog of debt, and that’s stressful.”

We detect a note of optimism in Fran’s voice, in spite of this stress, and this comes form finally being able to engage once again with the community she and Matt have built around the pub.

“We’re feeling a lot more human, to be perfectly honest, because we’ve got customers. That’s what we do, we offer hospitality, we meet and greet, and we look after people,” she says. 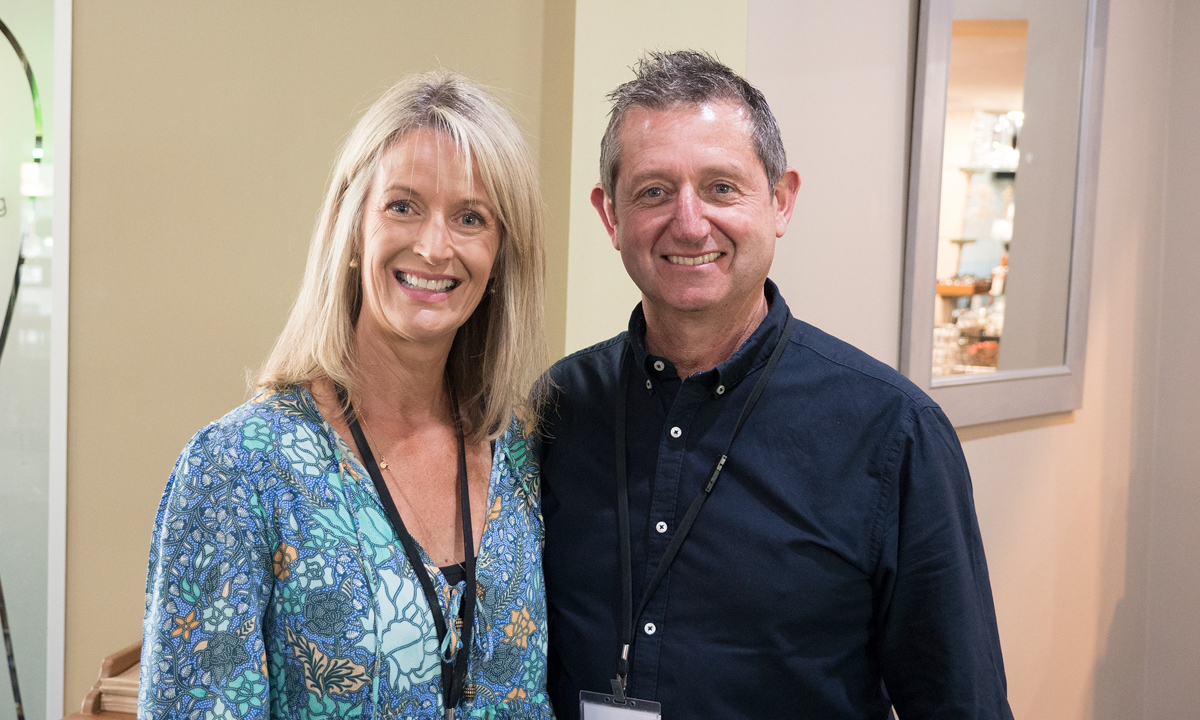 On Friday afternoon, The Goody was the lunch location of choice for Rob Jordan, general manager of the Capri Theatre, which is situated at the opposite end of the kilometre strip.

The outing was an opportunity to thank the maintenance volunteers who had worked tirelessly throughout the pandemic to fix many of the niggling issues that come from keeping an almost 80-year-old venue in perfect working order.

Like the Goodwood Hotel, the Capri was forced to close by government mandate, which came somewhat as a relief to Rob, who was contending with a clientele who were choosing isolation over attending movie theatres, and a film industry no longer delivering new content to cinemas.

All went quiet inside the venue for some time, but Rob decided to use the theatre’s marquee corner as a beacon of goodwill, putting up movie quotes and messages of positivity for all who pass by to take with them into their day.

As restrictions eased, Rob opened the theatre up to personal hire – some groups came in to big-screen sessions of Mario Kart and karaoke nights. In fact, all 46 sessions were booked out within 24 hours of the concept being announced.

The Capri will continue to run big-screen gaming sessions in the mornings, but as of this weekend, the theatre has now returning to its primary function as a cinema, running a number of family favourite films for $10 a ticket.

“I’m not sure how busy we’re going to be, but at least it gives people an opportunity to get out, if they want to,” Rob says.

“So it’s more putting it on for the community. I’m not expecting that we’ll have hordes of people come through.”

The theatre’s capacity is currently at 349 people, and Rob says they’ll start seeing new titles return to the cinema in a couple of weeks, after the school holidays, which will then signify almost being back to a normal level of trade.

“And then we can start to feed people back into the businesses in the evening… start pushing customers back in their direction again,” he says. 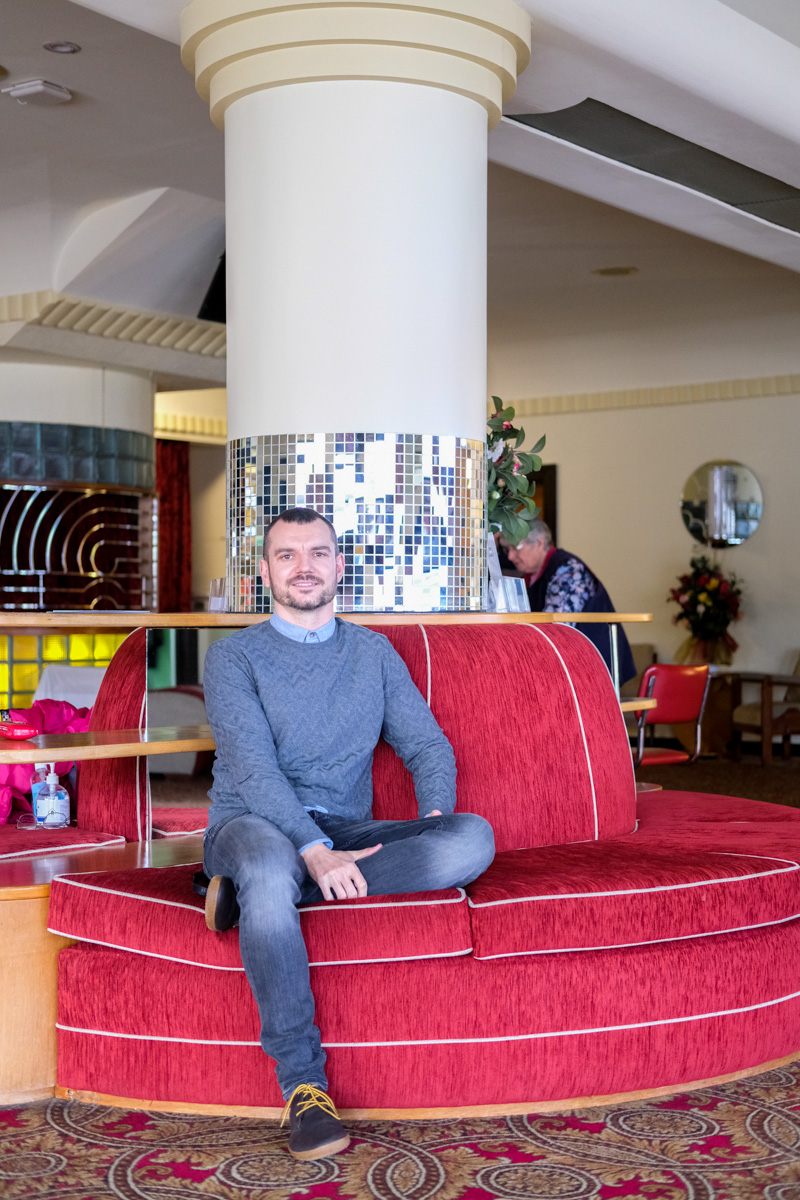 For Goodwood locals, the secret to the community’s strength is in its self-sufficient nature.

Just as Fran saw 12 years ago, there is a deep connectedness in the people and traders of Goodwood, and every kind of business you could need to survive a pandemic exists here, and all are willing to help whoever and however they can.

For visitors coming into this wholesome bubble, the feeling of tightknit community is a warm embrace, a throwback to better times of smaller businesses and stronger connections – when the heart of a suburb could be felt.

From where CityMag stands, this is the heart of Goodwood.

“Overwhelmingly, we’re seeing people who are so grateful. They’re happy to be back,” Fran says from the Goody’s front bar.

“Some of them are just happy to come and have a beer or a schnitty… But for other people, it is more about the connection, it’s about being part of something bigger. Being recognised and belonging and having someone to talk to. And that’s a common feeling along what we like to call the ‘Heart of Goodwood’.