What to wear: Adelaide Fringe vs Adelaide Festival

A battle of low versus high fashion, for the benefit of your festival season attire. 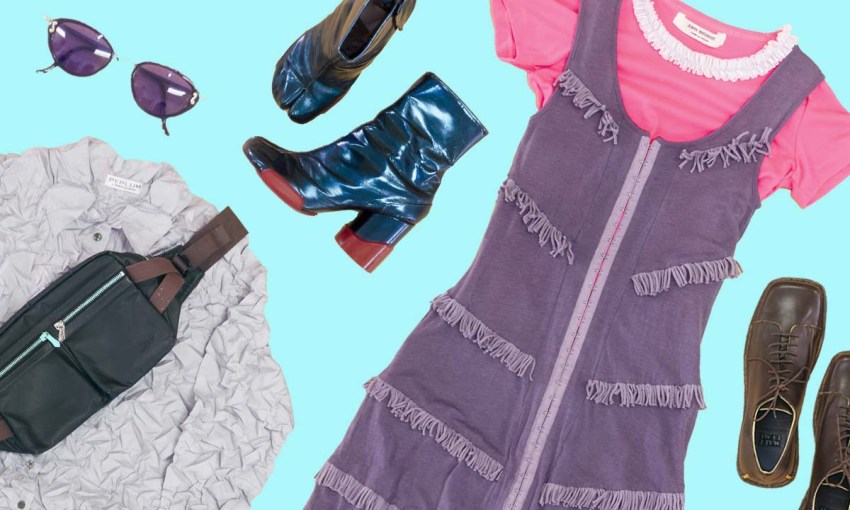 For in-person fashion chat and the best second-hand designer clothing in the city, visit A Flat Shop at 2/25 Gresham Street.

When the Adelaide Festival would start at the beginning of March every year, Angela would serve customers styled in round, tortoise shell sunglasses and asymmetrical, drapey dresses.

The Adelaide Fringe crowds, on the other hand, were not Angela’s clientele. An endless parade of fascinatingly dressed Fringe-goers would rush past the shop “like this big stream of fish” to the Garden, she tells us.

There is a difference in dress code for the city’s two flagship festivals: one spontaneous, one thoughtful.

To help you look your festival-best, A Flat Shop has skilfully outlined an outfit for each scenario. 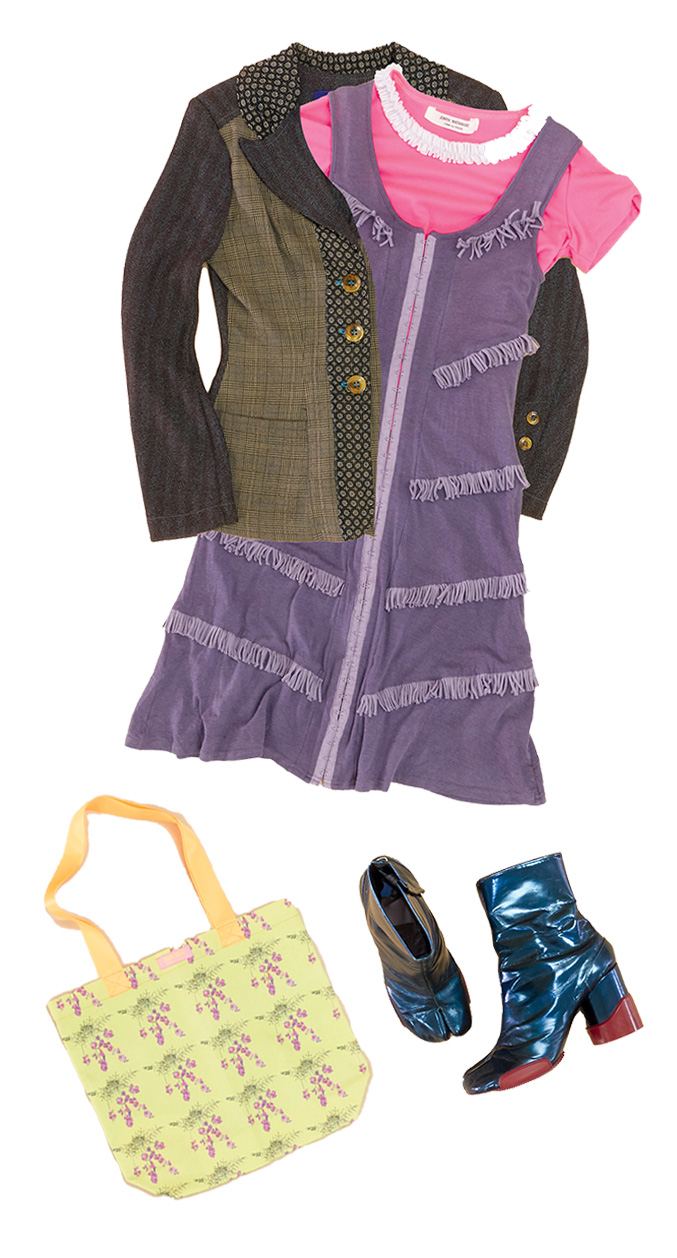 How would you describe the dress of an average Fringe attendee?

Nathan: I find it cool that around that time of year you see a lot of weird styles you wouldn’t normally see, such as a Victorian-era coat and top hat. It’s a bit of a shame it’s not like that all the time.
Christopher: There’s a lot of costume.
Nathan: It crosses over into what the non-performers are wearing as well. You get a bit of that bleed.
Angela: A lot of things are coming out the woodworks. Anything goes.

Tell me about the Fringe outfit you’ve put together.

Nathan: We went for a very literal ‘fringe’ for this dress. That was the starting point.
Angela: The dress is made of 66 per cent polyamide and 34 per cent cotton – so you’ve got a bit of natural fiber to help get you through those hot summer nights.

And the t-shirt and the bag?

Christopher: I think we were just really drawn to the colour combination between the shirt and dress. They’re clashing, but almost in the same gamut. There’s the fringing at the top.
Angela: The tote is from a small collection called Dunjiba, made by Indigenous artists. I think a bag is necessary when you’re manoeuvring around.

What about the blazer and the shoes?

Christopher: The blazer is patchwork by a brand called WooXoom – I think it’s French. The patchwork has a slightly haphazard, make-do, ramshackle attitude that ties into what the Fringe is all about. It has a carnivalesque feel to me.
Angela: The shoes are Maison Margiela Tabis. Could be worn while side-stepping crowds.
Christopher: If it gets muddy in the garden, it’s gum boot-y too. 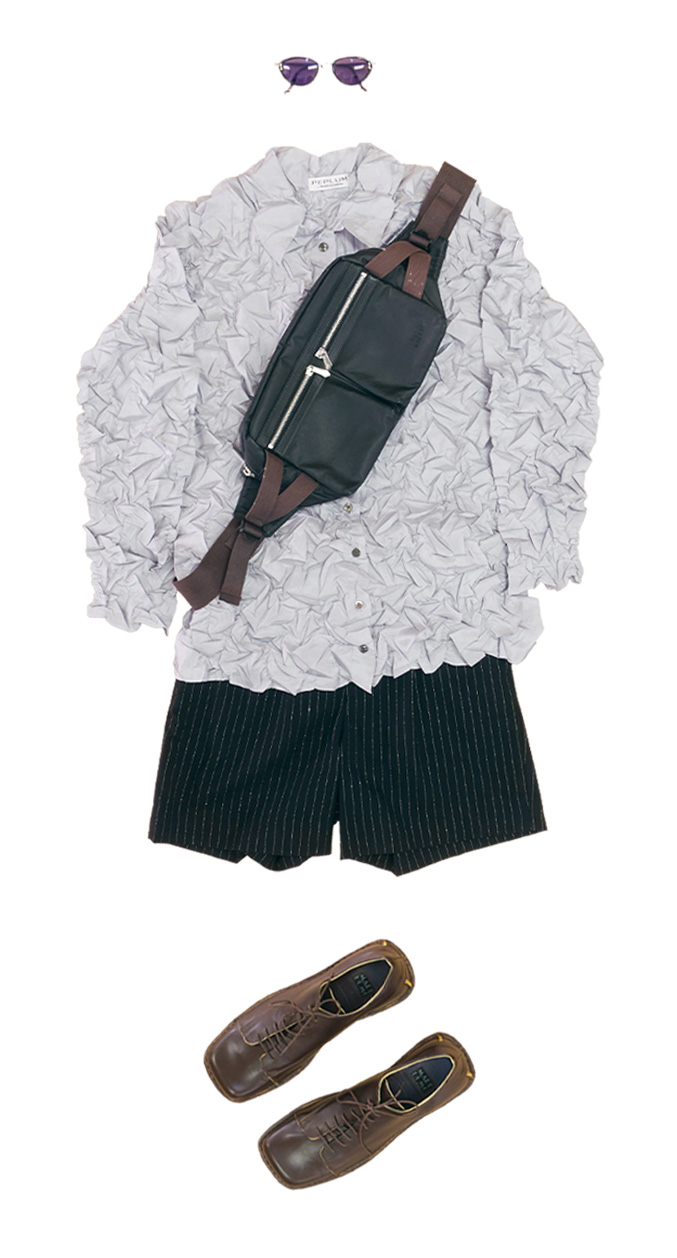 Let’s move onto the Adelaide Festival. What do you think of that style?

Angela: There’s an air of sophistication. People are wearing platform shoes or high-waisted tailored pants or shirts. There’s always interesting eyewear, too.
Christopher: Although we’ve styled these very two specific outfits, they could be worn the other way. Maybe you’re a big fan of the Fringe, and you know you’re going to a Festival show, so you wear a dress with fringes or whatever to say, ‘I am pro-Fringe.’ I think that can be a lot of fun – dressing inappropriately for situations. If you want to standout, do the opposite.

Tell me about this Adelaide Festival look.

Christopher: The shirt is silver polyester, and it’s kind of long-sleeved and bouncy.
Nathan: You’ve got a collar, which has a bit of formality to it.
Angela: Whilst also being a little unexpected.
Christopher: The shorts are tailored, single-pleated and light wool. Short but not short-short.

Christopher: It’s Jean Paul Gaultier, has a couple of pockets on the front. You can also expand it to fit a couple of festival programs and something else inside. Maybe you see something at the Dunstan Playhouse, the Festival Centre, and the Space Theatre. Maybe you go to the cafés in between but you don’t quite have enough time to eat so you get a little doggy bag. Fits three programs and a half-serve of chippies.

Christopher: The Derby shoe is square-heeled.
Angela: It’s hip to be square.
Christopher: We chose them because they’re semi-formal, but also kind of interesting-looking too. It fits within the conventions of what might be expected if you went to an evening or matinée show or whatever. But also a little bit weird.