Fly in fly out

A new high-rise development in Botanic Park is only accessible by air, and its residents have attracted the interest of scientists who want to know the secrets of their success.

The grey-headed flying fox colony in the Aleppo Pines on Frome Road is thriving.

This became abundantly clear to CityMag earlier in the year while attending WOMADelaide, where every rest note or song-break at the Zoo Stage was punctuated by vociferous noise complaints from the local residents – perched high on their branches above the stage.

“Bats play a very important role in the landscape, in eating insects – but also the flying foxes do pollinate as well.”  — Dr Wayne Boardman

“Our last count had the population close to 4,000,” says wildlife veterinarian Dr Wayne Boardman of The University of Adelaide.

“But subsequent to that count, in the last two to three weeks there’s thought to have been an influx of another 500.”

The colony is believed to have established itself in South Australia and Adelaide after coming in from Victoria and even New South Wales, with these latest arrivals also journeying from interstate.

“The bats must be thinking there’s a good opportunity there. It’s a nice lifestyle, the housing’s cheaper than the eastern states, the cost of living’s cheaper, the food’s probably a bit better – I’m not sure,” says Wayne with a wry smile.

Terry Reardon from the South Australian Museum is a fully-fledged bat expert, and has been following the grey-headed flying fox troop since the early pioneers showed up in 2009. 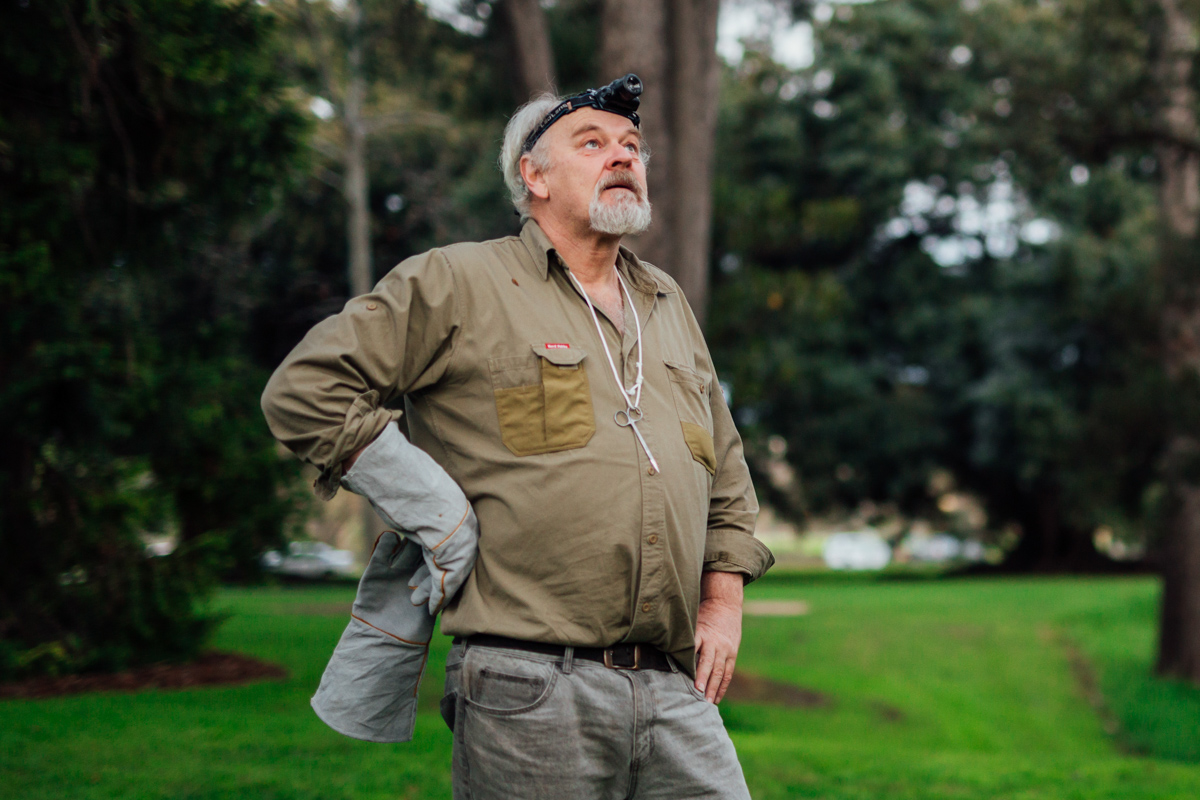 He says their current camp is ideal for the species.

“Flying foxes like to position themselves near coastal regions and near rivers in a place where they feel safe – so this position here on Frome Road, next to the Torrens is pretty much perfect for them,” he says.

CityMag is catching up with Adelaide’s Batmen at 5:30am, in pitch-black in Botanic Park.

The University of Adelaide is leading research into the colony of flying foxes and have set up a pulley system to raise long nets, each about 30 metres in diameter, high into the canopy above to catch bats as they return from feeding at sunrise.

The scene is incredible. As we enter from Frome Road, bright white lights bob about through the trees, blinking as they become momentarily obscured behind the trunks of the Aleppo Pines. The lights are attached to heads of between 20 and 30 keen researchers, students and volunteers busily preparing for the bats to return to the trees.

“We’re hoping to catch around 50 flying foxes over the next three days,” says Wayne after introducing himself in the darkness. 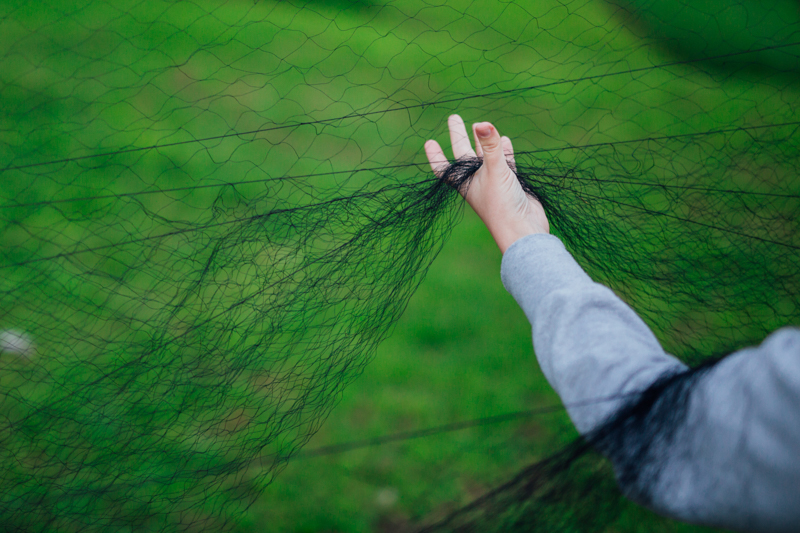 There’s a buzz on the ground and babble above. Although the flying foxes’ wings make no audible sound as they move through the air, their mouths more than make up for this.

Fat and happy after a night foraging in the hills, these native mammals make a raucous noise high in the treetops above as they settle in for sunrise and sleep. 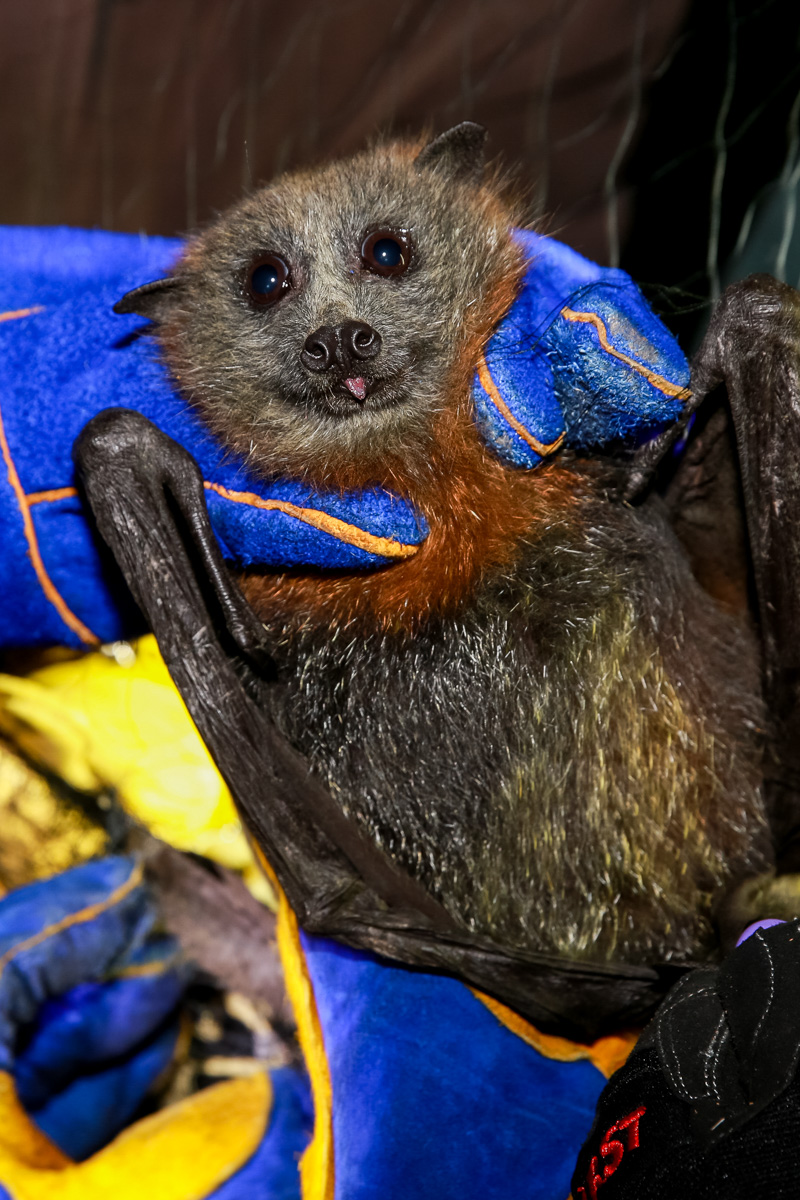 Looking plump after a night of foraging… in Basket Range, no doubt

But there is a latent threat of disease with the bats – which is part of the reason we’re all up so early.

“We’re collecting a sample size of the species to understand better the health of the colony, the prevalence of any viruses, and start to complete our picture of the flying foxes as there are still many unknowns,” says Wayne.

Wayne is testing for the Hendra virus and Australian Bat Lyssavirus, which if spread to larger mammals can pose a risk to humans.

The research has also included a collaboration with the University of Georgia in the United States, which saw GPS tracking collars applied to the bats for further insight into their behavior.

“Bats play a very important role in the landscape, in eating insects – but also the flying foxes do pollinate as well, disperse seeds and are generally very important in maintaining the ecological landscape,” says Wayne.

“I particularly love the flying foxes. I think they’re a great addition to the faunal landscape of South Australia but they are new. Some people think of them as being introduced, I think they are a natural ingress of a species and that it’s a natural trans-location we’re seeing here.”

Suddenly a volunteer hollers. They’ve got a bat in the nets.

Wayne is quickly on the scene with heavy gloves and headlamp. It takes several people to hold the bat still so it doesn’t get more tangled in the nets.

Up close, the animal is incredible – like something from Jim Henson’s imagination, but more wonderful because it’s alive and it lives in the centre of South Australia’s capital city. 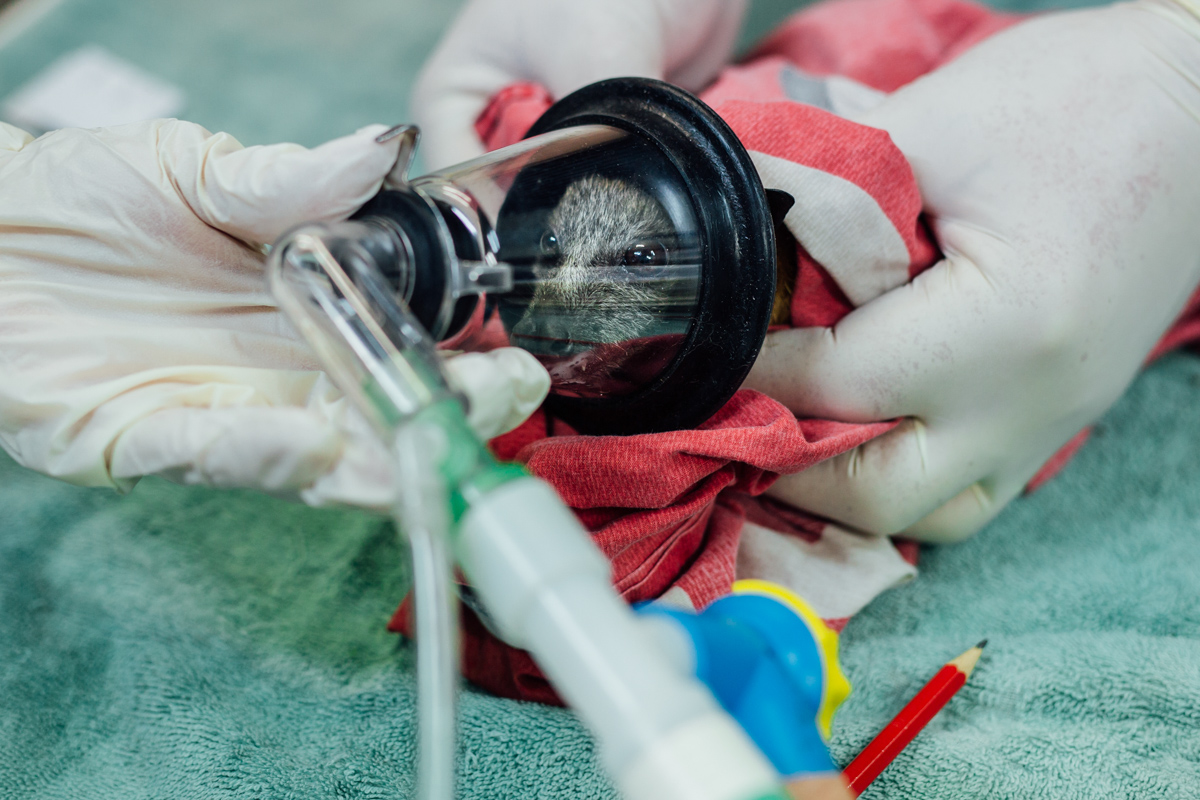 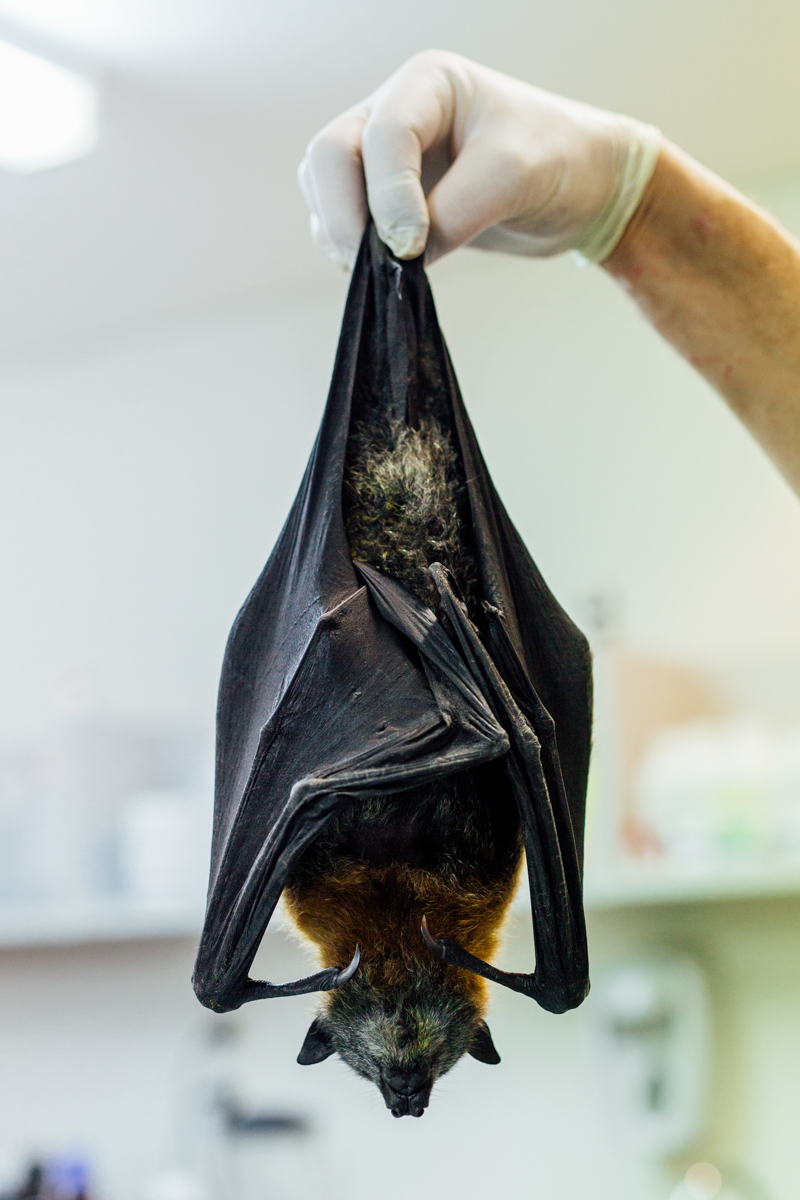 Inside the Adelaide Zoo facility, researchers handle the captured bats with extreme delicacy, only pausing quickly for CityMag’s lens