Uraidla Brewery has made a perfect breakfast beer

Future Light is a low-alcohol pale ale with a huge fruity flavour profile, made for beer fans keeping an eye on their alcohol intake.

As contemporary society collectively overcomes the novelty of boozy Zoom catchups with friends, home-delivered alcohol, and being locked up at home for most of the week, some minds will inevitably start to reconsider just how much alcohol we’ve come to consider a ‘normal intake.’

This was an emerging trend even in pre-corona times. New Age wine producers introduced the concept of 10-12% ABV wines as standard – all but ending the multi-generational reign of the epic South Australian shiraz, at least for some.

This is a movement that Uraidla Brewery’s Oscar Matthews has watched closely.

“I think there’s a big shift towards lower-ABV beers, and sessionability particularly as well at the moment,” he says.

“In the last six months it’s started to ramp up, and then I guess most recently as people have started to shut down a little bit.

“So, I think there’s that mindset shift of people wanting to look after their health as well.”

Uraidla Brewery’s range to date has included several mid-range beers – both largers and pales – with many reaching up into the higher-ABV range.

“We’ve treated it like we would many of our other pale ales; we’ve used a lot of wheat malt and oats in there. They contribute to the colour and body of the beer, so we’ve really focussed on them,” Oscar says.

“And then, as far as yeast goes, we’ve played with an East Coast pale yeast that we’ve used before in some of our big, hazy, juicier IPAs, to see how that plays out on a smaller beer.”

Future Light is 2.9% ABV, which sits lower even than a session ale in terms of style. It is bright and fruity, both aromatically and on the palate, with a tonne of tropical flavours coming from the hop profile – a mix of Blanc, Cascade, Loral and Sabro.

There is at first a silky mouthfeel, before the beer opens up to become a truly effervescent experience, crackling like sparkling water on your tongue. Notes of pineapple and kiwifruit linger long after each sip.

If ever there was a beer equivalent of drinking a glass of sparkling pineapple juice during a buffet breakfast while on a tropical holiday – this is it. 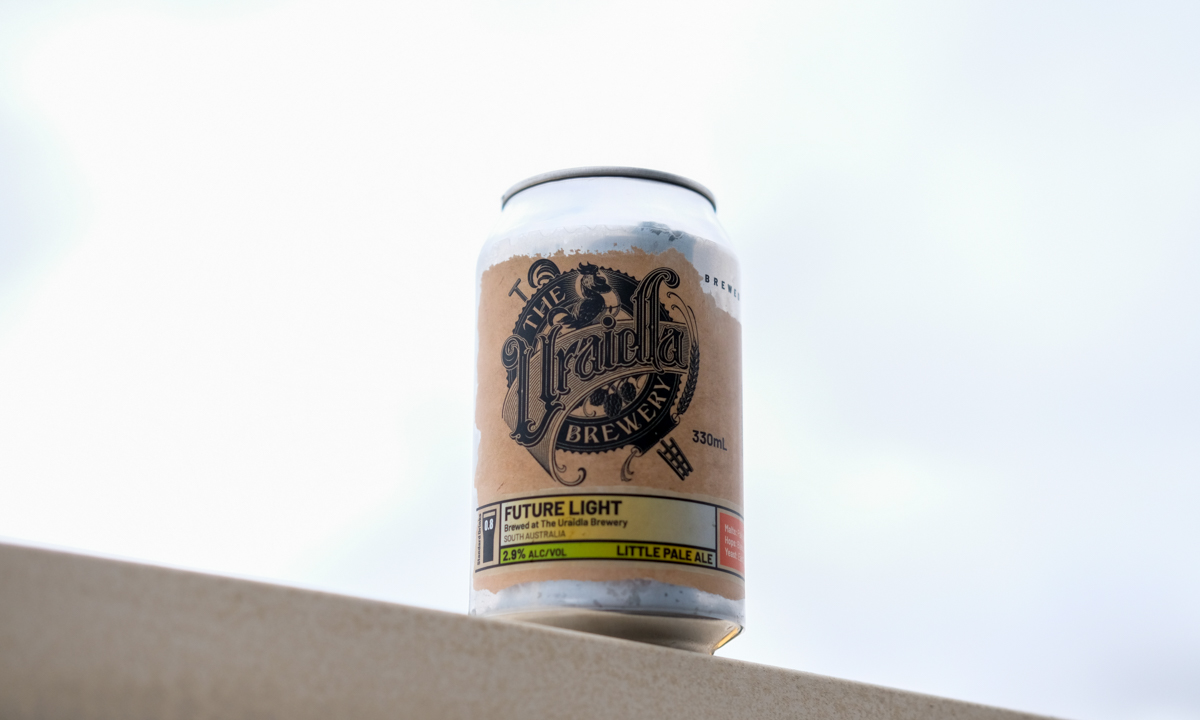 Future Light will not be the last low-alcohol release from Uraidla. Oscar says he plans to release ‘little’ versions of other styles for each season.

“I’m hoping that we might be able to start producing something like a light-ABV stout as well, for the cooler months, too,” he says.

“Because I think, again, seasonality is a big thing, and again, most of the stouts out there, they’re quite high in ABV to begin with, so there’s not really much in the way of small stouts.

“It’ll transition as well; as the weather does eventually start to warm up again, in six months’ time or so, we’ll start to look at lagers and that sort of thing as well.”

Creating a low-ABV stout is not only beneficial for a marketplace of conscientious drinkers – it’s also a technical challenge Oscar is keen to dig into.

“They’re quite hard to brew technically, because stouts generally need the body and mouthfeel there, which is enhanced by alcohol, so that’s going to be quite a technical beer to produce,” Oscar says.

In the meantime, grab a sixer of Future Light from the Uraidla Republic Café, online via Uraidla Brewery’s webstore, or wherever good beer is sold.