When the Tour Down Under rolls into town in January 2020, so too will this hoppy lager from Uraidla Brewery and Bridge Road Brewers. 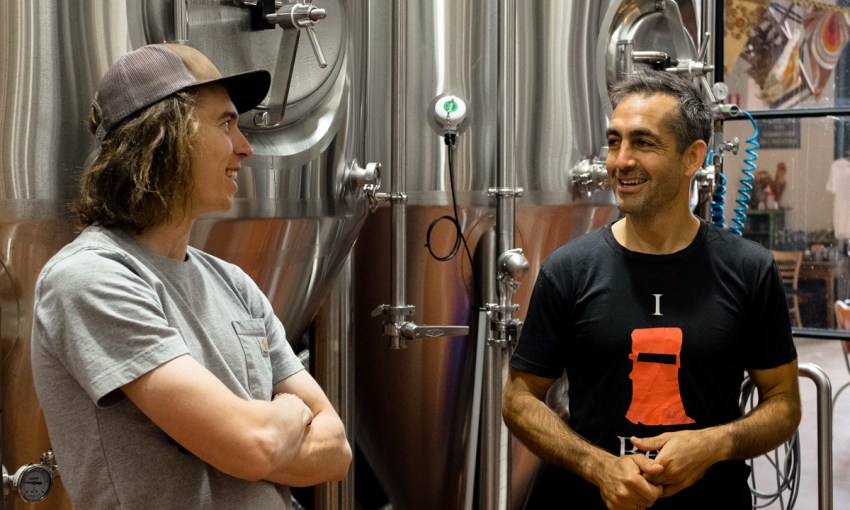 Oscar Matthews, head brewer at Uraidla Brewery, once shared with us an anecdotal observation about the hordes of cyclists who’d descend upon the pub for the Tour Down Under that seemed, to us, antithetical to cycling culture.

Contrary to our admittedly superficial knowledge of the Lycra-laden set, according to Oscar, cyclists bloody love a beer.

The Uraidla Brewery and Bridge Road Brewers collab hoppy lager, Brewer Down Under, will launch this January in time for Tour Down Under.

Stay tuned for information on Tour Down Under events from Uraidla Brewery and Bridge Road Brewers.

Throughout the Tour, by mid-morning, the brewer recalls, the pedallers who’d ascended the bowing and winding Greenhill Road had already downed their espresso and were straight onto their first beer for the day.

This is no great surprise to Ben Kraus, founder and head brewer of Victoria-based Bridge Road Brewers, who has cycled up to Uraidla from the Adelaide CBD to chat with us about he and Oscar’s upcoming collab beer, Brewer Down Under.

“Cycling was definitely coffee culture, and it was based on Italian cycling and having an espresso on the ride and after the ride, and it was probably led by people who were really watching their health and fitness,” Ben says.

For Ben, who’s an avid mountain biker as well as road cyclist, a day riding mountain bike trails “sort of isn’t complete without a beer, in a weird way.” 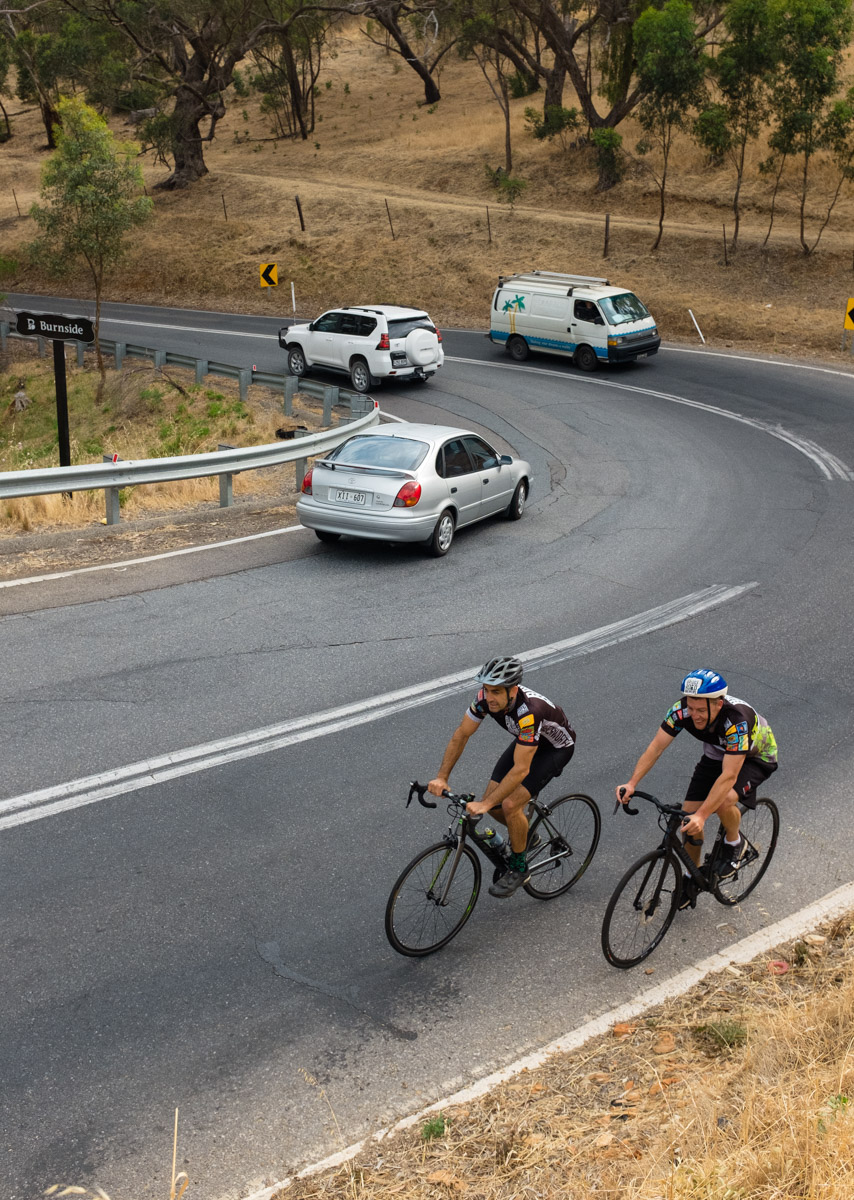 Bridge Road Brewers and Uraidla Brewery have long shared a mutual respect, and the connection is solidified through Bridge Road’s SA rep, Dave Lawson, who has a history working alongside Oscar at Stirling Cellars, SLO Brew in the US, and at Pirate Life.

Brewer Down Under, which will be a lager, is the first collaboration Uraidla Brewery has been a part of. With Uraidla being less than two years old and Bridge Road having spent 15 years in the game, both parties are keen to learn from each other’s perspective.

“Oscar’s a lot younger, and he’s got a more modern take on craft beer, which is really nice to be involved with and see what else is happening,” Ben says.

“Because we’ve been around 15 years, we’ve done a lot of different styles, but we’ve got some beers that would be considered more ‘classic craft,’ if that’s a thing, even though craft beer’s pretty young.

“Oscar’s got a reputation for making really good hop-driven beers with low bitterness, so that’s definitely the new space.”

The beer will be a “hoppy lager,” Ben says, a style sometimes also referred to as ‘new world lager’ or ‘India pale lager.’ 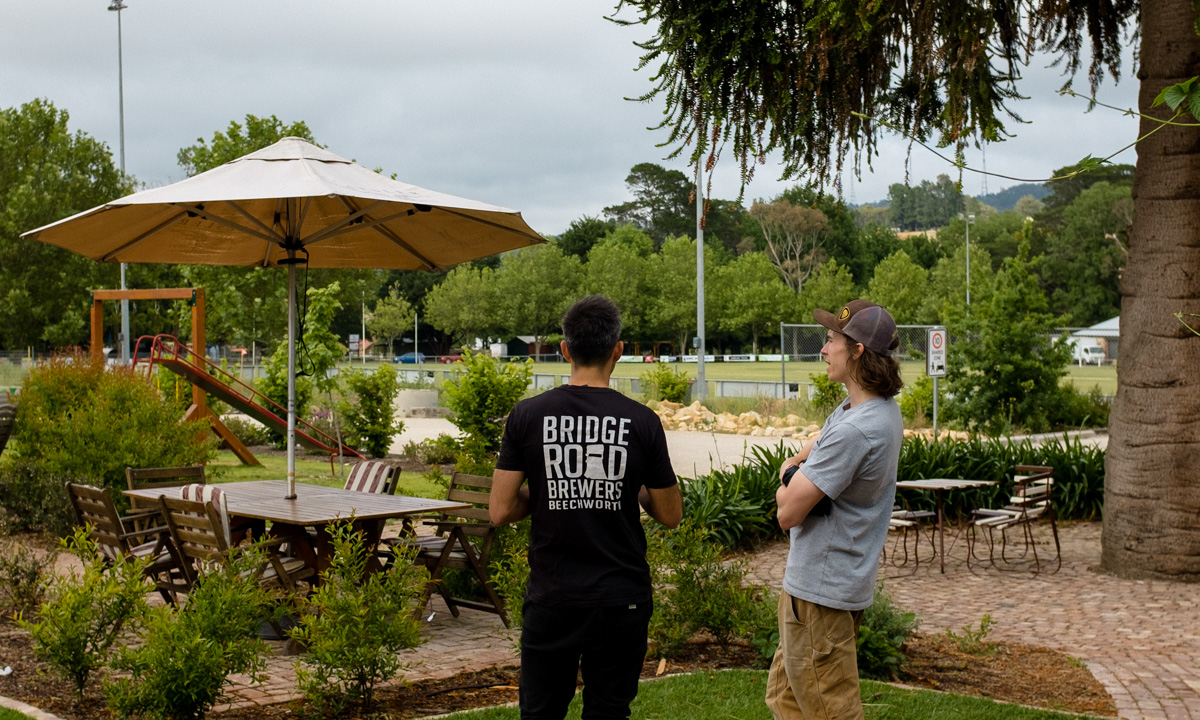 Ben and Oscar and Uraidla turning it on

Ben brought some hops over the border to use in the recipe, Vic Secret and a newly commercially available experimental variety from Hop Product Australia called 016, which Bridge Road has long used in its annually released Dark Harvest harvest ale.

“We actually are lucky enough to have access to the breeding program at the [Hop Products Australia] hop garden, and we’ve been making beer using fresh hops direct from the garden, from their research varieties, for a long time,” Ben says.

“The flavour profile we see when it’s a really good hop is, it’s sweet orange and mandarin, orange peel. It’s not orange, but it’s in the realm of those flavours. In saying that, we’ve seen variation from year to year, but when it’s where it should be, we definitely get that sweet orange peel.

“And Vic Secret’s got that tropical note… In the brewery in Beechworth we use Vic Secret quite a bit, not as a main hop but as a hop that helps lift the flavour of the other hops, it’s got quite a nice favour, but it’s sort of a booster, so it’s a really nice hop.”

As we’ve reported previously, Uraidla Brewery’s lagers have recently been made using an in-house malt Oscar has sourced via Longtrail Farms in Parilla, which is malted to spec by Voyager in Victoria.

This malt also forms the basis for Brewer Down Under, with some flaked wheat also used for added weight and mouthfeel.

“We’ve been using that Longtrail Farms malt for a few batches now, and it’s just really clean. So Planet’s a European [barley] variety, it’s got some nice biscuity, nutty characteristic there,” Oscar says.

“[Brewer Down Under]’s a pretty hop-dominant beer, so that malt profile will be covered up quite a bit, but hopefully still present enough.” 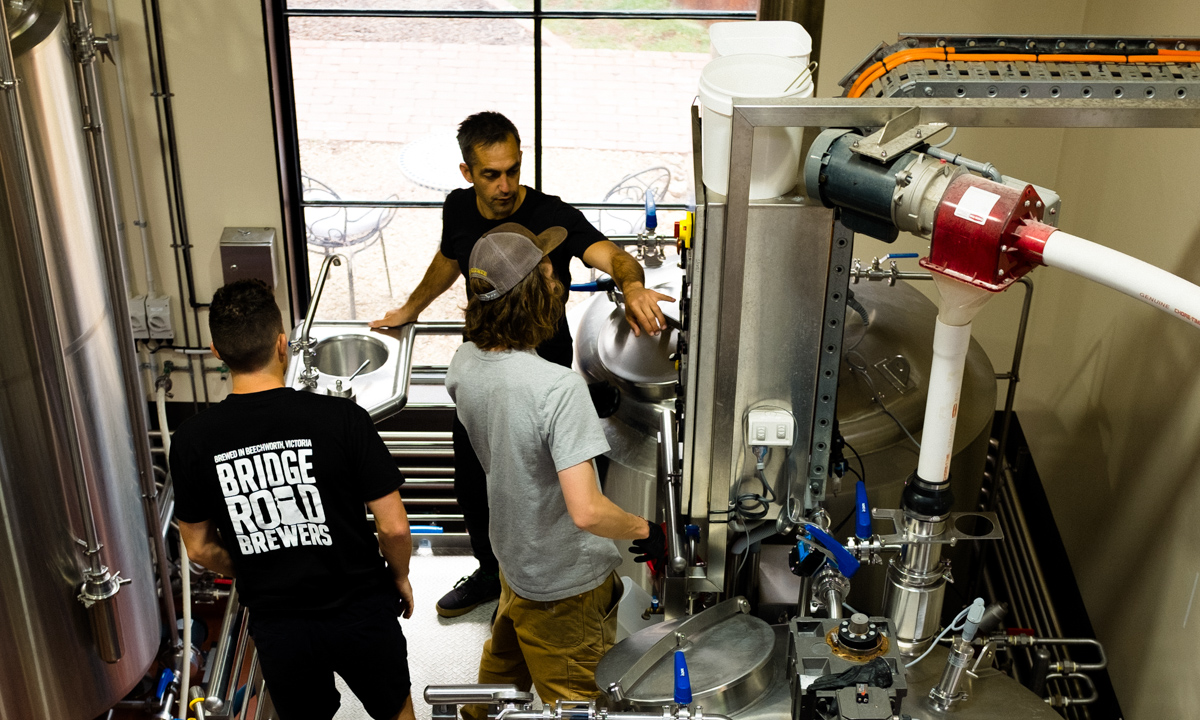 The Tour Down Under’s PR team has reached out and asked us to stress that Brewer Down Under is not an official, or in anyway sanctioned, TDU collaboration.

Given Brewer Down Under is set to launch at the pub in summer, around the time when Tour Down Under will roll through Uraidla (16-26 January 2020), the ABV has been kept low at 4.2 per cent.

The beer will also be available at Bridge Road Brewers’ pop up at Queen’s Theatre, in collaboration with cycling brand Rapha, along with a couple of other BRB beers, three wines, and a gin on pour.

Dave has also organised for the beer to be available at select venues along the Tour Down Under route.

If the 2020 TDU gets hit with the same extreme heat as in previous years, Uraidla’s marginally cooler Hills locale is likely to be the best spot for a drink and a gander at the race.

For updates on the beer’s release, stay tuned to Uraidla Brewery and Bridge Road Brewers’ socials pages, and also keep an eye out for further information on the Bridge Road x Rapha pop up. Word on the street is there’ll be another (pink) collab beer appearing throughout the event.

Please note: The makers of Brewer Down Under are not an official sponsor of the Tour Down Under.