The new head chef at The Unley Hotel is working his arse off to make sure Adelaide knows it can expect more than steak and schnitzel from a pub in 2020.

At just 24 years old, The Unley pub’s head chef Adam Dennis understands he’s got a weighty job. Head chefs not only direct the menu, but they have to manage profit margins on meals, manage his team’s emotional wellbeing (there’re knives in the kitchen after all), and cook what the punters want.

This last point is where Adam has set his sights.

The Unley
27 Unley Road, Parkside (just over Greenhill Road, south of the city)

“I always want to lean towards my experiences in Japan, Asia and Europe but it’s about making it work in a pub environment,” says Adam.

Tall and well groomed, Adam is missing the sweat sheen and pallid skin of pub chefs we’ve met before and worked alongside in our prior life as bartenders and baristas. Adam looks healthy and his eyes are clear when, in the quiet of an afternoon at The Unley Hotel (née Boho, née-née The Unley on Clyde), he recounts his short history in hospitality.

The story starts in Whyalla, where he took a job with a catering company and the owner showed him that food could be “different and better,” he says.

This job lit a fire under the young man who then started an apprenticeship in the country town that he would end up finishing in the capital city, under head chef of The Mile End Hotel, David White.

Adam has taken periods off and stepped away from the kitchen, travelling through Europe and Japan, but he’s always returned to the kitchen and to Saturno Group of pubs in particular.

“I do really get a sense of loyalty from the Saturno business,” says Adam, “they support you and they understand what you need, what you’re going through.”

They also know good chefs need room and opportunity to flex their creativity in the kitchen. And so, under Adam, the kitchen at The Unley has set a course towards elevating the standard pub meal.

Using the specials board, Adam and his team like to nudge people up a notch.

“It’s a great way for me to test those kinds of dishes I tried while travelling,” says Adam. “And when a special sells out, it gives me more happiness… I guess. Satisfaction!

“It gives me a greater sense of satisfaction whenever I’ve been able to take one of those dishes I’ve liked when overseas and introduce it into the pub environment and have people enjoy it – especially when they might just be coming here for a steak or schnitzel.” 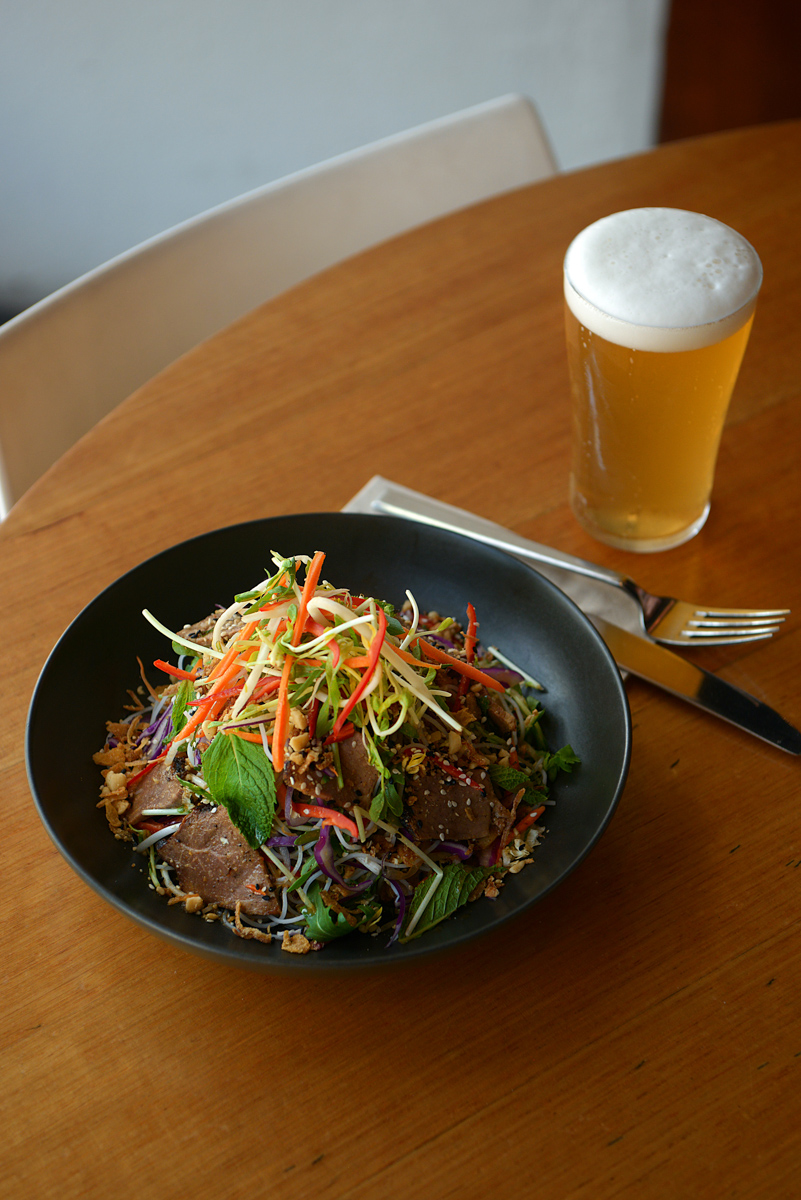 Pictured is the Thai Beef salad, which today is a total pub menu classic. Adam’s twist on the dish, however, is a more purely Thai take on the meal with brighter flavours, the spark of chilli and authentic nam jim sauce.

“When I first got here I put a ramen on the specials menu,” says Adam, recounting a less successful attempt to mainstream a meal.

“I love ramen and I wanted to give myself a go making one for the menu. I think on Gouger Street they sell a ramen for $14 to $18, maybe $20 if you get a lot of add-ons. Mine had all the add-ons and I was selling it at $18 but it was difficult to move.”

Meanwhile Adam’s old boss at The Mile End saw the dish on The Unley’s menu and so chucked one on his specials board at $26.

“We’re quite competitive,” says Adam. “He says the ramen was just walking out the door.”

Every pub has a local reality. And while new to the area and early on in his career – Adam is dedicated to discovering the sweet spot for The Unley clientele.

“Ultimately I want to make better food for the people who want to eat it,” he says.