On Monday, 2 November, Adelaide's 'highest restaurant', Koomo, will launch with a Modern Japanese menu and incredible views from the Hills to the Adelaide Oval. 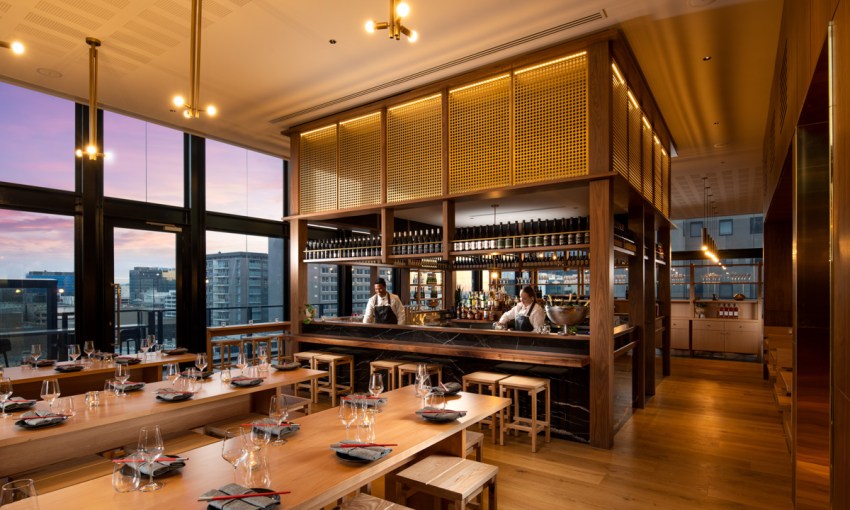 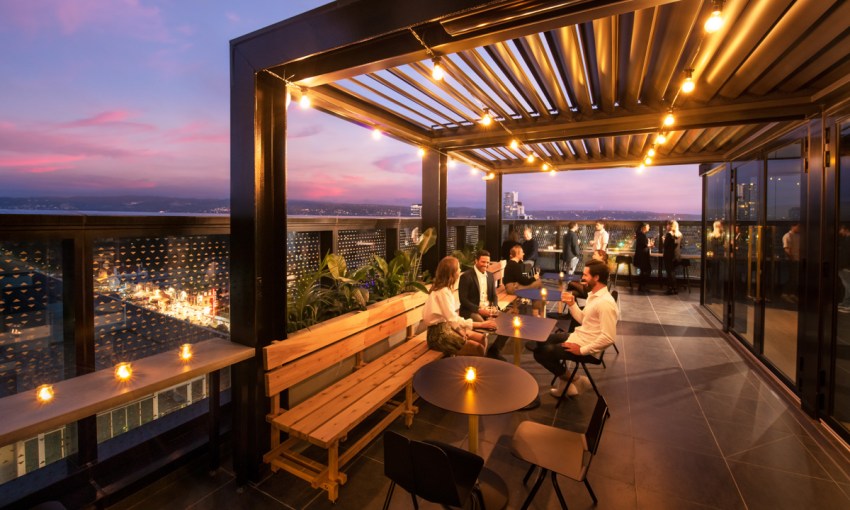 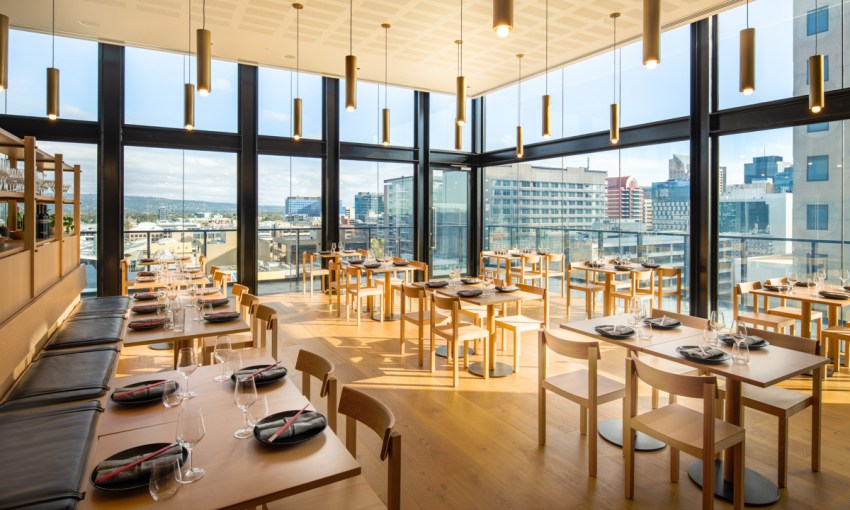 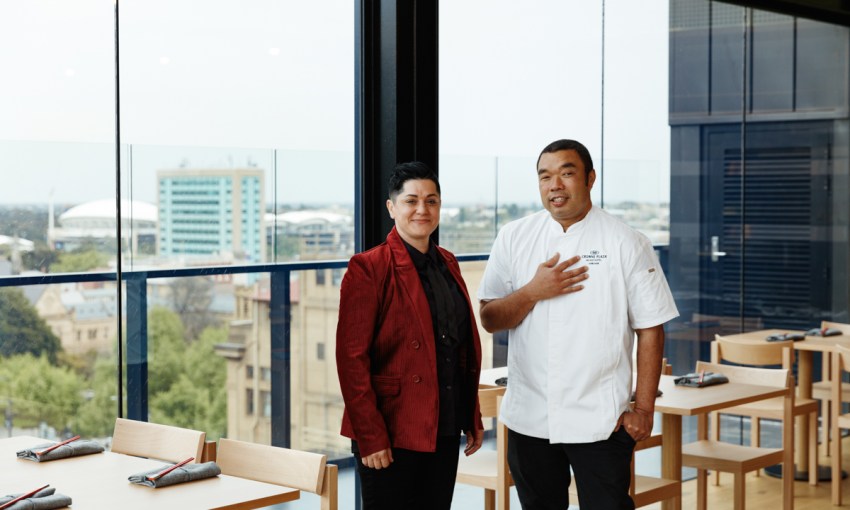 On the 10th floor of Frome Central Tower One (aka the new Crowne Plaza Adelaide and Adelaidean Apartments) sits what’s being touted as the highest restaurant in Adelaide – Koomo.

Coming out of the hotel’s elevators, guests will find themselves in the Plaza Workspace – Crowne Plaza’s new take on the hotel lobby. There are desks and seats with hotdesking facilities, and hotel check-in to the right.

This lobby space is flanked on either side by the hotel’s hospitality offerings – both pitched at the local Adelaide market as much as to travellers staying in the building.

On the northern flank is Luna10, a bar that will have a range of cocktails, wine and beer on offer, as well as small plates from its neighbour on the southern flank, the Modern Japanese restaurant Koomo.

Koomo is split into four distinct zones. Patrons will enter into the casual seating area, with several communal tables, bar seating and booths; in the middle is the restaurant’s bar, skirted by stools; the southernmost section is the more formal dining area, featuring a broad view into the kitchen; and there is outdoor seating also available on the balcony.

Koomo’s food and beverage manager, Lucy Blanch, promises plenty of theatre from the kitchen, and the occasional visit from executive chef Patrick Chung, but there is little that can top the visual experience offered through Koomo’s floor-to-ceiling windows.

The balcony offers an unseen perspective of Rundle Street from directly above, and there are views across the city and out to the Hills.

Inside the restaurant, the design draws heavy influence from Japanese materials – light timber is used extensively – while some features bring an art deco feel to the space.

Lucy brings into Koomo three decades of hospitality experience, beginning in her native Newcastle as a chef, before transitioning to front-of-house and travelling across the country with the IHG hotel group, the management company behind Crowne Plaza Adelaide.

She came to Adelaide for this project in December, and has slowly ingratiated herself into the city’s food scene – dining out at all of CrownePlaza’s East End neighbours.

So enamoured has Lucy become with Adelaide itself, she and her partner have purchased a house here. 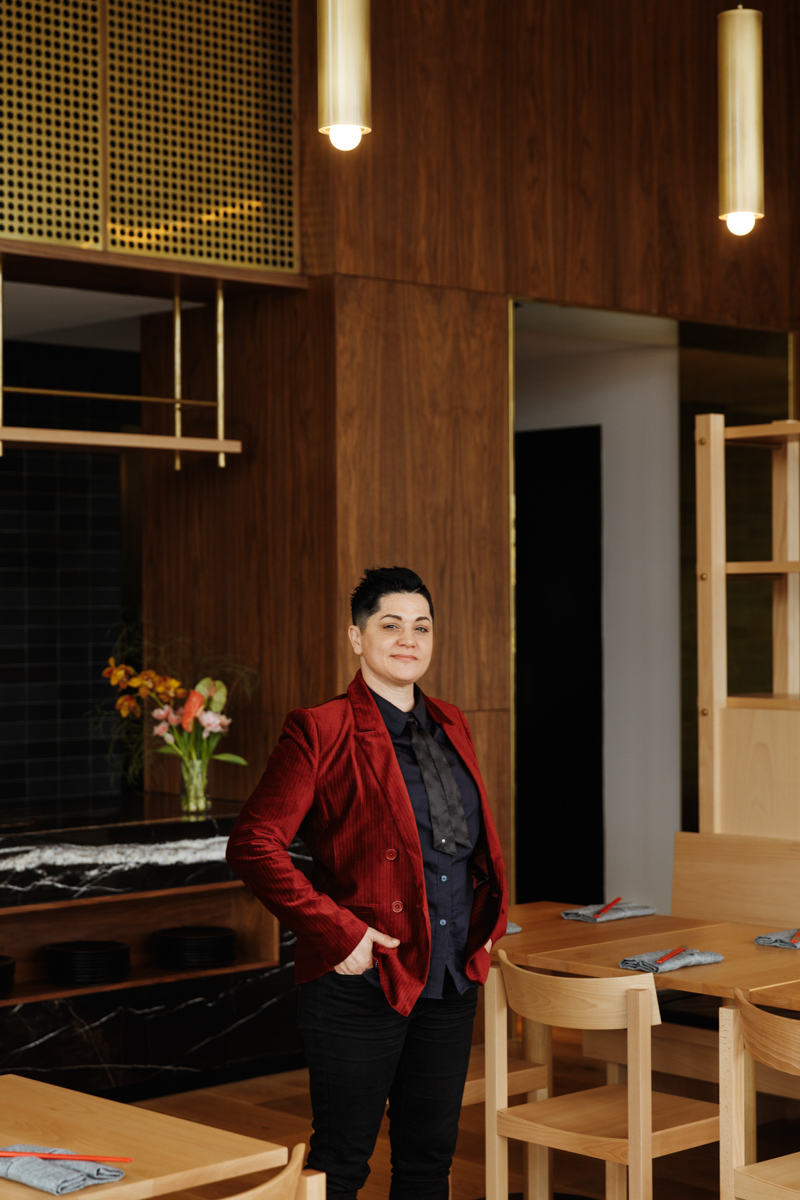 “I love Japanese food in general – pizza and Japanese food, they’re my favourites to go to. So I think also being here, not just in the hotel, but doing something that you love and then one of your favourite foods, it’s a three-tick scenario for me.

“There’s a real Asian influence throughout the whole of Adelaide… so [Koomo will fit] absolutely perfectly.”

“It is three-quarters [South Australian], but due to international business folk that fly in, fly out, if they want something from their hometown,” Lucy says.

“I’ve really tried to capture each market so people feel comfortable. That’s all I want to do, is for you to enjoy yourself.”

There will be classic cocktails available, as well as a selection of Japanese whiskies – Koomo has been made part of the House of Suntory’s South Australian allocation.

The beer taps will be predominantly filled with Lion brews, with one tap left aside for a rotating craft brewer, as well as some local cans from Pirate Life, Coopers and Mismatch.

Chef Patrick comes with another 30 years working in the industry, mostly in Fiji and Australia, with his last eight years spent working at the Riverside Restaurant within Adelaide’s InterContinental Hotel.

While Koomo’s culinary direction draws most heavily from Japanese influences, Patrick riffs on cuisine from across Asia. 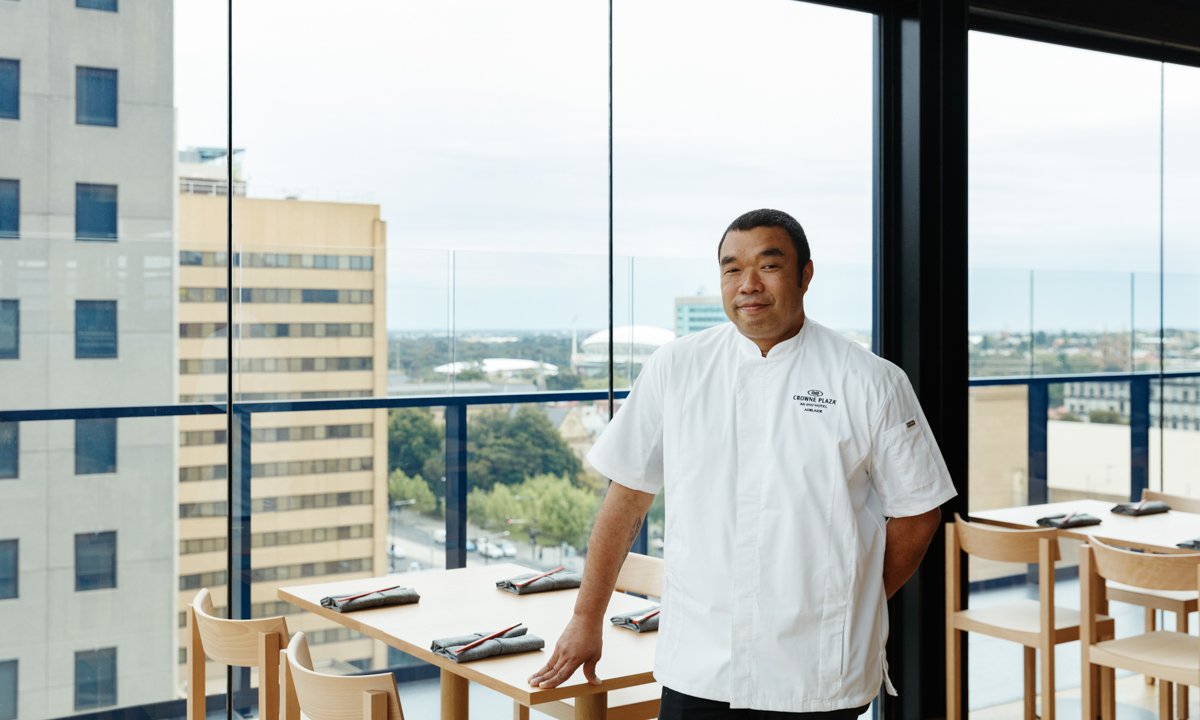 “A lot of it is Japanese-based and Japanese fusion,” he says.

“There’s a bit of Chinese influence, and a bit of Korean, there’s kimchi. And a lot of seafood, it’s predominantly seafood. Curries. There’s a lot of curries back home, so there’s a dish that is chickpea curry.”

There are dumplings, katsu sandos, and larger plates, like the restaurant’s wagyu beef. But for Patrick, the ramen is the menu’s defining dish.

“The ramen is a lovechild, I would say. We’re still processing, still refining, still getting it right,” he says.

“A lot of people just think of it as a bowl of soup, but if you view it from a chef’s perspective, it’s more than that, you know? There’s a lot of hard work going into that.

“I want to build on that so we’re known for our ramen. And known for the fact that it’s our ramen. It’s our version of ramen.”

Koomo is designed to cater for almost any occasion, from casual to formal dinners, express lunches to feed workers who’ve returned to the CBD, and you’ll even be able to get a bowl of ramen sent up to your room, if you’re so inclined.

Level 10 also has some hotel facilities, like the TechnoGym (a gym you can log into to take workout data with you as you travel, and not a rave with dumbbells as we first imagined) and rooftop pool, with views from the Hills to Adelaide Oval.

Luna10 will also service the pool area, for peak summer vibes, but this will be predominantly aimed at visitors staying within the hotel.

For the upcoming summer, though, Crowne Plaza does plan on hosting events here for the local market, while interstate travellers remain low in number. 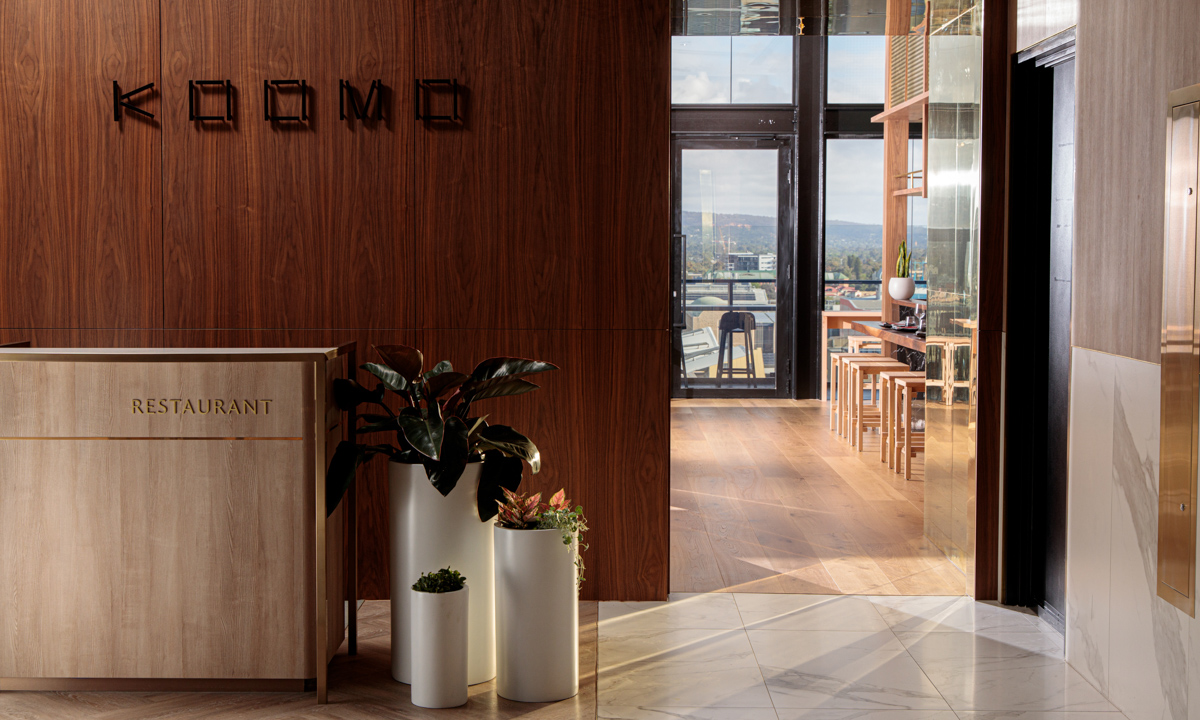 Having the lobby and hospitality offering on the 10th floor of a hotel is still a new concept in Adelaide. General manager Sarah Goldfinch, who joined the Crowne Plaza Adelaide team from her previous position at Novotel Barossa, knows this means diners must feel welcome as soon as they walk into the space.

“We had that challenge of height of location, so when people do come up, it’s making sure they’re welcomed,” she says.

“I think that we’re priced right, but at the end of the day the quality of the food and the service provided will sell the space. But getting the atmosphere right, all of that combination, should deliver a great product.

“True foodies will seek out something unique. They will find us on level 10, and again, if we create the buzz, through product, environment, service, and getting that combination right, we should create that buzz and get people coming all the time.”

Koomo is scheduled to launch on 2 November, but bookings are available now via the website.

The ground floor retail tenancies are not yet leased, but will be announced in the coming weeks.