Syrian Mobile Disco is an Arabic barbecue and party on wheels

Founder of Hommus Where The Heart Is and Tiger Mountain, Mark Kamleh has a new concept that will see him cooking family recipes and spinning tunes from the back of his convertible Ford Capris at Beer & BBQ 2019.

After a few years away from Middle Eastern cooking, Mark Kamleh is returning to his roots with food stall and party-on-wheels, Syrian Mobile Disco.

Adelaide gourmands with a penchant for pop ups will remember Mark’s first food stall Hommus Where The Heart Is, and his follow-up Fringe lean-to situated next to the Exeter, Tiger Mountain (now three years running).

Syrian Mobile Disco is a new concept evolved from where Hommus began.

“Hommus Where The Heart Is was mainly just wraps and quick easy food for high-volume events like Laneway Fest. Now it’s a bit more on the foodie side.”

Syrian Mobile Disco is launching this weekend at Proof’s Chardy Party, before taking up residency next week at Adelaide Beer & BBQ Festival, within the events newly diversified barbecue offering.

At Proof’s Chardy Party, Syrian Mobile Disco will offer a short menu of “chicken and falafel plates and wraps,” whereas the Beer & BBQ stall will be a larger representation of Syria’s food culture and the kinds of meals Mark’s dad prepares for family gatherings.

“Dad left Syria when he was 18… He took his Mum’s recipes and he just loved cooking. He moved to Australia and he just kept cooking.

“We’re doing shawarma spiced chicken, so shawarma is kind of like kebab-style, which is normally cooked vertically, but what makes it shawarma are the spices. So just doing that over charcoal.

“Camel kofta, just for something new. We don’t really cook camel at home, but it’s just – why not? There’s heaps of it here.

“We’re doing falafel as well, an absolute classic. Kibbeh nayyeh, which is a raw lamb dish. It’s kind of like Arabic tartare, is the easiest way to explain it. I don’t know how that will be received, but it’s my favourite dish of all time.

“And then standard stuff – wraps on plates and humus and baba ganoush and heaps and heaps of pickles.” 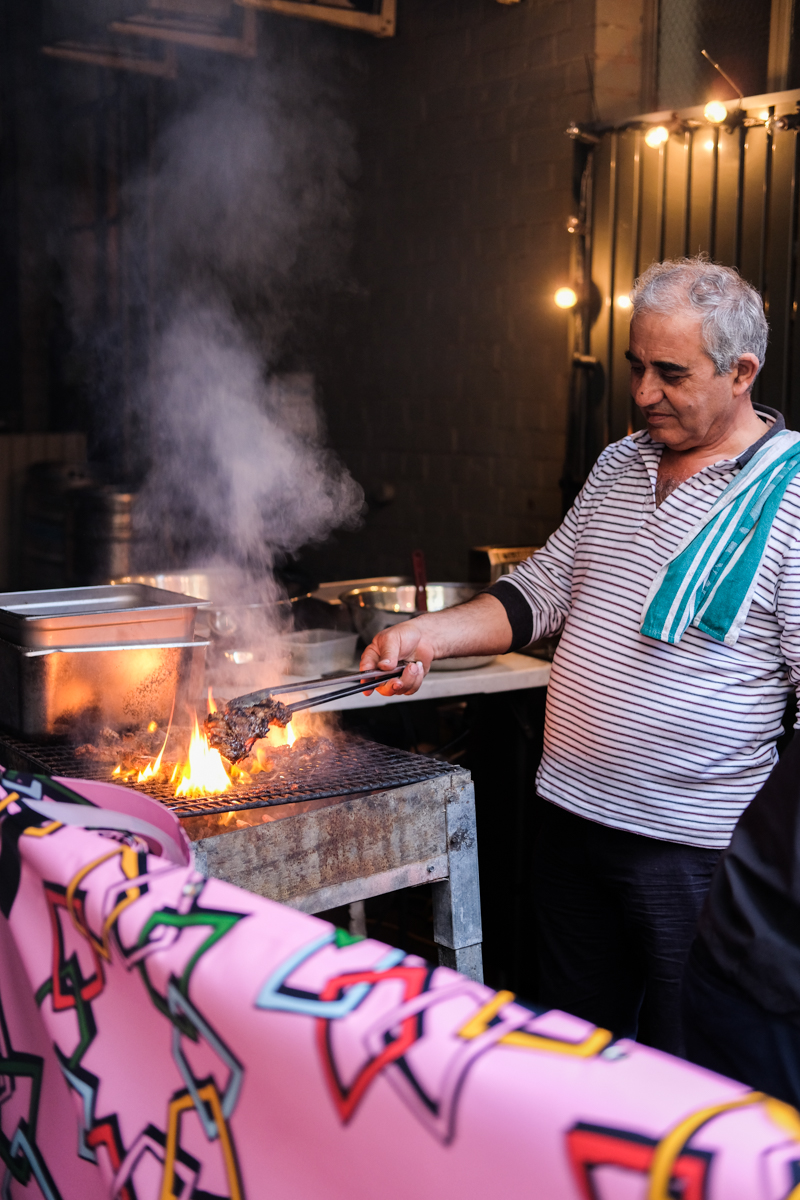 Papa Kamleh on the tools 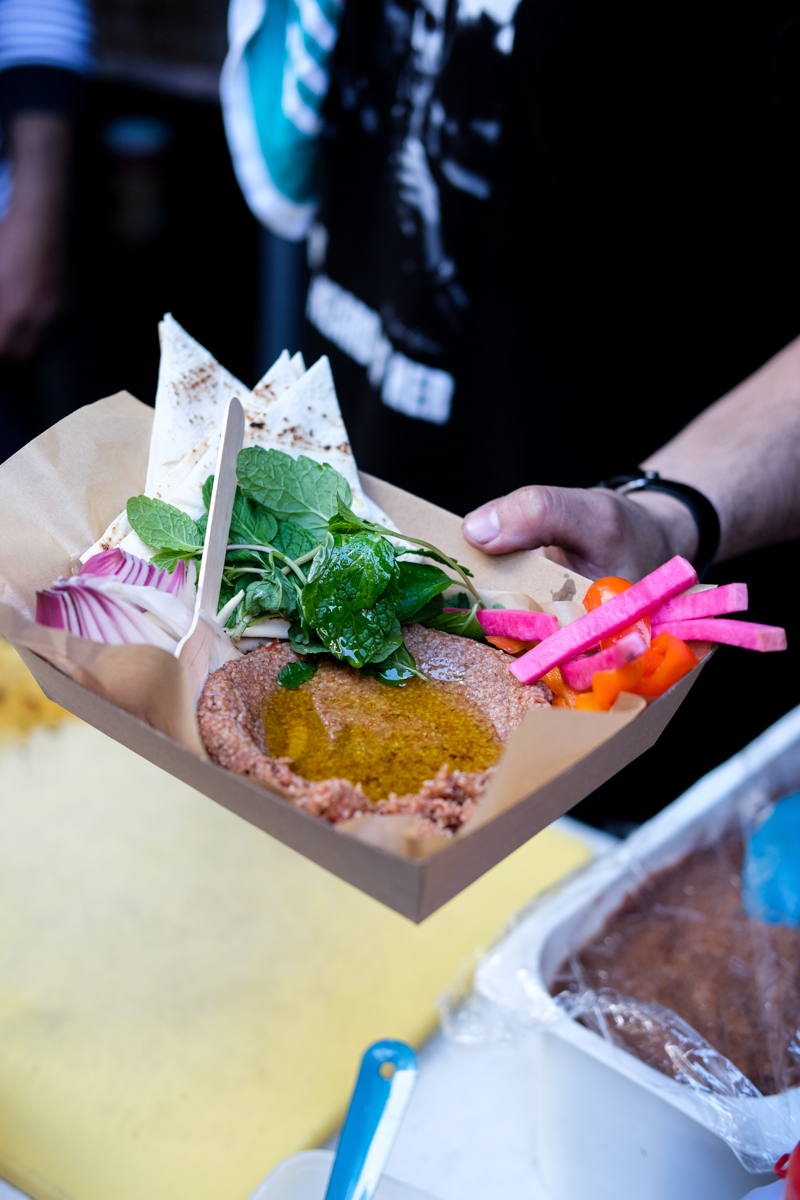 Syrian barbecue is just one aspect of the business. The Mobile Disco comes in the form of Mark’s convertible Ford Capri.

“The whole package is food and deejays…It’s just combining the two things I do the most of,” Mark laughs.

“So at Chardy Party, I’ll have friends deejaying under the Syrian Mobile Disco banner, with me doing the food out the front. The convertible helps with that, so it’s a portable deejay booth.

“There’s going to be a secret dance floor at Beer & BBQ, which will have the car and deejays, and that will be the mobile disco part at Beer & BBQ.”

Mark reached out to local artist Billie Justice Thomson for Syrian Mobile Disco’s artwork, which is an interpretation of the Syrian coat of arms with a “sassy” eagle, Mark laughs. Billie was also involved in Tiger Mountain’s branding and so was an obvious choice for Mark’s new venture. 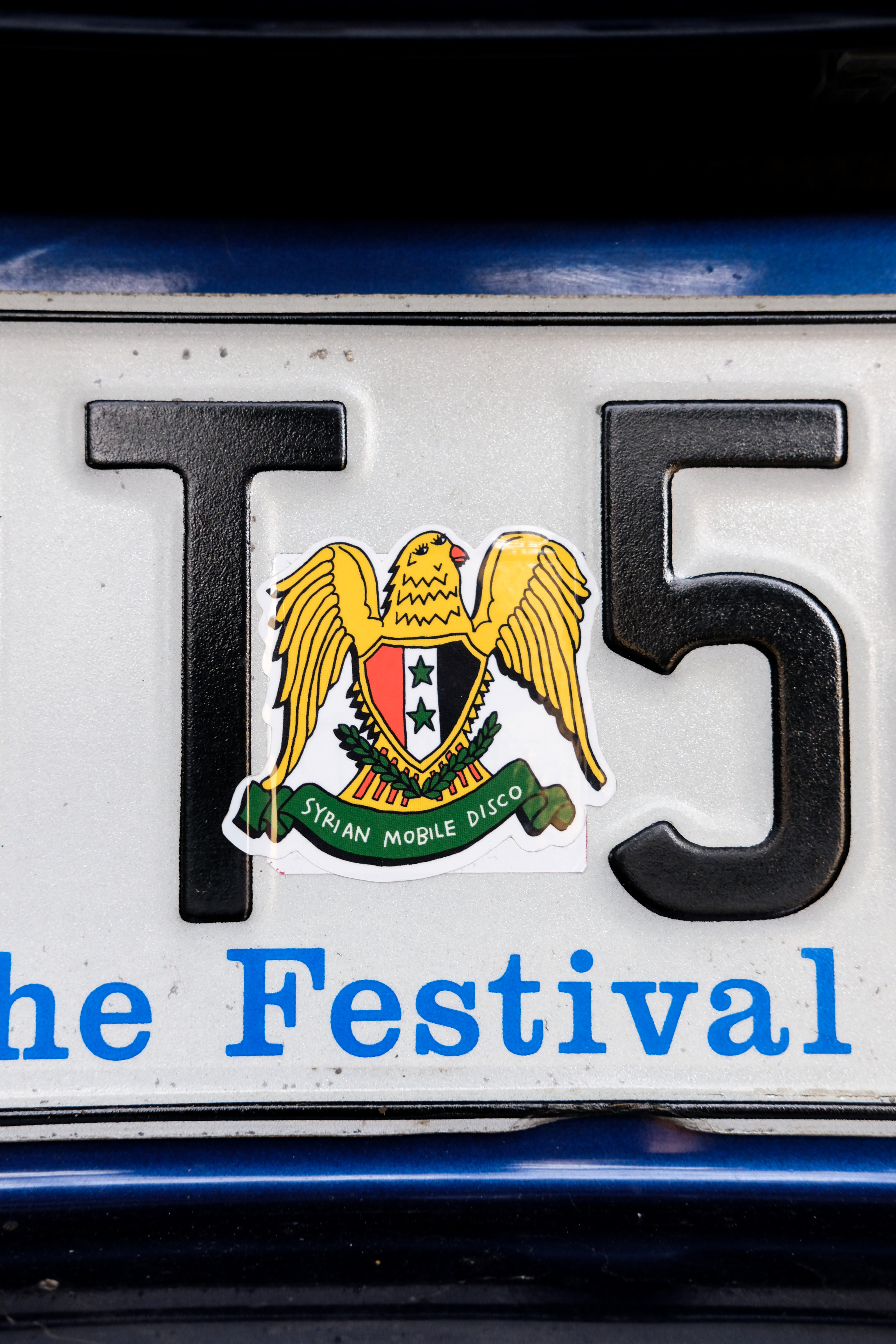 “I’ve always liked her stuff, just seeing her stickers everywhere, and then when I met her we had heaps of mutual friends,” Mark says.

“I had an idea for Tiger Mountain’s logo, I sent her my idea and she said ‘That’s dumb. How about this one?’ And it was obviously considerably better.

“It was very easy, she just whipped it up real quick. It made sense to get her for Syrian Mobile Disco.”

Mark took a break from Arabic cuisine after finding his Hommus Where The Heart Is concept limiting. He intends to operate both Tiger Mountain – an Asian-influenced barbecue concept – alongside Syrian Mobile Disco, but hopes to develop the concept and potentially carry it into a bricks-and-mortar Syrian restaurant.

He’s also planning one-off dinners at venues like Oddio (where we’ve met for our interview) to provide a more formal sit-down experience. 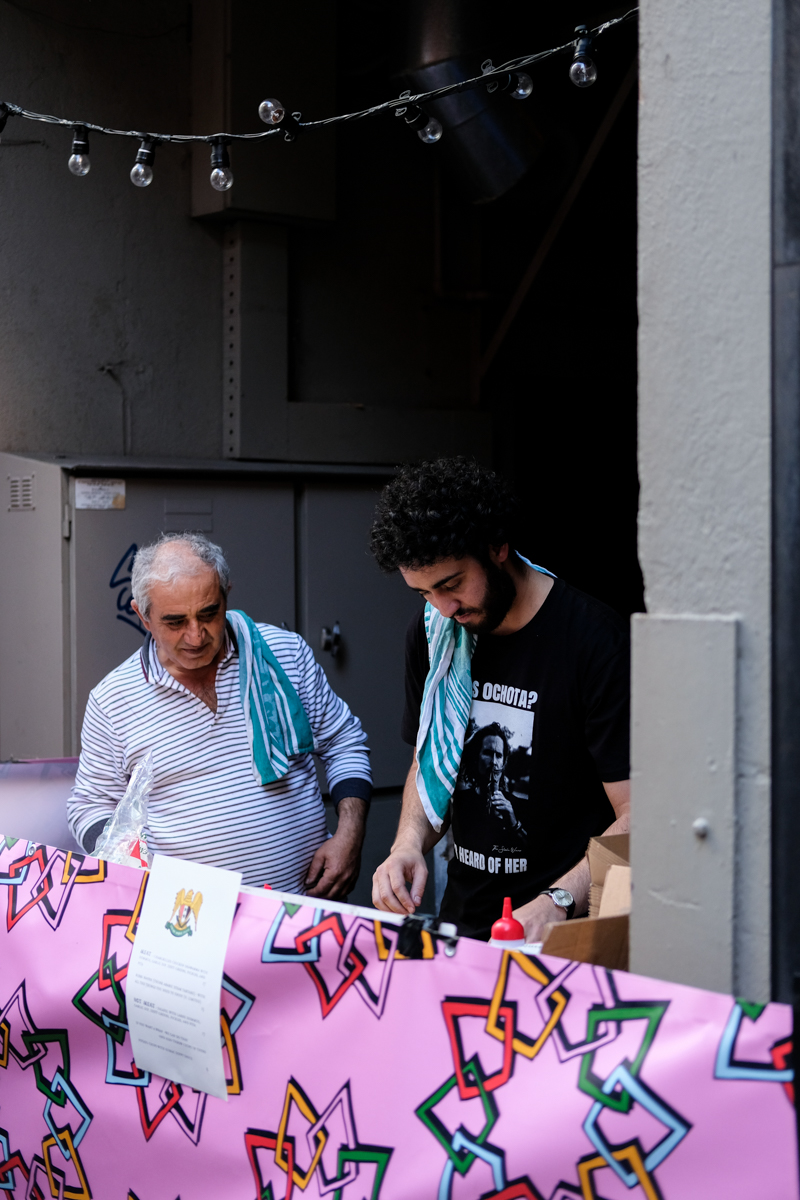