Illustrator Elaine Cheng looks at the well-loved SAD:Cafè with fresh eyes as she sketches out another place for you to visit on your Friday break. 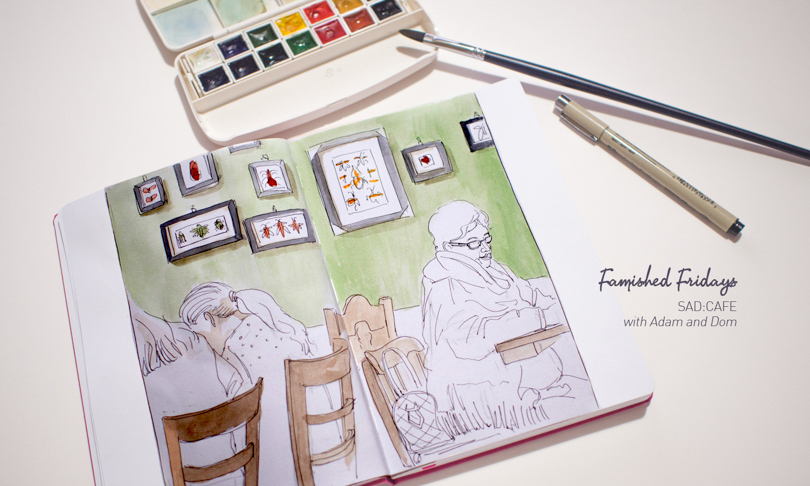 When you’re looking for a good place to meander with a cup of coffee and fresh, wholesome food, you can never look past Ebenezer Place. Take a swing by those archways, and you’ll see a buzzing crowd of customers seated in front of every cafè. Tucked among them is a team of hairdressers who watched it grow from the very start.

To see more of Elaine’s illustration and read more of her articles visit her blog – Fill Me In.

If you know DAS:Hair Salon, then you know its next door counterpart, SAD:Cafe. While Adam snips away at your hair, the aroma of baked eggs and coffee brewed by Dom drifting in from next door will have already convinced you to make plans for lunch at the cafè.

This week, we managed to catch owners Adam Darrie and Dom Ossa for a chat during their lunch break.

Born in Germany, Dom Ossa had moved to Manchester and worked as an apprentice carpenter and hairdresser. After meeting his wife, Saffy, the couple flew to Australia in search of change and a new lifestyle. They started in Brisbane and traveled along the coast to Perth, Newcastle, Sydney, and finally settled in Adelaide.

“There was good wine, good food, it had a gorgeous coastline, and it was quiet. We fell in love with Adelaide and decided to stay,” he says.

Adelaide-born Adam Darrie had lived in New Delhi in India until the age of 7. At just 17 years of age, he was already studying hairdressing on his own in London. At the age of 24, he moved back in with his parents in Adelaide due to financial struggles. Working as a hairdresser at TONY & GUY, he started DAS Salon with Dom and Saffy in 2009, and thus, the three-letter acronym was born.

Aside from Nano Cafe and Midwest Trader, their boutique salon was the only other business on Ebenezer Place that is still open today. “It was so quiet back then,” Adam says, “Hardly anyone came down to this end of the city, we could sit out the front of the store with a couple of beers and only see one person walk by the entire day.”

Eventually, DAS flipped its name around and opened SAD:Cafè next door.

“We always served coffee in our salon,” Adam says, “but we were always waiting for someone else to start a cafe here, so we could have our daily fix, but no one did, so we went ahead and started our own cafe.”

This was partially driven by Dom’s love for coffee. Perhaps it was his German heritage that fostered the obsession, or the influence of his mother who owned a small cafè in England, nevertheless he was no longer focused on hairdressing.

“My concept for SAD:Cafe was to offer food that would showcase the local produce. Fresh, simple, and classic. There were plenty of places doing Italian and American cuisines already. I thought it would be good to offer something Australian,” says Dom.

On the topic of Australian cuisine and its much contended identity, Dom was thoughtful

“It may be hard to define what Australian food is at the moment, but that’s simply because it’s still quite young, it needs to be developed over time. Right now, I see Australian food as a bit of everything. There’s inspiration from British food, American food, Italian food… if we start simple and just use our local produce and what is immediately available to us, then the food we make will start to reflect the land and the people.”

Six months after the opening of SAD:Cafe, Hey Jupiter opened across the road, followed by a number of other eateries.

“We got to watch Ebenezer grow into the lively place it is now, in particular, the shift from retail to hospitality. There were a few local clothing stores here before a sudden wave of cafès and restaurants took over the space,” says Dom thinking back to the earlier days, “We used to sell vintage wear in our salon as well.”

“Some people wonder if the competition worried us, but above anything, we were more glad about having activity in this area. All the cafes here offer something different, we all do equally well, it’s a great mix.”

Now with SAD:Cafe running well into its 6th year, Dom has shifted his focus.

“Ever since I opened SAD, I noticed a huge lack of local coffee suppliers and roasters compared to Melbourne and Sydney. Dawn Patrol Coffee stemmed from this.”

Dawn Patrol Coffee is Dom’s latest venture. After buying a house in McLaren Vale, one of South Australia’s finest wine regions, Dom has set up the coffee roaster in a cellar door.

“It’s a great place to start,” he says, “People in the area are already familiar with wine tasting. Coffee is a similar concept that they can appreciate.”

Dawn Patrol coffee on display and for sale in SAD Cafè

“Adelaide is trying to grow and develop its own identity, but we always seem to be looking to Melbourne. I hope Dawn Patrol Coffee will help Adelaide become more independent and develop its own culture. Local cafes shouldn’t have to find and rely on roasters and suppliers interstate, we need more people to build our community and provide more local produce, just like the identity of Australian food.”

Pop into SAD:Cafe if you’re looking for some unique renditions of  classic dishes. There’s even power points and wifi for you university types. It’s a cosy little place to snuggle up for winter and the staff will keep you warm and caffeinated, while the food is fresh and wholesome with generous portions (their sweet potato burger is the size of my face).

Oven baked beans in roll: served in a seeded roll with grated parmesan cheese, avocado and a fried egg – $15.00