Rundle Street institution Vego and Loven It is up for sale

Robin Eastwood has run vegetarian restaurant Vego and Loven It for over three decades. The puzzling cook – who once huffed at a request to serve the Dalai Lama – explains why he’s hanging up the apron for good.

Robin Eastwood would rather tell CityMag the lowlights of working at restaurant Vego and Loven It before the highlights.

“I almost kissed the ground every day when I walked up the stairs and the refrigerator was working,” Robin says over the phone.

Vego and Loven It is currently closed with no plans to open in the foreseeable future.

But it’s up for sale. Click here for details.

“My partner and I split up because she said I spent too much time in the café, which I did, and said I was married to the job.

Robin opened Vego and Loven It in 1988, back when Adelaide’s vegetarian scene was basically non-existent, he says.

From a tiny shop on second floor of a Rundle Street building, Vego and Loven It sold cruelty-free wholefoods, like bulk tahini and dried fruit, and takeaway meat-free meals.

Customers preferred Robin’s cooking more than the shop’s retail line, so the team altered the interior and expanded the menu to include generously sized burgers, falafel, wraps and soup.

Shelves were replaced with eclectic seats and tables, and the walls were soon covered in postcards, oil paintings and mosaics.

Robin’s restaurant sat perched above the East End for decades and garnered a reputation. CityMag knows the space as one of the best spots in the city for a vegan feed.

But Vego and Loven It may have reached the end of an era.

“I’m using this as a vehicle for retirement,” Robin explains.

“But nothing is ever concrete. You might walk in a month’s time down Rundle Street and walk up the stairs and find me up and running it again, if I have no success with the sale.”

Robin always planned to retire at the end of the property’s lease cycle, which expires in two years.

Despite his impending retirement, Robin says he’s feeling “overwhelmed” and “demoralised” by the sale, which includes plant and equipment or the entire business itself.

“It’s not a case of not loving it anymore,” he says. It’s simply a case of exhaustion.

Robin eventually became the restaurant’s sole cook and waiter, waking up at obscene hours of the morning for work.

Six years ago he made the decision not to hire anyone else, and do it all himself. He couldn’t find the energy to train another employee that would leave in six months.

“I was just thinking, ‘I simply cannot go on with this training of staff members anymore,’ and that was the reason I started running it by myself.” 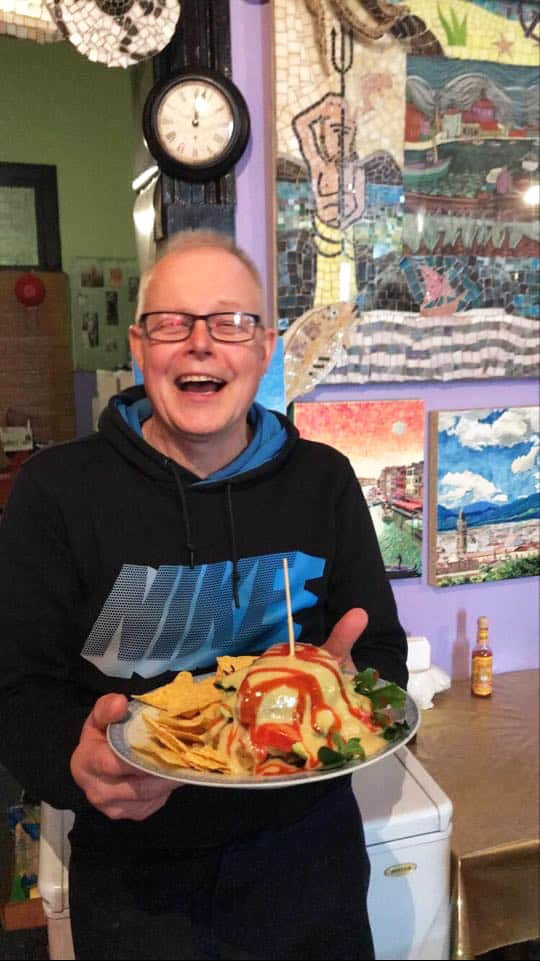 A suitable amount of melted cheese. This picture: Supplied

Robin’s unorthodox approach to hospitality is well known in Adelaide. He would often close Vego and Loven It’s door during peak hours of service, once he had enough patrons inside. This was so he could adequately manage the workload, he explains.

He eventually put paper on the window with a sign saying “no knocking.” Regulars had his phone number so they could be let in.

In the instances where CityMag was able to successfully snag a table, we would wolf down a giant Bali Burger slathered in peanut sauce as a result. In the times we have been frustratingly denied entry, the restaurant’s allure would only increase in our eyes.

Robin’s ability to be selective about his clientele is a result of his favourable rent conditions. Any other trader on Rundle Street, pre- or post-pandemic, could not afford to do deny entry to willing customers.

“The rent is still… what’s kept me there,” he says, “and it’s what destroys businesses who open on the ground level.

“When I look at the [small] numbers of people those ground-floor businesses have, you’re just wondering, ‘What the hell are they doing there?’”

The necessary griping about life in small business now out of the way, our conversation turns to Robin’s highlights from his 32 years in business.

Among his most memorable customers are all five members of Aerosmith, in the early ‘90s, as well as cricketer Greg Chappell and Sir Donald Bradman’s son, John.

We’ll miss Robin and this happy slice of yellow

But, in a classic Robin moment, he recalls a missed once-in-a-life-time opportunity to serve Buddhist big-wig, the Dalai Lama.

In his telling of the story, it’s clear Robin regrets nothing.

“This is a beauty, too,” Robin begins with a chuckle.

“Maybe it was a Friday or something like that, and we’ve been busy the last couple of days.

“His secretary called and said, on behalf of the Dalai Lama, ‘Is there any chance we could make a booking?’

“I just thought, it’s gonna put the whole day out of whack. It’s like a broken washer or a tap or something like that, and it demands my immediate attention.

“This was just going to create dramas because I’ll be under pressure trying to make him really great food and everything like that. I think he hung up probably thinking ‘God, I’ve never had anyone sound so negative.’

“The secretary would have looked in the phone book and saw the name Vego and Loven It and would have thought ‘That sounds like a fun place.’ Surely they would have laughed.”

Vego and Loven It is currently closed, and Robin has not plans to reopen in the immediate future.

If you’re interested in purchasing the Adelaide eatery that once upon a time (inadvertently) denied the Dalai Lama, see more information on Vego and Loven It’s sale here.