Russian restaurant and bar Red October is celebrating the iconic German beer festival, Oktoberfest, from 22 ‘til 26 October, offering a Russian-influenced take on the festival – Red Oktoberfest.

“It was kind of calling our name,” says Red October’s co-founder, Marina Tazhdynova.

“I don’t know why we didn’t think of that earlier. Also having that many beer taps it is a good opportunity to showcase something a little bit different. In this case, more German style varieties.”

Throughout Red Oktoberfest’s six days, the bar will load up its taps with hefeweizen, dark lagers, Kolsch, Berliner weisse and a range of other German styles, sourced from local breweries Barossa Valley Brewing, Lobethal Bierhaus, Mismatch and Prancing Pony, and from 4 Pines and Feral Brewery interstate.

Red October will also change up its food menu to match the beer offering, focussing on food designed to go well with a brew.

“We mostly based [the menu] on what a Russian beer venue would have on offer,” Marina says.

“There are plenty of snacks to chase your beers if you don’t feel like a full dinner. However, if you do feel like one, there are still mains on offer, and pretty exciting ones, like a massive pork hock, venison Wiener schnitzel – you know that huge and very thin one? – thick cut steaks.

“I am pretty excited about fried camembert. I tried it first in Germany ages ago and it was so delicious. Crispy outside, oozing in the middle, served with tangy cranberry jam.

“We are also bringing back our very popular Fish-as-Chips for one week only. That’s a small whitebait in potato starch deep fried till it’s crunchy.” 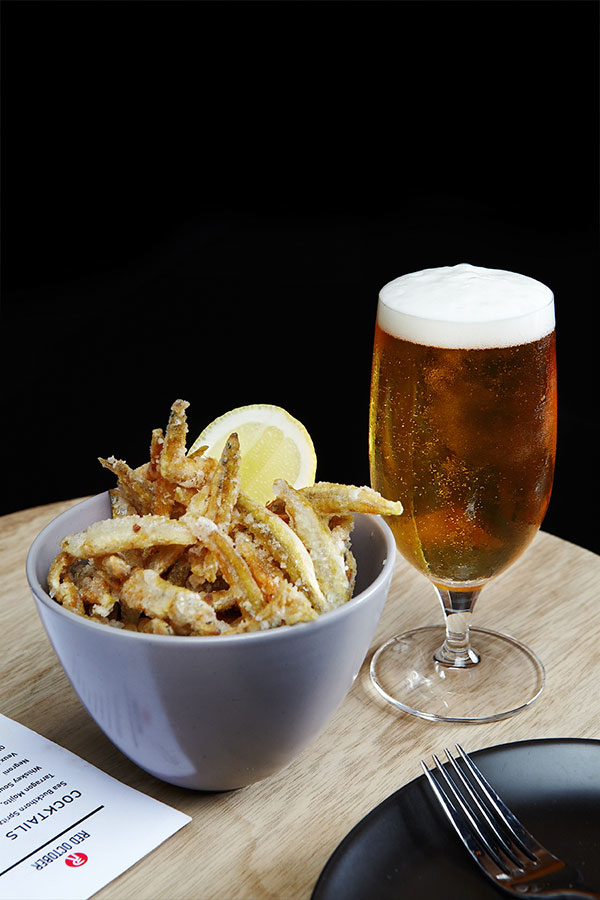 On Sunday, 28 October, the celebrations continue, with a tap runout party, with whatever’s left over in the beer kegs going at cost price over the bar.

“We are hoping to get quite a few of hospitality people to come along and enjoy their day off together with us,” Marina says.

“Kitchen won’t be open on that night, but myself and Roman will jump behind the grill to cook up sausages and other easy-going snacks.

“Overall, it’s planned to be loud and jolly, with good music to match the environment.”

Marina encourages keen Oktoberfest eaters and drinkers to book a table ahead of time to save disappointment, and there will also be opportunities throughout Red Oktoberfest to enter raffles and win mugs, t-shirts, stubby holders and (best of all) more beer.