With the exit of chef Jack Tonkin, Ex-Orana and current-Quality Noods chef Justin Healy has taken over the kitchen at Good Gilbert.

After wrapping up a year-long farming role at The Dairyman just before Fringe season, chef Justin Healy has spent the last couple of months on the hunt for a new kitchen gig.

Justin is a one-time Orana chef but recently come to prominence in the Adelaide restaurant scene through his own start-up, the semi-regular ticketed ramen pop-up Quality Noods, which he’s hosted at the Exeter and LOC Bottle Bar.

He has now found a full-time home in the kitchen at suburban bar Good Gilbert, following chef Jack Tonkin’s departure.

The outgoing chef was in the job since January but has departed the state for an opportunity to work in the kitchen at Brae in Victoria.

Justin assures CityMag the Quality Noods pop-ups will continue (alternating weekly at Good Gilbert and LOC Bottle Bar), but he took the job so as to expand his sights beyond soup.

“It’s a nice thing to not do noodles. Because I’ve been cooking a lot of noodles,” he laughs.

“I walked in and they were super keen for me to come on board and take the food in any direction that I’d like, which is going to be really fun.

“And doing it with another small business like this is a good way to try out a few different ideas and different ways of doing things.” 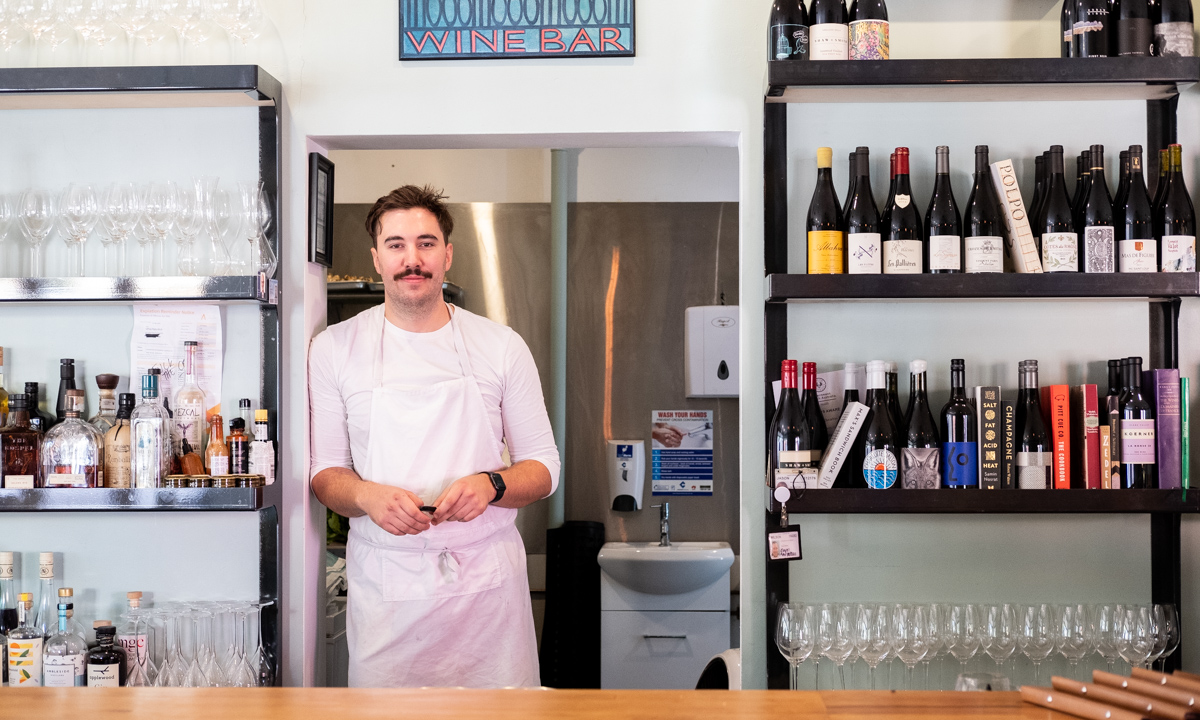 Justin says the menu he’s created has a “semi-French” focus and a fierce allegiance to South Australian suppliers – understandable given his 12-month sojourn into primary production.

“My philosophy of local food is extremely set. It’s got to be local,” Justin says.

“I don’t really want to hear about anything that’s not from South Australia.

“I’d say the menu is indicative of what I want to do – something that everyone knows, but not exactly presented in the way that they’re expecting it.”

The menu consists of half a dozen small bites and sides ($6—$13), a short list of mains ($18—$28) and a few dessert and cheese options (all around $15). This offering will iterate and evolve on an extremely regular basis. 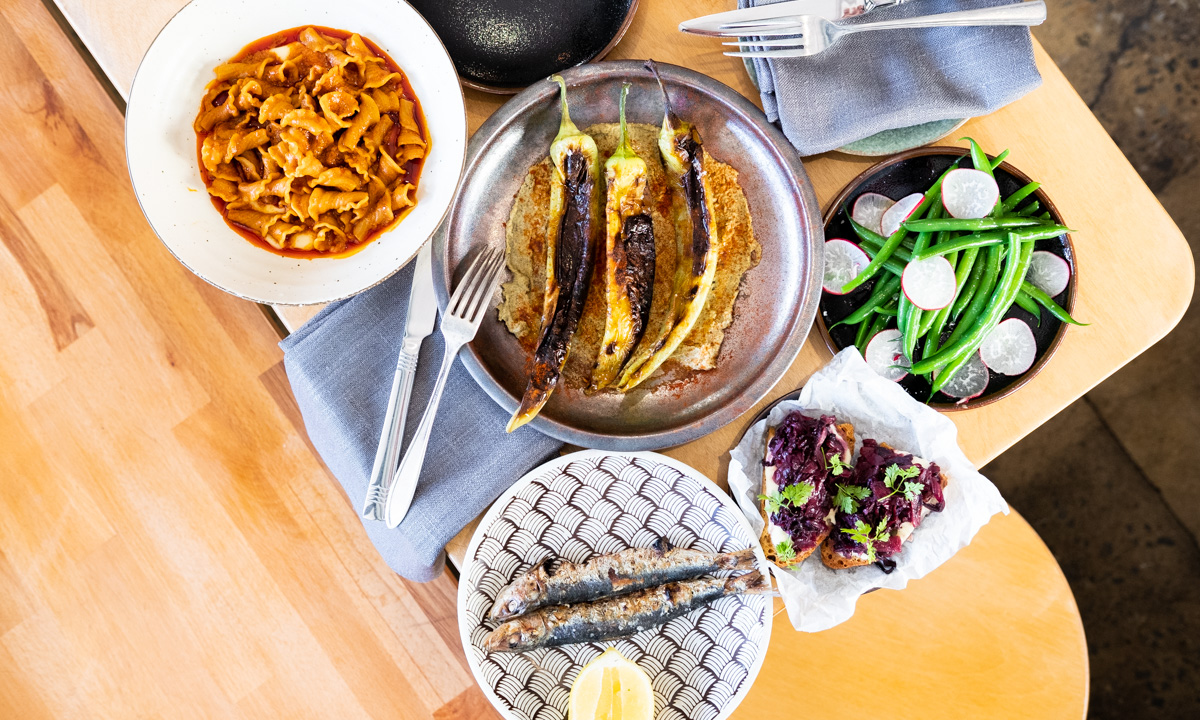 “The farmer tells you what’s good, you order it, and you work out what you’re going to do afterwards. It’s been really freeing like that,” he says.

Good Gilbert has won over a loyal clientele in its four months of operation, and the menu has been designed to allow for casual interactions – a small plate or two shared over a couple of glasses of wine – which can scale up to a full meal and a bottle or two if occasion calls for it.

Justin has found that his menu’s seasonality has also been a selling point for Goodwood locals, who seem to have an insatiable appetite for the new.

“Goodwood Road is so dynamic; there’s so many different businesses and everybody that comes here always talks about, ‘Oh, this place is so good,” he says.

“They’re really keen on something different and new. The last menu wasn’t around for that long, but they’re still, ‘Oh, new menu!’ They’re really excited when things change.”

“He [worked] at The Dairyman, rearing livestock and butchering, making different meats and whatnot, that was a big tick, because down the line we have got bigger plans in what we want to achieve, and that really lays well into what we’re going to be looking to doing,” Wilson says.

“And confidence as well,” Jason says, “having the confidence to take on a one-man kitchen, or two when it’s busy.

“The confidence to change a lot and do exactly what you want to do within the parameters, that’s pretty cool to see someone take that opportunity and really run with it.” 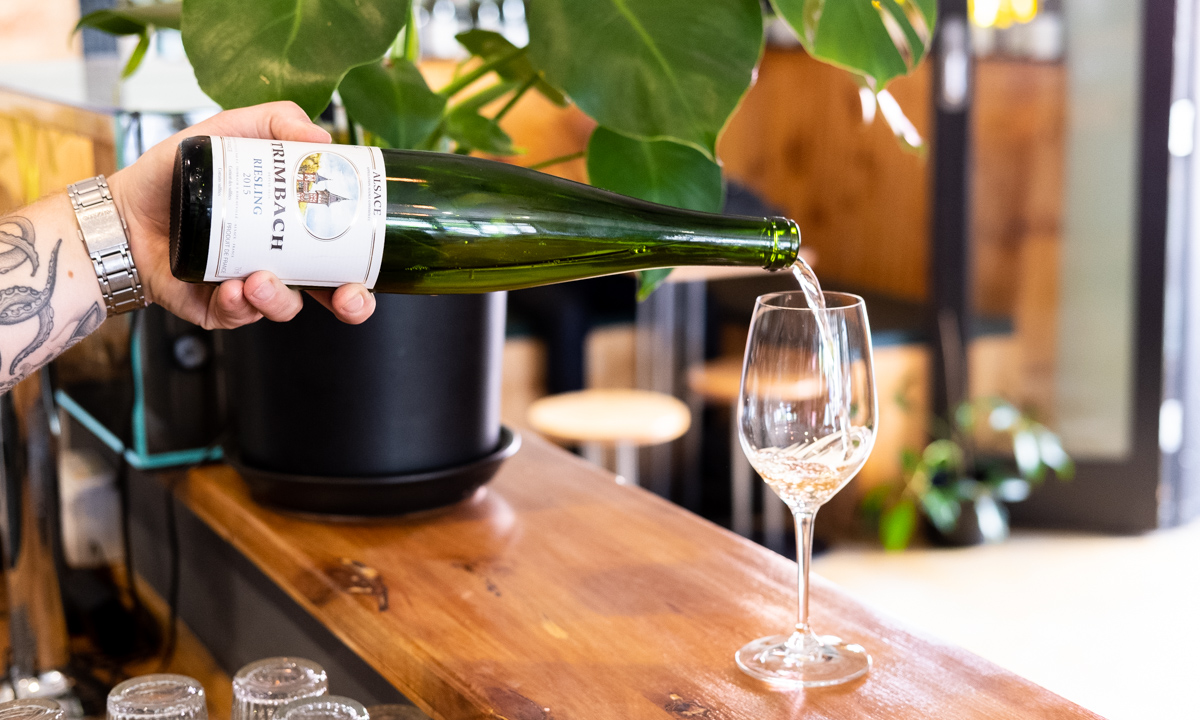 Community has been at the centre of Good Gilbert since it opened, with Wilson and Jason taking the time to welcome locals who would peek in the windows during the build period into the shop so they could get to know each other.

This welcoming nature and their care for the local clientele they say is what’s led to the success they’ve seen so far.

“When we first started we never expected it to take off as it did,” Wilson says.

“And seeing where the menu is now compared to what we thought, it’s a lot more seasonal than what we were posting about, but in a good way.

“It’s developed organically. We haven’t forced anything on the venue; we’ve let our customer base give us a direction.”

The community spirit will be built upon further when the bar launches its Goodwood and surrounding suburbs-focussed wine club, with curated mixed six-packs to be delivered to members (by Wilson’s 1975 Citroen HY van) by the end of May.

The club will also be offered regular events, hosted at Good Gilbert, to taste through the wines along with some paired plates.

“It’s something that I’ve always wanted to do. It’s something I’ve wanted to instigate in other venues – perhaps not to the degree that we’re going to be doing it here,” Wilson says.

“It’s important when it comes to learning about wine and tasting wine that you remove stigma and that arrogance that is so commonly assumed with wine.

“What we’re going to try and build is a really lovely way to help bridge the gap for wines, and do wine education in a really informal way, but informative and fun, and bring together likeminded people in the surrounding suburbs.”

In the meantime, you can stop by Good Gilbert for some considered wine pours and food from Justin Healy from Wednesday through Sunday.