Plus 82’s chicken and burger joint CnB opens in Norwood

The latest venture from the Plus 82 group, Chicken & Burger (AKA CnB), has opened in Norwood.

The founders told CityMag in December last year they planned for the fast-food shop, located within Norwood’s Parade Central mall, to be a competitor to the Colonel’s Kentucky fried chicken.

With his Korean fried chicken, chef Terry Hwang told us he planned to “shake it up.”

Chicken & Burger has launched with a short offering of Korean fried chicken in small, medium and large serving sizes and with six different sauces available. Some of the sauces are tried and true favourites from the group’s much-loved Pocha restaurant, but there are also some CnB debutant sauces.

The ‘secret sticky soy’ is an adaptation of a famous Korean beef rib sauce, tweaked to work with chicken, and the honey butter cheese is “a new trend in Korea,” Terry says.

“It’s salty, sweet and cheesy, and that comes with yoghurt sauce, which is refreshing,” he says.

Each sauce, aside from the honey butter cheese, can also be paired with CnB’s vegan fried chicken.

There are just two chicken burgers on this first menu, the signature burger and a spicy version. Both options are under $10. There are plans to expand this section of the menu once the team has settled into this new shopfront.

“We’re going to make more options after our grand opening and [we] settle down a little bit, otherwise [it’ll be] too crazy,” Terry says. 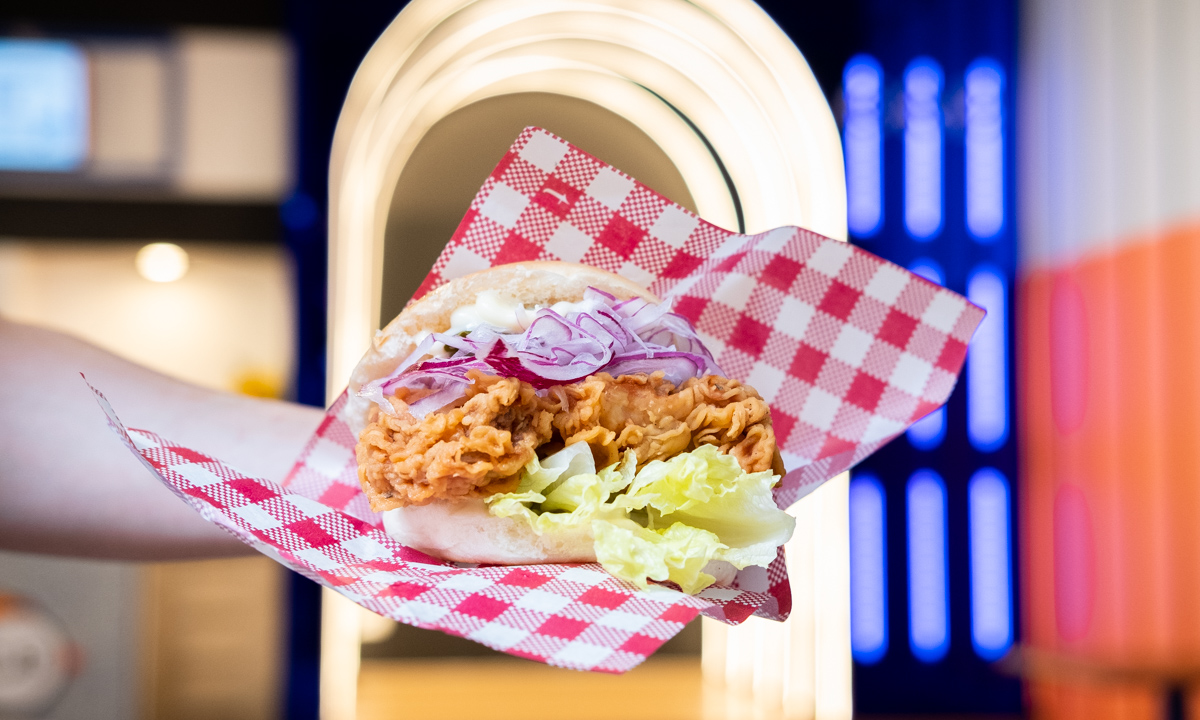 Yet another Korean trend the Plus 82 team is hoping to bring to Adelaide is far more familiar to the local market, and will likely bring about pangs of nostalgia given it’s been 18 months since the last Royal Adelaide Show: the corn dog.

There are two versions: the ‘classic’ with batter, cheese and sausage; or the Ugly Dog, which has diced potato rolled onto its outer layer.

The main element of leverage Chicken & Burger has against its Kentuckian competitor, at least in CityMag’s mind, is its small list of beer available: Cass Fresh, OB Premier, and a house lager on tap, which is produced by Australian Beer Co. 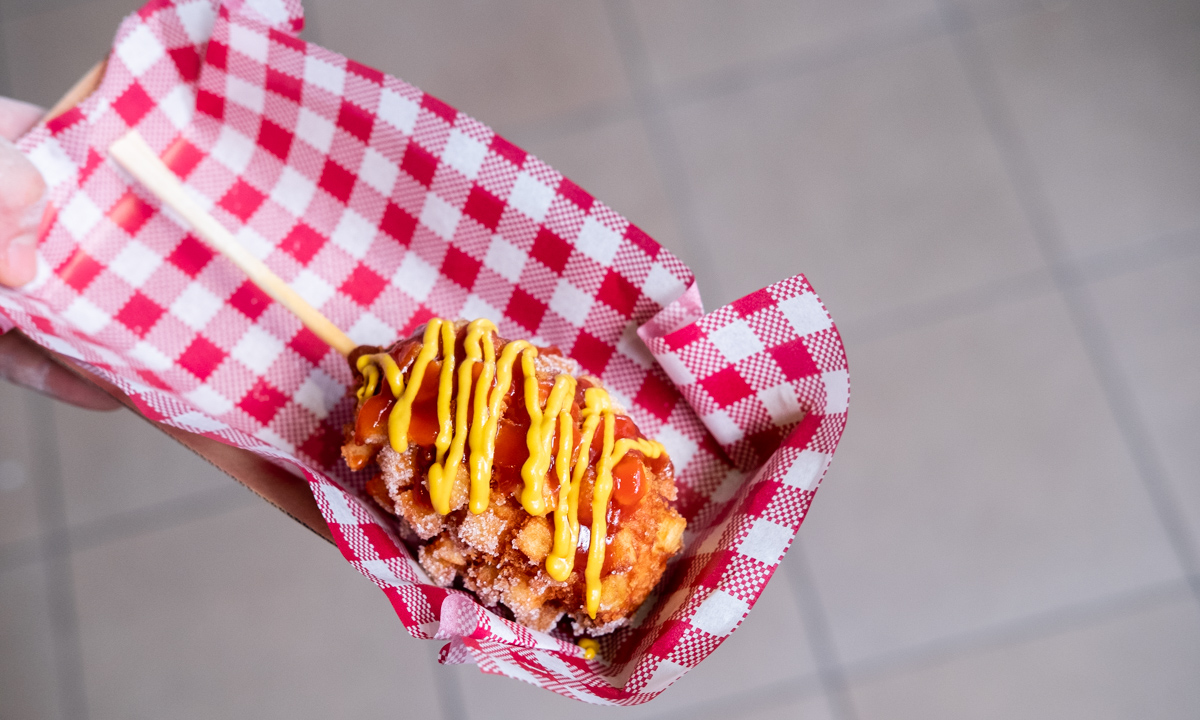 Amber Ma of AMiD Studio designed the fit out, which has been kept light and fun, with block colours and illustrations. There is a small selection of seating, but Steven expects many people will opt to takeaway.

But not, he hopes, before they stop by the “photo zone”: an illuminated, branded blue archway next to the service area that seems aimed determinately at a clientele who cannot legally purchase a can of Cass. 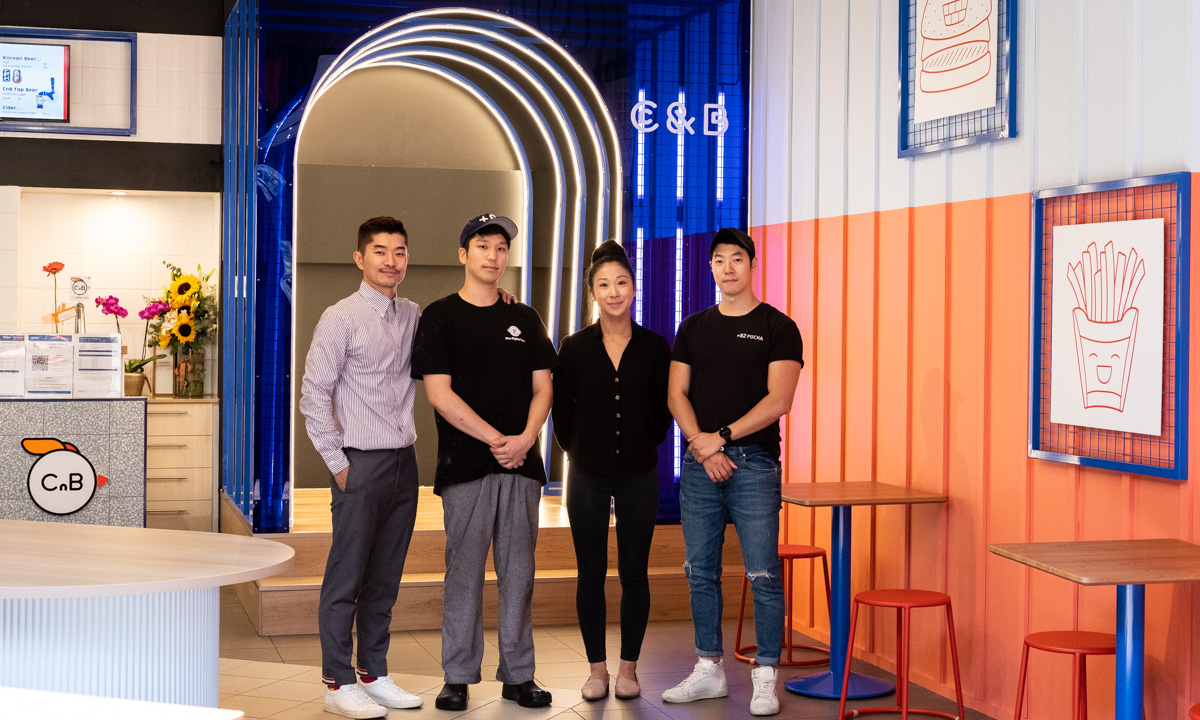 The Plus 82 group has expanded rapidly from its first shop, Pocha, which opened beneath the Black Stump in 2017. It has since opened Plus 82 Lite on Gawler Place, MiMi on Sturt Street, Gogi on Eliza Street, and now CnB in Norwood.

CityMag asks Steven what projects we might see from Plus 82 next, and he smiles coyly. Nothing for the moment, he suggests, at least while the focus is on growing CnB into more locations.

We don’t know if we believe that.

CnB Norwood is open from 11:30am ‘til late seven days a week. Find the store inside Parade Central at Norwood, and connect with the brand on Facebook and Instagram.