Good coffee was an easy starting point for Octeine Coffee in Kent Town.

The café’s founder, Pete Mann, left his career as a geography teacher officially last year, after a five-year jaunt converting his love of coffee into a business.

Pete caught the coffee bug working as a part-time barista and took a roasting course at Aunty Peg’s at Proud Mary’s and got a job roasting for De Groot Coffee in Port Elliot.

Pete took the job with the idea of starting his own brand, Octeine, which would bring together the active culture of “walking, running, socialising – actually getting outside, doing things, and then that association with coffee,” he says.

While contract roasting at Coffee World in Welland, Octeine entered the market and picked up a couple of contracts supplying beans to local cafés.

The team behind gym V2 Fit approached Pete, looking for an operator to open a café in front of their new Kent Town store. He jumped at the opportunity to give Octeine a home, and launched the King William Street, Kent Town Octeine Coffee shopfront in March this year.

Pete had a clear idea of the coffee Octeine would serve at its café: a roast profile with an intense flavour designed to cut through milk and still taste great as a black coffee.

But there were other requirements Pete wanted to meet; in founding Octeine, he wanted to create a space with clear environmental and sustainable goals.

Octeine sources the majority of its green coffee beans from Latorre & Dutch, a Sydney supplier with a Port Adelaide warehouse, who, he says, are “highly traceable, ethically sourced.”

“I think if you’re not doing that in coffee now, you shouldn’t be in coffee,” he says. “It’s really important to understand where your coffee comes from.”

Pete also set up the café with a range of in-house green initiatives. 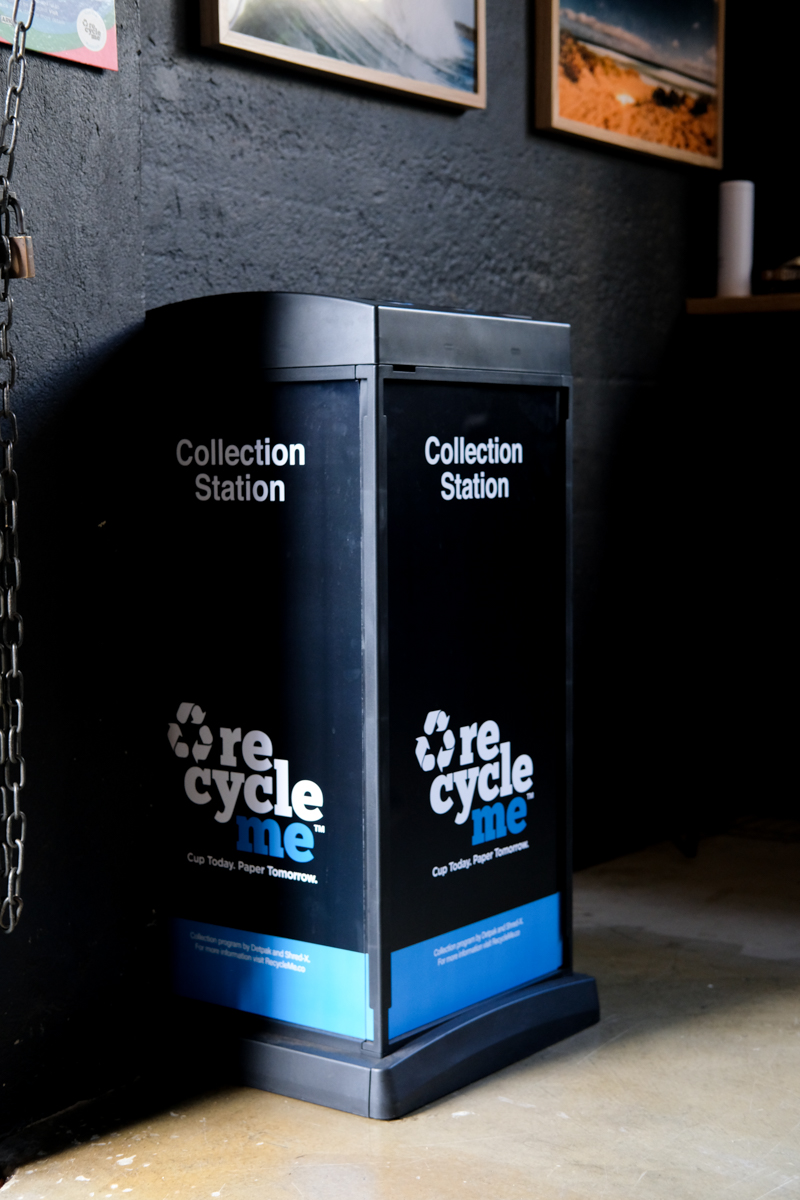 Octeine offers discounts for customers who bring in their own takeaway reusable coffee cups, reusable straws (also available for sale in store), and the café has also signed up to Trashless Takeaway, a site that lists cafés that allow BYO containers for takeaway food.

Pete collaborated with paper and cardboard packaging manufacturer Detpak to incorporate its RecycleMe system in the shop, where Octeine’s coffee cups and lids can be discarded into the on-site RecycleMe bin. Through the system, all the paper used to make the cups is recycled and the plastic lids are upcycled into picture frames.

The Octeine-branded thin white tube has a soft-sealing lid, a one-way valve sticker in its base, and can be brought back and refilled at a discounted price. 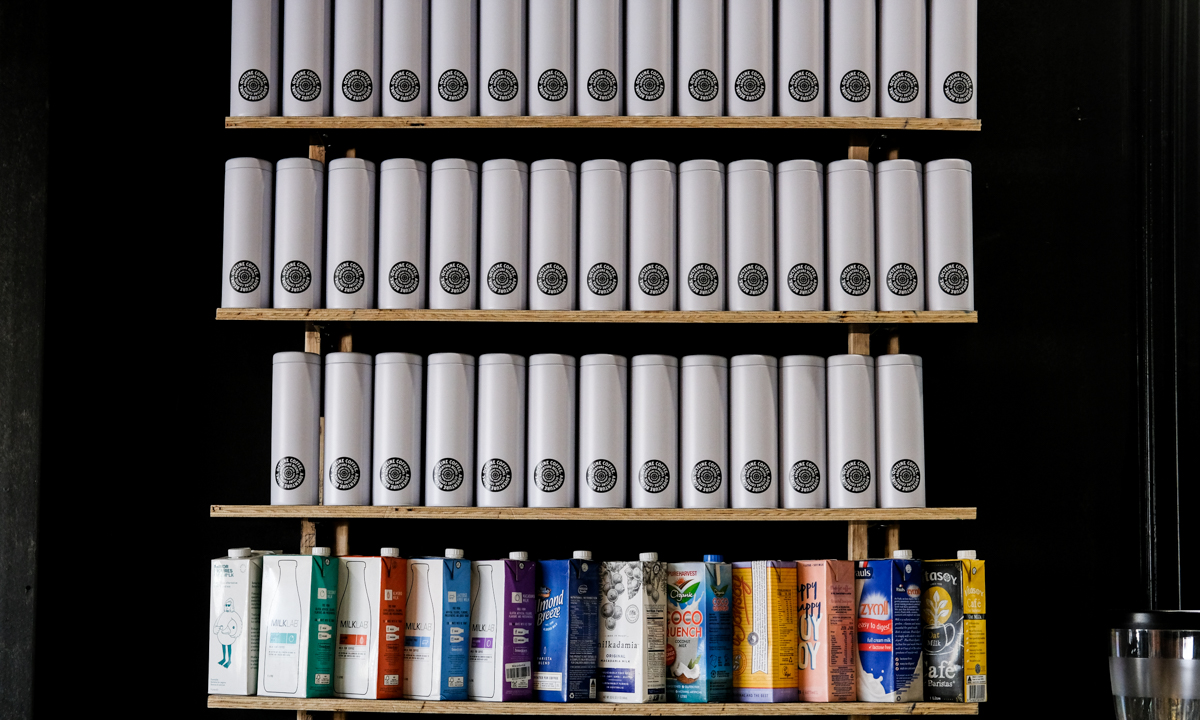 “[This is] the best thing about starting something, right? You can do whatever you want,” he says.

“It throws right back to my geography teaching days, of having that understanding and that knowledge of what we are really doing to our planet. If I can introduce something new, I’d rather introduce it to be as sustainable as possible.

Octeine is still settling into its Kent Town shopfront, but Pete has a long-term goal to open another site that would include a roaster inside the café.

In addition to providing his customers with a convenient way to reduce the ecological damage caused by their morning coffee, Pete hopes to communicate to the public that coffee is an agricultural product – something that is often lost in the many steps between the growing of the coffea plant and the sipping of the flat white.

The information is available in the café in Octeine’s The Book, which sits on every table, but bringing a roaster into the space will solidify the connection, Pete says.

“If you look at Elementary and places like that where the coffee is literally being roasted right there, brewed, served, I think that customer service is a level up from most cafés,” Pete says.

“And that helps people understand that journey that that coffee’s gone on. That’s easier to make those connections. And it’s just something I’d really love to do.”

Octeine is located at 61 King William Street, Kent Town, and opens from 7am ‘til 2pm Monday to Friday and 8am ‘til 12pm Saturday. 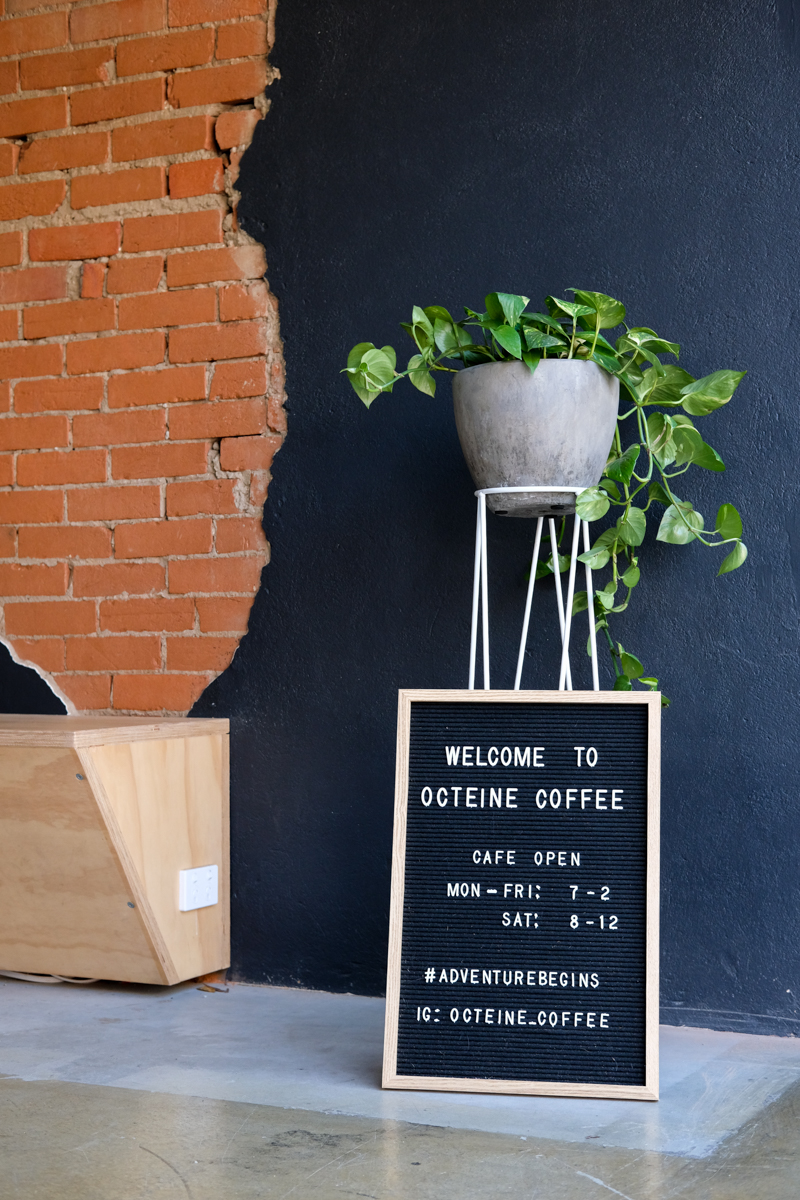