A vegan wine tour for the ethical souse

New World Wine Tour operator Ian Hooper is one of many young aficionados who want their carafes filled with wine made with environmentally friendly, animal-product-free practices.

Like a proud dad, Ian wanted to show this to tourists, and to the world.

New World Wine Tour Co
The vegan tour includes transport, tastings and a vegan degustation
$350 per person for a couples experience; approx. $299 for groups of four to six people
Enquire within.

The company runs tours through the Vale, each with a particular point of view – be it a beginner’s guide to the world of wine; a deep-dive into production, from vine to wineglass; or a specialised look at vegan wine producers of the region.

As someone who doesn’t consume animal products himself, Ian tells CityMag the idea for the vegan wine tour was born from a point of pride: McLaren Vale is championing wine production methods that don’t hurt animals or the environment.

But, for some reason, this fact is not widely celebrated.

“The region’s whole focus is on sustainability, and vegan-wise, I would probably say 50 per cent [is vegan], if not more. All it really is is just using a different product for fining and filtration.

“But there are some companies that won’t even advertise [it’s vegan] on their labelling. It’s interesting because there is an emerging younger demographic who is concerned about what we consume and how we consume it, who would jump on that label.”

When making wine, animal products such as egg whites, a milk protein called casein, and gelatine are often used in the fining or clarification process. Isinglass, a product made from the swim bladder of fish, can also do the job.

But Ian thinks these methods are “archaic” and “outdated”, as contemporary materials like bentonite clay and plastic polymers can filter the wine just as effectively. They also don’t exclude potential customers.

“I am also a young tour operator, and part of a new and emerging consumer-base that can decide on what the future of this industry looks like. I want to be a part of that,” he says.

South Australia produces almost half Australia’s wine, and McLaren Vale is one of our state’s best-known wine regions. It’s got a great Mediterranean climate – warm weather and no humidity.

The area is also leading the charge in sustainable practices, and has been doing so for decades.

McLaren Vale became the country’s first wine region to self-impose restrictions on how much water is sourced from the underground in the 1990s. Decades on, the Willunga Basin Water Scheme now pumps recycled wastewater from a treatment plant onto a sizeable chunk of the region’s more than 160 vineyards.

Gemtree Wines prides itself on its certified organic biodynamic vineyards and uses solar systems to power its winery and cellar door. It also spent two decades planting 50,000 native trees and shrubs on an adjacent plot of land.

Another of the area’s longest-standing wineries, Kay Brothers hasn’t used pesticides on any of its vineyards for two decades. The winery partly credits this to the low levels of humidity, which reduced disease and the need for spraying. 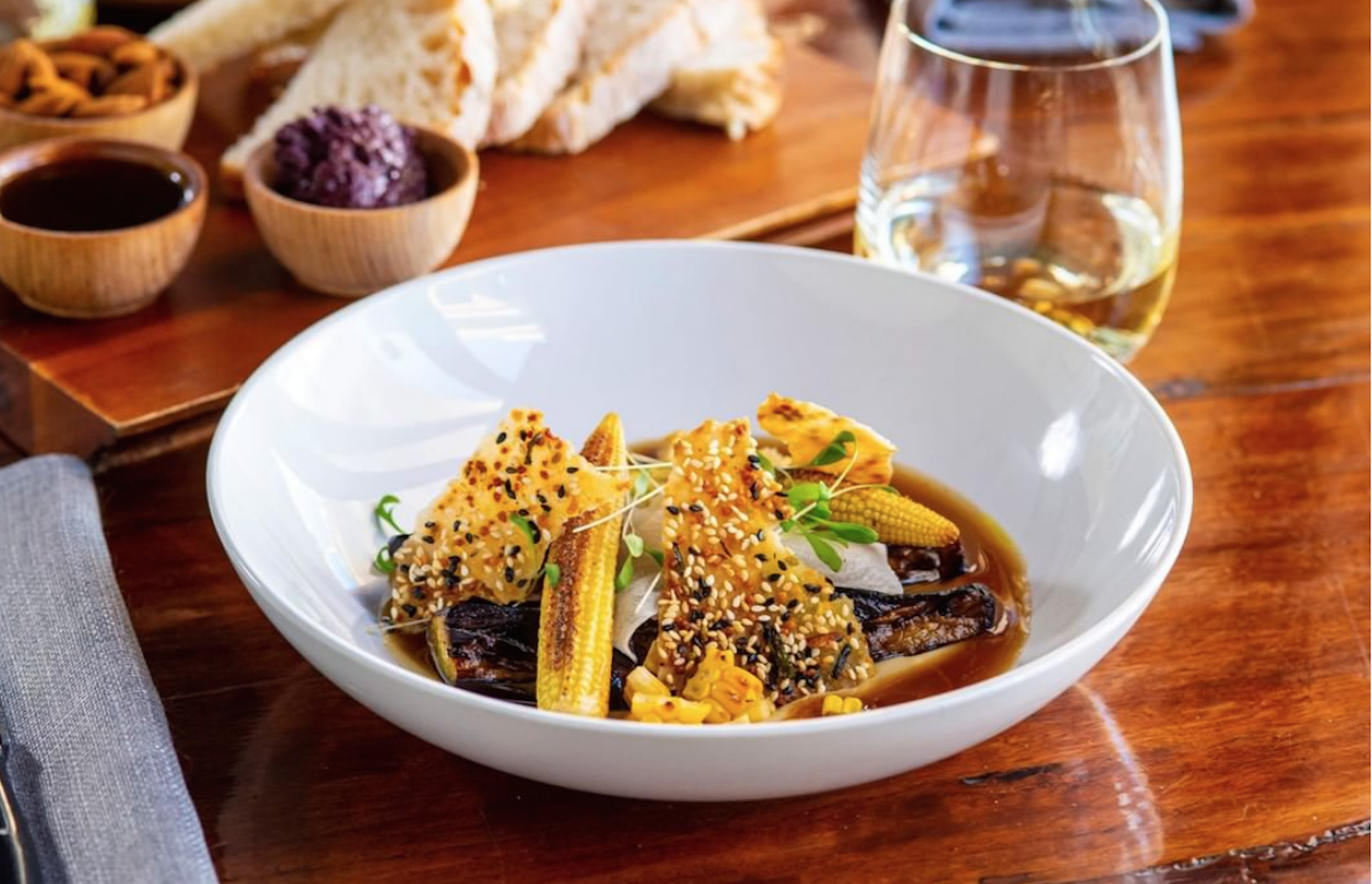 One of the many plates of the Verandahs vegan degustation

New World Wine Tour’s vegan edition will be customised to you, whether you like red or white wines, and will visit up to four wineries, such as Alpha Box & Dice, Oliver’s Taranga and d’Arenberg, and will culminate in a dining experience with an emphasis on locally grown produce.

Ian believes vegans shouldn’t be relegated to feasting on bowls of chips when eating out, so an eight or nine-course vegan degustation at d’Arry’s Verandah Restaurant is on the cards for his vegan wine tour.

“Just because you’re making these decisions, it doesn’t mean you can’t enjoy things to the fullest,” Ian says.

“Vegans are doing so much for the environment and world, and it only seems fitting to create an experience that helps champion and celebrate that – rather than their diets being considered burdensome or an afterthought.”