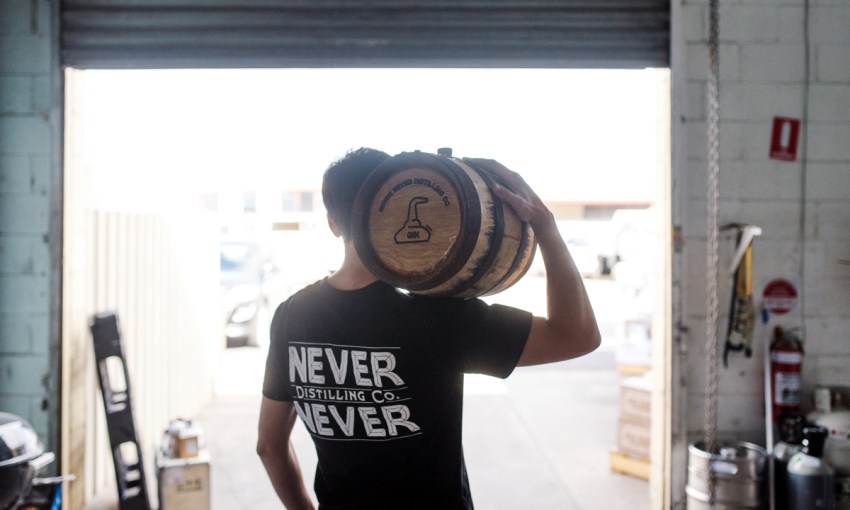 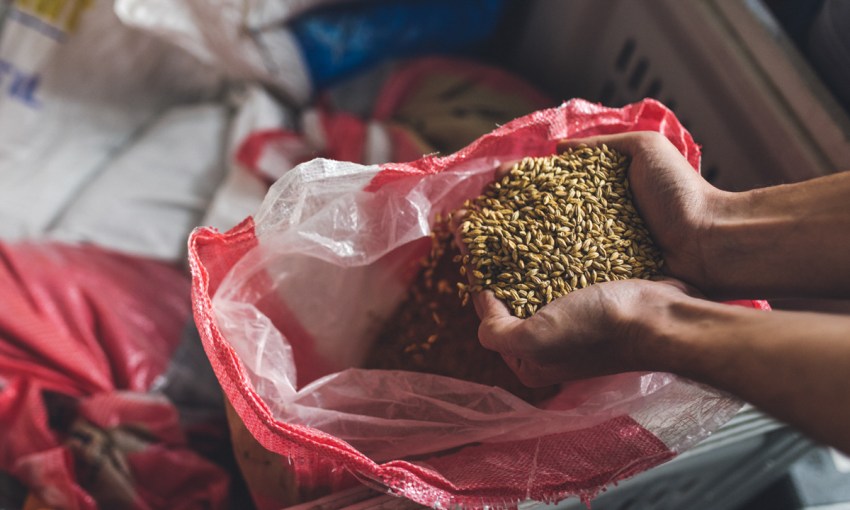 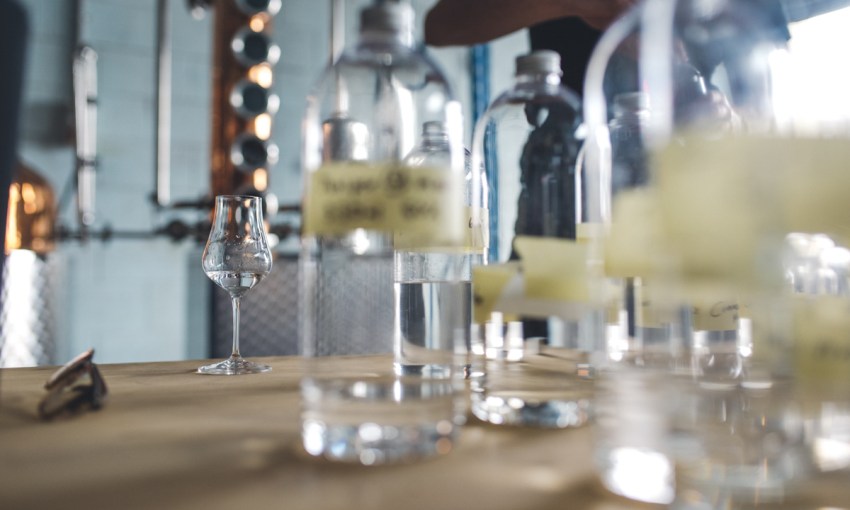 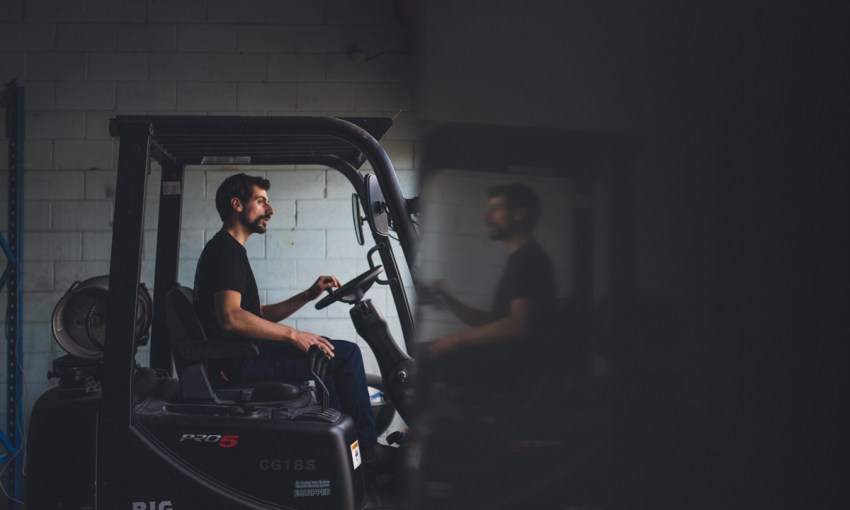 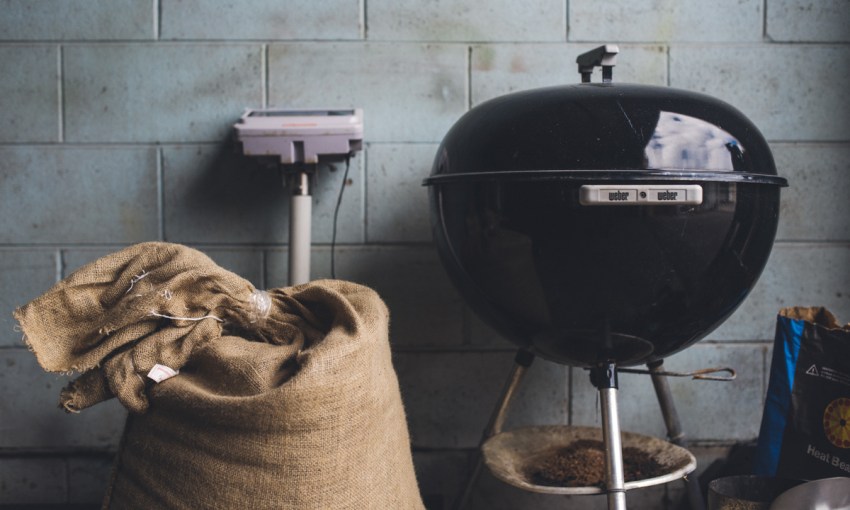 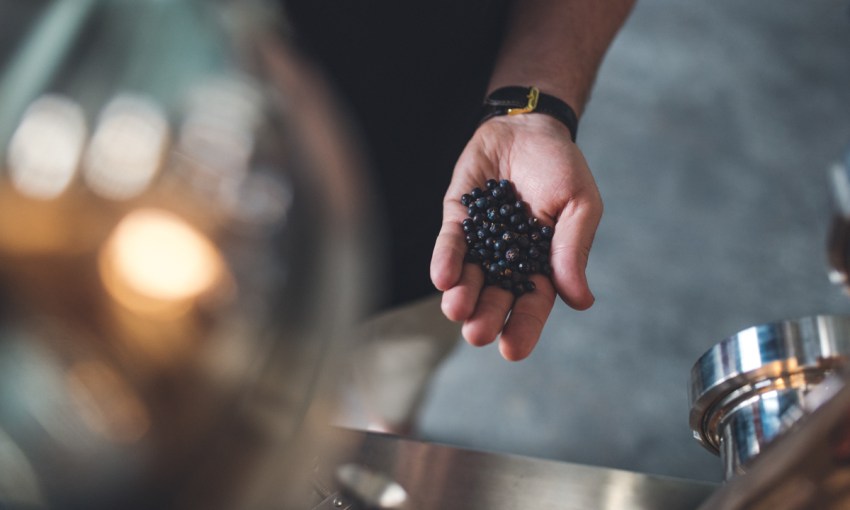 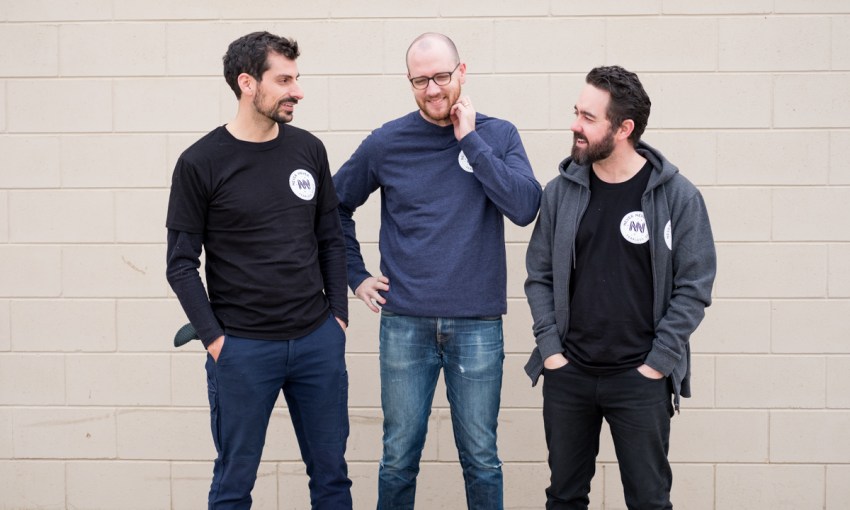 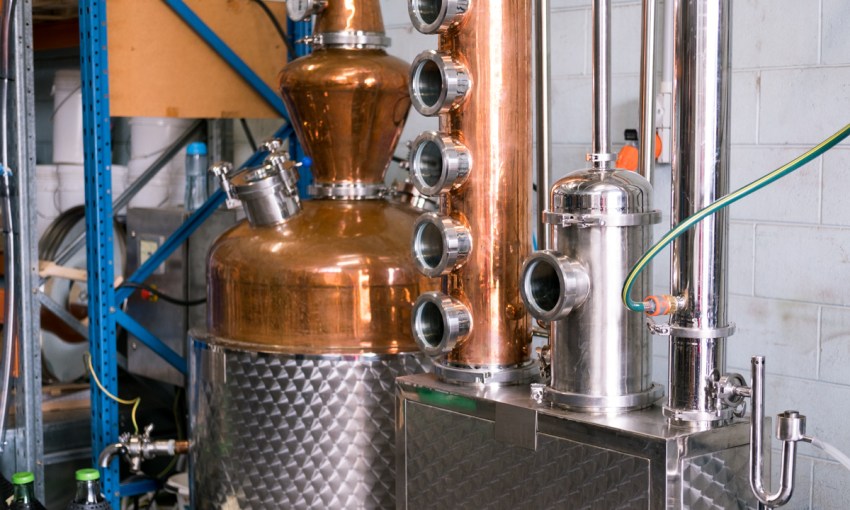 George Georgiadis, Sean Baxter, and Tim Boast come from different lives, but a common love of spirits has drawn them together.

Sean has spent his life working in bars – either mixing spirits, or acting as an ambassador for some of the world’s biggest brands. Tim and George come from finance, but both have long histories with booze – Tim as a collector of bad gins and an ardent home brewer, and George as a frequent visitor to international distilleries who has slowly come to own an enormous array of obscure spirits.

Never Never Distilling Co. will officially launch 7.30pm, August 6 at Hains & Co. The gin will be released soon – we’ll let you know when and where you can try it, and some whisky previews are scheduled for release in about a year (although it won’t yet officially be considered whisky at that point). Proper whisky releases are still some years away.

While the three aren’t all Adelaide originals – Tim moved here from Queensland as a kid and Sean arrived from Sydney in February this year – it’s here they have decided to found Never Never Distilling Co. together.

The decision to turn a love of spirits into a business was a result of their respective passions for the field, and Never Never’s first public test came at Sean’s wedding.

“I had the grand idea of creating a gin for the express purpose of satisfying my wedding guests who happen to be a multitude of Australia’s best bartenders,” says Sean.

“So I thought what better pressure to put on these two than to have our very first release being drunk by all the best hospo people?”

The wedding gin went down well, and now, in the small space they have leased on Big Shed Brewing Concern’s premises, the trio are slowly building up inventory for their first commercial release. 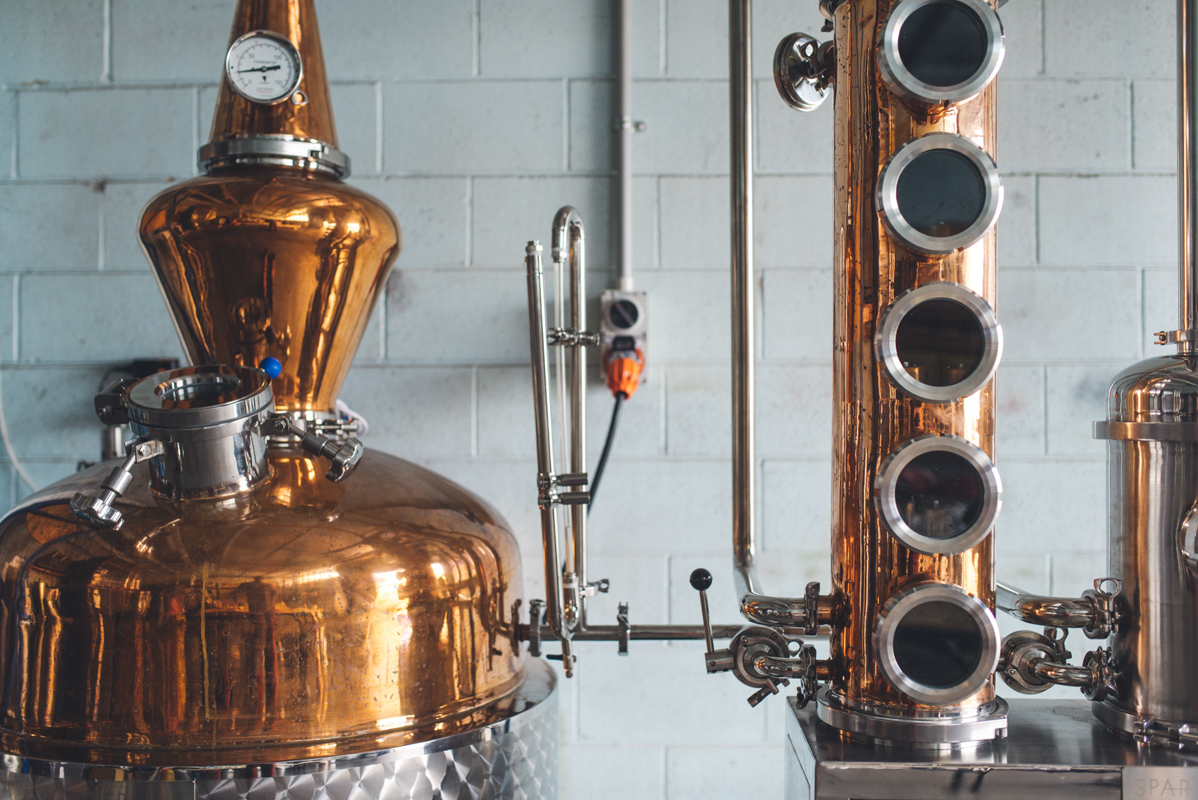 In their 300L pot still, which is known as Wendy and was designed and built by Spark Brew in Melbourne, George, Tim, and Sean have created a juniper-driven gin that harks back to the spirit’s roots.

“We’ve taken a really systematic approach,” says George. “Over the course of about four months we basically made about 45 distillates of individual botanicals – so this one is cinnamon myrtle, for example.”

But in that process, the guys found themselves more and more drawn to the idea that their first gin should be a little more classical. The botanical they enjoyed the most was the one that makes a gin a gin – juniper.

“When we realised we wanted to make juniper the hero,” says Sean, “we did look at lots of natives because our brand is steeped in Australiana and we wanted to be still connected to that. But we found when you use a lot of juniper, it tends to dominate the palate.

“But we landed on one particularly that did stand up with the juniper, and that’s pepperberry.”

Using nine botanicals, the Never Never gin – even while it is influenced by classic styles like Gordon’s – is still more flavour intensive than the mass market brands that are designed to satisfy a broad audience. The guys say it will be just right for a gin and tonic with a slice of lemon, a negroni offset with a cinnamon quill instead of an orange twist, or in a martini or gibson.

The first gin release is set to come to market in July, but the other Never Never product line – whisky, which must age for at least two years – is still, of course, a ways away. 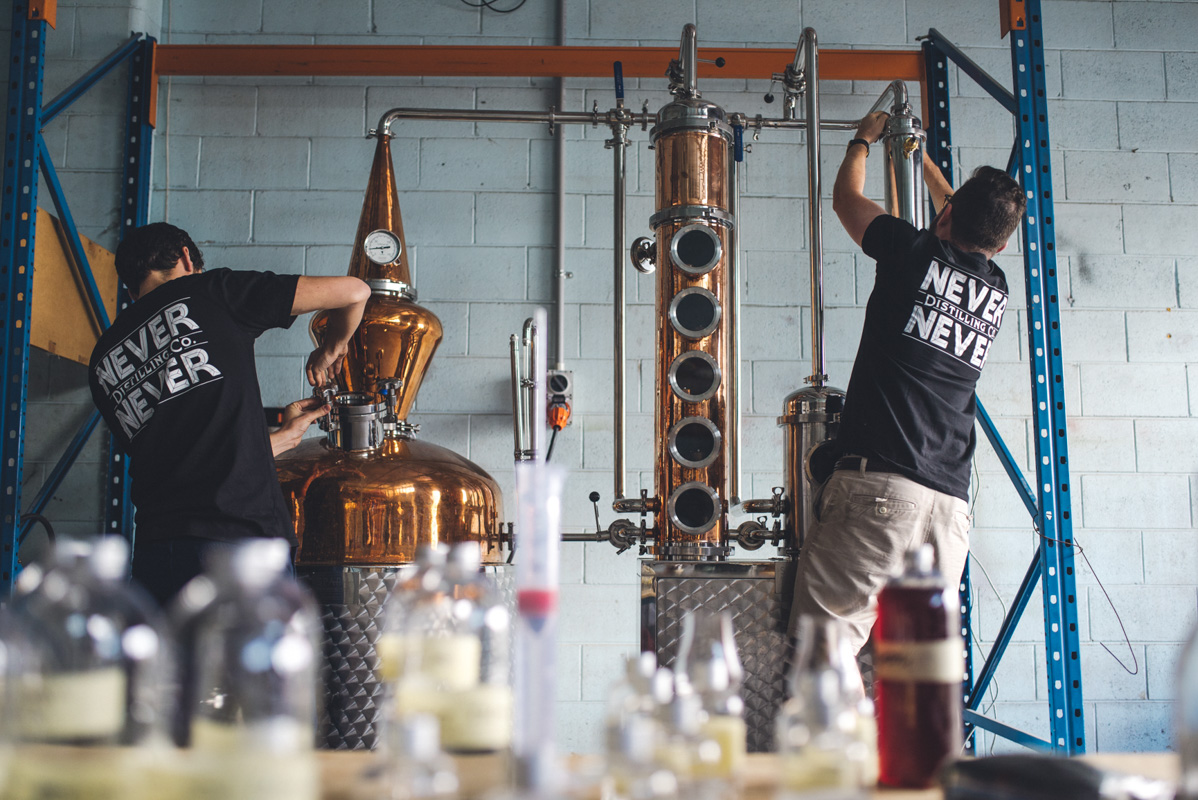 But already, George, Tim, and Sean are developing the ideas that will underpin their whisky. And unlike the gin, it is moving in a progressive direction.

“Being alongside a brewery means we will really get to go to town on all of their specialty malts, and benefit from all that great craft brewing passion that we share in taking a product and seeing what can be done with it in a very experimental way.”

“There’s a fine balance to be found between experimentation and quality and also something that is quintessentially whisky,” adds George.

“In craft beer world they’re making anything you can imagine. Whereas whisky, we’ll still make whisky within the boundaries of what whisky is but with some inspiration on specialty malt, interesting maturation, interesting fermentation.”

Both the whisky and gin will largely be sold direct to bars. And with an official launch scheduled for August 6 at Hains & Co, it won’t be long before we can taste George, Tim, and Sean’s carefully crafted spirit in an equally carefully crafted drink.