Chef Justin Dingle-Garciyya has been drafted as the founding chef of Garçon Bleu, a modernised French restaurant launching on level nine of the Sofitel Adelaide.

When assessing a move to a new city, it doesn’t take much to please chef Justin Dingle-Garciyya.

Having worked in the kitchens of food-led hotel concepts around the world – including for the Morgans Hotel Group, W Hotels, Aman Resorts and Six Senses Resorts – he’s come to appreciate that only a few key elements are necessary in order to feel at home.

“They’re the type of things that attract me to go and live in a place. And you know, beautiful beaches.”

Justin has been in the state for just over a month, recently moving seaside at Grange. He was brought here by the Sofitel group to head up Garçon Bleu, the French restaurant slated to launch on level nine of the Currie Street hotel development on Thursday, 4 November.

While Justin’s interest in the project was piqued in a similarly laidback way (“Forever, my favourite designer has been Comme des Garçons,” he grins), the chef is a natural fit for the project, having been classically French trained under Raymond Blanc at the two-Michelin-starred La Manoir aux Quat’Saisons in Oxford.

The brief for the restaurant was “basically a French brasserie on steroids,” Justin says, with the chef now in the process of designing a menu which pays respect to traditional French cooking, but with “modern variation of flavours and tastes”.

These “modern variations” come through Justin’s philosophical commitment to sustainability in his kitchens – particularly in his preference for local ingredients over importing what may be considered more authentic options.

“I think maybe 15, 20 years ago, I probably would have got laughed at, and it was just all about the product and all about getting the duck from France air-freighted, or the caviar and the truffles form Europe or whatever,” Justin says.

This is a thread sewn throughout Justin’s career. The chef says he has a history of pushing plant-based options on his menus, and has worked with his kitchen teams to minimise the use of single-use plastic items, like cling film and straws.

And he has often worked closely with local producers to encourage farming practices that match his culinary ethos, such as line fishing in Bali and responsible poultry farming in the Bahamas.

Having only been in South Australia for six weeks, two of which he spent in quarantine, Justin is still getting to know the local food industry.

The Garçon Bleu concept, he says, will allow him to pay respect to local produce.

“You’ve got stuff that you really don’t have to do much to, like the Streaky Bay lobsters and oysters and those foods, but you’re just enhancing the product,” he says.

“And then [we’ll be] making it more contemporary in the fact that you don’t want to come in and have your truffled hollandaise or bearnaise and your steak pommes frites and be feeling like you want to be having a heart attack at the end of it. That’s just one part of French cuisine, you know?

“[You’ll] come in here and feel the Ayurvedic part of it, feel the health part of it, know that what you’re eating, where it’s been farmed, and know that it’s actually good for you.”

The wine program comes from sommelier Trevor Maskell, formerly of Mother Vine, and will feature French and local wines, with a connection drawn between comparable wine regions of the two countries. 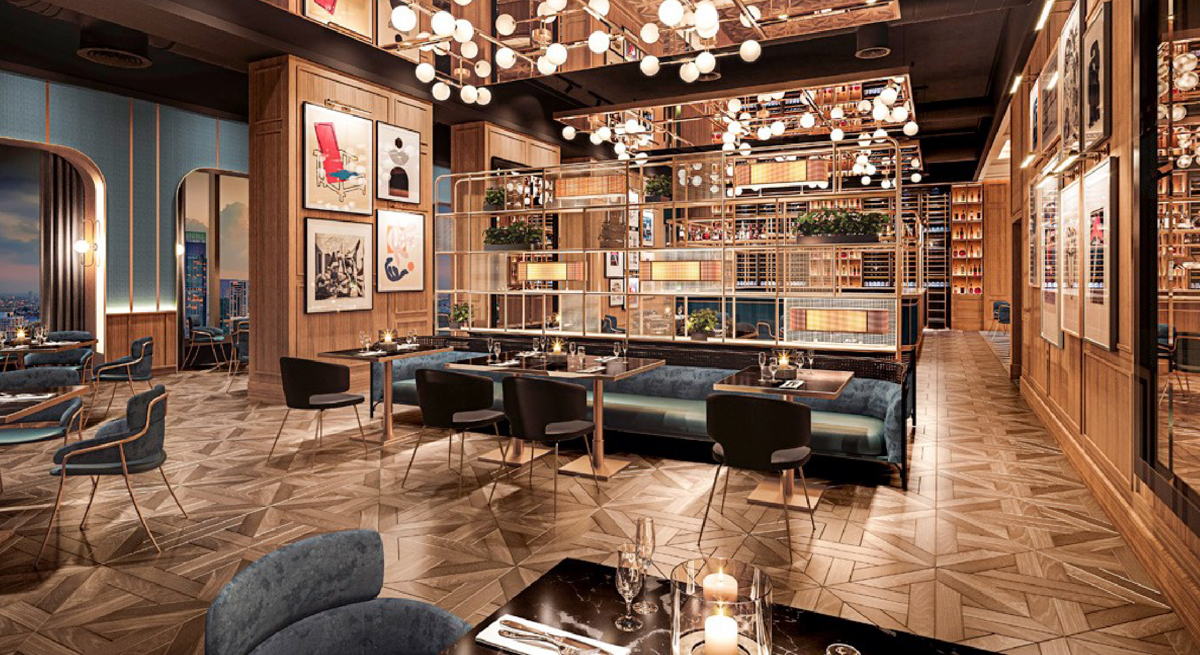 A render of the Garçon Bleu fit out. This image: Supplied

Although the restaurant’s design, created by Carl Almeida of P49DEESIGN, promises to be no less than opulent, Justin hopes his diners feel as though “they’ve come into our house”.

“With every plate we put out there, we’re putting out our passion, our love, our signature of what we love to do, you know?” he says.

“It’s just not a job. For every single one of the guys working in this kitchen, it’s a lifestyle, it’s a passion, it’s creativity.”

Garçon Bleu’s Food and Beverage Manager, Alistair Holden, who has worked previously at Sean’s Kitchen and The Currant Shed, agrees that the main job for his front-of-house team is to keep diners comfortable.

“I think it’s a fine art, being able to read a guest and give them a level of service they require – whether you might be leaning up against a post and having a bit of a chat with somebody, or whether it’s hand behind the back and serving wine.

“It’s giving the staff the comfort that, when they have tables in their section, that it’s almost like it’s their kitchen and you’ve got friends over.”

Although there’s still a bit of construction going on out the front of the Sofitel Adelaide, all members of the team CityMag spoke to are confident they’ll hit their 4 November open date.