In her parent’s Chinatown restaurant, Tangritah Uyghur Restaurant, Marhaba Salay serves plates of handmade dumplings and lamb kebabs. Outside the eatery, she is campaigning for her sister's freedom from a Chinese re-education camp. 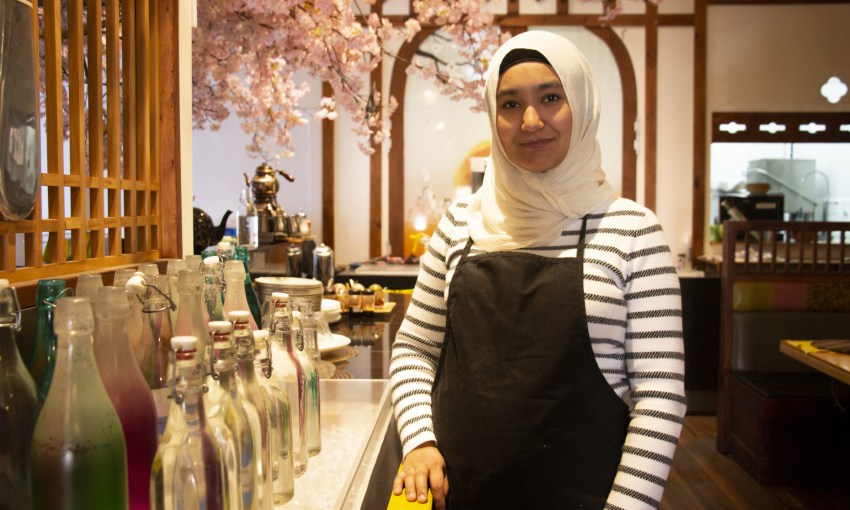 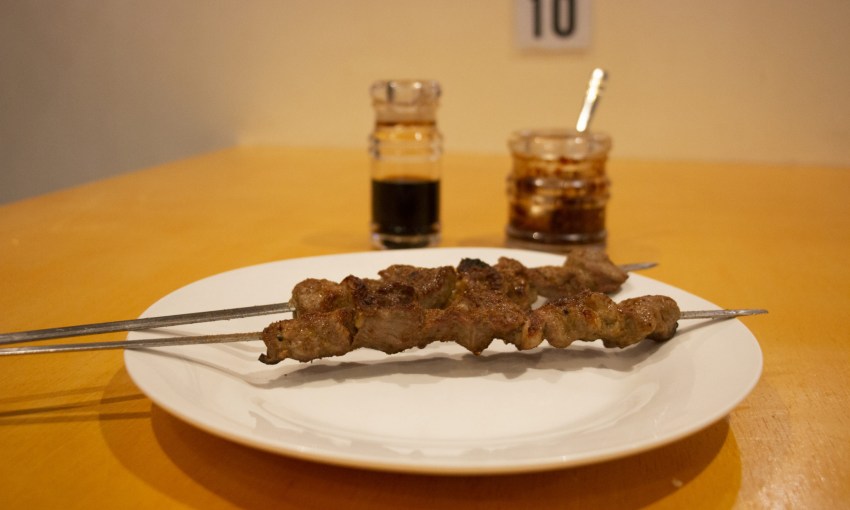 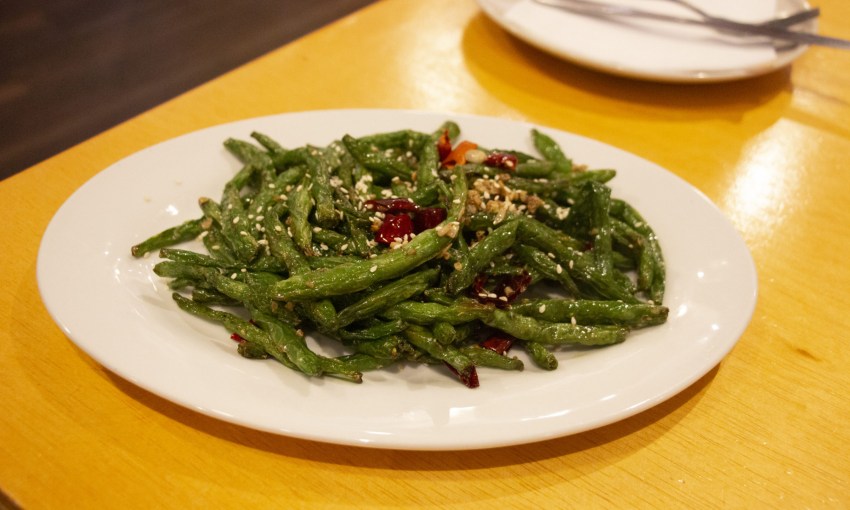 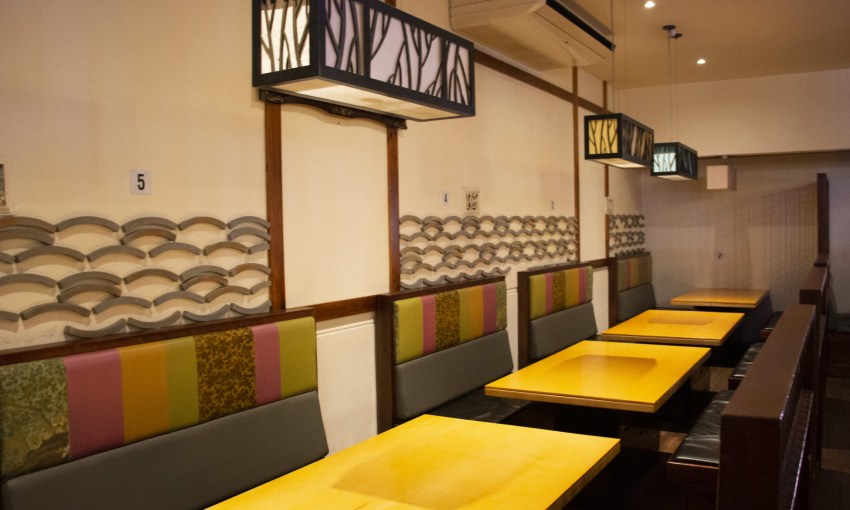 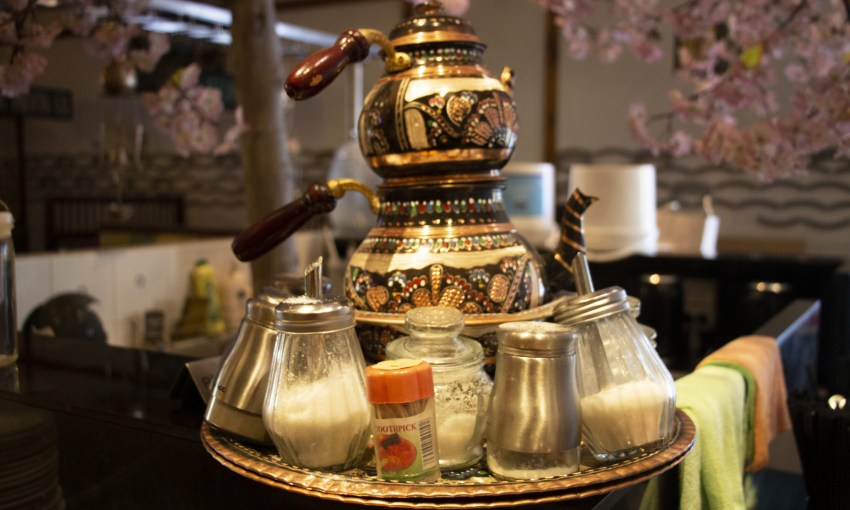 When Marhaba was a young student in her hometown of Ghulja – a city located in China’s northwest Xinjiang autonomous region – she was told to remove her hijab.

If she didn’t remove the Islamic headscarf, she couldn’t enter the Chinese school, she tells CityMag.

This is Marhaba’s earliest memory of discrimination, and, in her eyes, religious persecution.

“We are from Xinjiang. It’s [been] illegally occupied by Chinese government since 1949,” Marhaba says.

“Chinese government detained between one and two million Uyghurs in the concentration camps, so this is what we are suffering at the moment. Some people [are] even in the prison, including my own sister.”

Marhaba started working in her parent’s Tangritah Uyghur Restaurant on Grote Street two weeks after she immigrated to Adelaide in 2011.

Her mother, Bahar Mamtimin, and father, Yakub Sabir, opened the restaurant in 2010, after moving to Adelaide three years prior.

The whole family identifies as Uyghur, a Turkic-speaking Muslim ethnic minority. The dishes plated at their restaurant come from their home country.

The heavily-bearded Yakub can sometimes be found fanning charcoal kebabs on a barbecue out front, luring patrons inside. But more commonly Marhaba’s parents command the restaurant’s large industrial kitchen from within, often instructing Marhaba on the floor, through a long service window, in their mother tongue.

Marhaba defines her role at Tangritah Uyghur Restaurant as an all-rounder. Visiting the eatery on a Tuesday afternoon, CityMag sees her carrying plates of glazed chicken skewers and handmade noodles to patrons in seated booths. 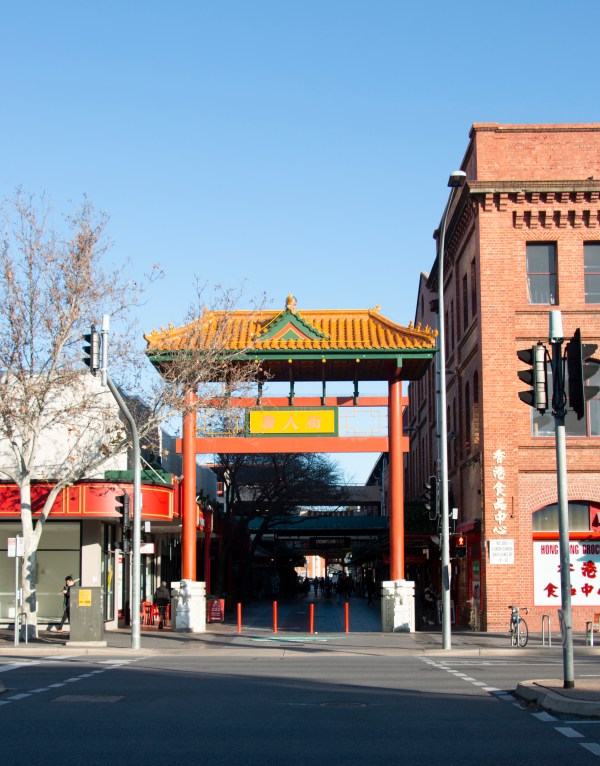 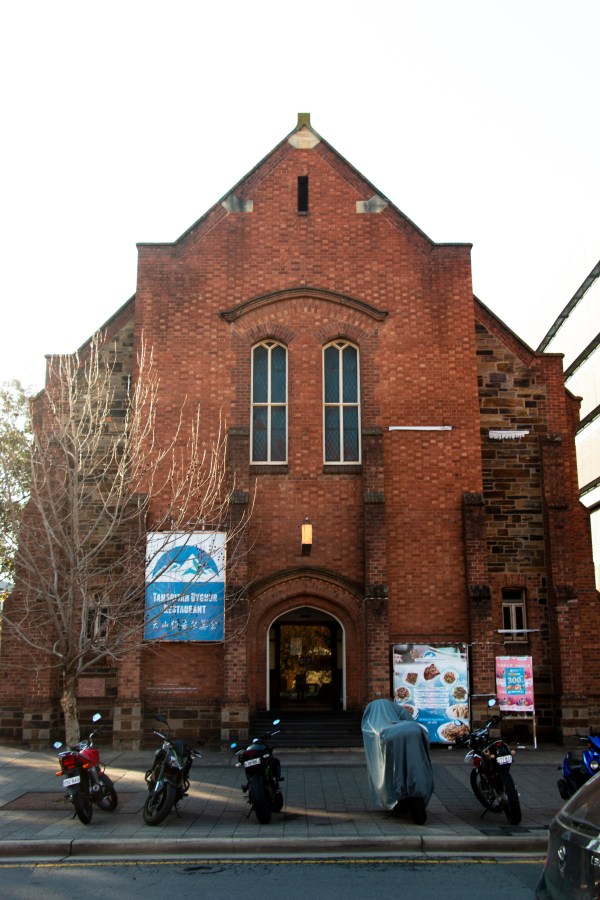 Above: The Tangritah Uyghur Restaurant on the cusp of Chinatown; Right: The landmark the restaurant’s patrons see when they leave

Uyghur cuisine is characterised for its predilection for pepper, Marhaba says, now sitting across from us, adjusting her headscarf.

Not just black pepper, there’s also an emphasis on red and white, too. Ginger, “a lot of salt”, and cumin are also big players.

“Cumin is really important for our skewers,” Marhaba says.

“And it can be spicy, but it depends on what people want.”

Meat, especially lamb, is a dominant ingredient of Uyghur cooking. The meat must be halal, meaning it’s prepared in adherence with Islamic practices.

“We do skewers, like barbecue, lamb skewers, chicken and ribs, chops [and] things like that. Except we are really good at making handmade noodles,” Marhaba says.

“We are good at dumplings too. They are [also] very popular.”

Uyghur cooking is complex and something learnt when growing up, Marhaba says, and so passing the deeply instilled knowledge on to someone who grew up outside of the Uyghur culture can be difficult.

“That’s why we work most of [the] time by ourselves,” she laughs. 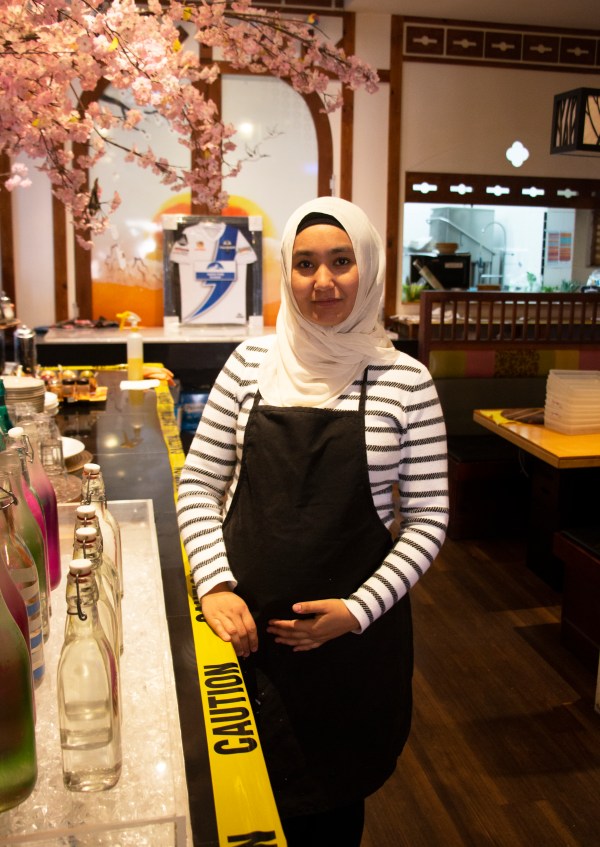 Above: Bahar Mamtimin rolling out dumpling skins; Right: Marhaba says the restaurant’s food is made with love

During our interview, Marhaba oscillates between smiling and striking a more somber tone. At times, her eyes glisten.

Marhaba was 19 when she started the paperwork to migrate to Australia. She says she didn’t leave Ghulja because she was unhappy, but because her parents had suffered the loss of a son and wanted family close in Australia – a country where they did not speak the dominant language.

Three years and thousands of dollars later, Marhaba successfully immigrated to Adelaide, the city she now calls her “second home.”

A decade ago, “everything was much better [in Ghulja] than now,” Marhaba says.

“But now my sister’s in danger. I’m just trying my best to rescue her.”

Marhaba’s sister was detained by the People’s Republic of China in one of these “transformation-through-education” facilities, widely understood to be an internment camp.

Mahira Yakub, a Uyghur who worked in an insurance company, was indicted for “giving material support to terrorist activity” in January 2020 for transferring money to her parents in Australia. According to her sister, the money was transferred in June and July 2013 to help her parents buy a house. Mahira Yakub’s aunt and uncle have also been indicted on the same charges and are currently released on bail. Detained since April 2019, and without access to family and legal representation, there are grave concerns for Mahira Yakub’s condition and wellbeing, especially as she suffered from liver damage during a previous detention.

“DFAT (Department of Foreign Affairs and Trade) contacted the Chinese Embassy in Canberra and then they told DFAT my sister was arrested in May 2019,” Marhaba says.

“All she has done is to send money to us in 2013, by Bank of China to Commonwealth Bank, to my parents, and to my bank account, to buy a house in Adelaide.

“We just try to save her and we are not terrorists. We have nothing to do with terrorism. We are just simply living.”

Marhaba is especially concerned about her sister’s condition given the health complications that came from Mayila’s previous 10-month detainment in 2018, which led to liver damage.

“The Chinese government didn’t give us any reason [for her detainment],” she says.

“After her release from [the] camp she was diagnosed with liver damage.

“She was a very healthy and fit lady before she was forced to join concentration there, but just in 10 months she was diagnosed with liver damage.” 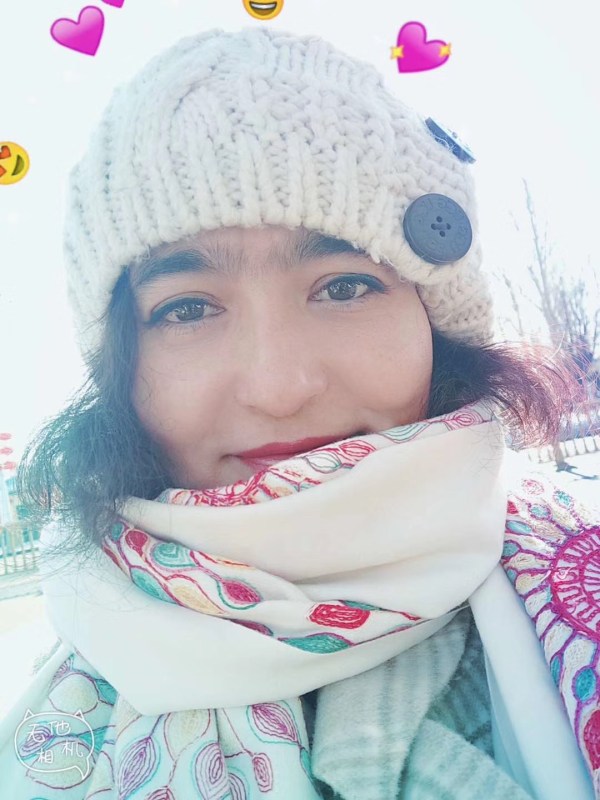 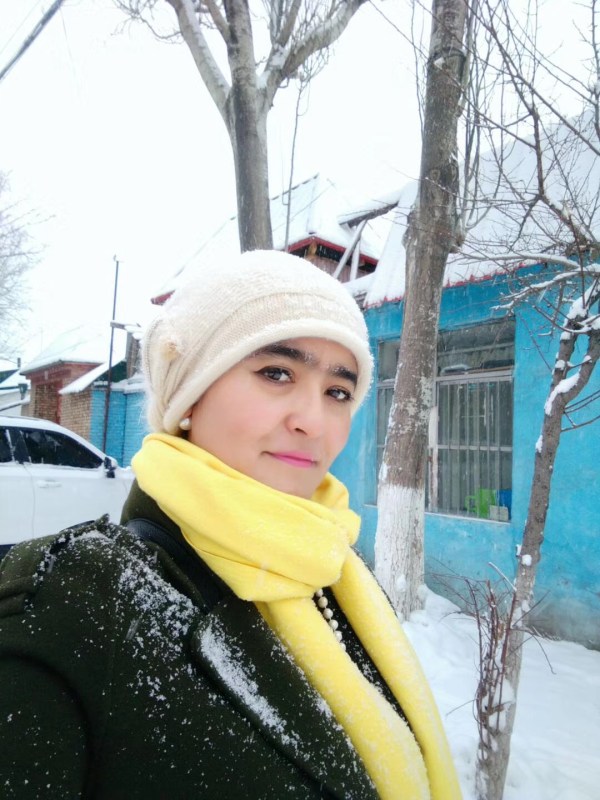 The Chinese government has refuted claims it is breaching human rights in these camps, arguing they are “like boarding schools” and the mostly Uyghur population within them are participating in vocational training programs designed to equip them with skills necessary to assimilate into the Chinese workforce.

But a campaign of pregnancy checks, forced birth control, sterilisation and abortions in Xinjiang have also led some experts to believe there’s a “demographic genocide” taking place in China.

Even outside these camps, a Uyghur’s life is oppressed, Marhaba says.

In 2017, the Chinese government prohibited the growth of “abnormally” long beards and wearing a veil in Xinjiang, the BBC reports.

Marhaba believes her sister, a former insurance company employee, has been detained in a camp, where Uyghurs are “abused, tortured… and killed”.

She has asked the Australian government to investigate her sister’s case and clear her family of terrorism so her Mayila can be freed.

Thousands of kilometres away from her sister, Marhaba finds moments of joy with her family, running the floor at Tangritah and watching as her daughter, Nora, starts to absorb the Uyghur food culture just as Marhaba did.

“With my daughter, we peel the vegetables here and then she just want to come and help,” she says.

“If people like our friends, and family friends, ask her, ‘What are you gonna be when you grow up in the future?’ She says ‘Chef!’”

Speaking about her daughter is the moment we catch the brightest smile from Marhaba, but it is difficult to think about the future.

While she waits for help from the Australin government, Marhaba is helping coordinate an Amnesty International petition to spread awareness of her sister’s situation and the plight of other Uyghurs.

“We have a big pain in our heart. My sister and my Uyghur people, all are suffering from the Chinese government,” she says.