Let’s Be Frank is now open in BRKLYN

A new food concept has come into the Renew Adelaide pop-up space inside BRKLYN on Rundle Street – hot dog hawkers Let’s Be Frank.

This is a new offering from the same crew who’ve brought you Nugg Lyf, Emily Lorimar and Josh O’Shaughnessy, AKA the fried chicken fanatics who also recently held Cluck Yeah Fried Chicken Festival at the Morphettville Racecourse.

The Let’s Be Frank concept came to the duo as a riff on the Brooklyn theme, with Emily taking inspiration from a stint spent living in New York above a hot dog shop in the West Village.

“We love hot dogs, we love pretzels – we couldn’t do pretzels, we’re not bakers,” Emily laughs, her love for the foodstuff confirmed as we catch a glimpse of a pretzel tattoo on her inner forearm.

Let’s Be Frank’s range of hot dogs brings together the flavours traditionally associated with New York hot dogs, with a few tweaks for the local palate.

“I don’t think we have a big hot dog culture here in SA,” Emily says.

“So having brioche – we use them [at Nugg Lyf] in our burgers too, and they tend to be a hit, just having them slightly toasted so they’re warm.”

There are five variations on the theme, the least NY-authentic of which has been the most popular, Emily laughs, called the Canarsie Dog, with adds bacon bits, smoked cheese, ketchup and mustard to the Chapman’s Ol’ Smokey Franks dog.

The Dumbo Dog is the standard issue dog, pickle, ketchup and mustard, there is the Bushwick with sauerkraut, the Bed-Stuy with jalapeños and sriracha, and there is also a vegan option, similar to the Dumbo Dog, made with a Lamyong vegan dog and a vegan bread roll instead of brioche.

Another favourite that has emerged in Let’s Be Frank’s first week of trading inside BRKLYN are the egg rolls – six fried mini franks wrapped in wonton pastry.

“After a few beers, they go down really well,” Emily says.

There are also desserts available: cheesecakes and ‘crack pie’, made famous (and briefly infamous) by the Momofuku-affiliated bakery Milk Bar.

Let’s Be Frank operates 5:30pm ‘til late from Wednesday to Sunday, and they may also open up on Sundays during festival season. 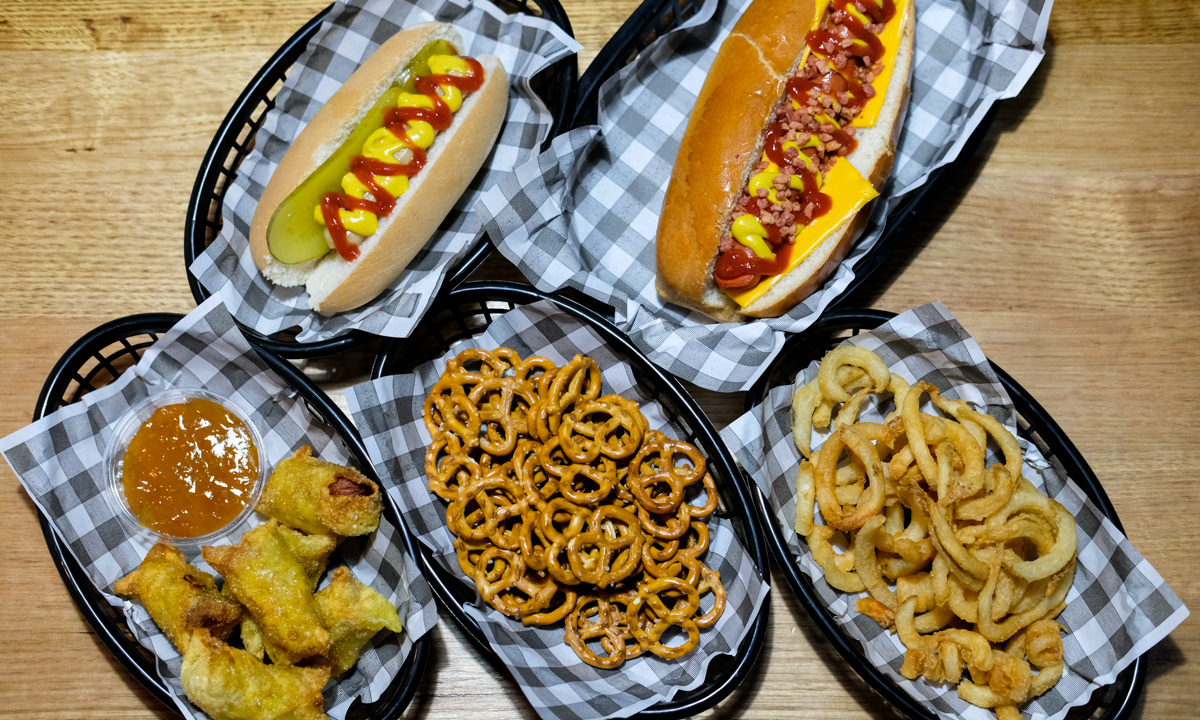 Not pictured: A few beers

The impending influx of revellers into the East End during Fringe was a big draw for Emily and Josh to take on the six-month lease, as well as shared aesthetic ideals with BRKLYN’s owner Rashaad Chenia.

“Even with Nugg Lyf and our other brands, they have that bit of New York, hip-hop affiliation with our branding and messaging, and when we met Rashaad we got along and realised that we had similar aesthetics and ideas. It wouldn’t have worked if all of those pieces hadn’t come together, but it flowed,” Emily says.

With Let’s Be Frank’s opening, 2019 has been an incredible year of growth for the duo. Nugg Lyf has been operating for 18 months, but Emily came on board earlier this year as a business partner to Josh to help expand the enterprise.

Nugg Lyf was founded as a dark kitchen concept, running solely on Uber Eats out of kitchens in pubs Josh has a familial connection to. After initially launching in four pubs, the brand has scaled back to two (the Maid and the Clovercrest), but has since launched into two food trucks, as well as setting up shop within the Brewboys Brewery in Croydon Park.

“Josh met [the Brewboys owners] at Beer & BBQ Festival and got along really well with them,” Emily says.

“We run our Uber Eats from Brewboys, and we’ve also since created a few other brands under Nugg Lyf, because we want to be able to offer burgers, especially being in a brewery, desserts, and we do wings as well. So they are separate brands on Uber Eats, but they all fall under the Nugg Lyf umbrella.”

Once Fringe season passes, Emily and Josh will assess the leasing options, and may look to work with the landlord to amend the kitchen to suit brining in their other concepts.

But for now, grab a hot dog and a beer and enjoy the views from the BRKLYN balcony.