It is a near universal fact of life – everybody loves dumplings.

At Red October, from Tuesday 14 May through ‘til Sunday, 26 May, the Russian restaurant is capitalising on this knowledge, dedicating the talents of their recently acquired chef, Elena Ambrose, to the art of Russian dumplings.

Red October’s dumpling festival runs from Tuesday, 14 May until Sunday, 26 May, with a special menu available every day the bar opens.
On Saturdays and Sundays throughout the festival (18-19 and 25-26 May), chef Elena Ambrose will host dumpling making classes.
Tickets to the classes are available here.

While its regular menu will still be in effect, the whole two weeks of Red October’s Dumpling Festival will see the venue put forward a specialised dumpling menu, featuring pelmeni and chebureki (a larger shallow-fried dumpling) in a variety of sizes and sweet and savoury iterations.

As part of the festival, every Saturday and Sunday (18-19 and 25-26 May) chef Elena will host a dumpling making class that will demonstrate how to make three different types of dumpling.

The idea of having a focussed dumpling event with an educational aspect came to Red October’s co-owner, Marina Tazhdynova, after a recent trip back to Russia.

“My mum took me to some of the cooking classes there. It was a pretty fancy cooking school, she got a voucher and was like ‘Let’s go!’ It was really cool. It was amazing,” she says.

“That gave me the idea that we could do that here as well. Because Elena makes amazing dumplings, she can teach people how to fold it.”

Bringing Elena into the restaurant was a coup for Red October; in an effort to make their Russian fare familiar to the Australian palate, Marina and Roman Tazhdynov (her husband, and co-owner of Red October) had worked with their previous chefs to balance between local and Russian flavours.

In the process, they found they’d lost a lot of the Russian core to the meals.

With Elena, a Russian-born chef familiar with Adelaide’s food scene, they’ve been able to bring an authentic Russian influence back into the menu’s design. 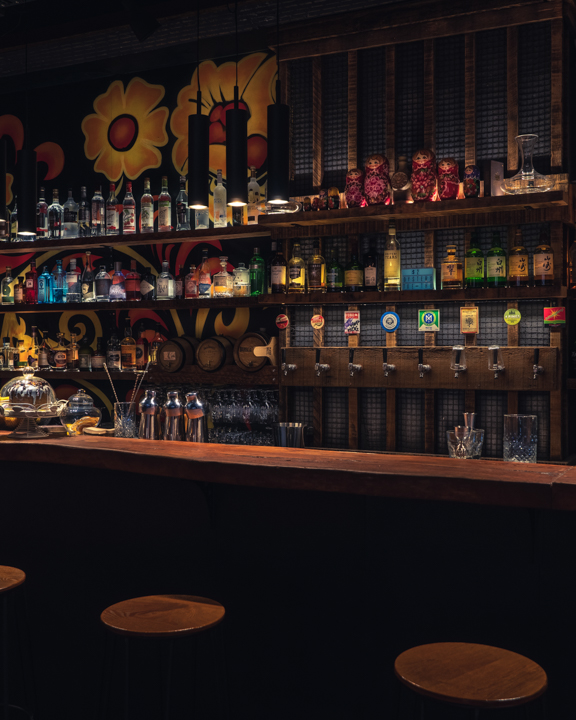 Because of the small amount of Russian food available in Adelaide (hello, First Order), it has also been difficult to sell the food to first-timers who are not familiar with the country’s cuisine.

“It’s a bit easier to bring Russian dumplings to the market, because people actually already have a little bit of understanding about what it is and what it tastes like– everyone loves dumplings!” Marina laughs.

“We’re having something like risotto on the menu, but it will be pearl barley, mushrooms, something else. In Russia, you’d call it kasha. It’s not really risotto, but [that helps people] understand what it is and what you can expect from the dish.

“Once you get people here, they love it. The biggest thing they love, they love personal experience and they like people talking to them and explaining [the food]. Every time when I’m on the floor doing tables, if they’re interested to listen, I’ll tell a story about Russia, I’ll tell some of the background of the dishes. We have quite a few people coming here before they go to Russia.”

Red October’s Russian Dumpling Festival starts on Tuesday, 14 May and runs right through until Sunday, 26 May, and you can purchase tickets to the cooking classes here.