Sure, there are lots of bars in the West End now. But there aren’t any even remotely like Pink Moon Saloon – a whimsical, ski chalet-esque venue conceived by those nice guys from Clever Little Tailor and a couple of their friends. 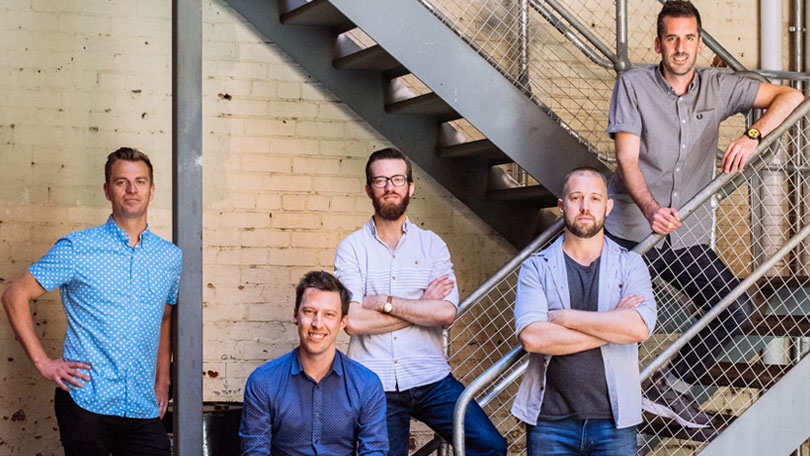 Slated to occupy what is currently a 4m-wide gap between buildings on Leigh Street, Pink Moon Saloon is clearly going to have to achieve something a bit magical just to get constructed.

Designer Matiya Marovic is working with co-owners Marshall King, Crispian Fielke, Josh Baker, Dana Whyte and Matthew Standen to build two A-frame cabins into the unusual space – the front one will act as bar and the second will be a food hall and kitchen.

Inspired by the odd but strangely comforting worlds of Wes Anderson and the inside of their own minds, the new venue aims to be “Adelaide’s biggest tree house for adults”.

“We want to make something different. Nothing is completely unique but we want something distinct,” says Marshall.

Clearly, the two wood-clad huts and the courtyard that sits in between them will be different enough, but the plan is to be extraordinary in service style as well.

“We want to make something different. Nothing is completely unique but we want something distinct.”

Pink Moon will evolve the small bar concept, most markedly by taking the food offering up a notch. The second kitchen hut will include a wood oven and will serve all day – from lunchtime until late into the night.

“It’s ambitious, but we want to do lunch because there’s a paucity of lunch spots in the West End,” says Marshall.

“So, hopefully we can do this quality punchy lunch service. My idea is that since we’re going to be slow cooking a lot of meat in the oven, we can use that meat in pressed sandwiches. You can stick a piece of pork in this oven and walk away and come back the next day and it will be perfect, so you cut it up – and there you go, pint of hop hog and a roast pork sandwich in a nice place.”

Being largely from Clever Little Tailor, the guys aren’t going to let the food outshine the beverage offering. There will be a focus on beer and whisky, with five beer taps pouring a rotating selection and a variety of high end tins in the fridge as well.

Cocktails won’t disappear completely either, but instead of stocking an exhaustive list, the menu will be kept short and seasonal.

“If plums are in season I’ll make something with plums until the plums run out,” says Marshall. “We’ll have a short, three to five drink cocktail list that will be seasonal and fresh and written with the food in mind as well.”

Similarly, the wine list will be tightly curated, and will have some vintages and varietals that will be rarely seen elsewhere.

It’s all very exciting, but of course it’s not built yet. But it should be by late May, so we’ll be keeping a keen eye on the Leigh Street space so that we can be first in line for a sandwich and pint when the doors do open.