i Darts, I love you

Is it the novelty drinks, the gaudy playlists, or the chirping neon electronic dart boards that make i Darts Adelaide such a singularly enjoyable experience? The answer, as reporter Kate Richards discovers, is yes. 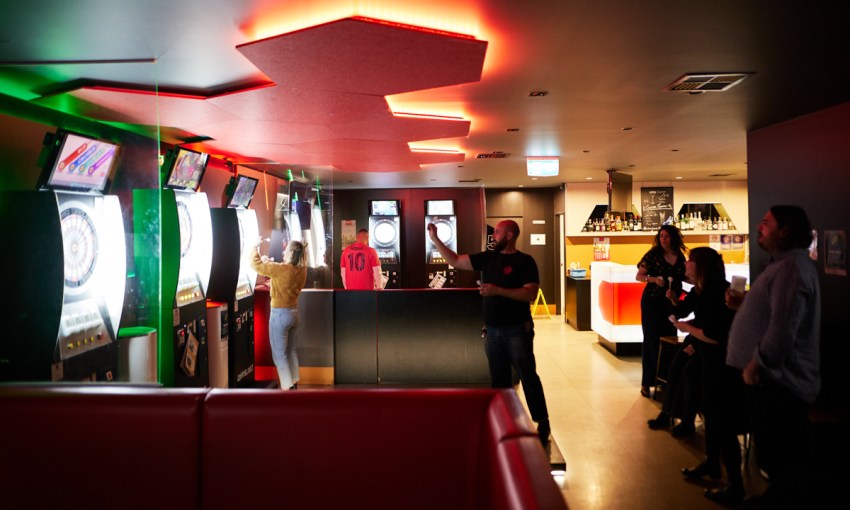 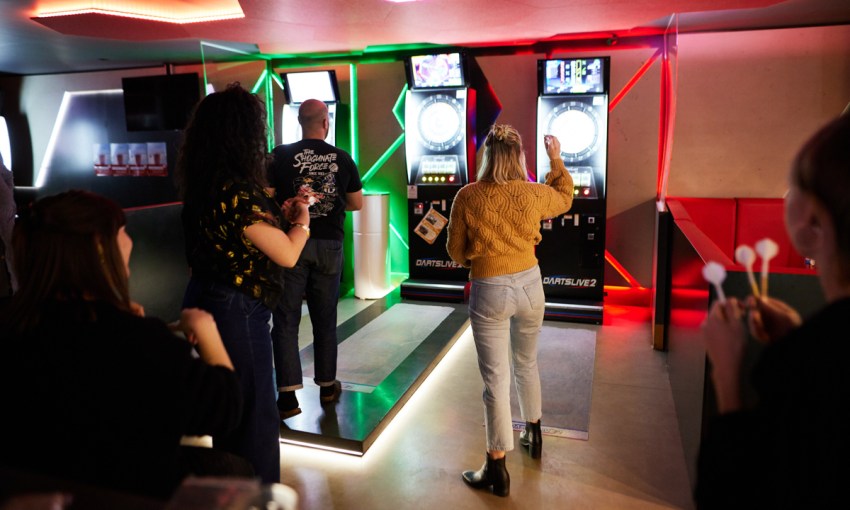 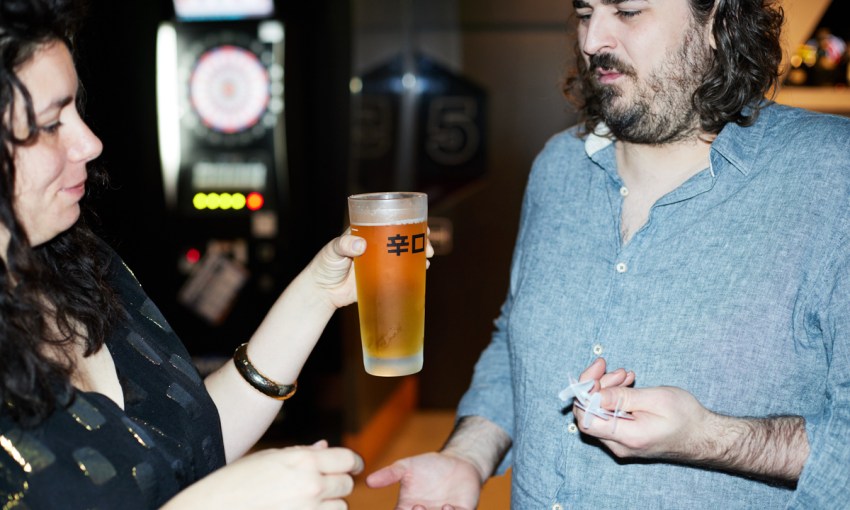 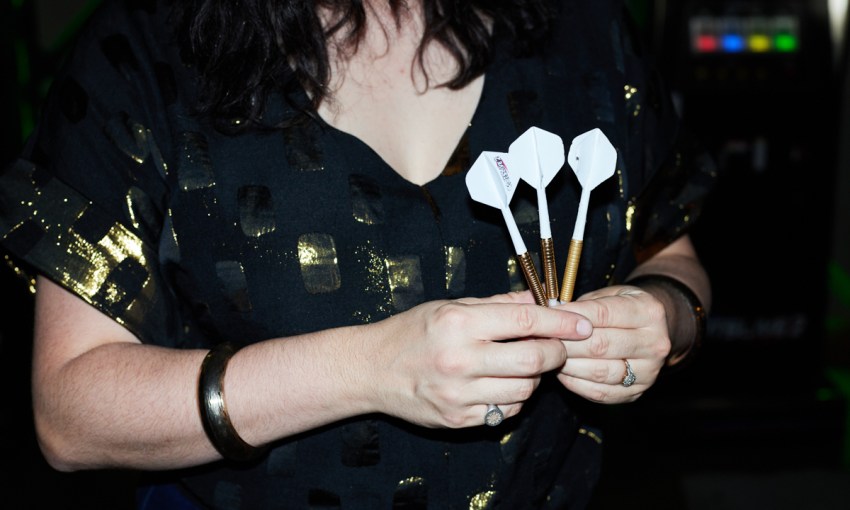 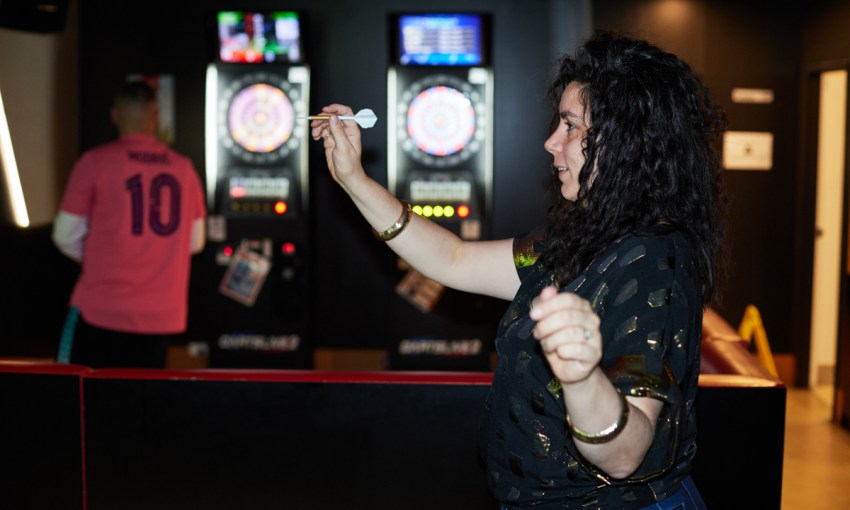 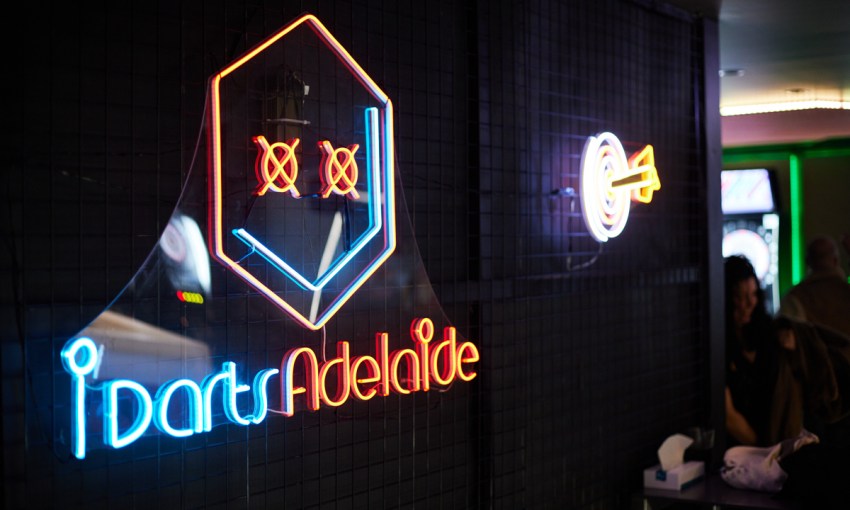 The façade is unassuming – plain, even – marked only by logos printed on the upper-level glass balustrade. A couple of weathered posters for other businesses hang limply in the lobby. It wouldn’t be unfair to say that, on first impression, the place looks a bit sad.

For the uninitiated, i Darts – which manager Michael Chan says “opened about eight years ago” – is a neon-lit adult arcade where dignity goes to die. Throw all notions of cool to the wind – like the casino or Holey Moley, it is comically naff.

Time is meaningless. The windows are masked, as though the building were a stationary party bus. Tinny pinball sound effects and blaring trash-pop render conversation near impossible. If you have ventured upstairs, you’re most likely already quite drunk, and it won’t be until you step out onto the stark balcony for a cigarette, or exit via the stairs, that you discover whether it’s closer to 2pm or 2am. 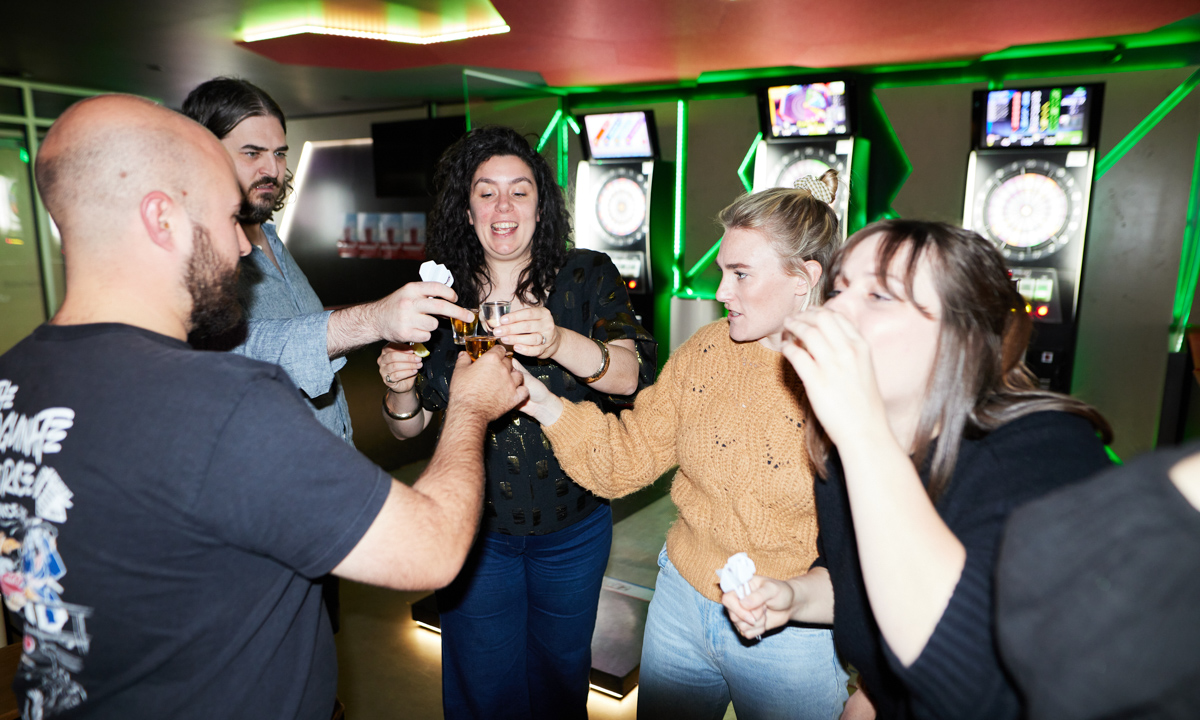 For all its quirks, i Darts is a guaranteed good time. Foremost, it’s an entertainment venue, specialising in a Japanese-invented electronic darts game where players compete in rounds to win the highest score, or eliminate each other in party games. It’s just like regular darts, but sillier, and therefore better. There are flashing lights and drinking games. The machines are reminiscent of the pokies, booming happy melodies whether you score well or poorly, keeping you hooked through simple dopamine manipulation.

As well as darts, there are five private karaoke rooms to hire. One has its own dart board and costs $95 per hour, or $595 for three hours plus three bottles of premium spirits and $50 worth of game credit. Conversely, to play in the open bar starts at just a dollar per person per game, representing incredible value. In the era of 75c Macca’s soft serve cones, where else can you entertain a group of mates for an hour on a tenner each? As well as price, the appeal, says Michael, is that “i Darts has it all”.

For me, i Darts is charming in the same way as ten pin bowling – both require minimal skill and athleticism to participate. It is the sport for people who aren’t good at sports: even if you suck, it’s still fun. The developers of the game have literally made it easier to win than analogue darts, with a bigger bullseye and larger board making the target easier to hit. “But we can teach people with no skill how to play,” Michael explains kindly.

It is also the sport for people who are bad at maths. Unlike regular darts, during which players must calculate their own score, here the machine automatically tallies all winnings and losings, maintaining the happy civility of all participants. “It’s good for drinking, because no one wants to do maths while they’re drinking,” says Michael. 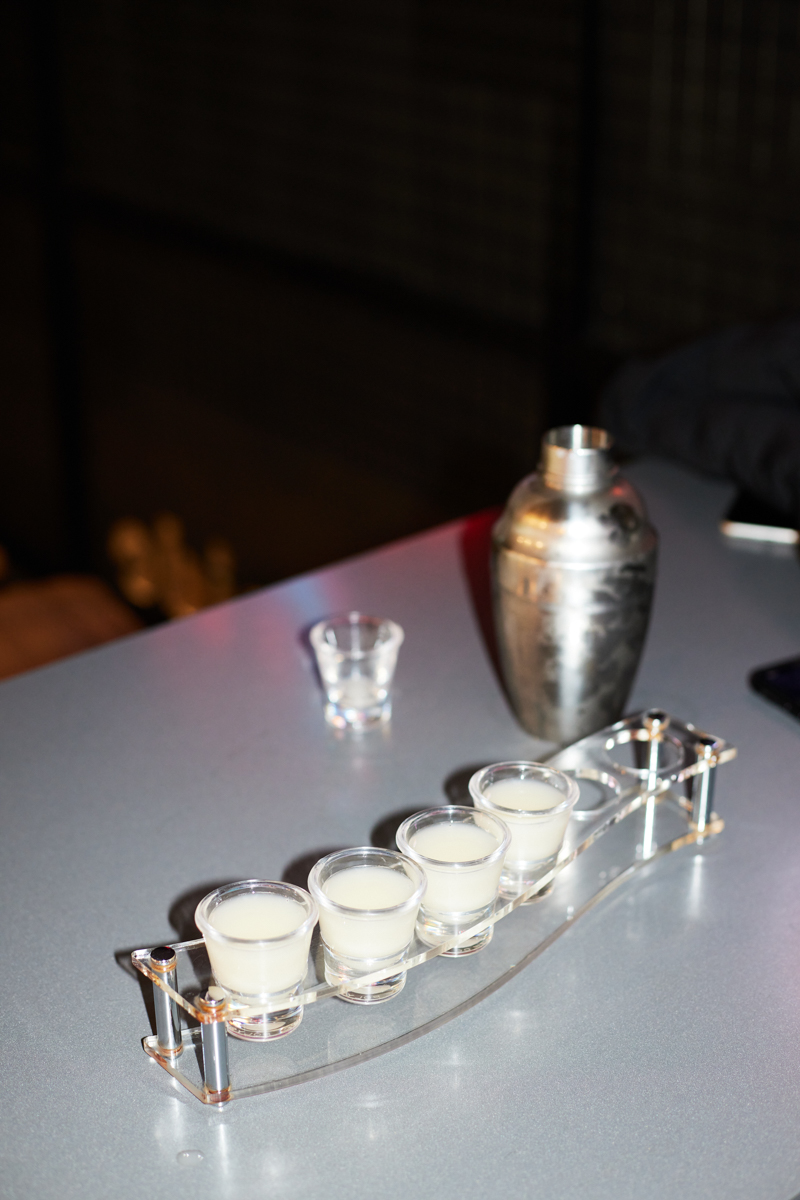 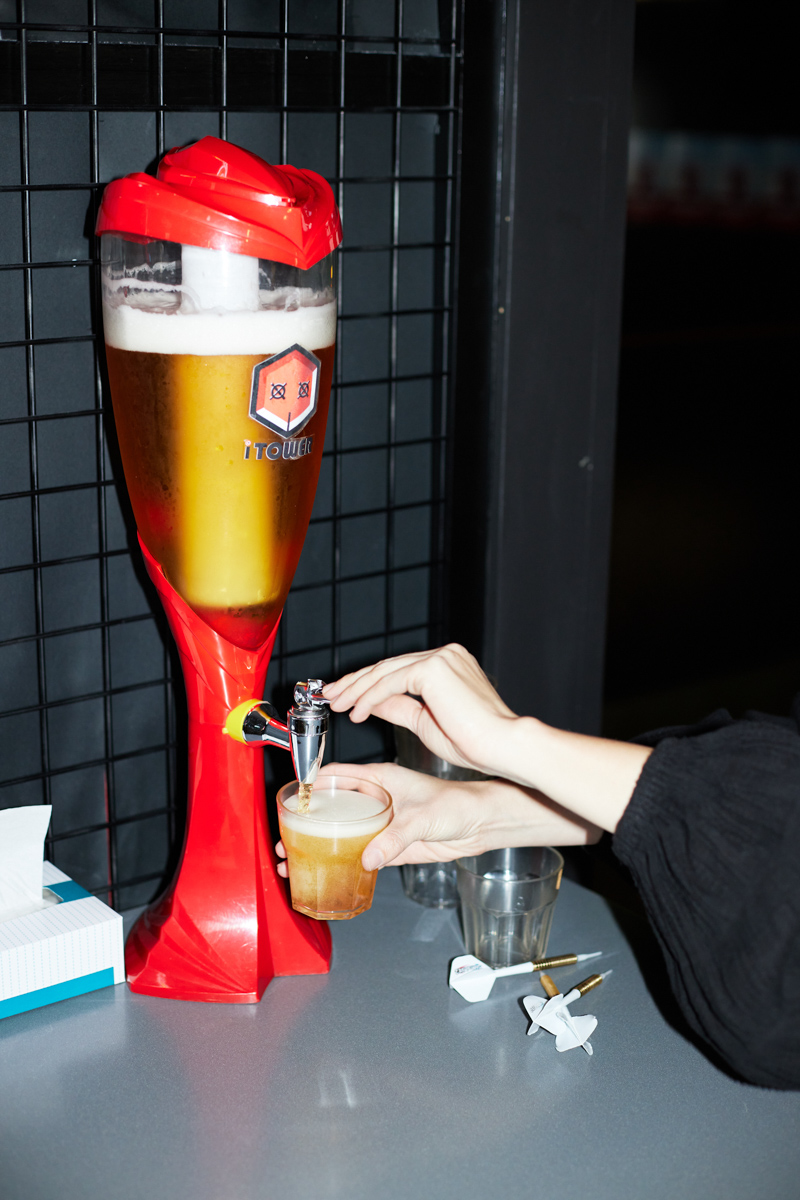 Most crucially, and to build on Michael’s point, i Darts is the drinker’s sport. While there is so much to love about i Darts, my favourite aspect of the experience is the more I drink, the better I get. This is not true of any other activity except pool. And it must be the case for other people too, which would explain the venue’s signature cocktail being comprised of many different alcohols lit on fire and drunk through a straw. It’s called The Bullshooter, and Michael claims the drink was invented at i Darts. “People like it ‘cause it’s on fire,” he says.

The Bullshooter is not the only novelty drink. There are Yakult and soju shakers, blue Alizé on ice, and plastic beer towers served with plastic cups to match. Most of these drinks taste average at best, but they all get the job done.

The same could be said of the food, which runs the gamut of cup noodles (soaked to order), bought-in sushi (formerly from Sushi Train), and meatballs (not homemade). It’s an incongruous mix, but nothing needs to make sense at i Darts.

On weekends, the venue opens at 2pm, and usually closes at 2am. Typically, crowds don’t materialise much before midnight. i Darts is a game for the night, and the night only – for many it is the last stop on an evening out, usually suggested at the exact moment everyone really ought to go home.

Somehow, I am here with friends at five in the afternoon. It is empty, save for the bartender and one semi-professional, practising alone. He ignores us. Regardless, the energy is high. We exchange two twenty-dollar notes for coins at the bar. The bartender returns with two plastic coin bags of one- and two-dollar pieces that we do not bother to count. Anyone who spends eight hours a day listening to people argue about amateur darts over the sound of Kesha’s greatest hits has the demeanour of a saint and deserves your trust. 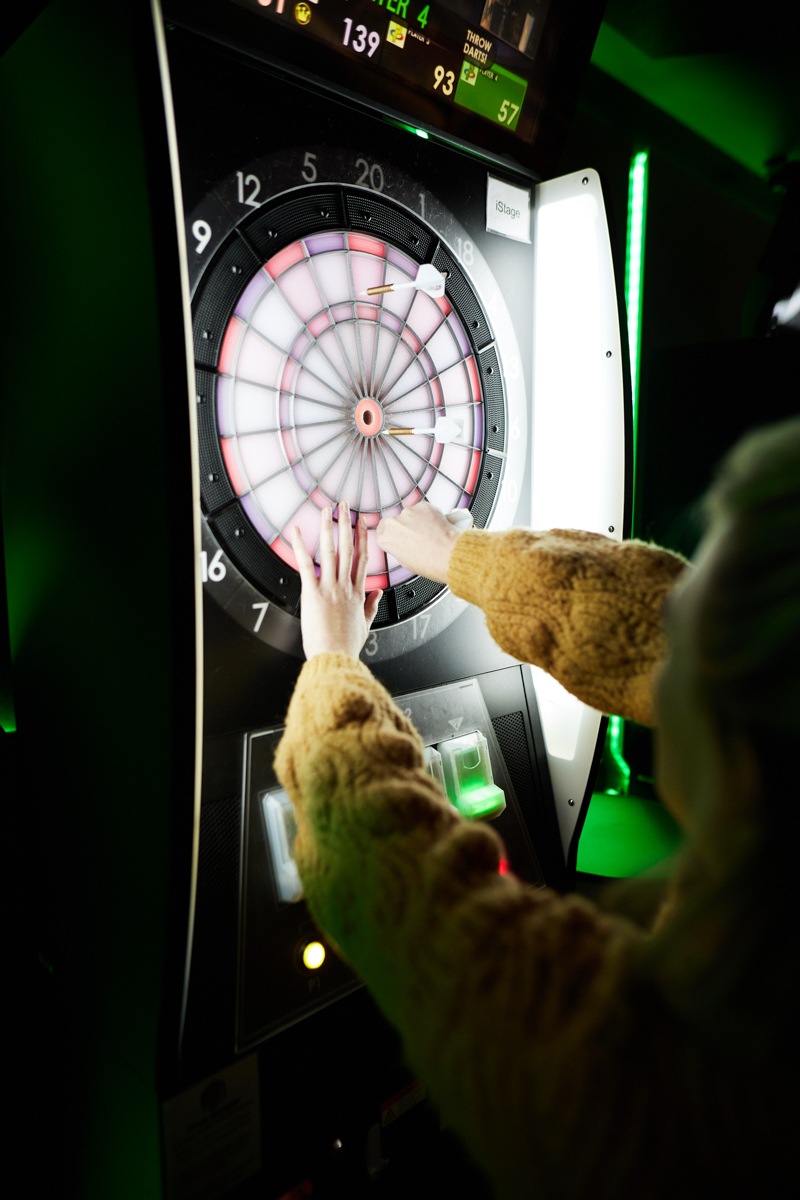 Serious players compete in tournaments, held roughly once a month at the venue. There is modest money to be won, pooled from the entry fees and distributed amongst the winning teams. Big time darts pros Paul Lim, Rob Modra and Steve Letts have all played at the venue at some point over the years, a fact which seems to impress Michael, who is a casual player, but means nothing to me.

If you sign up for an i Darts card ($18 for lifetime membership), it is possible to compete globally. Each game you play affects your ranking, and you can duel with international players in the likes of Hong Kong or Toronto.

We’re here to mess around on the party games. Survivor is a favourite. Every player is allocated one of four colours and 300 points at the start of the match. Taking turns, you must eliminate other players by striking their colour on the board, causing them to lose points. Ganging up on the weakest of the group is encouraged here – the more annoyed they get, the more you win (though this is not reflected on the digital scoreboard). 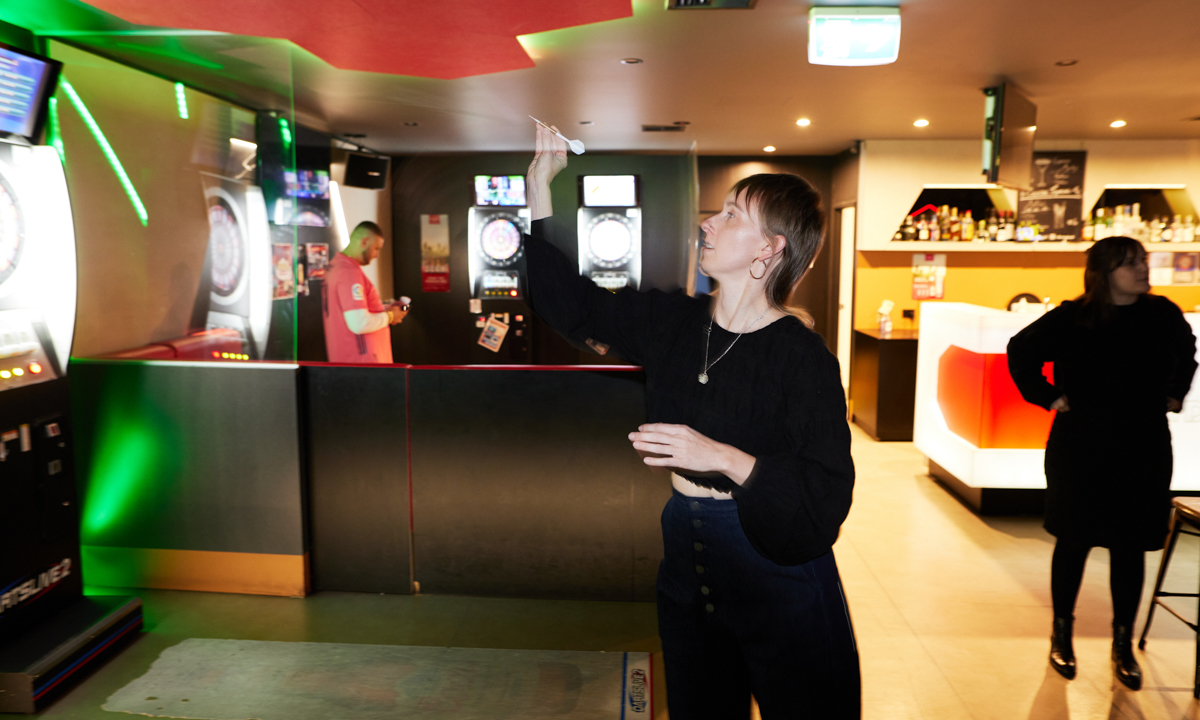 By 5:09pm someone has already bought Yakult shots and an Asahi tower. There are whispers of Fireball. Tomorrow’s hangover is already brewing.

Amazingly, i Darts enjoys a rating of 4.9/5 on Facebook and 4.5/5 on Google – higher than both Golden Boy and Lucia’s. It’s difficult to explain this popularity – it could be the silly drinks, the incredible playlists (curated by ex-basketball-game-DJ Michael), or the novelty of the game itself. For me, it’s the daggy, equalising spirit of the place. Long live i Darts, the finest electronic darts venue in the city.