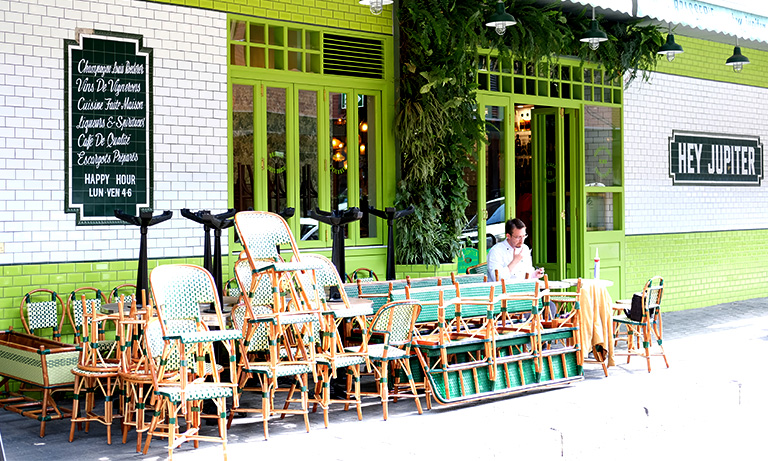 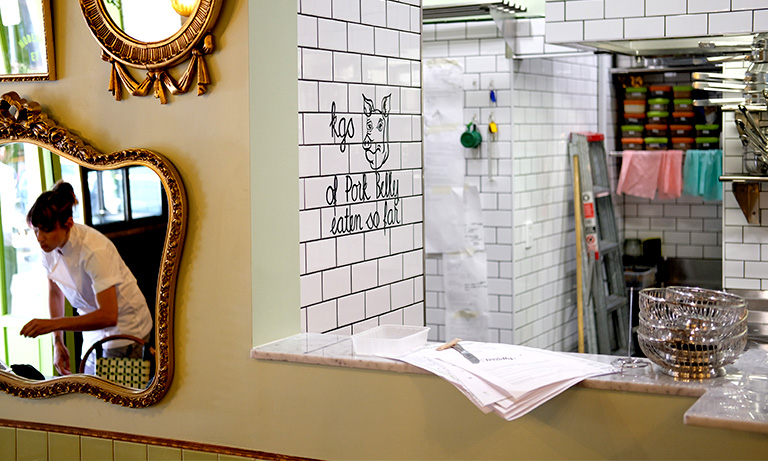 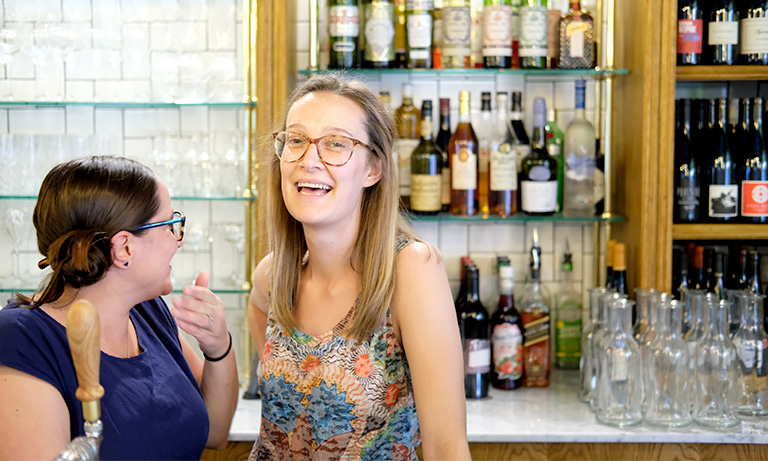 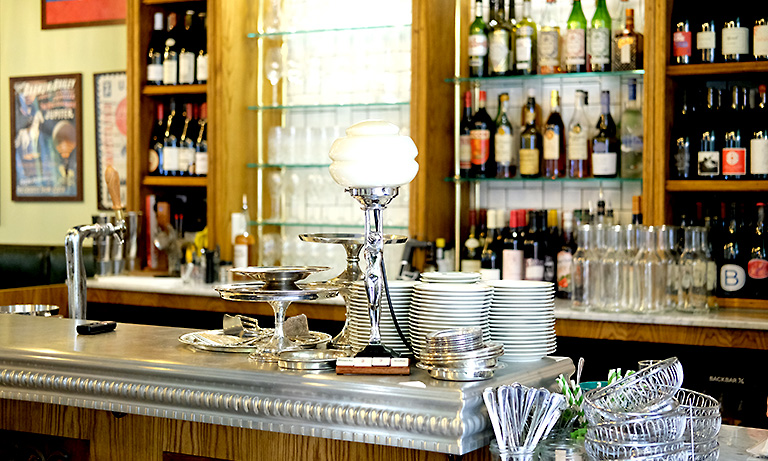 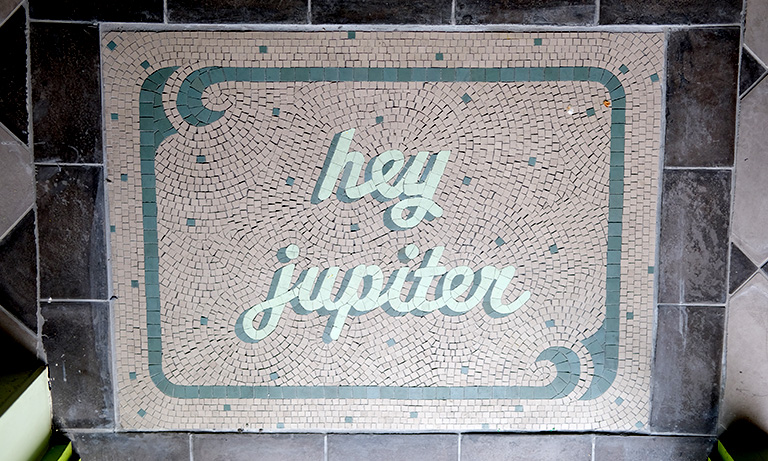 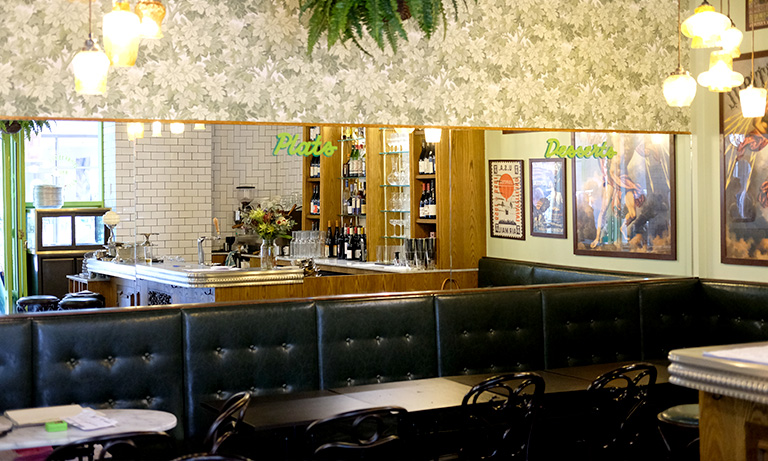 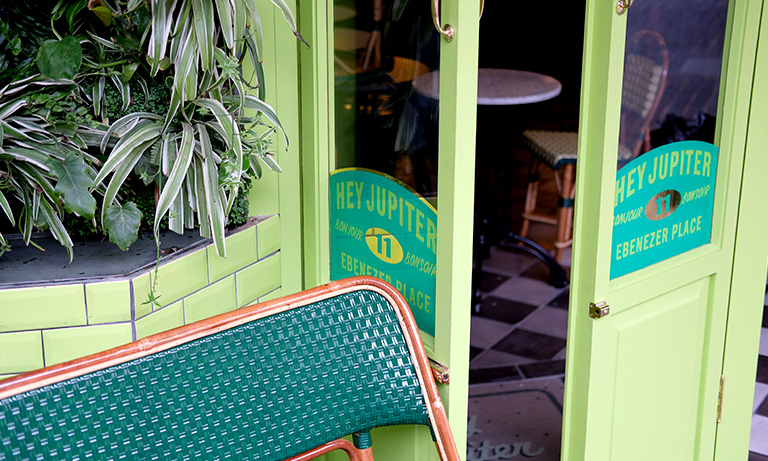 Adelaide’s been without a brasserie since, precisely, forever. We had Guillotine on Gouger but that wasn’t a brasserie because, like all things related to French cuisine – there are rules to running a proper brasserie.

Hey Jupiter’s Jacqueline Lodge and Christophe Zauner will be able to write the book on how to open a brasserie but it’s best not to ask them for tips right now. The 40-seat café they opened in 2012 has been closed for more than three weeks, they sold their house in Melbourne because no bank would put up the capital this expansion required, and the day before opening there are two missing tiles from the otherwise immaculate façade of their new restaurant on Ebenezer Place.

Hey Jupiter re-opens tonight (October 26) – completely re-imagined, from the Charvet induction cooktop in the kitchen to the custom weave of the Maison Gatti furniture on the terrace. Every detail has been considered. We particularly appreciated the frog etching on the wine glasses that marks the 150ml pour level.

“It was the plan from day one,” says Christophe of the evolution from café to brasserie.

“We just didn’t have enough of this at the time when we first opened,” he says, rubbing his thumb and index finger together in the universal sign for cash.

“To be a proper brasserie you need four things – you need the zinc bar, the mirrors, the tiles and this kind of furniture.”

And you need a chef.

Head Chef Stéphane Brizard will lead a team of six in a high-spec kitchen, cooking classic and modern brasserie faire. Hailing from the Lion in North Adelaide, Stéphane has held executive roles in kitchens from Adelaide to Cairns.

The breakfast menu changes very little. And of course, the Pork Belly sandwich remains, but dinner at Hey Jupiter will be where the true brasserie experience comes alive with single plates priced below $30 and a daily special punctuating the gastronomic journey. You’re also not allowed to call yourself a brasserie without steak frites.

The bar program is headed up by Jay Marinis, a familiar face in the East End, who’s worked across and managed some of the best venues in the neighbourhood.

Nighttime trade is a little daunting for Christophe as this is largely uncharted territory for Hey Jupiter.

“We were only ever doing two wines,” he says. “Now we have 150 wines. If Ebenezer is quiet in the evening now, well we have to give people a reason to come here.

“On Tuesdays for example – it’s tripe sausage. It’s unwashed tripe that you make sausage from. Can’t find anybody who makes the unwashed tripe in town, otherwise the chef would have tried to make the sausage himself. So every week we’re flying the sausage in from Melbourne yeah? So I’m paying double the price for the freight. It’s first class sausage.”

Looking at the depth and breadth of Hey Jupiter’s redevelopment, it’s almost overwhelming. Hand-painted signs in gold leaf, customised rattan furniture, state-of-the-art Charvet, Combi oven and more French staff perhaps even than La Buvette, are assembled in something close to Disney-like perfection. And yet it’s completely authentic, built out of an intimate knowledge and appreciation for French culture as a living thing rather than a Pintrest board.

So sit at the zinc bar and run your hand across the embellished front made in France from mouldings between 130-140 years old and toast to Christophe and Jacqui who just might have opened our favourite restaurant of 2017. Santé!