Herringbone is making friends with wine

As Herringbone approaches 12 months in business, the restaurant is finding its niche amongst fans and friends of the wine industry.

Eleven months into trade and Halifax Street restaurant Herringbone is beginning to find its rhythm in Adelaide’s dining scene.

In its first few months, the venue received a string of attention from national magazines and mastheads, but column inches in glossies has done little to calm the nerves of the restaurant’s co-owners, Quentin Whittle, Paul Tripodi and Ben McLeod.

Herringbone’s Yangarra wine dinner is happening from 6:30pm on Tuesday, 30 July. There are just a few tickets left. Book by contacting hello@herringbonerestaurant.com.au or 0428 926 977.

Neither Quentin nor Paul, who speak with CityMag on a Tuesday midafternoon, have forgotten the anxiety of opening weekend.

“We didn’t think anyone was going to come,” Paul laughs.

“Yeah, I remember just before we opened ringing Paul or Ben, and I was like, ‘What if no one fucking comes?’” Quentin laughs.

“They’re like, ‘Don’t worry chef, they’re going to come.’ And sure enough they did, but we were all in.”

Both Quentin and Paul had left “good paying jobs” to found a restaurant they could steer in any direction they liked, which, for all the creative freedom, also has its downsides.

“No one gets into it for the money,” Quentin laughs.

“It’s hard to make money in a restaurant. Simple as that. At best, your profit margin’s probably 10 to 15 per cent, and that’s alleviated by how much you want to work as well, if you’re a working partner.

“We’re really proud of trying to source the best possible produce – I know a lot of people say that, but not a lot of people can actually stand by it, and I feel that we do.

“We could make more money by not doing it, but we stand by it. I don’t have to buy vegetables from the Fleurieu, but I want to, because it means something to me, you know? And it gives us authenticity of product.”

The first year in business is often the most difficult; every month has its own rhythm and only once you’ve made through all 12 do you get a proper sense of where and how you can improve upon the business.

We ask if the duo has an idea of how Herringbone has come to be seen in the Adelaide hospitality landscape, and neither has an answer. They do know that they’ve built exactly the restaurant they intended.

“We wanted to be an independent restaurant that is busy, that continually evolves and is a fun place to come and work, and to come and eat… We wanted to enjoy it ourselves as well,” Quentin says. 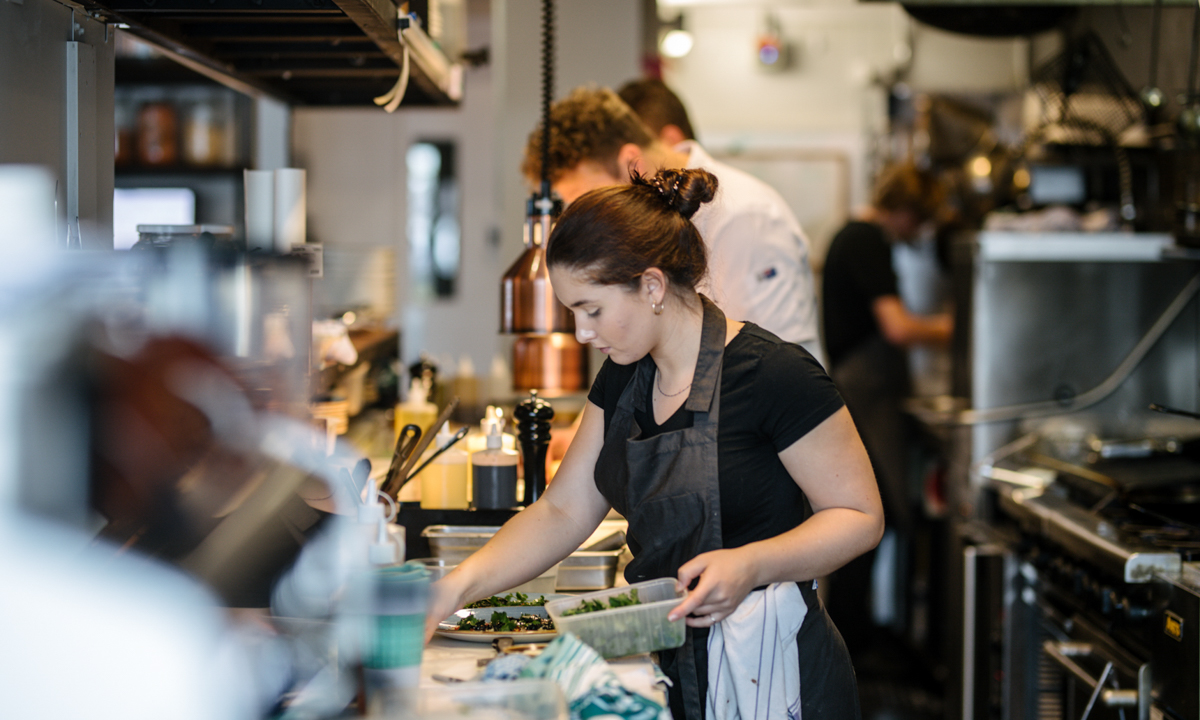 Its menu is a single page, as is its wine list, and aside from the food menu’s first iteration, which Quentin admits was a grander statement than he needed to make (“I thought there were going to be these high expectations, but I think it was just my own expectations”), the restaurant has evolved and iterated on itself slowly.

One market Herringbone seems to be well suited to is the hospitality industry – producers, particularly winemakers and their ilk.

Herringbone hosted the 2019 PorkStar event – an industry dinner held by Australian Pork; it was the restaurant of choice for Shaw + Smith to celebrate their 30th anniversary of making wine; and this week the restaurant has invited Yangarra Estate’s Peter Fraser in to showcase his wares via five-course paired dinner.

“We’re a wine-friendly venue; we’ve just started Tuesday nights we do a no charge for BYO, so it’s sort of like open your cellar sort of thing,” Quentin says.

“[And] we wouldn’t be unhappy if we were seen [as wine-friendly] by the wine industry.

“We’re finding that the venue lends itself to having a 60-70-person sit-down event, which is a really nice homely vibe, you know? And conducive to people having a good time and connecting.”

For Peter, the association between Herringbone and Yangarra comes naturally.

“My wife’s office is two doors down the road, so I’ve been there a few times and their slow-cooked lamb shoulder has been a favourite,” he says.

“I did a lunch there with some customers as well, and I thought their food really showcased their wines really well.

“Quentin and I sat down and he talked about some of the ideas he had and I talked about wines that might suit it, and it all came off really quickly.”

The Yangarra event will see the winery’s museum stock presented alongside their current-release wines, matched to food prepared with the wines as the central reference point.

The evening will start with scallop and the grilled octopus canapés, a raw kingfish dish with pear and miso, gnocchi with cotechino sausage, Peter’s favourite lamb dish (featuring pomegranate, smoky eggplant, fried chillies, and finishing with a cheese course. 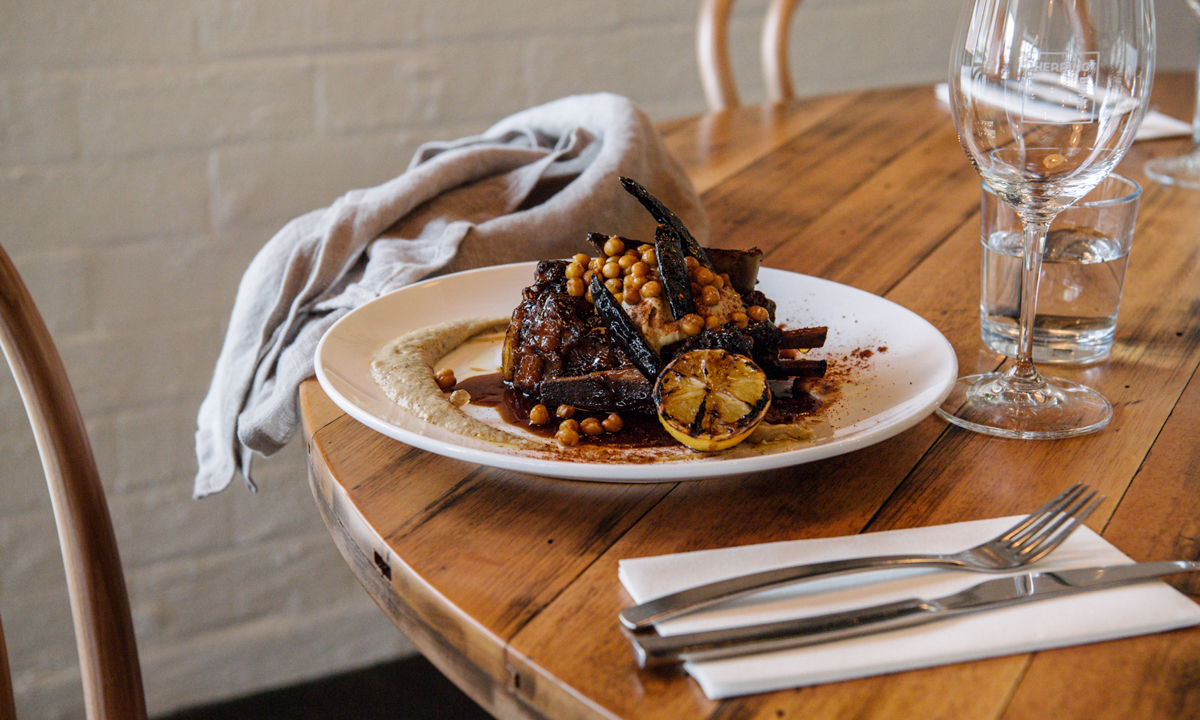 Herringbone’s wine list is entirely designed around wines the team enjoys drinking, and so for both Quentin and Paul, events like these are about creating a connection with producers they admire.

“It’s not going to happen every few weeks or monthly or anything, it’ll just be when we feel like someone’s best suited to do it, and they’re keen,” Paul says.

“We don’t want to water the whole thing down,” Quentin continues.

“It’s important for Paul and I to create a connection with people. We’re not doing it primarily to broaden our market space, we’re doing it to connect with the winery because we genuinely enjoy selling their wine, and we’ll do so ongoing. That’s why it’s important for us.”

Quentin admits to being a pessimist in business, in the most pragmatic sense. He’s not one to count his chickens before they hatch. It keeps you honest and stops you becoming complacent, he says.

He notes the strange way people and businesses in his industry are judged; a newspaper or magazine review will capture a snapshot of the restaurant – just a single moment in time (usually within the restaurant’s first three months) locked for eternity in ink or pixels.

Meanwhile, the kitchen team churns above the stove, day in and day out, with the sole intent of warming the hearts of their guests via their stomachs.

Every day brings several hundred individual moments in time, each one more important on its own than the unquantifiable media limelight.

“I remember when I did some travelling in Vietnam for a month… I said thank you to the chef where we had lunch, and he said, ‘You don’t need to say that. You say thank you the next time you come back,’” Quentin says.

It’s this attitude that makes us certain Herringbone’s first anniversary won’t be its last. 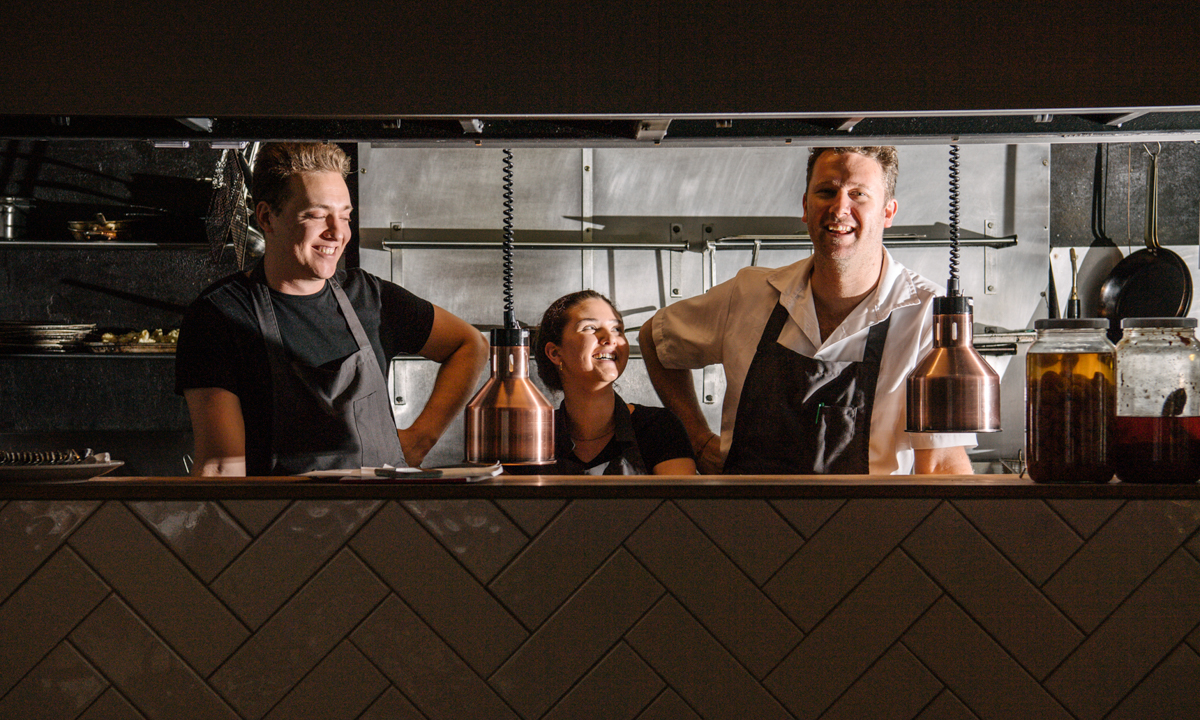