Leisurely Coffee is serving up great coffee and an all-halal menu, including breakfast bao buns with beef bacon, in the old Paddy’s Lantern shopfront.

A day before Leisurely Coffee founder Ibrahim Yu opened the door to his new café, he tells CityMag he’s hoping for a quiet first couple of days to let him get used to the space.

When we visit again the next day, there’s barely a table available. Both the kitchen and coffee teams are churning out order after order, and the floor staff are never given an opportunity to sit still.

The space is much brighter than in its previous iteration, with LED strips illuminating some of the space, but much of the light spilling in through the skylights.

There is a retail section – selling coffee beans, merchandise and equipment for brewing a cup at home.

The white Synesso coffee machine is a prominent feature of the venue, with seating strewn along the wall, the front window, and some seating available out front.

With a day of trade now behind him, Ibrahim is heartened by the reception his Leisurely Coffee received.

“Day one was hectic,” he laughs.

“I’ve been in the industry nine years, but when it comes to doors open finally, even though you plan, there are a lot of surprises.

“But luckily I’ve got a good team – a new team but a very good team.”

“I’ve been his apprentice for a year and a half in the Devour kitchen, since I moved on from being a barista,” Ibrahim says.

“He gave me advice on this project from day one, and not only the menu.”

There are both vegetarian and meat-filled dumplings on the menu, a croissant with soft-shell crab, and a cold noodle dish (available vegetarian), but the showpiece of this inaugural offering is the beef bao buns. 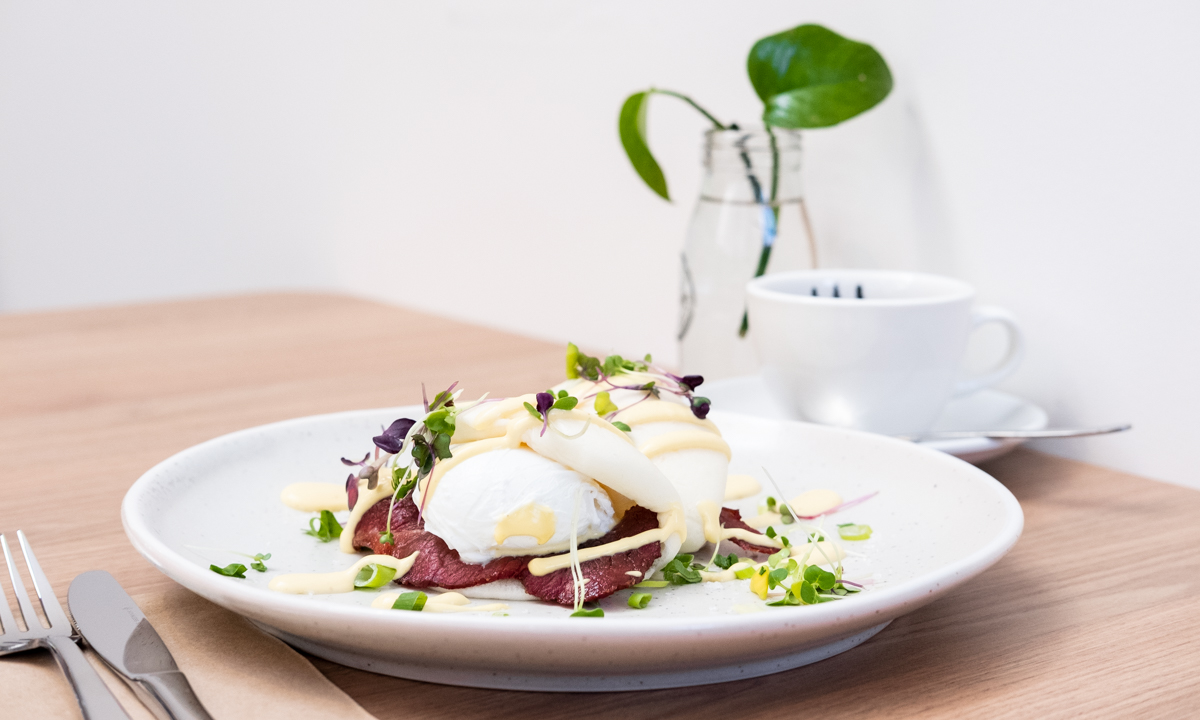 Ibrahim and Michael worked with Aus Star Meat to create a custom brisket that could mimic the experience of bacon, suitable for Leisurely’s halal diners.

“We had all the Muslim community come and try the halal bacon bao bun,” Ibrahim says.

“Look at it this way, when you go to Chinese dumpling restaurants, [they’re not] halal. So for [the halal community], it’s impossible to go out dining for Chinese dumplings.

“That’s why, even though it’s hard work… it’s worth it, to provide a space where they can come and try the menu that we created.”

The coffee on pour comes from Canberran roasters Ona, and is available in all the espresso forms one might expect, as well as in filter formats: pour over and batch brew. The first cup of batch brew is $4, and refills from then on are $3.50.

Leisurely Coffee is open from 7am ‘til 3pm Monday to Saturday.