After 13 years, Gill Gordon Smith will pass the reins of her influential Aldinga bottle shop and wine bar to new owner Margot Muir at the end of March.

The late-afternoon sun shines brightly on lawn out front of Fall From Grace on a recent Thursday.

SPC has fired up its portable oven, ready to cater to a contingency of wine lovers who will start appearing at the Aldinga bar and bottle shop in about an hour.

Gill Gordon Smith, Fall From Grace’s founder, greets CityMag under the verandah and leads us into the shop, where we’re introduced to Margot Muir, who wears an excited, knowing smile.

Adelaide hospitality heads will recognise Margot as the manager of Edinburgh Cellars in Mitcham, a role she’s held for the last decade.

Over the last few months, Margot has been an increasingly frequent presence at Fall From Grace, and will only be more so from Friday, 1 April, when she officially takes ownership of the business.

“We’ve finally got here, after quite a while. And we both keep crying all the time,” Gill says.

The business was inspired by Caves de Pyrene, a bottle shop Gill regularly visited in London while working as a QANTAS flight attendant which has a similar fascination with natural wines.

Gill, who helped design QANTAS’ Sommelier in the Sky program, would have wines delivered to her hotel and invite the rest of the cabin crew in to go through a tasting.

The first Fall From Grace shop opened on Main Road in McLaren Vale. Four years later, it moved to High Street in Willunga. After another four years, Gill moved the shop to Aldinga, operating within The Old Vine, a café run by Rob Kolencik, on Old Coach Road.

Rob moved on one year later, and Gill shifted the business to the bank of shops on the corner of Old Coach and Port roads, where it’s currently based.

From its earliest days, Fall From Grace has been a meeting place for an emerging generation of winemakers.

The shop has long hosted small makers on Friday nights, providing an early opportunity to showcase their wines and get feedback from the public. The first producers Gill featured were then-nascent talents Taras Ochota and Brendon Keys.

Gill also recalls an early event held at the McLaren Vale Fall From Grace, the Garden of Eden dinner, which, in hindsight, was a significant meeting of minds, with winemakers from Aphelion, Berg Herring, Year Wines, Koltz Wines and Brash Higgins in attendance.

“Every young winemaker that’s doing their own thing now was at that dinner,” she says. “That was the most beautiful dinner.”

These connections, and Gill’s unique local and international wine selection, made Fall From Grace a must-visit shop for anyone wanting to experience minimal-intervention wines or engage with the South Australian wine industry’s next generation. 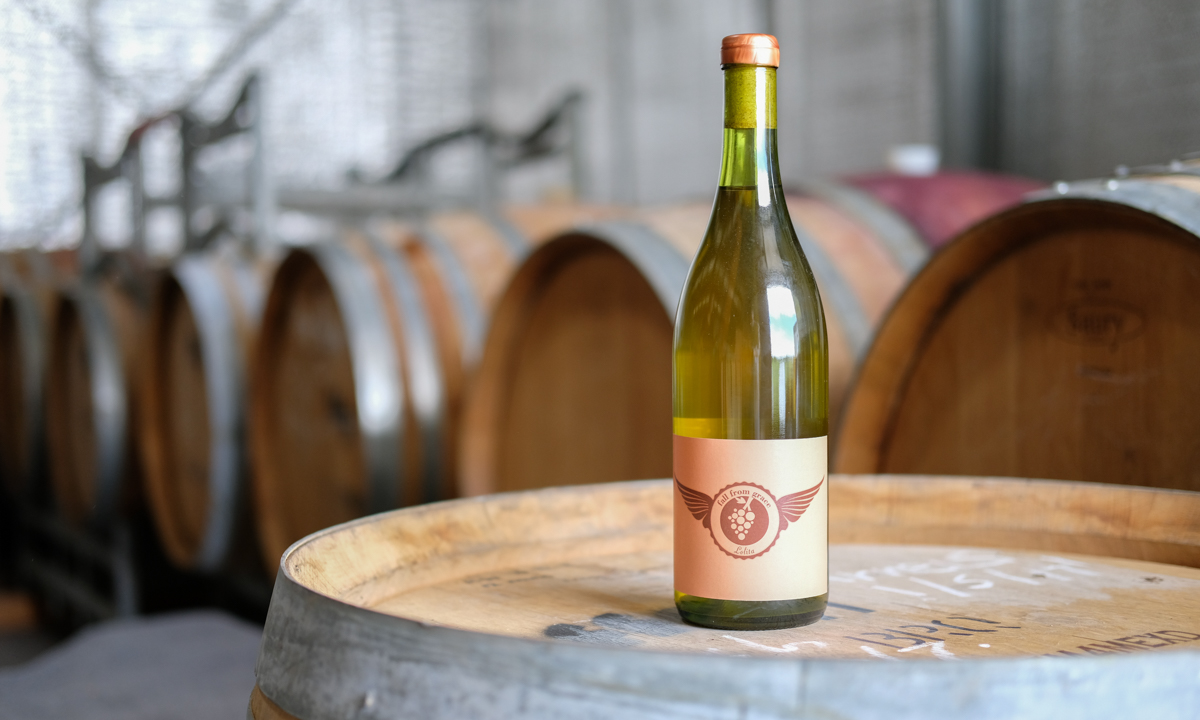 People also visit for Gill’s wines, like the Fall From Grace ‘Lolita’ Arneis

One such person was Margot Muir, who recalls first interacting with Fall From Grace at Willunga and immediately connecting with its “community spirit”.

Margot comes from a family of hoteliers (she and her siblings still hold the freehold of the Old Bushman Hotel in Gawler, which her grandparents bought in the ‘40s), but when her parents sold the business, she moved into the wine world as a sales representative. She worked for Hugo Wines, Penfolds Magill Estate, and spent a long time working for Negociants Australia.

In 2011, Margot joined Edinburgh Cellars, and, like Gill, she used her position at the pub to promote small and emerging makers.

“A lot of young winemakers that came up through various wines that I represented have now gone out on their own, and it’s been really awesome to support them in different roles that I’ve had,” Margot says.

“People like Nat Fryar, who was the winemaker behind Jansz for all those years, and now she’s gone out on her own and she’s got Bellebonne, and with her partner (Hugh McCullough). She’s also got Wellington & Wolfe, and she makes gin as well.

“Those sorts of relationships, I love it. It’s what gets you up in the morning.”

This shared ethos was a major factor in Gill deciding to sell to Margot.

The conversation started two years ago. Margot was perched with a drink at the Fall From Grace lawn when Gill suggested she should consider buying the business. “I joked about it, but I wasn’t joking about it,” Gill says. She could feel time was approaching to move on.

In addition to running the bottle shop, Gill also makes wine under the Fall From Grace wine label and runs the South Australian Wine and Spirits Education Trust (WSET) course, which recently added the Cert IV Diploma. She works seven days a week, but it wasn’t until she was forced to reckon with an illness in her family that she realised her workload had become unsustainable.

“I was just sort of thinking, ‘I do need to leave here at some stage’, but I like to plan things well out in advance. I definitely look ahead for things, and I thought, ‘She’s the right person’,” Gill says of why she pitched Margot.

It was another 12 months before Margot came back to Gill to discuss the proposal seriously, and a deal was struck a little while after. 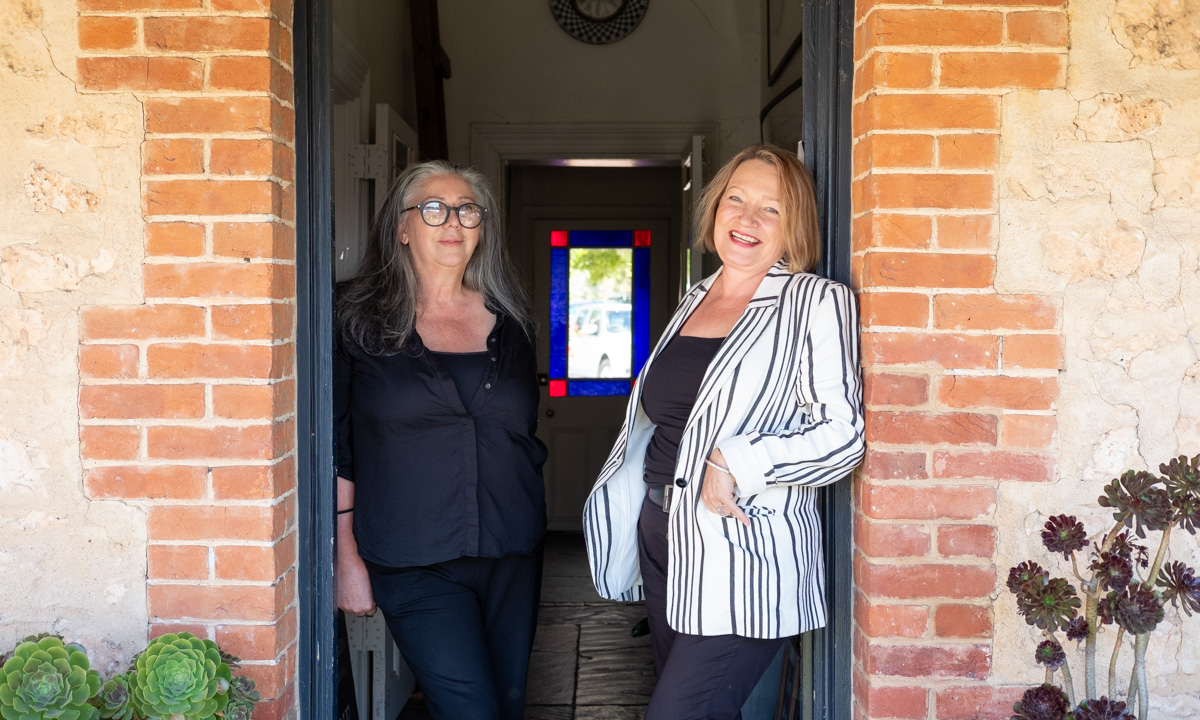 For Margot, the timing was right. She felt she had made her mark after 10 years at The Ed, and it was time to make way for someone new.

“I always thought of myself as just being the custodian of the Edinburgh Cellars, as my predecessors have been, like James Marsh and Sarah Hutton,” Margot says.

“We do like to think that we’re indispensable, but life, businesses will go on and other people will come into the picture.

“And I’ve left the business in great hands; Sam Taylor is wonderful. He’s got an amazing palate, he’s young, enthusiastic, and putting his own stamp on things already.”

Smilarly, Gill says she’s taken Fall From Grace as far as she can. “Businesses do need new blood, and they need to be refreshed,” she says. But she would sooner “put in a manager than sell it to somebody who wasn’t going to… have the ethos of being warm, and have so much integrity, and really care about wine and the industry”.

“I’m just really happy as well that it’s a strong woman in the industry that’s going to do a fabulous job,” Gill says.

Throughout our conversation, Margot humbly deflects Gill’s many compliments, but she reiterates her commitment to maintaining Fall From Grace’s community-minded core.

“Without community, you don’t have anything,” Margot says.

“No business can survive without that relationship with that core audience. Because you can’t be all things to all people, and you don’t want to be. You have to be true to who you are.

“I hope that I do what Gill’s done justice, and bring everyone along with me. I’ve got a very similar philosophy and a very similar ethos, so I think it’ll be more of the same, but maybe slightly different.”

After the sale is finalised on 31 March, Gill will make an effort to slow down – though her post-Fall From Grace workload is enough to make CityMag tired.

She will continue to teach the WSET program, and she has founded a new wine label, La Madrina (Italian for ‘The Godmother’), which will see her dive ever deeper into her passion for Italian varieties.

By 2024, she plans to spend six months of the year in Italy, where she’ll make wine and foster connections between Italian winemakers and McLaren Vale, bringing some over to play with local Italian varieties.

And she hopes to expand her role as an industry mentor.

“I’m doing a lot more mentoring these days, which is great, and I want to spend a lot more time doing that.” Gill says.

“It’s really important that young women see successful women in the industry, and see women that have built and run businesses, and that can come and talk to you and get mentoring.”

Gill is also looking forward to one activity that does fit within the category of taking it easy – enjoying the business she built from the guest’s perspective.

“I’ve never ever experienced Fall From Grace. I’ve only experienced what people have told me,” she says.

“I’m really looking forward to actually being able to socialise instead of just being Mumma Chook, running around telling everybody off, cleaning up the mess. I really do want to experience that.

“I need to spend more time with family and actually allow myself to have a break, because this has been my child. We don’t have kids. Every single person that has walked through here, I love it, they’ve been my kids.