Being the first cafè in SA to use Melbourne's Industry Beans is not Tell Henry's only point of difference - the mixed-use venue is also leading a quiet transformation in Kent Town. 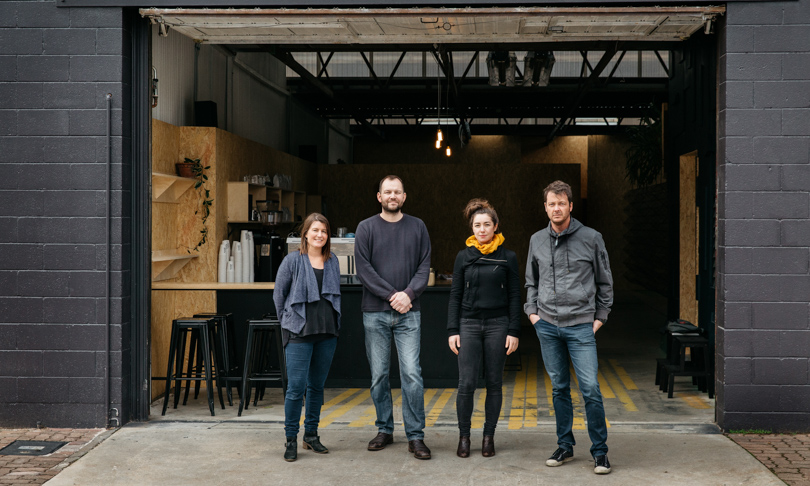 Kent Town has long been known to most solely as the home of the Tin Cat Café and Bunnings. It’s also that place you drive through on the way to the Norwood Parade.

Tell Henry is open from next week – Monday, July 20. Visit Brad and the Rodeo team at 20 The Parade West, Kent Town from 7am, Monday to Saturday.

Curiously though, given the proliferation of creatives around the place, there’s not so many café options available.

Tell Henry looks to change that, and to change a few other things too.

“The coffee comes first and everything else is here to support that,” says Brad Bonar, the co-owner and operator of Tell Henry.

“We originally went in to Industry Beans in Melbourne to look at how they had handled their warehouse conversion – not the coffee. But we went in and loved the coffee, loved the guys, and we got on really well and ended up deciding to take Industry Beans as our coffee.”

Brad on the handles

Brad spent time with the owners of Industry in Melbourne, learning to perfect the technique for working with their beans. As well as making each coffee using a double ristretto pour, rather than a single espresso pour (because, “you don’t get that bitterness,” says Brad) Tell Henry has on hand a specialised Mahlkonig grinder that can process many different roasts one after another without cross-contamination, meaning Brad can carry many different coffee choices for his customers.

Being Canadian, Brad will also be heavily invested in the authenticity of the food offering at Tell Henry, which will consist of bagels and pastries.

The café’s fitout was designed by his partner and co-owner, Sharon Mackay, a trained landscape architect and urban designer, who says she wanted to make sure the Tell Henry experience was “as much about coming in and having a chat to Brad as possible”.

Sharon is also responsible for finding the old mechanic’s workshop that is home to the venue, and for bringing on board Rodeo creative agency who are also moving into the building.

It was Sharon’s background in Government  – where she worked on projects that canvassed Kent Town’s potential as a creative business hub (its high, apparently), and contributed to work that saw the targets for numbers of residents in the suburbs lifted – that got her interested in starting something up in the area, where she and Brad also live.

“Opening this can just help to establish a little bit more of a community feel, which is what the council is after – we’ll be the guinea pigs,” she says.

As well as designing the Tell Henry space, Sharon worked alongside owner of Rodeo Tobin Lush to section out the floorplan and divide studio space from public space without cutting them off from one another. Rodeo will permanently occupy the studio space and are in the process of recruiting another business to move in as well.

“A big part of this is to have that access to public where, sure, they won’t be sitting down with anyone while we work, but there is a window into what goes on,” says Tobin. “That’s a really important thing because it allows a conversation and an understanding around the process rather than the end outcome.”

That sense of permeability has been achieved via the centrepiece of the warehouse conversion – a steel grid-like curtain sculpture devised by JamFactory artist Christian Hall that runs through the space, physically but not visually dividing the studio from the public area.

The final element of the Tell Henry and Rodeo collaboration is a shopfront that also forms part of the warehouse building, which Sharon, Brad and Tobin are hoping to fill with a tenant soon.

For now though, watching Tobin and his team at Rodeo work while you take a break and sip on one of Brad’s lovingly crafted coffees is more than enough reason for a trip to Kent Town.