Espresso bar Commute is coming to the Adelaide Railway Station

A new opportunity for caffeine, made-to-order grab-and-go snacks, and a moment of peace amid the rush is coming to the Railway Station from some new players in the Adelaide food scene.

In a space that has, over the last two years, been an outpost for both The Beigelry and Elementary Coffee, Isabelle Shawyer, Wilson Shawyer and Ash Peek are currently fitting out a new espresso bar concept: Commute.

The coffee stop takes its name from the transitory nature of its Adelaide Railway Station locale, joining the station’s ramp between The Donut Inn and Konbini, and will feature an offering geared towards speed, convenience and quality.

“I don’t want to say that in a derogatory way… but they’re often a lot of pre-bought, pre-made, reheated, deep-fried kind of venues.

“Having seen The Guardsman and what they’ve done down there, Platform 10 are doing some really cool things, and obviously with Madame Hanoi upstairs, and the whole general refurb upstairs, there’s big value in this for us.”

Commute will have granola and a four or five-item selectin of sandwiches on offer, each designed as a collaboration between the entire team but led by head chef Ash. All the sandwiches will be made to order.

The team has decided to keep Elementary Coffee on pour at the space.

“I think they’re a great brand. I think Brad’s got a really cool concept and vibe that he has with his coffee at the moment,’ Wilson says.

“It’s nothing overpowering, it’s really consistent and it’s tasty. It’s not a dark roast, it’s not a light roast, it’s not super seasonal, so you’re not going to have to change the blend every three months and you might lose clientele in that aspect, because it’s either going to be too fruity or too chocolatey. It’s a consistent year-round blend.”

In addition to espresso, Commute will also offer batch brew – the fastest (and, in CityMag’s opinion, tastiest) of all morning-commute pours.

The space will also be refurbed in line with Commute’s aesthetic, and Isabelle, Wilson and Ash’s hospitality philosophy.

“So it’s going to have this train carriage vibe… we’re building in big U banquette.

“People can sit there, they can people-watch, they can see all the flow of traffic, people coming up.”

The hope is that the space will operate on two levels – service from the façade will be fast-paced to match the nature of people flowing through the thoroughfare, but people can also step in out of the rush and sit for a moment with a coffee while they wait for a train.

Isabell, Wilson and Ash were handed over the space at the end of June, but the Commute concept won’t launch until 13 July.

In the meantime, the team will be slinging coffees and getting a feel for how the place trades, albeit with a limited coffee and cake offering.

Isabelle and Wilson, who are respectively from Germany and Australia originally, came to Adelaide from London about 18 months ago. The couple met in the UK while working for hospitality company Corbin & King, where they both spent an extended period of their careers.

It was a surprisingly daunting task coming into Adelaide’s tightknit hospitality scene from London.

“I found it harder than I imagined it,” Isabelle says.

“It was hard, because – and this is not negative at all – but you have to know people here to get in. The more people you know, the easier it is. We didn’t know anyone. We knew nothing.” 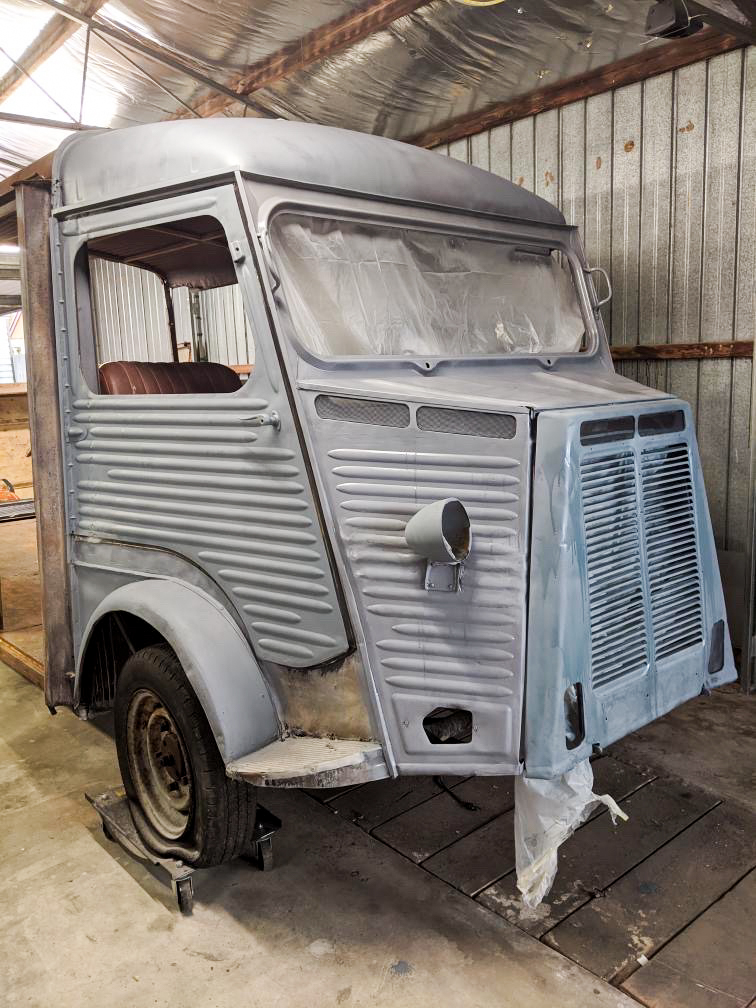 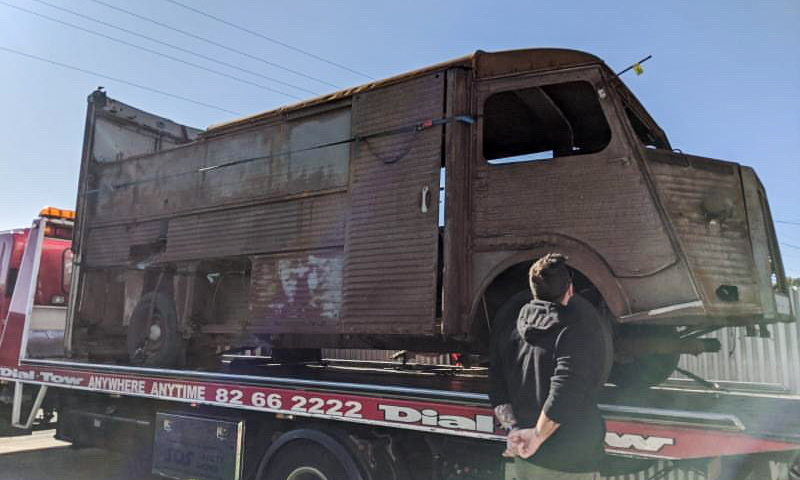 Above: The Truck ‘N’ Roll 1975 Citroën HY fresh off the boat; Right: Mid-refurb

Commute is the first business the duo will officially launch off their own backs, but prior to COVID hitting, they had another concept about to hit the streets: Truck ‘N’ Roll.

The food van concept had been in the works for five years, ever since the duo saw an old Citroën HY truck repurposed as a food van in a market in Isabelle’s native Germany.

Through much searching in online forums, Wilson met Casper Pasman, a collector who refurbishes old Citroën HYs. He’d found a 1975 model in Italy and could sell it to Wilson for €4,000.

The deal was done, but getting the van to Australia from Europe presented many issues – the couple had to have owned the vehicle for a minimum of 12 months, all asbestos needed to be removed from the structure, they needed to ensure it met Australian weight limits and original components of the vehicle were maintained or restored so as to fit the historical vehicle classification.

The truck landed in Australia early in 2020, just prior to the national hospitality industry going into hibernation.

This was, understandably, a setback.

Rather than be deterred, Isabelle and Wilson instead kept their ears to the ground for other opportunities while helping out in venues across the city through the hospo network they’d built up.

Up until the pandemic, Isabelle worked at Sublime Café in Clarence Park and Wilson continues to work at Frankly Bagels and Hellbound – both of whom he supplies his specialty pastrami (which will also feature prominently at Commute and Truck ‘N’ Roll).

Elementary owner Brad Nixon spoke with Wilson at Frankly about the Railway Station site, and he brought a concept home to Isabelle.

“She puts it in the way that, I’m the ideas man, she’s my resounding sanity,” Wilson smiles.

“This was the first time ever within five minutes she was like, ‘Yeah, ok.’”

Commute will offer the team the “financial footing to finish” Truck ‘N’ Roll, Wilson says, with a loose launch date of this coming summer.

Until then, the trio’s attention is trained to the Adelaide Railway Station, preparing for Commute’s official launch on Monday, 13 July.

You’ll eventually find the business on the Adelaide Railway Station ramp, but you can connect with them now via Instagram.