A concise breakfast and lunch menu of made-to-order salads and sandwiches, cold-pressed juices and coffee, all housed within a tiny Sans-Arc-designed hole in the wall. 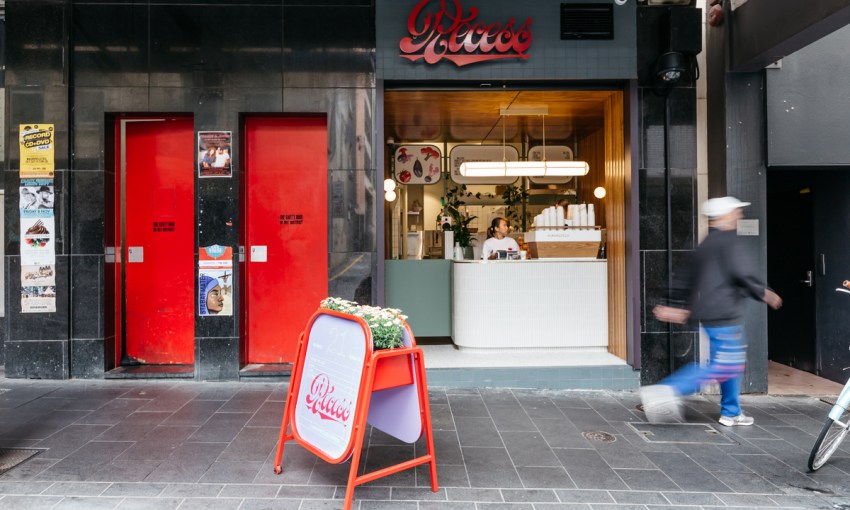 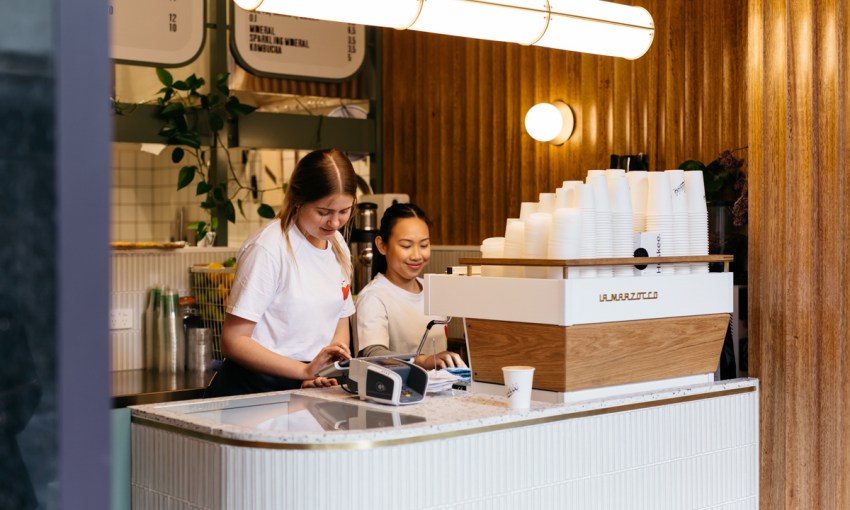 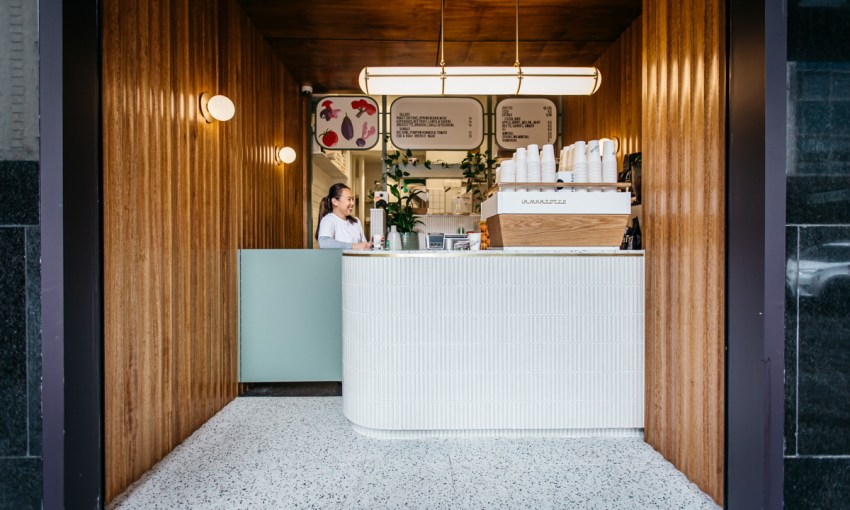 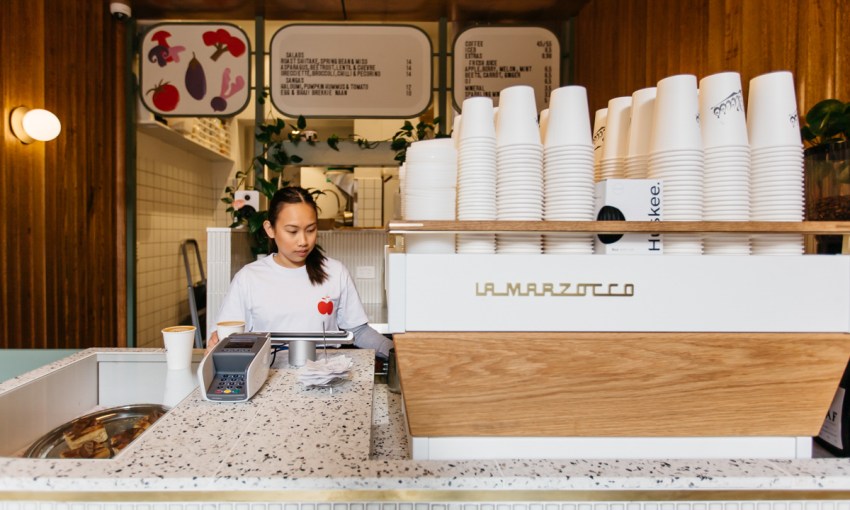 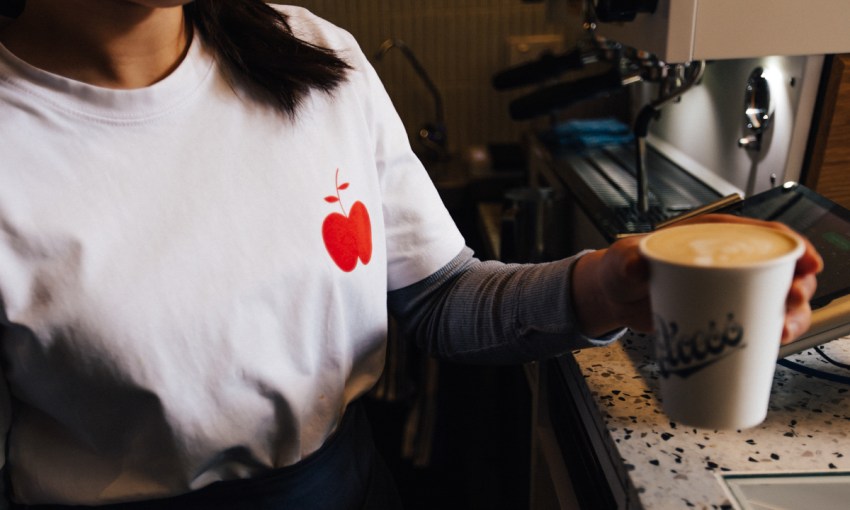 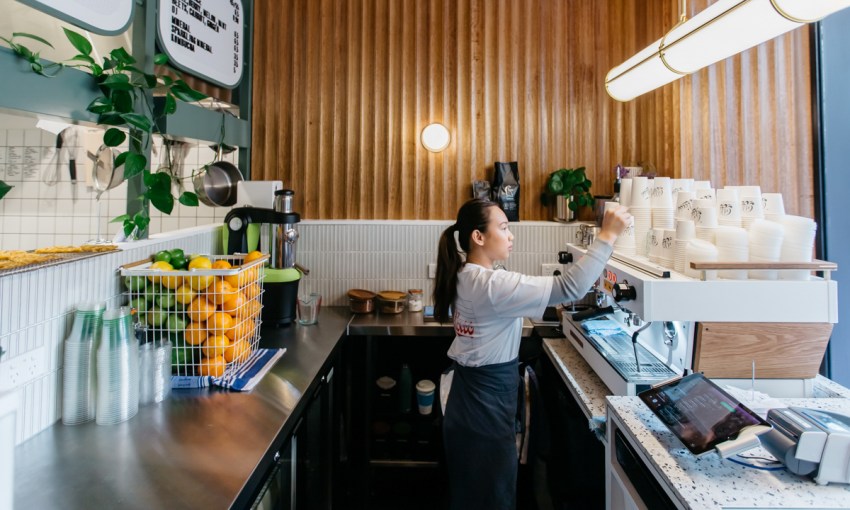 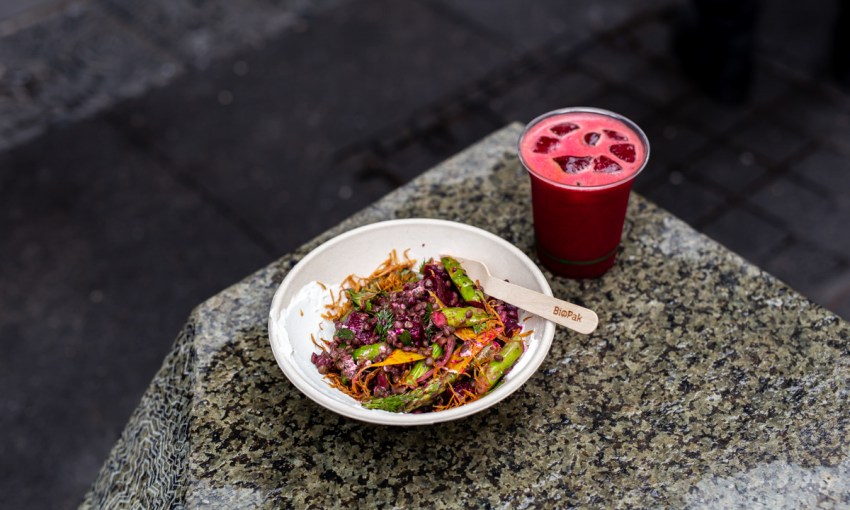 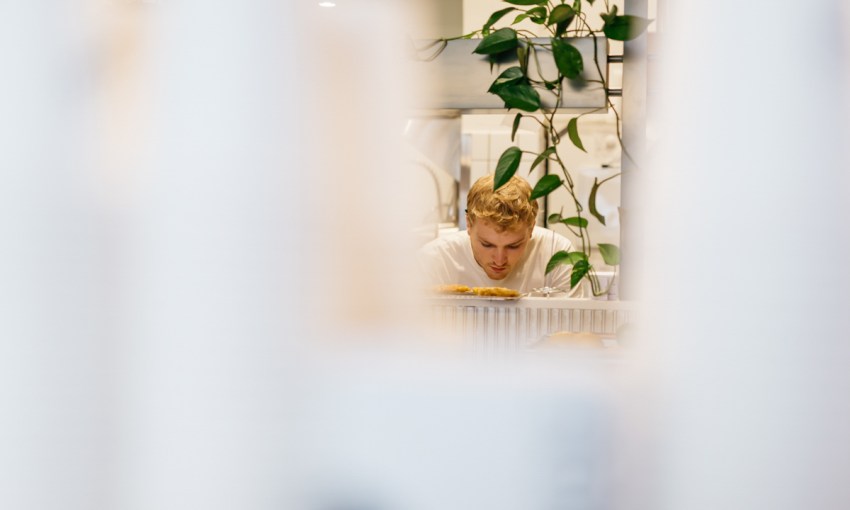 The timber hoarding is gone, the roller door is up, and Recess is officially open for business on Bank Street, having quietly opened Friday last week.

Billed as a modern-day tuckshop, the concept comes from the founders of Bank Street Social, Shaun Campbell and Simon Orders, with a menu designed by new recruit, former London-based chef Harry Wilson, in collaboration with chef consultant Carlos Astudillo.

Extended summer trading hours will be announced at a later date.

There is coffee on offer – SOHO Roaster’s Dark Horse blend, double-shot pours as standard and all the milk alternatives you could hope for – as well as fresh-pressed juices and a concise food menu that will rotate regularly.

The menu has already changed and adapted in this first week of trade, Harry tells us, and on the day we visit there is an egg and bhaji breakfast naan (highly recommended), haloumi and pumpkin sandwich, and three different salads.

All the menu items are vegetarian, but the venue isn’t strictly following that line. The primary focus is to provide a healthy (but still quick) alternative to the fast food options in the surrounding area.

“We’re not going to keep it vegetarian, but we’ll probably shy away from beef and the big, bulky meats. We might bring in some chicken, or some fish. Just keeping it loose. We’re also going to see how people react,” Harry says. 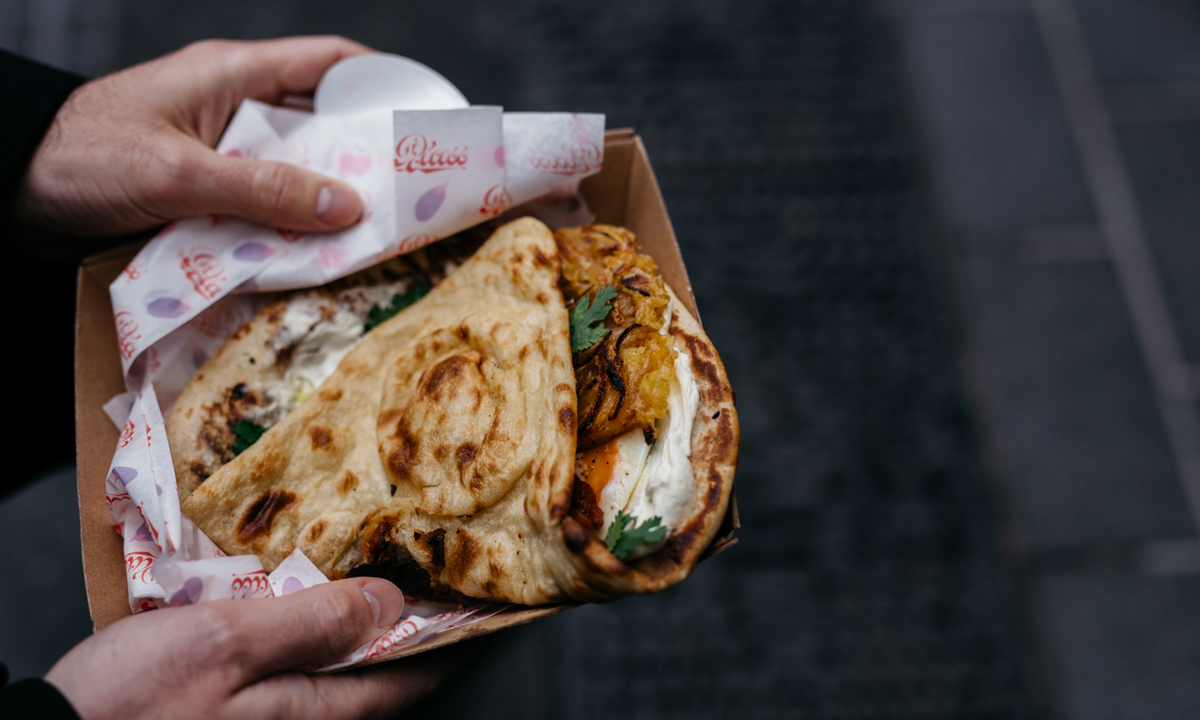 The shop has no façade but for the completely retracted roller door hidden behind a small patch of green tiles and the Recess logo (designed by Peculiar Familia). The open service counter is recessed back (geddit?) from the street so travellers can cut out of the stream of pedestrian traffic to order breakfast, lunch and/or coffee.

There is also a sightline through to the kitchen at the back, to communicate to passers- and stoppers-by that your meal is being dutifully prepared for you, made fresh to order, and has not been shipped in from an offsite kitchen elsewhere.

The team has also made use of Bank Street Social’s wood oven, with the naan made in-house.

Recess will have a small outdoor seating section in about a month, and come summer they will also extend their hours into the evenings for knock-off drinks.

“Just taking advantage of the fact we’re from a bar background,” Shaun says.

“We’re going to have a nice little street presence, a place for people to grab a glass of wine on the way home back down to the train station.

“We’ll have a separate menu, it’ll be real small, just a couple of beers, couple of wines, maybe a cocktail.”

For the time being, Recess will open at 7am and close at 4pm Monday to Friday. 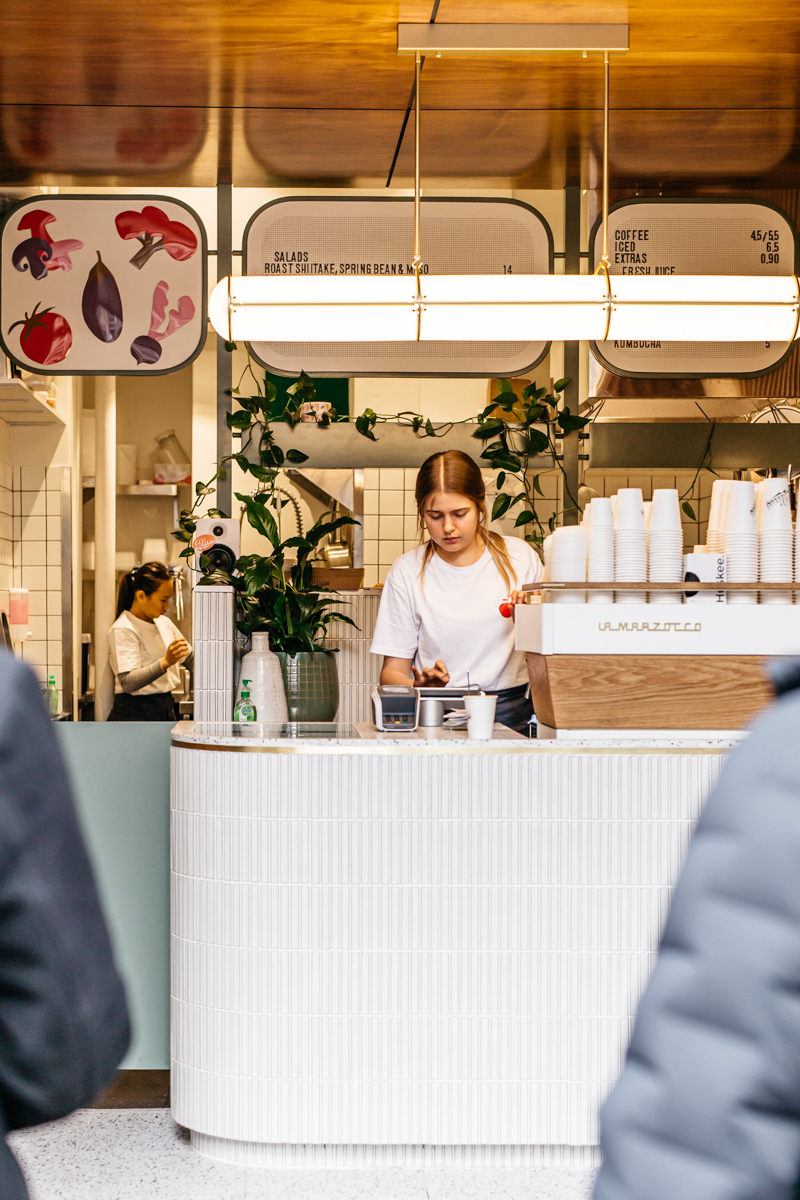 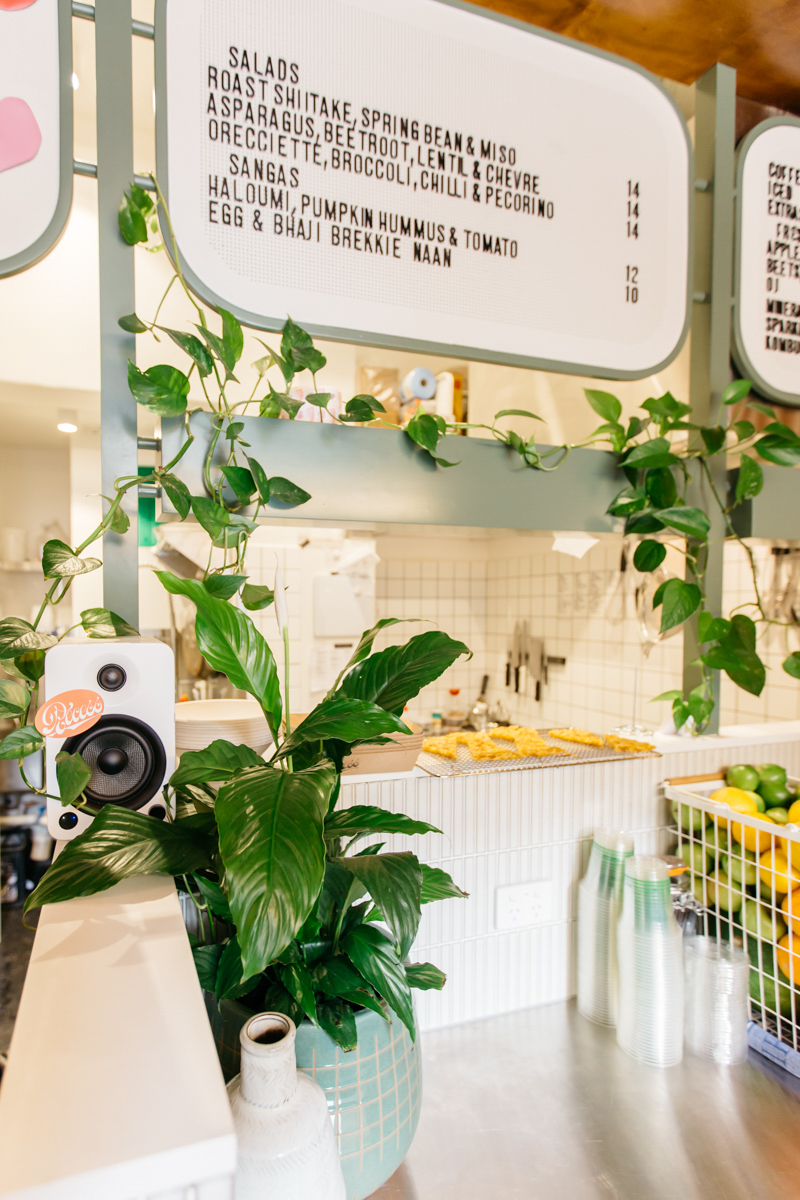 Above: Foliage + phono; Above right: A mid-morning vibe

The project demonstrates the continued investment current and former small-bar operators, like Shaun and Simon, who started on a small venue licence but moved up to an entertainment venue licence soon after, are willing to make to improve the built environment of the CBD.

“Working with Sam [Cooper, Sans Arc] during the design process was great, because he really understood the brief and the nature of the small space,” Shaun says.

“We wanted to bring a real premium finish to the space, both for the business and as an investment in the street.

“I hope [more people do the same], because it’s good for the city.”

“The place isn’t that far off becoming a precinct,” Simon continues.

“There’s so many coffee places that it’s hopefully a destination for coffee, with the amount of choice. They’ve done the street, it’s going to be like a mall almost. It’ll become a destination, I think, not just a thoroughfare.” 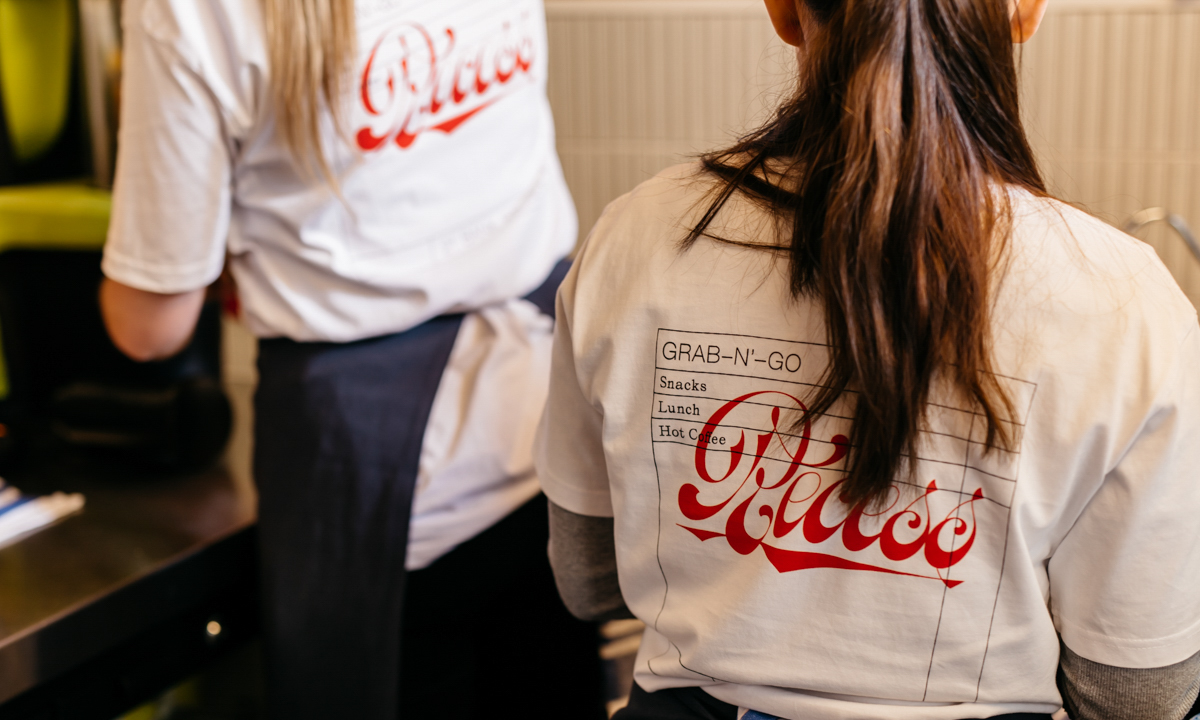 For Harry, moving to Adelaide presented an opportunity to be part of what he sees as an “emerging food scene.”

The chef is a born Adelaidean but moved to London as a kid, where he has lived for the last 12 years and where he was most recently working at Xu, a Taiwanese restaurant part of the  JKS Restaurants group.

His first Australian cheffing gig was in Orana’s recent Sydney pop-up, which he got by messaging the restaurant over Instagram, and soon after applied for the position at Recess.

“I’d messaged them on Seek, and I was like, ‘Shit, loads of people will be doing this.’ So I did Instagram again, and it just seems to work. As a chef, it’s a great communication tool,” Harry smiles.

“[The concept] made me think of the London street food scene, where people are grabbing stuff made by some of the best chefs in town, or people who really, really know what they’re doing, from Afghanistan – like mama’s cooking, traditional food, and it’s kind of the best food you can get, really, but not for restaurant prices, and not in a stiff setting.

“In my mind, that’s why it was exciting. We can push the boundaries of lunch and breakfast.” 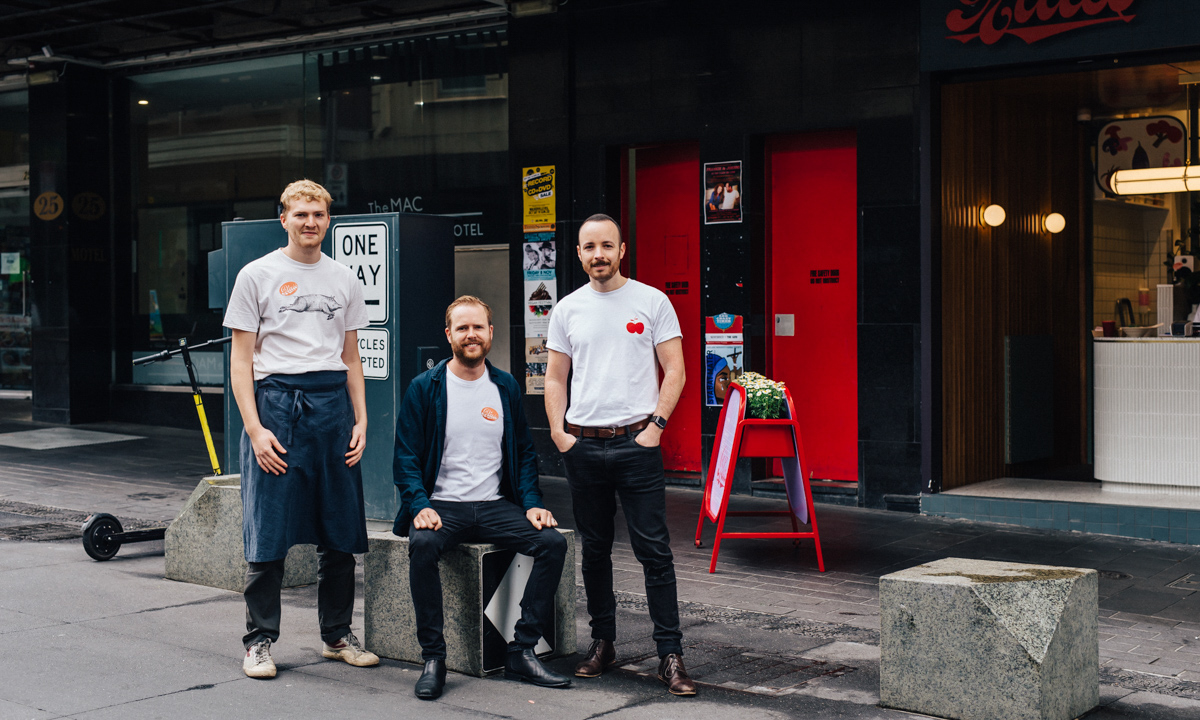