Stefan Iannace has grown his coffee cart Cheeky Grin from a shed pop-up to a go-to corner store by listening and reacting to what his local Firle community wants.

Stefan Iannace, founder of Firle café Cheeky Grin, admits to being an impulsive person in most aspects of his life.

This attitude has served Stefan well throughout his hospitality career.

As a young worker, he trained up inside a fast-food conglomerate, where he learned the benefits of setting and rigorously maintaining procedures.

The company put him through a management course, but he wanted to see what other options were available, so he joined his uncle’s transport industry – briefly.

“Wasn’t really my thing,” he laughs. “Sitting in a fridge all afternoon. Nah.”

He jumped back into hospitality, working for Cibo TTP, where he fell back in love with service, and with coffee.

From there, Stefan bounced around coffee shops, picking up additional hospitality skills – in service, management and making coffee.

This saw him take roles at additional Cibo stores, Mercato, Nutrition Republic (where he managed three stores), and SAHA.

By 2019, he’d garnered enough experience to consider starting something of his own. He decided on an events-focussed mobile coffee cart.

This was the first iteration of Cheeky Grin, which lasted two events before the COVID-19 shutdown.

“I was really down on myself – especially because I wasn’t working,” he says.

Cleaning out the shed at his house one day during lockdown, Stefan moved the coffee cart into the driveway.

It caught the eye of his house-bound neighbours while they were out for a walk.

Stefan had been considering ways to keep Cheeky Grin active while events were out of the question. This felt like a strong enough sign.

“We did a letterbox drop on the Saturday night, opened up on the Sunday… and it was just flat stick,” he says. 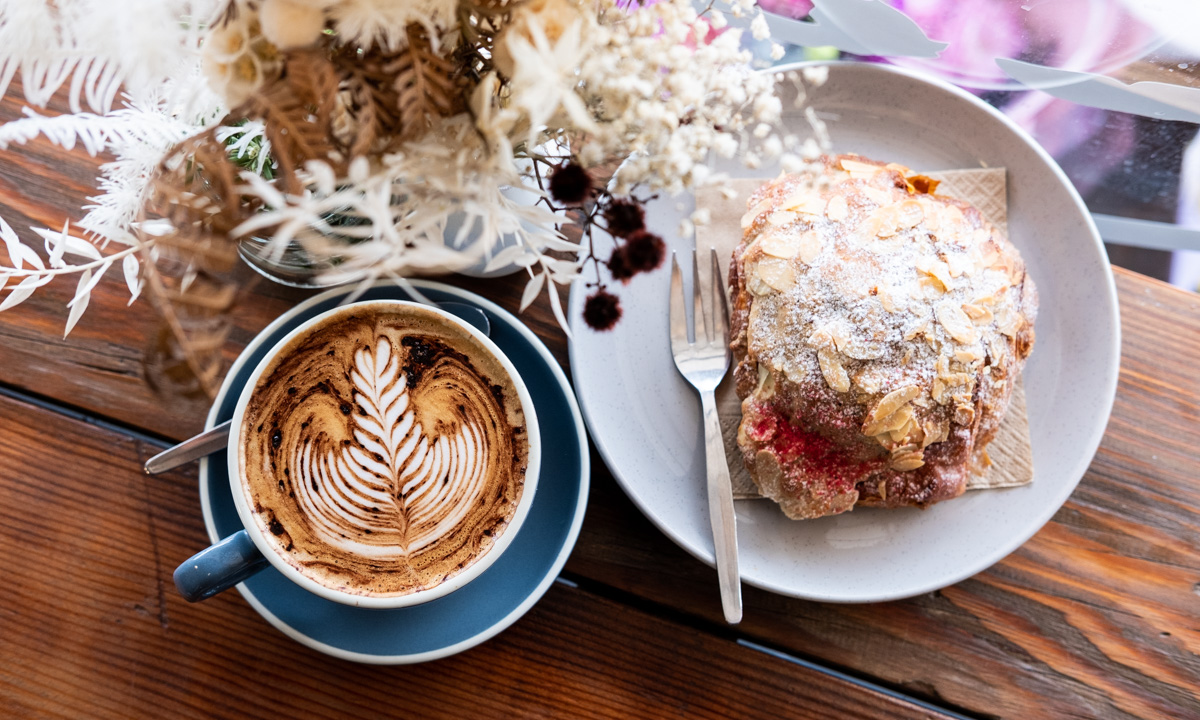 Coffee courtesy of Willow Bend and pastries from Prove

The shed pop-ups were fast-paced and fun, and Stefan built on the momentum, landing a lease at a shopfront a few blocks over.

Key to Stefan’s success has been a keen ear for what his customers want.

Cheeky Grin’s bricks-and-mortar store launched with a range of bagels – a foodstuff Stefan had a personal interest in.

But his clientele had other ideas.

“That worked for the first month, and then… people were like, ‘I like the ingredients, but do you have toasties?’” he says.

“I was doing my version of a reuben but in a bagel. I was like, ‘Alright, we’ll switch it.’ We took it out of a bagel and put it in a toastie. Bang – sales went crazy.”

Through taking on board his clientele’s suggestions, Stefan has added sourdough loaves, cartons of milk and bouquets of flowers to Cheeky Grin’s offering.

He hopes for his patrons to see Cheeky Grin as more than a place to stop in for coffee.

“For me, it’s not about necessarily making money, it’s just giving people another service and becoming like an old-school corner deli,” he says.

Cheeky Grin continues to evolve. There are plans in the works for expanding into night trade when summer rolls around again.

“We’ve got a big back area, I want to do Sunday sessions – big paella pans, some live music, get some beers on tap or something like that,” Stefan says.

“We’ve done, for the general public, coffee 101, how to make a latte. That was a big hit on our first one, so we’re in the middle of putting another one through.

“We’re looking at getting a winemaker in, a cheesemaker, pairing three wines, three cheeses, and really giving back and showing we’re all about supporting the little guy.”

Cheeky Grin is located at 74a Gage Street, Firle, and opens six days a week, from Wednesday to Monday.